The Photo That Changed The Face Of HIV/AIDS 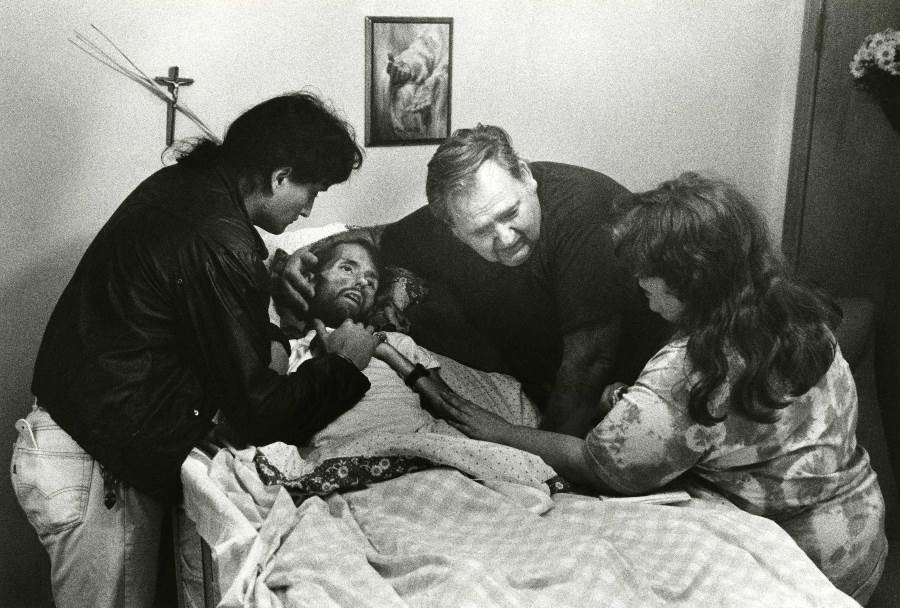 Nearly 25 years ago, David Kirby lay on the cusp of death. Kirby, 32, had nearly reached the end of his fatal fight against HIV/AIDS when journalism student Therese Frare took the photo seen above.

In the photo, Kirby’s gaze appears vacant; he is a man resigned to a fate that his family–also broken by HIV/AIDS–just cannot bring itself to see. For many, the raw anguish radiating from this photo exemplified the tragedy of the HIV/AIDS epidemic, which at this point in time had struck millions around the world.

The photo, which was later published in Life and then used by clothing company United Colors of Benetton in an advertising campaign, is said to have changed the face of AIDS.

When published, public understanding of HIV/AIDS was minimal. Many thought the disease confined its victims to those who identified as homosexual; few considered the damage it inevitably inflicted on an AIDS victim’s family. This photo helped change that.

Frare recently sat down with Time to discuss the photo, and her memories of living through–and documenting–a span of years that devastated countless families. We provide an excerpt below:

“I started grad school at Ohio University in Athens in January 1990. Right away, I began volunteering at the Pater Noster House, an AIDS hospice in Columbus. In March I started taking photos there and got to know the staff — and one volunteer, in particular, named Peta — who were caring for David and the other patients.

On the day David died, I was visiting Peta. Some of the staff came in to get Peta so he could be with David, and he took me with him. I stayed outside David’s room, minding my own business, when David’s mom came out and told me that the family wanted me to photograph people saying their final goodbyes.

I went in and stood quietly in the corner, barely moving, watching and photographing the scene. Afterwards I knew, I absolutely knew, that something truly incredible had unfolded in that room, right in front of me.

Early on, I asked David if he minded me taking pictures, and he said, ‘That’s fine, as long as it’s not for personal profit.’ To this day I don’t take any money for the picture.

But David was an activist, and he wanted to get the word out there about how devastating AIDS was to families and communities. Honestly, I think he was a lot more in tune with how important these photos might become.”

Next, check out our other articles on Kevin Carter, the photojournalist tormented by his best known work and the most interesting diseases in human history.