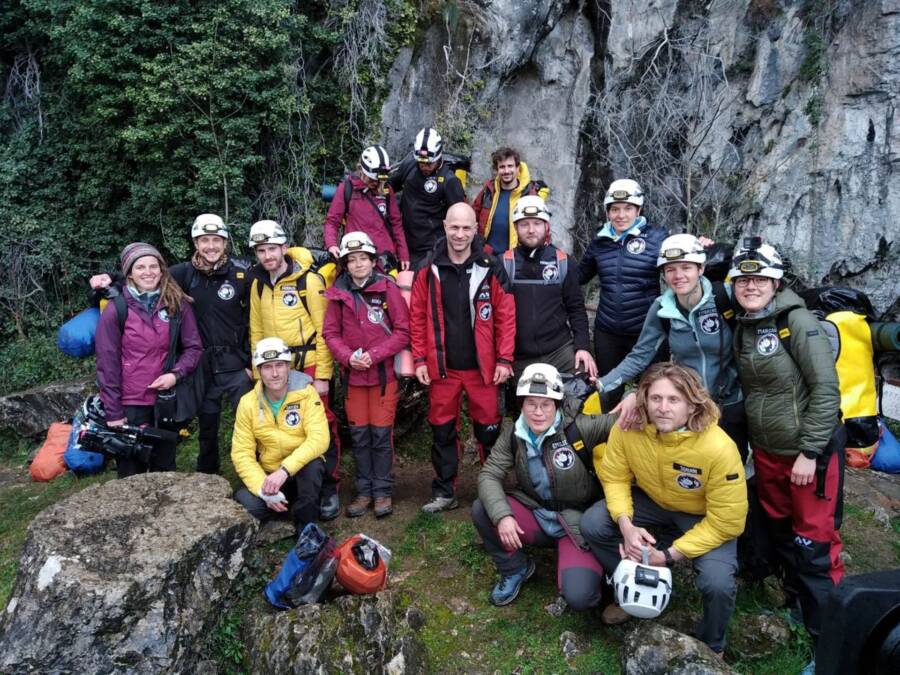 FacebookParticipants between the ages of 27 and 50 were all deemed physically and mentally fit before descending into the cave.

The past year’s pandemic-related quarantines have taught billions of people around the world what varying stages of isolation feel like. However, none of that seems comparable to the so-called Deep Time experiment now underway in France. While much of the world stayed locked down in their homes on March 14, a group of 15 volunteers entered the Lombrives Cave — not to emerge for 40 days.

Researchers hope the study, unfolding in the rural region of Ariège, will shed new light on how human beings process the passage of time without natural factors to gauge it, according to IFL Science. In addition to a complete lack of sunlight, these eight men and seven women have been left without phones or watches. Furthermore, they’re relying on a pedal-driven dynamo to create electricity in order to see anything inside their cave.

The experiment was the brainchild of French-Swiss explorer and writer Christian Clot, and was directly inspired by the long-term isolation many experienced throughout the COVID-19 pandemic.

“This experiment is a world first,” said neuroscientist and professor Etienne Koechlin. “Until now, all missions of this type focused on the study of the physiological rhythms of the body, but never on the impact of this type of temporal rupture on the cognitive and emotional functions of the human being.”

AFP News Agency footage of Christian Clot and his volunteers descending into the cave.

Each participant was cleared and found to be in stable physical and mental health before the experiment began. Participants’ ages range from 27 to 50, while their professions run the gamut, as well. From biologists and jewelers to primary school teachers, all are now equal inside the cave.

The group’s occupations were selected to reflect the realities of the cave, with experienced biologists and curious teachers, after all, likely making for a capable team.

Around four tons of supplies were hauled in beforehand. While the dynamo is capable of providing volunteers with artificial light, they’ll have to harvest water from the cave itself in order to stay hydrated — and alive. Fortunately, food was part of the stockpile that subjects were given before entering.

Meanwhile, everyone has been fitted with a host of sensors to deliver data to researchers on the outside. Clot and his team are eager to witness how the mind will respond to losing all sense of time.

“Losing time is the greatest disorientation there is,” Clot said. “To this day, we do not know how our cognitive system understands and manages this indefinite continuity, this environment where the succession of events and phenomena takes place …”

A participant himself, Clot is no stranger to pushing limits. The explorer has long been curious as to how extreme environments impact a person’s physical functions and mental perception. He has also joined 30 major expeditions to regions including the Chilean Cordillera Darwin mountain range. 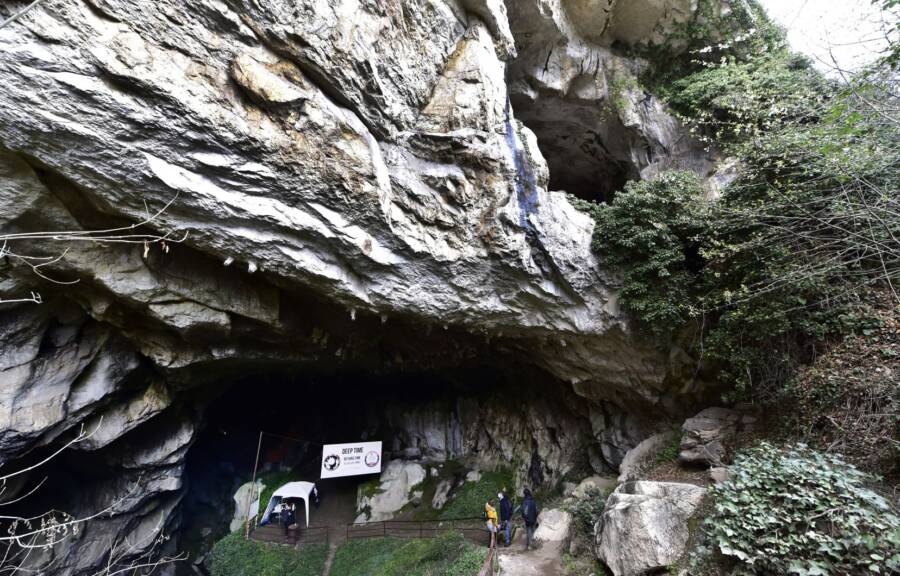 TwitterVolunteers have been provided with food and equipment, but will have to harvest any water from the cave itself.

Conditions within the Lombrives Cave have been carefully calibrated. Researchers have ensured that temperatures where volunteers spend most of their time remain at 54 degrees Fahrenheit, with the humidity at around 95 percent. Each volunteer will have to adapt to these on their own, and dress to their own comfort.

“Three separate living spaces have been fitted out, ” said Clout, “one for sleeping, one for living, and one for carrying out studies on the topography of the place, especially the flora and fauna.” 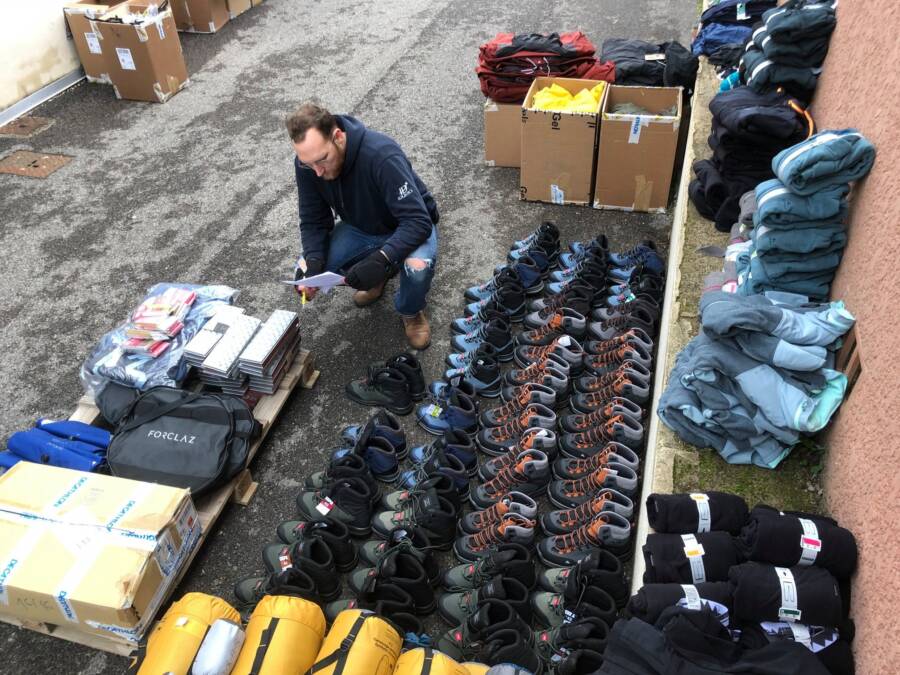 FacebookChristian Clot’s colleague, pictured during preparation for the 40-day experiment.

“Clad in sensors, with the most up-to-date research tools at their disposal, participants will undertake a comprehensive and rigorous study protocol to assess how their brains and bodies manage and generate a new time synchronization, space and society,” Deep Time researchers told The Connexion.

The team essentially hopes to learn how people’s cognitive functions differ when the brain can’t perceive time without otherwise natural tools to gauge it. Sleep rhythms and general functioning will be studied, and Clot said he also looks forward to seeing how volunteers are affected emotionally, and whether long-term effects may linger.

Lastly, Clot hopes to learn how a group relegated to darkness and isolation organizes itself — both socially and within the physical space itself. 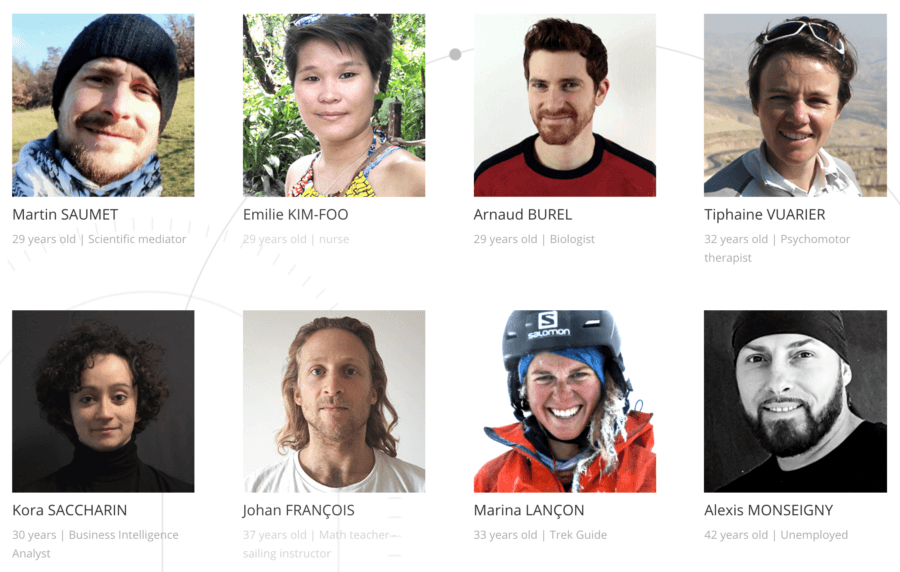 Deep TimeProfessions of each volunteer run the gamut, from nurse and biologist to school teacher to unemployed.

“The conquest of space takes a new turn during this century, enabled by new technologies and rising figures,” according to the Deep Time website. “From the Moon to Mars, by targeting other stellar objects, such as Ceres, humans will face new perceptions of time.”

Clot’s critics, many of them in the French media, have deemed him an overly ambitious amateur with no scientific background. On the other hand, numerous research institutes and laboratories from France, Switzerland, and China have supported the endeavor. The resulting data, meanwhile, will purportedly be shared with everyone around the world.

As it stands, all 15 volunteers are sealed inside for another 35 days. Hopefully, they emerge from the darkened depths without a scratch on April 22 — and bring something back worth sharing with us all.

After reading about the “Deep Time” experiment, learn about the 7 most terrifying experiments ever conducted. Then, read about the Stanford Prison experiment.