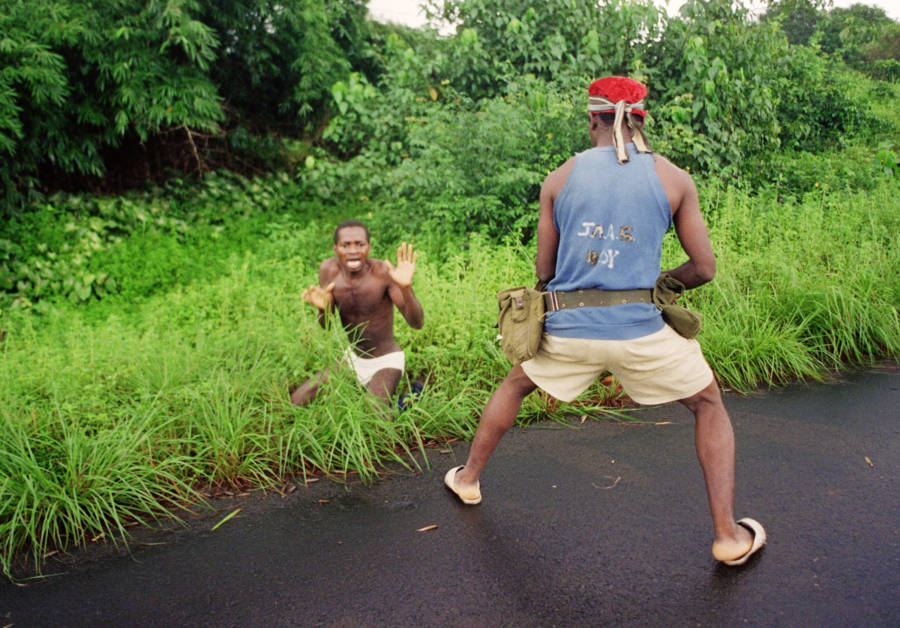 The country’s demographics are at the heart of its problems. Liberia was set up in the early 19th century as a convenient place for the United States to send its freed slaves, on the apparent principle that non-enslaved blacks were best appreciated at a distance.

These colonists, who had been born in the United States and didn’t know the first thing about Africa, immediately started dying from local diseases and the inevitable turf wars with inland tribes.

The U.S. responded by sending more deportees, until the whole stretch of coast had a population that was split between the “wealthy” five percent who descended from U.S. stock and the 95 percent who come from the interior and who have hated them since the first boat landed.

One of those resentful inlanders, an ambitious Krahn tribesman named Samuel Doe, who held the rank of master sergeant in the army, seized power in April 1980. Within days of his coup, while government ministers (all American-descended) were marched around naked in public and executed, Doe declared himself interim president until a new government could be democratically elected.

That election never happened, and it’s possible that Doe didn’t understand that in order to restore democracy, you have to actually step aside and let somebody else be in charge. 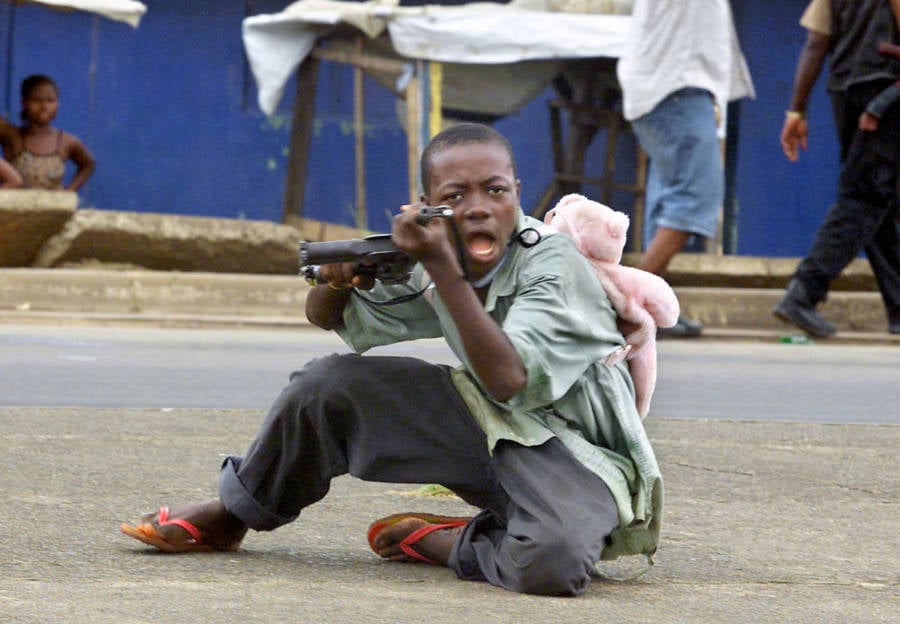 GEORGES GOBET/AFP/Getty ImagesA child soldier points his gun at a photographer in a street of Monrovia on June 27, 2003, not long after Liberian President Charles Taylor’s forces took control of the city.

Many books could be written about Doe’s reign of madness, but it’s enough to know that his chief spiritual advisor — the Billy Graham of Liberia, if you will — was a teenage boy named Joshua Blahyi, who was ordained a high priest at age 11 and who claimed to practice human sacrifice and cannibalism.

Nevertheless, Doe respected the trappings of Western civilization, but may not have grasped all of the nuances. After seven years of insisting on being addressed as “Dr. Doe,” for example, he proudly announced to his nation that he had earned a Bachelor’s degree from the University of Liberia.

Eventually, the long-promised election of 1985 saw him win with a respectable 51 percent, but there were hints that all was not quite aboveboard with the election; the ballots, for example, were counted in guarded warehouses where the only observers allowed were Doe’s personal staff.

He also seems to have murdered around four dozen of his political opponents during the campaign. Plus, he retroactively changed his year of birth from 1951 to 1950 to meet the presidential age requirements of the new constitution, which he had written himself. 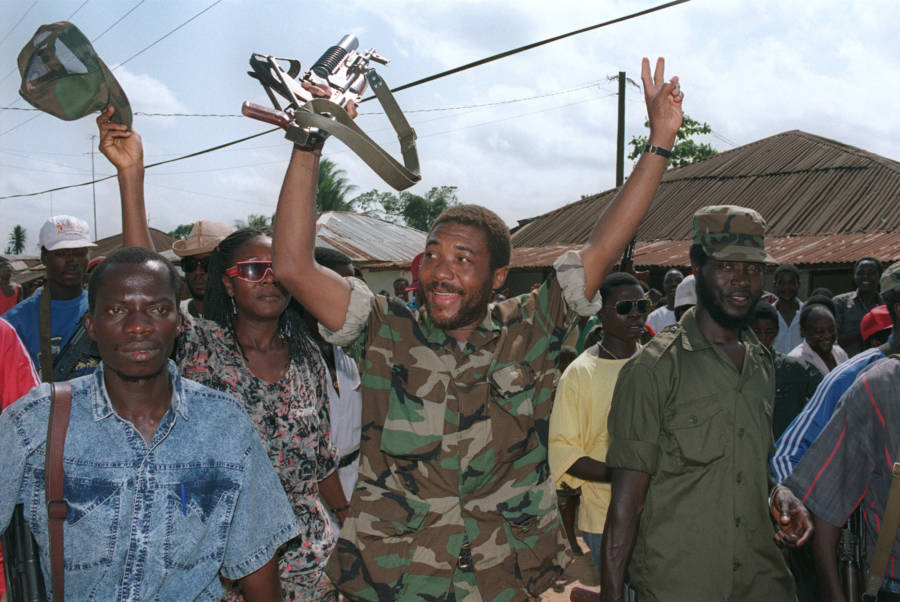 PASCAL GUYOT/AFP/Getty ImagesRebel leader Charles Taylor (center) celebrates with troops in Roberts Field on July 21, 1990 after taking over this position from government troops of President Samuel Doe near the Liberian capital earlier that week.

All of this came to a head in 1990, when a rebel commander named Prince Johnson captured Doe alive. The day after the capture, which saw 80 government ministers shot, Johnson had himself filmed sipping a Budweiser and calmly watching as his troops tortured Doe to death.

After this, Doe was dragged into a public street. To prove he wasn’t a sorcerer — which seems to have been a concern — Johnson’s people mutilated his corpse, buried it, exhumed it, beheaded it, and then buried it again.

That’s when Johnson’s former commander, Charles Taylor, who had recently escaped from an American prison and made his way back to Africa, took to the streets in a counter-coup that turned into a civil war. 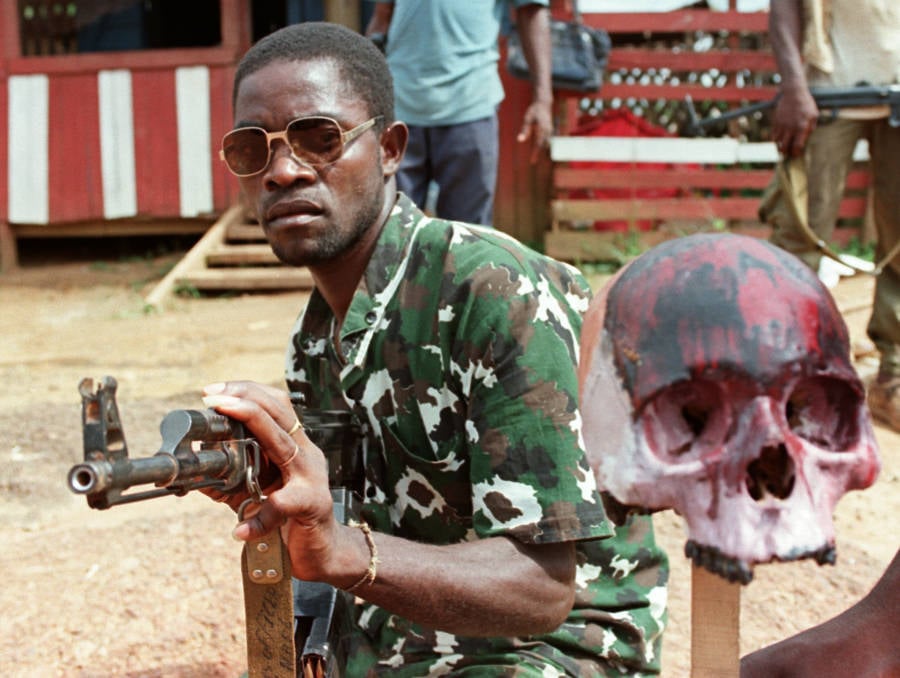 PASCAL GUYOT/AFP/Getty ImagesA rebel loyal to Charles Taylor poses next to a painted scull of a Krahn ethnic soldier of President Samuel Doe on May 15, 1990 in Monrovia.

For the next six years, all hell broke loose in Liberia. Even the 19-year-old Joshua Blahyi, the cannibal high priest of Doe’s reign, got into the act.

Calling himself General Butt Naked, Blahyi recruited a small army of other teenagers to fight, which they did completely naked except for women’s shoes and fright wigs. Their specialty was playing soccer with the decapitated heads of their victims and — according to Blahyi, who is now a Baptist minister — occasionally sacrificing children to Satan.

Liberia settled down for a few years in the late 1990s, only for another war to flare up a few years later. The coup, which became a civil war, which became a second civil war, ended in a peace treaty in 2003 and elections in 2005. Liberia is still quiet and democratic to this day, though 85 percent of its people live below the global poverty line.