If you can believe it, many American women initially did not want the right to vote. Here are some of their own reasons why. 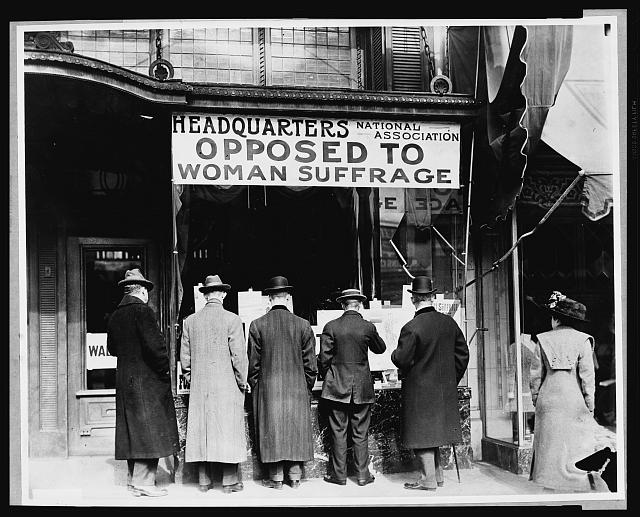 Library of CongressThe headquarters of the National Association Opposed to Woman Suffrage, 1911.

Feminism has come a long way since the early 1900s. If you need proof, look no further than one pamphlet from the National Association Opposed to Woman Suffrage.

The organization was, interestingly enough, founded by a woman. Josephine Jewell Dodge believed that the average housewife was “worthily employed in other departments of life, and the vote will not help her fulfill her obligations therein.” Dodge also feared that a change in the law would give more power to progressive cities, which she considered “undesirable and corrupt.”

Armed with this logic, she and her group of followers crafted these six reasons to keep women out of the voting booth:

2. “It means competition of women with men instead of co-operation.”

3. “80% of the women eligible to vote are married and can only double or annul their husband’s votes.”

4. “It can be of no benefit commensurate with the additional expense involved.”

5. “In some States more voting women than voting men will place the Government under petticoat rule.”

6. “It is unwise to risk the good we already have for the evil which may occur.” 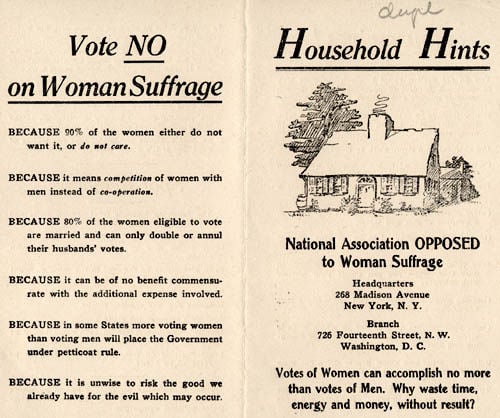 To further underline their point, the group included sassy housekeeping tips in the same pamphlet.

“Control of the temper makes a happier home than control of elections,” the authors chided alongside suggestions for cleaning paint and boiling fish.

They even included a handy tip for murdering a suffragette: “If an Anti swallows bichloride, give her whites of eggs, but if it’s a suff, give her a vote.” 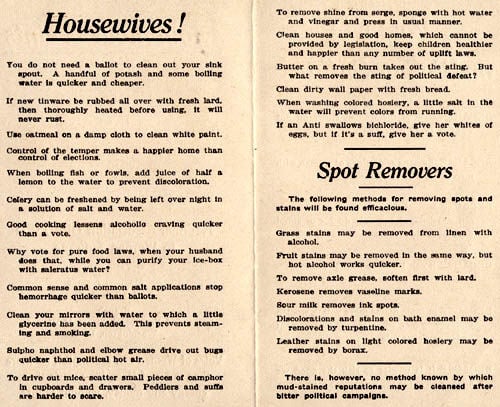 The pamphlet from the National Association Opposed to Woman Suffrage suggested that these cherished skills of cleaning walls, removing grease stains, and freshening celery would never be learned if women were distracted by “political hot air.”

And though the authors seemed to know how to clean basically anything, they had no idea how to sanitize a reputation forever tarnished by political activism.

With such reasoning, it’s surprising that the 19th Amendment giving women the right to vote ever made it through Congress in 1920. After all, why would anyone want to vote when they could spend their days rubbing walls with fresh bread?

Next, read about Jeannette Rankin, the only woman in Congress at the time of the vote for national women’s suffrage. Then, learn the story of the women of the Petticoat Revolution, who took over an Oregon town 100 years ago.