The "shoot-on-sight" policy at India's Kaziranga national park saw more poachers killed by guards than rhinos killed by poachers in 2015. 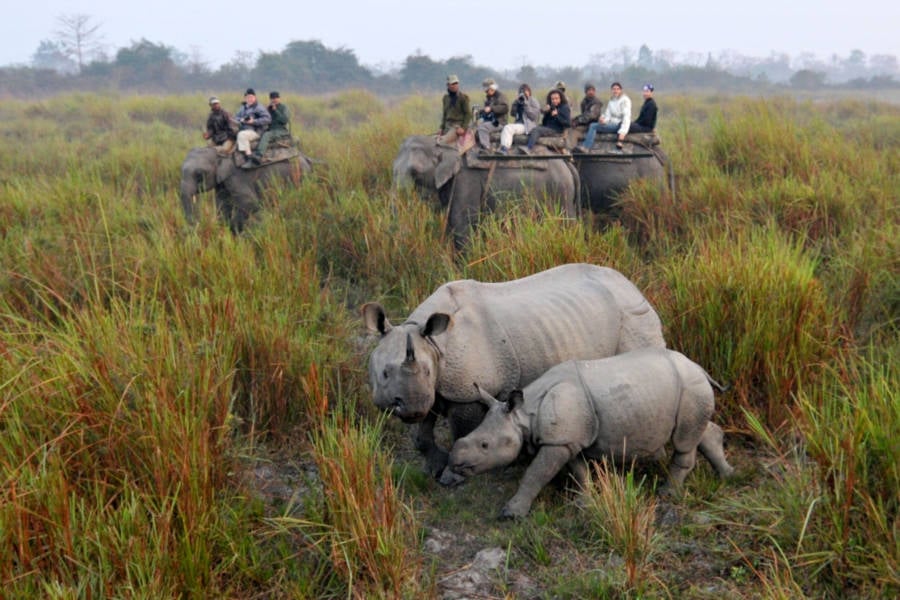 STRDEL/AFP/Getty ImagesTourists photograph a rhinoceros with her calf at Kaziranga National Park on February 21, 2012.

Thanks to the rising cost of rhino horns on the illegal black market, rhino numbers are plummeting throughout Africa and Southeast Asia. However, the rhinos at Kaziranga, a national park in northeastern India, are thriving.

A new BBC feature investigation has found that this is thanks to the park’s controversial standing orders to kill poachers caught in the park, an aggressive policy that may be as effective as it is bloody.

Park rangers shot more than 20 poachers in 2015, thus killing more poachers than poachers killed rhinos for the year. National park officials allow park rangers to “shoot-on-sight” if they come across any of them.

According to Quartz, the forest department in India has always been a militarized service, with park rangers wearing uniform-style khakis, carrying guns and gadgets such as drones, and having the authority to prosecute any offenders.

The government defends this policy by pointing out that local crime syndicates are frequently involved in the illegal wildlife trade and escalate the situation in ways that could cost lives.

Still, the BBC accuses the park rangers of carrying out extrajudicial killings: when governmental authorities kill people without any judicial process or legal proceeding involved.

Without such due process in place, things can quickly spiral out of control. The BBC thus cites critics who say that the need to protect endangered species is conflicting with the rights of the people who eke out a survival around the national parks.

Groups such as Survival International, which was featured by the BBC, say that good-intentioned conservation projects often deny and undermine indigenous rights across the globe.

There is a historical context for this as well. Many of India’s national parks have a colonial legacy, with government authorities preserving the forests for the elites who ran the former British colony. These land-use distinctions did not consider the rights of the people who were already living there.

A 2006 piece of legislation known colloquially as the Forest Rights Act sought to rectify this by restoring individual and community rights to land use based on historical evidence. However, some say that Kaziranga’s shoot-on-sight orders have violated this edict.