From its apocalyptic artwork to its network of underground tunnels, conspiracy theorists are certain that the Denver Airport is hiding something.

Conspiracy theorists have linked the Denver International Airport (DEN) to the Illuminati, Freemasons, and shadowy government operations for decades. And its bizarre murals, gargoyles, and ominous horse statue — which accidentally killed its creator — have certainly given them plenty of material.

The Denver Airport conspiracy theories started when the facility was under construction. Billions over budget and an entire year behind schedule, some became convinced that DEN’s delayed 1995 opening was caused by something more nefarious than the usual difficulties facing large public works projects. 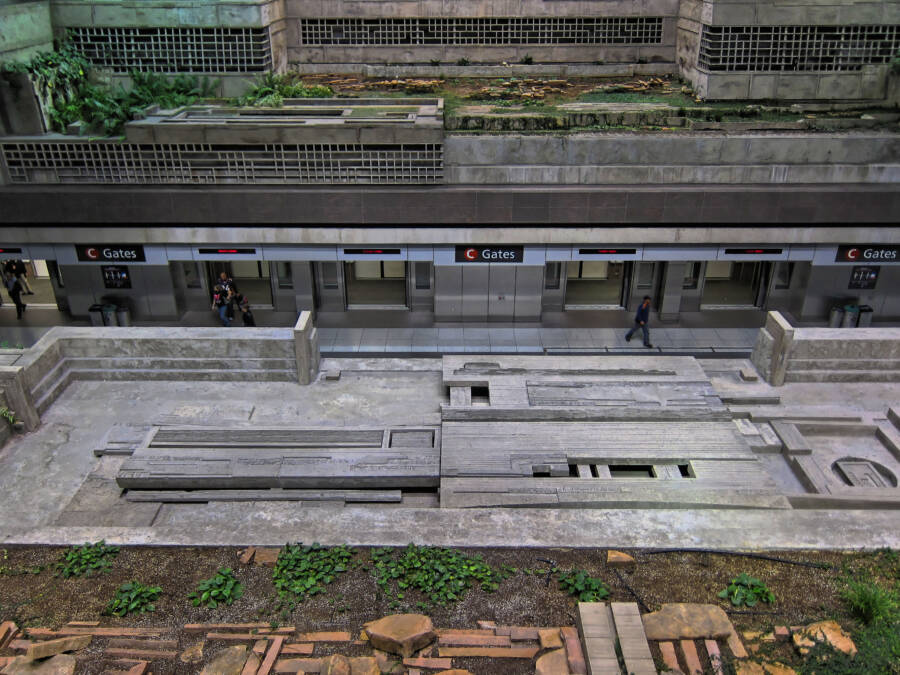 FlickrDEN is littered with enthralling architecture and design. Many believe the six underground levels beneath the airport contain sophisticated shuttles to far-away bases exclusively built for elites with secret clearances.

The unusual artistic choices and a series of tunnels beneath the airport added fuel to the conspiracy theorists’ fire. From a stone slab bearing the Freemasons’ symbol to runways that look like a swastika, the Denver Airport has no shortage of conspiracy theory fodder.

Could America’s largest airport secretly be a site of occult symbology or a classified doomsday shelter? Here are the theories — and the facts — about this quirky Colorado airport.

Construction Of The Denver Airport

The Denver Airport conspiracy theories began with the building’s bloated budget and prolonged construction. When DEN finally opened its doors on Feb. 28, 1995, it was more than a year behind schedule — and $2 billion dollars over budget.

A quarter of a century later, DEN remains the largest airport in the United States with an area of 53 square miles. It also boasts the longest public use runway in America, with runway 16R/34L nearly reaching three miles long at 16,000 feet. 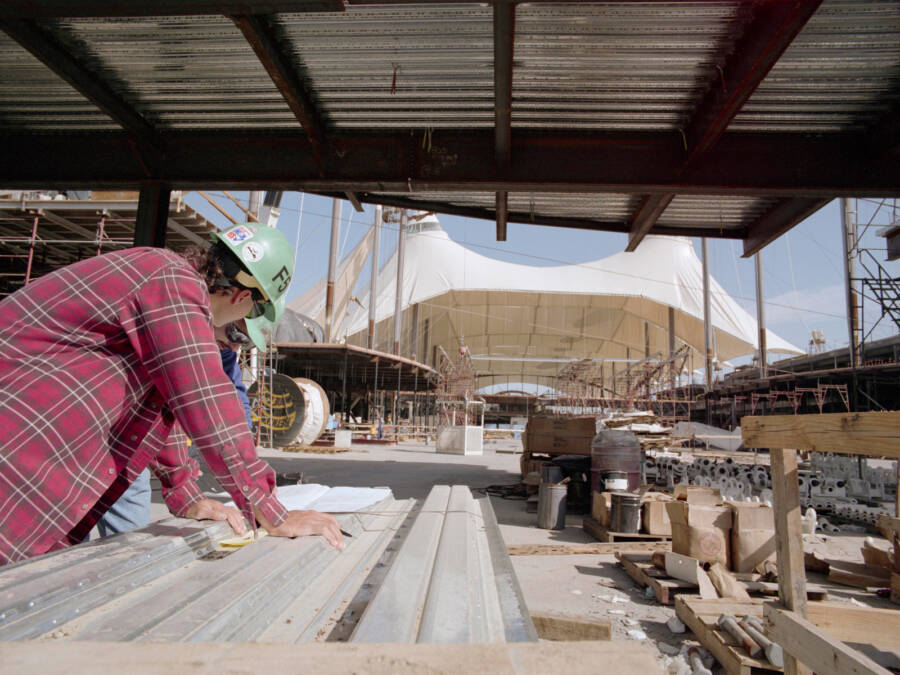 However, the Denver region is also home to a number of military bases and private aircraft corporations — including the Cheyenne Mountain Complex, Peterson Air Force Base, the North American Aerospace Defense Command (NORAD), Boeing, and Lockheed Martin.

Some believe the tunnel system beneath DEN leads to underground bunkers for those with clearance to use in case of global catastrophe — perhaps to NORAD itself, which is 100 miles south of the airport. And the airport’s apocalyptic art has only added to conspiracy theorists’ suspicions.

Among the airport’s 40-piece collection of public artworks is a 28-foot-wide mural by artist Leo Tanguma called “Children of the World Dream of Peace.” The painting depicts a soldier wielding a sword and bayonetted machine gun as distraught children cower at his feet. 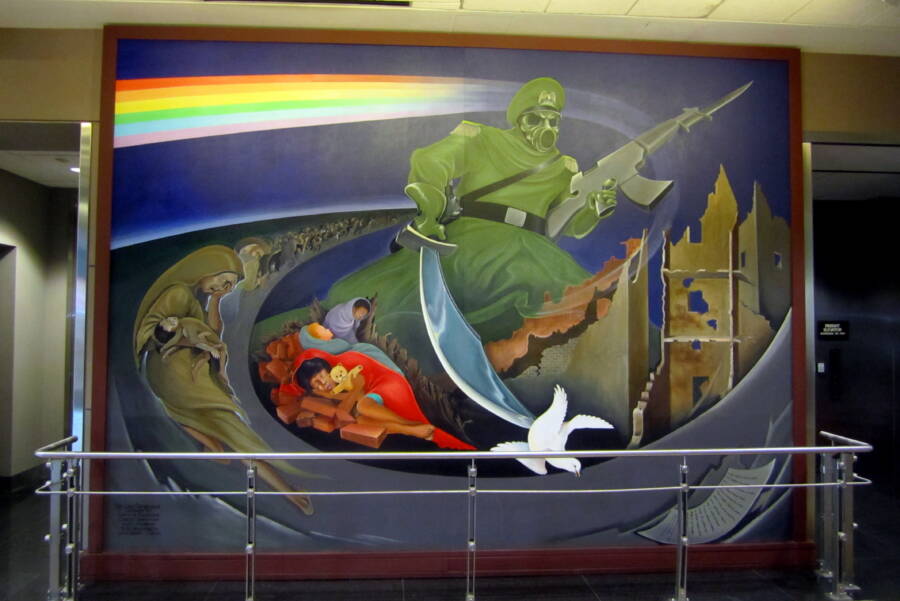 FlickrSome believe the sword in this mural represents a Masonic cult known as the Shriners. Artist Leo Tanguma claims the painting symbolizes all the nations of the world coming together in the wake of a grand catastrophe.

While conspiracy theorists have suggested that the sword symbolizes the Masonic Shriners International cult logo, Tanguma has firmly denied any such links.

Tanguma added that his mural represents global catastrophe bringing “the nations of the world together.” Conspiracy theorists have seen that as a clear sign that the mural is part of a New World Order agenda — in which elites wage purposeful war and chaos to soft-sell a one-world government. 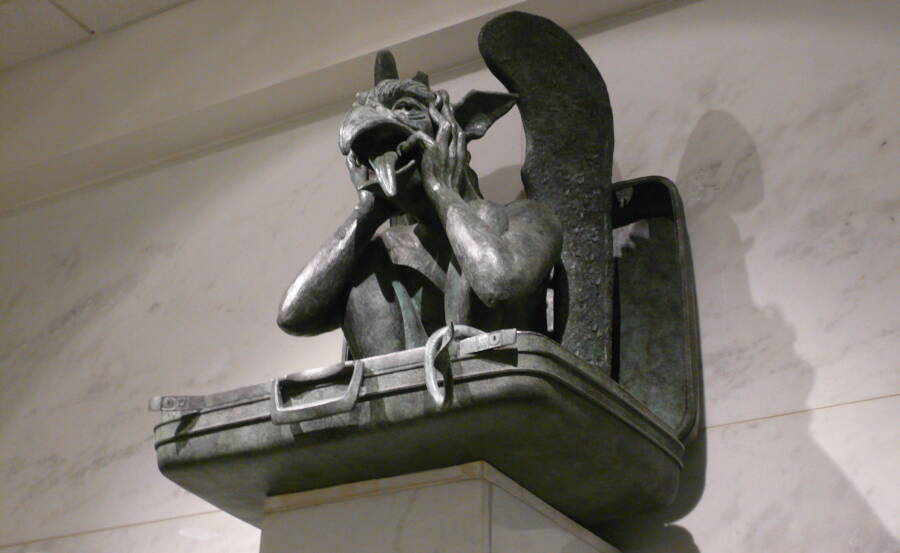 FlickrGargoyles loom over the east and west-end baggage claim areas of DEN.

Like most Denver Airport conspiracy theories, the mural garnered increasing attention following the proliferation of the internet. For DEN officials, rumors like these are merely fun and games. But this mural is hardly the strangest art at DEN. That title belongs to “Blucifer.”

While many are quick to judge conspiracy theorists, it’s hard to deny the strangeness of DEN’s unofficial mascot. Although it’s made from lightweight fiberglass, the 32-foot-tall horse statue weighs 9,000 pounds.

The Blue Mustang, or simply “Blucifer,” has always struck onlookers are eerie. Its glowing red eyes are disconcerting, and some believe the horse symbolizes the Four Horsemen of the Apocalypse. 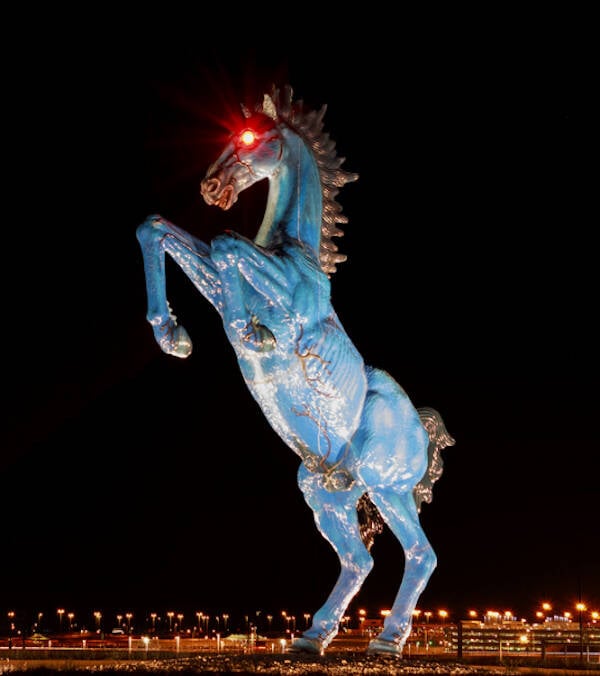 Wikimedia CommonsThe sculptor of the Blue Mustang — also known as “Blucifer” — Luis Jiménez was killed by his creation when a falling piece severed an artery in his leg.

Artist Luis Jiménez said he chose the color in honor of the “wild” spirit of the Old West. In an unsettling twist of fate, Jiménez was killed by his own creation in a freak accident in 2006. Jiménez was struck by a falling piece of fiberglass, which severed an artery in his leg.

Despite the statue’s dark backstory, DEN officials continue to poke lighthearted fun at the notion that something nefarious is occurring at the airport.

“We have a CEO who really embraces the conspiracy ideas,” said Heath Montgomery, senior public information officer for DEN. “We decided a few years ago that rather than fight all of this and try and convince everybody there’s nothing really going on, let’s have some fun with it.”

According to their YouTube page, this chatty gargoyle is here to clear the air on all the conspiracies at DEN.

And “Blucifer” isn’t the only odd sculpture at the Denver Airport. Strange gargoyles watch over the baggage area, and prankish airport officials even had an interactive talking gargoyle installed there in 2019.

“Welcome to Illuminati Headquarters… I mean the Denver Airport,” the gargoyle says in one video.

However, conspiracy theories involving groups such as the Nazis are treated with a more delicate touch.

For the last 20-some years, conspiracy theorists have pointed out that the Denver Airport’s runway layout looks a bit like a swastika. However, the resemblance seems to be nothing but a terrible aesthetic accident.

Furthermore, DEN’s runways aren’t a precise match to the Nazi symbol — but their sheer similarity is still enough to inspire conspiracy theories. 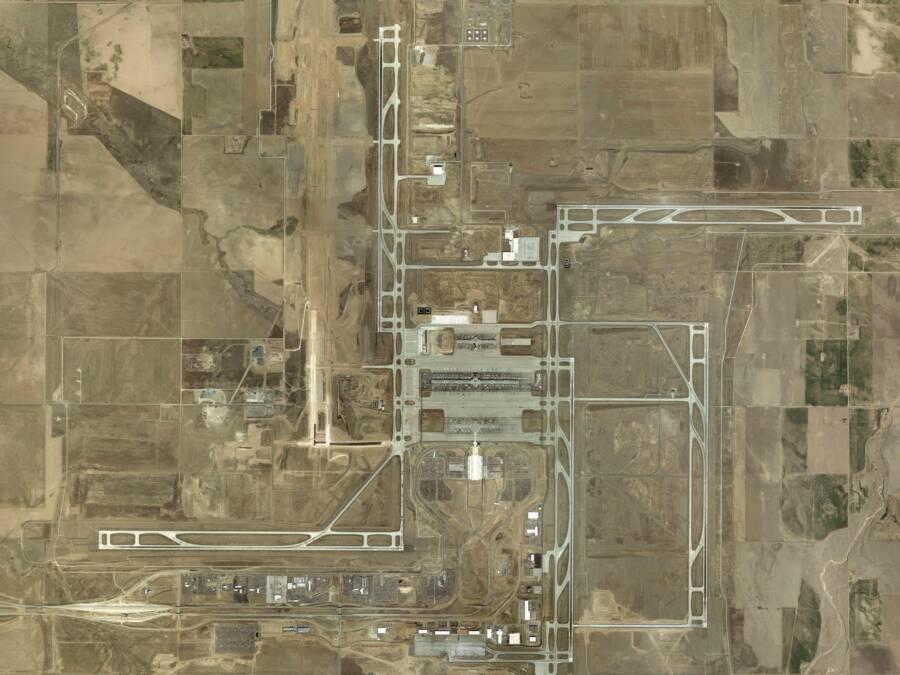 TwitterSome see a blatant swastika at the Denver Airport, while others see only a passing resemblance. The design was purportedly sheerly logistical.

“We do have some subject matter that we wanted to either just avoid or tread very lightly with,” said Heather Kaufman, director of arts and public events, speaking about the alleged Denver Airport swastika. “Some things are worth debunking. Others aren’t.”

The Freemason-centric time capsule, however, is perhaps more baffling.

Set to be opened in 2094, the time capsule is covered by a dedication marker and capstone that contains Freemason symbols and mentions the “New World Airport Commission.” It allegedly holds a credit card, Colorado flag, DEN opening day newspapers, and more artifacts from 1994. 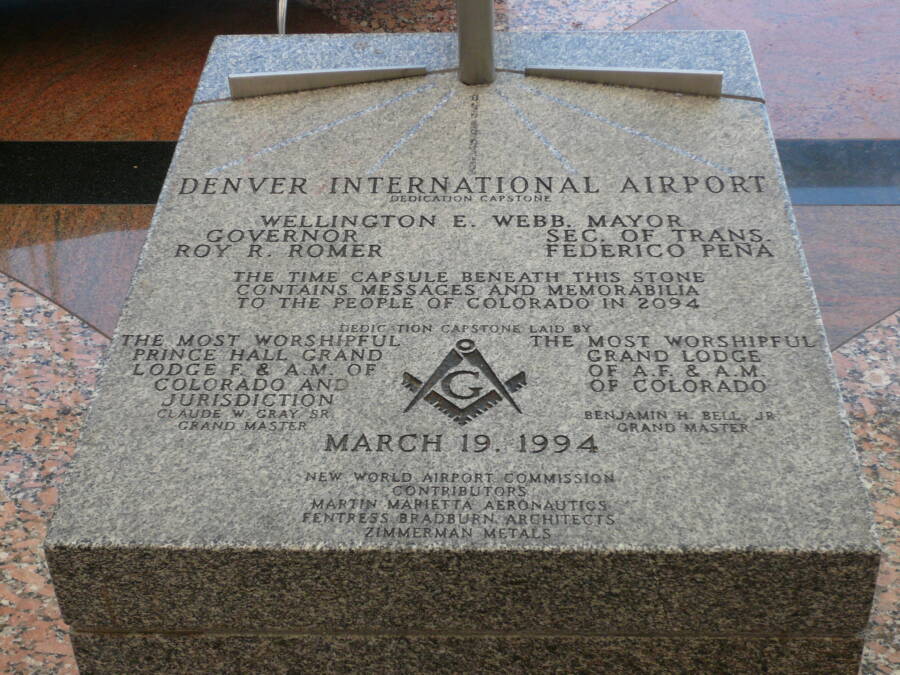 The strange truth of the matter is that the New World Airport Commission group does not exist — and the name bears a titular resemblance to the New World Order so feared by paranoid onlookers. However, the name, inspired by Antonín Dvořák’s New World Symphony, was chosen by art advocate Charles Ansbacher to commemorate the airport’s opening.

A plethora of contract disputes purportedly led to several disparate factions of workers, under different contractors, finalizing DEN. This separation would have allowed those in charge to keep the true scope of this project a secret from all involved.

While it remains to be proven that DEN connects to the Cheyenne Mountain Complex or NORAD itself, one thing is absolutely certain — there are at least six underground levels below DEN. Many believe these serve as an Area 51, of sorts, complete with experimentation on aliens and retro-engineering UFOs.

Yet again lacking sufficient proof, the theory appears to have originated from contractors who worked at the site in the 1990s and saw mysterious tunnels and entrances. Officially, these tunnels were merely part of DEN’s failed underground baggage-transport system.

Today, around 1,000 people work in the various underground levels on a daily basis, ferrying luggage from ticket counters and planes to baggage claim areas. 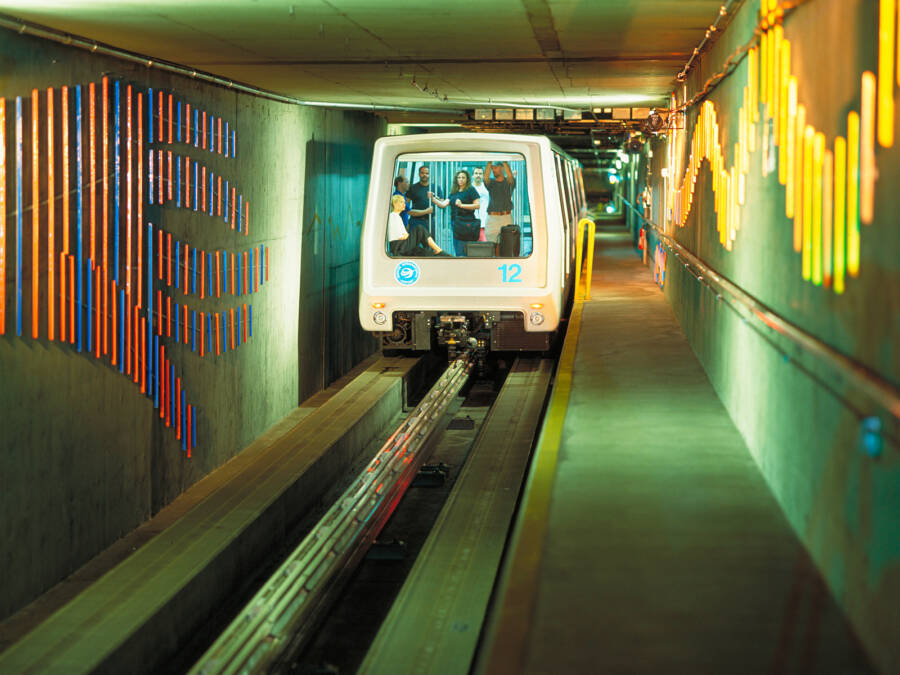 While alien imagery drawn by employees on the underground walls have spooked onlookers, Montgomery says there’s nothing to worry about. These were yet again merely jokes by DEN workers killing time in the 470,000-square-foot underground space — jokes that got out of hand.

“Over the years, little personal touches have been made,” he said. “There’s a certain mystique to anything you can’t see. The fact of the matter is, it would take me three days to show you everything down here.”