"Beer and baseball go together, they have for years. But I think those kids were doing things other than beer."

The dog days of summer, 1979. Baseball, beer, teenagers, and rock and roll. Disco Demolition Night may have made headlines the following the day for the destruction it caused, but considering the circumstances, it couldn’t have been that big of a shock.

By 1979, the backlash to disco music’s popularity from rock and roll fans had reached a boiling point. And the Chicago White Sox – who weren’t having a great season and who were known for promotional stunts – saw it as an opportunity. Recruiting shock-jock, anti-disco radio host Steve Dahl, the Sox’ marketing director devised a stunt to draw a bigger crowd: for 98 cents and a disco record, people could come to Comiskey Park and watch a ton of disco records get blown up.

How The Hatred Of Disco Gave Rise To A Promotional Idea 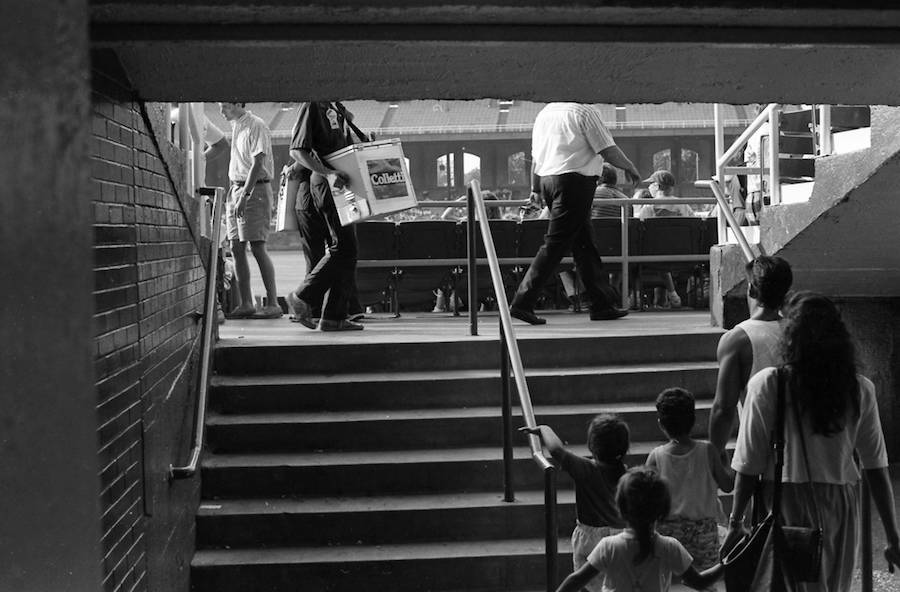 Disco music rose in the 1970s, hitting mainstream popularity by the middle of the decade. It was up-tempo and glitzy; it spawned choreographed dance routines and clubs where sparkly mirror balls hung from the ceilings. By the time movies like 1977’s Saturday Night Fever and its Bee Gees-filled soundtrack premiered, the craze was sweeping the nation. 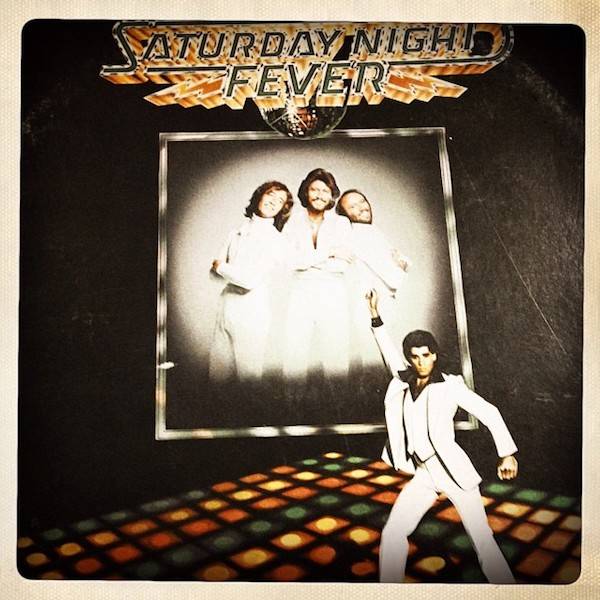 One group that didn’t catch disco fever was the rock and roll die-hards. They didn’t care for the sound or the style. After disco albums began dominating the charts, rock fans feared their music was on the decline. Some even speculated that white fans of rock music didn’t like the gay, black, and Latin communities with which disco was popular.

On the evening of July 12, 1979, a double-header was planned between the White Sox and the Detroit Tigers. Mike Veeck was the Sox’ marketing director and also the son of team owner Bill Veeck, who as former owner of the St. Louis Browns, signed 3’7″ Eddie Gaedel to a contract in 1951. (Gaedel had one Major League at bat and unsurprisingly walked on four pitches because his strike zone was so small.)

Leveraging hatred of disco, Mike Veeck collaborated with 97.9 WLUP’s anti-disco DJ, the 24-year-old Steve Dahl. Dahl had spent the weeks leading up to the game inviting listeners to show up with 98 cents and a disco record. The records would be collected at the gates and then, in between the two games, Dahl would blow them all to smithereens.

A Riot In The Making

The White Sox hoped that the promotional event would attract 20,000 fans to the park instead of the usual 15,000. Instead, around 50,000 people showed up. Most of them weren’t there for the game. Carrying profanity-laced signs and wearing clothing that bashed disco, they were there to see the music they hated burn.

The huge, unexpected crowd was too much for the security to manage. People who couldn’t get into the park climbed fences. Not all of the records were collected and rowdy patrons tossed them through the air like frisbees. The ruckus of Disco Demolition Night was already underway before the game even started.

“I remember from the get-go, it wasn’t a normal crowd,” said Alan Trammell, the Tigers’ shortstop and now Hall of Famer.

The first game started at 6 p.m. and ended a little after 8 p.m., with the Tigers winning. Afterward, Dahl made his way to the field wearing camouflage gear and a soldier’s helmet.

“This is now officially the world’s largest anti-disco rally!” he shouted to the energized crowd. They began chanting in unison, “Disco Sucks! Disco Sucks!” 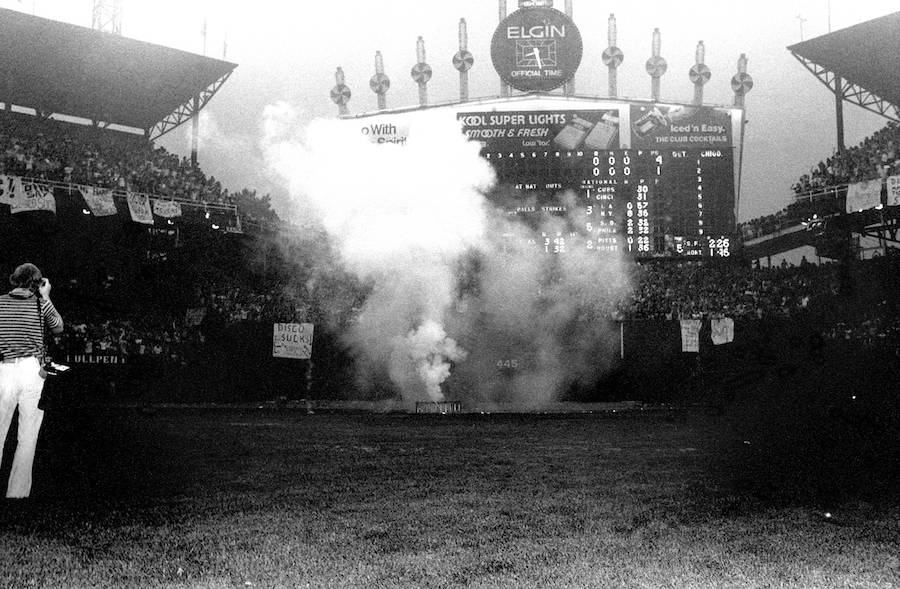 Getty ImagesSmoke from a huge crate of disco records.

With all the collected records in a giant box, Dahl made good on his word, blowing up them in a blast that shot them high into the air; shards of vinyl littered the field.

After that, it was anything goes. 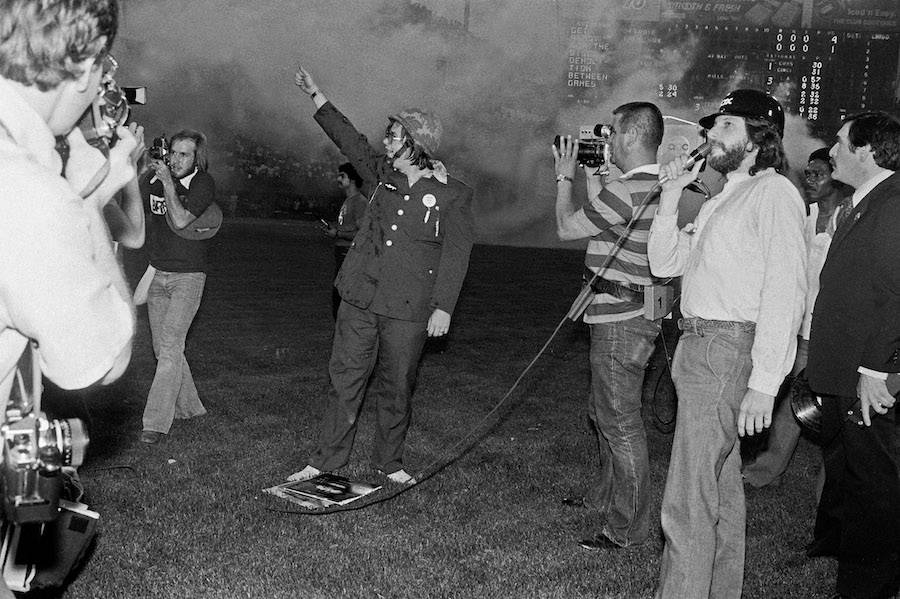 The crowd charged onto the field and started trashing it, pulling up the bases and dragging the batting cage out. They climbed poles and burned banners. The pandemonium continued even as the second game was meant to start. The crowd ignored announcements for people to return to their seats. It was only when the Chicago Police showed up in full riot gear that they fled the field. The actual baseball fans who remained in their seats applauded the police’s arrival.

But even with the field cleared, it was still a mess. After an hour of cleanup by the grounds crew, it was still deemed unplayable. The game was initially postponed but ultimately resulted in a forfeit by the White Sox.

In the aftermath, 39 people were arrested for disorderly conduct. On Dahl’s show the next day he made light of the event, reading headlines from the local papers about how disastrous it was and mocking them over it. The Fort Scott Tribune summarized Disco Demolition Night by saying that “a gimmick dreamed up by the White Sox promotional department and a local disc jockey, Steve Dhal, who promised to blow up the records between games, backfired.”

“Beer and baseball go together, they have for years. But I think those kids were doing things other than beer,” said Sparky Anderson, the manager of the Tigers, to the Union Tribune.

Disco Demolition Night is considered one of the biggest promotional events ever to go awry. On the other hand, the evening could be viewed as the night that disco died. The genre experienced a heavy drop in popularity over the next year and by the 1980s the refrain “disco sucks” became more popular than the music itself.

Next read about the rock and roll groupies who changed music history. Then check out these 5 bizarre events that triggered massive riots.