Paleontologists In China Just Identified A Short-Necked, Head-Butting Ancestor Of The Giraffe

The discovery of Discokeryx xiezhi, a distant relative of modern-day giraffes with a shorter neck and hard skull, suggests that sexual competition — not food — drove giraffe evolution. 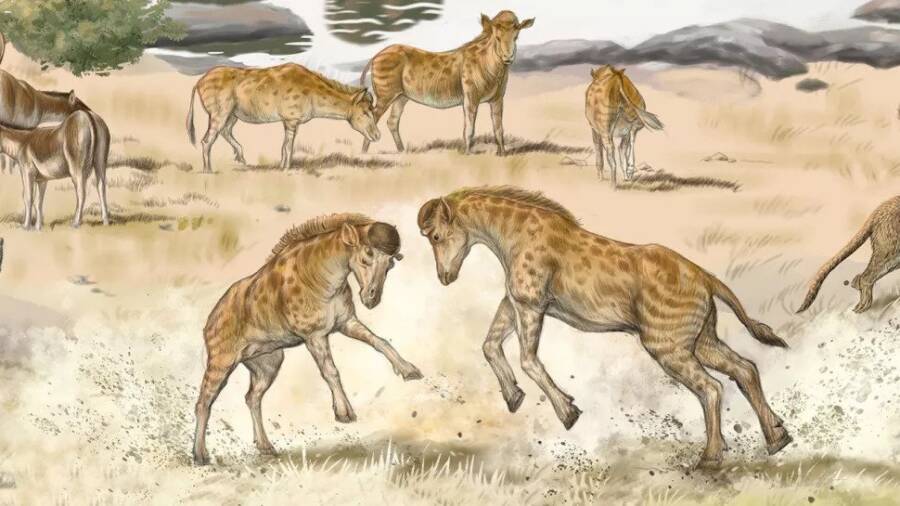 Why do giraffes have long necks? The easy explanation, according to Charles Darwin’s theory of evolution, is that the animals grew long necks to reach food. But the discovery of an ancient giraffe relative called Discokeryx xiezhi supports the “necks-for-sex” hypothesis, which suggests that giraffes developed long necks in order to effectively compete for mates.

In a study published in Science, paleontologists described how they discovered part of a D. xiezhi skull in China’s Junggar Basin in 1996. According to The New York Times, they referred to it as the “strange beast” for years because they weren’t quite sure what it was.

But as they discovered additional fossils in recent years, the paleontologists were able to determine the “strange beast” was actually a distant relative of the giraffe. D. xiezhi didn’t look like modern-day giraffes, though. It had a much shorter neck, with a thick keratin layer on its skull akin to a shield or helmet.

“This animal is an extreme example of using head-butting as a fighting tool,” Jin Meng, a paleontologist at the American Museum of Natural History and a co-author of the new study, explained to The New York Times.

Indeed, Meng and other researchers conclude that D. xiezhi males fought each other by bashing their heads. But D. xiezhi fought so fiercely that they would have died without their thick heads and strong necks. According to CNN, these ancient giraffe relatives seemed better equipped for head-butting than any modern animals.

So, what does that have to do with today’s giraffes and their long necks?

Though giraffes are perhaps best known for nibbling peacefully at tall trees, they’re fierce fighters, too. Male giraffes engage in combat called “necking” in order to win female mates. When they fight, the giraffes knock their skulls against their competitors’ necks, and having a long neck is an advantage. 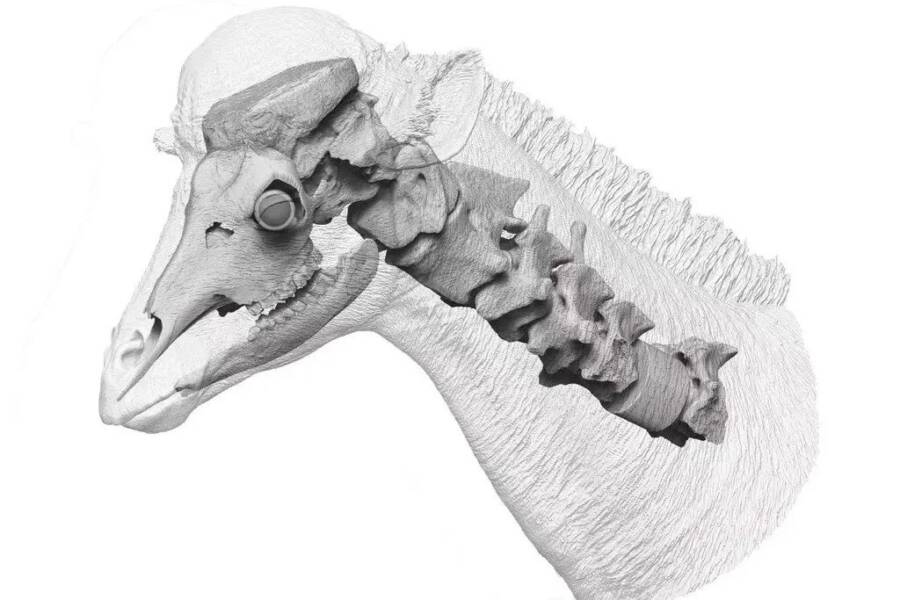 Wang et al., ScienceDiscokeryx xiezhi developed a thick layer of keratin atop its skull, which made it uniquely suited to engage in fierce head-butting battles.

“Both living giraffes and Discokeryx xiezhi belong to the Giraffoidea, a superfamily,” Shi-Qi Wang, an associate professor at the Chinese Academy of Sciences’ Institute of Vertebrate Paleontology and Paleoanthropology and one of the study’s authors, explained to CNN.

“Although their skull and neck morphologies differ greatly, both are associated with male courtship struggles and both have evolved in an extreme direction.”

This seems to support the “necks-for-sex” theory, which suggests that giraffes evolved to have long necks because it was sexually advantageous.

Live Science reports that this theory was first developed in 1996 and ran contrary to the accepted belief that giraffes had evolved long necks merely to forage for food.

But the two theories may not be mutually exclusive. Giraffes with long necks may have won more battles and more mates — and then also found that their elongated necks allowed them to reach higher leaves.

“As the males used their necks for fiercer and fiercer fights and their necks became longer and longer, they finally could reach the tallest leaves,” Wang told The New York Times.

And Robert Simmons, an honorary research associate at the University of Cape Town’s FitzPatrick Institute of African Ornithology, who first proposed the “necks-for-sex” theory alongside Lue Scheepers, a zoologist at the Etosha Ecological Institute in Namibia, agrees.

“At present, it is not easy to distinguish the ‘feeding competition’ hypothesis from the ‘necks for sex’ idea,” he explained to Live Science. “It is very likely that both have played a role in the evolution of the magnificent animals we see today.”

So, why do giraffes have such long necks? The jury is out, and it may take finding more remains of ancient giraffe relatives like D. xiezhi to know for sure. But it seems likely that sexual competition played an important role in the evolutionary development of these curious animals.

After reading about the discovery of Discokeryx xiezhi, see how poachers slaughtered two of the last white giraffes left in the world. Or, delve into the study that suggests that giraffes’ height might attract lightning strikes.