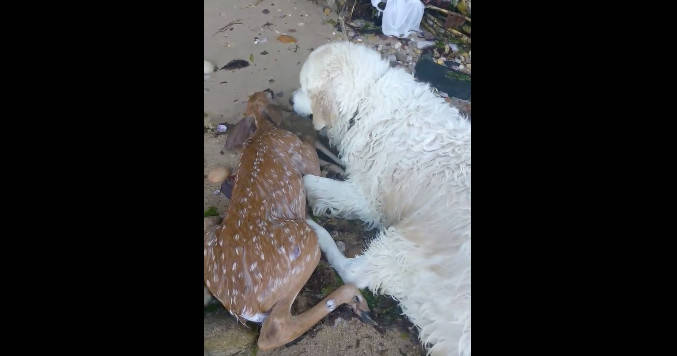 This week, a video emerged of a dog saving a baby deer from drowning in the waters of the Long Island Sound:

In the video, the golden retriever jumps into the water, grabs the deer by the scruff of its neck and drags the baby animal back to shore. Mark Freeley, an attorney for Last Chance Animal Rescue in Southhampton, New York, shot the video.

Freeley was taking his two dogs on a walk when one of them, Storm, suddenly jumped into the waters of the sound. When Freely saw that she was bringing something back to shore in her jaws, he began filming, and soon realized it was a fawn.

“Good boy, Storm. Bring him in,” Freeley says in the video.

Once on shore, the dog licked and pawed at the young animal to make sure it was alive. Freeley then called Strong Island Animal Rescue League, which arrived moments later to take care of the three-month-old animal. Upon examination, the rescue team found the deer covered in ticks, as well as cuts and bruises on its head.

Just days later, however, the deer appears to be doing just fine, and rescue team representatives plan to release the deer into the wild in three months.

Next, for more daring animal rescues, watch this video showing an elephant being rescued at sea in Sri Lanka. Then, for more cute animal content, watch this young hippo bother a crocodile.