Ever since the 1950s, Dolores Huerta has fought tirelessly to improve the lives of immigrants, women, and the working poor — despite nearly being killed in the process. 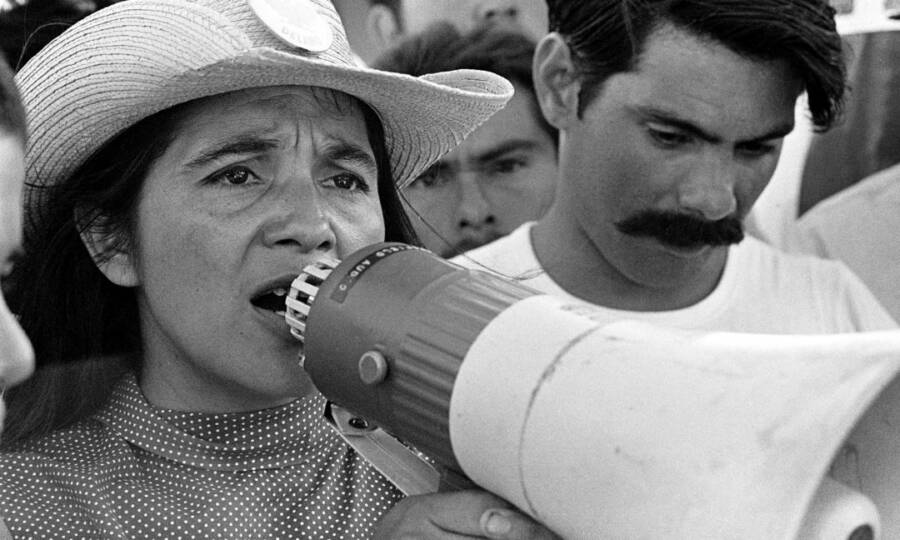 Faced with laws that made words like “strike” and “boycott” illegal, many Latinos in Arizona hesitated to support the growing labor rights movement in the 1970s. But Dolores Huerta urged them on with a simple message — “Sí, se puede!” which translates to “Yes, we can!”

As a young civil rights activist, Huerta faced an uphill battle to improve the lives of Latino Americans. Still, she notched victories like the passage of laws that required driver’s licenses and ballots to be offered in Spanish.

But by the 1960s, Huerta eyed a much larger mission — improving the economic conditions of farmworkers, many of whom were Latino and Filipino migrants. Eager to help them, Huerta co-founded what would become the United Farm Workers union with fellow activist César Chávez. Together, they marched, organized strikes, and demanded better laws.

How Dolores Huerta Became An Activist

But the desire to help others ran in her family. Huerta’s father, Juan, who started out as a farmworker and a coal miner, went on to become a union activist and even won a seat in the New Mexico state legislature. Though Huerta’s parents divorced early on, she kept in touch with her father and was impressed by how he used his position to help people in need.

Meanwhile, her mother, Alicia, operated a hotel that largely served farmworkers in Stockton, California. There, Dolores Huerta watched as her mother took care of her farmworker clients. When they couldn’t pay, Alicia either didn’t charge them rent or she let them pay with fruits and vegetables.

“My mother always said that you had to help people that were in need,” Huerta said. “That you should not wait for anyone to ask you to help them.”

Early on, Huerta also experienced discrimination firsthand. In school, a teacher once accused her of cheating on her papers because they were “too well-written.” And Huerta was horrified when white men beat up her brother for wearing a Zoot-Suit, a fashion favored by Latino men at the time. 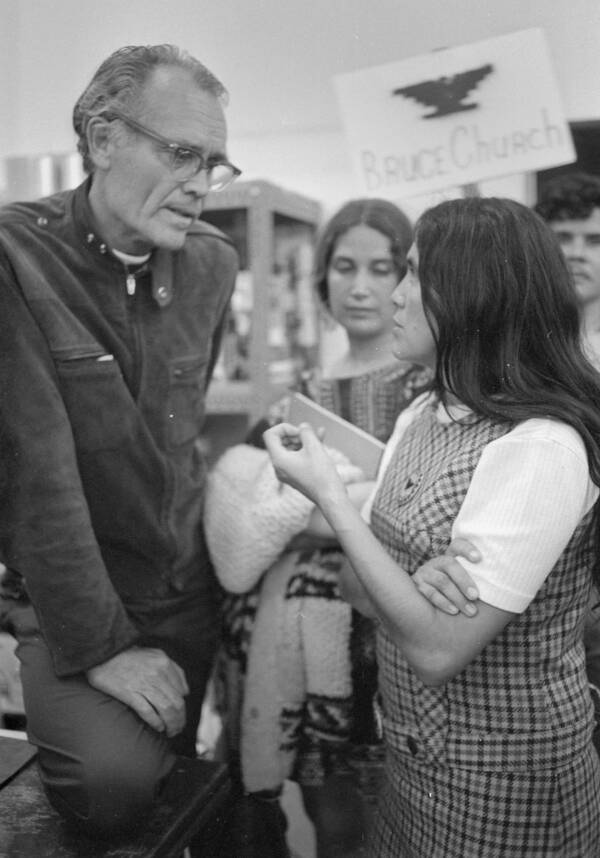 But until the 1950s, Huerta lived a rather ordinary life. She got married, had children, got divorced, and pursued a career as an educator. But then, she began teaching the children of farmworkers: “I couldn’t tolerate seeing kids come to class hungry and needing shoes. I thought I could do more by organizing farmworkers than by trying to teach their hungry children.”

Everything changed in 1955 when she met activist Fred Ross. Years earlier, Ross had helped co-found the Community Service Organization (CSO), which focused on fighting for Mexican American rights.

Entranced, Huerta listened as Ross described how the CSO had organized activists, helped register voters ahead of elections, and pushed for consequences for police brutality. “That meeting changed my entire life,” Huerta recalled. “I just felt like I had found a pot of gold!”

With Ross’s encouragement, Dolores Huerta helped found the Stockton chapter of CSO. Tough, tireless, and persuasive, she succeeded in passing 15 bills aimed at improving the lives of Latinos in California.

“We were able to get driver’s licenses and ballots in Spanish,” Huerta remembered. “We were able to pass a law that if you were a legal resident with a green card, you qualified for public assistance. [And] we passed [a] voting law that is still in effect today.”

But Huerta wanted to do more. She next turned her formidable gaze to the downtrodden farmworkers of California.

Inside The 1965 Delano Grape Strike 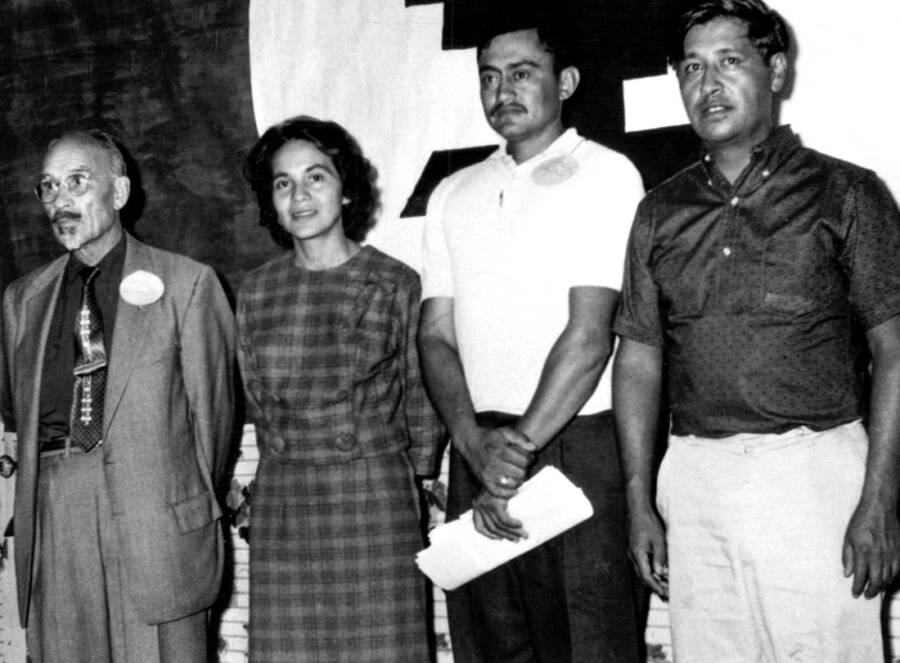 In 1958, Dolores Huerta and the CSO started working with farmworkers, many of whom were poor. “Their furniture was orange crates and apple boxes,” Huerta recalled. “And you know that these people were working very, very hard but they were earning such a little bit amount of money.”

Huerta’s work brought her into contact with a young activist named César Chávez. Like Huerta, Chávez wanted to do more to help the farmworkers. “We have to start the union,” Chávez told Huerta in the early 1960s. “Farmworkers will never have a union unless you and I do it.”

So Dolores Huerta and César Chávez created the National Farm Workers Association, which later became the United Farm Workers union. Setting their sights on improving the lives of farmworkers in California, they moved near the Delano grape farms and began organizing workers there.

They weren’t quite prepared to launch a strike. But when Filipino American grape workers in Delano started their own in 1965, Huerta and Chávez decided to help. The strike was unlike anything they had done before.

She and Chávez helped lead the push to improve conditions for the grape workers. They formed picket lines, organized boycotts, and rallied the strikers. It was dangerous work. Furious growers threatened the strikers with rifles, tried to run them down with cars, and even sprayed them with sulfur. 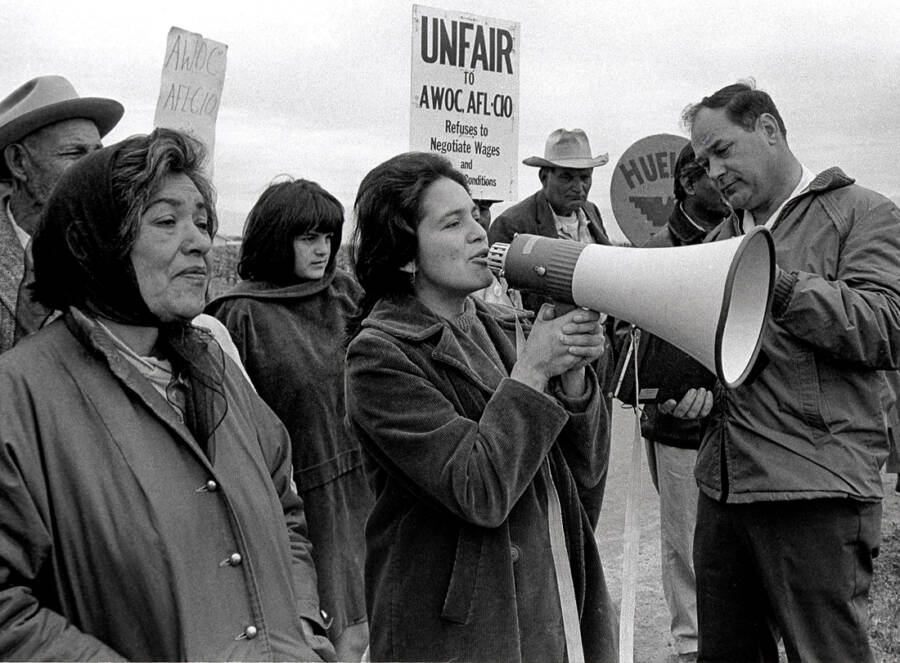 Huerta also faced sexist vitriol from both her adversaries and her allies. Growers called her the “dragon lady.” The press often dismissed her as Chávez’s “secretary” or even his “girlfriend.” And men within the movement made so many sexist comments that Huerta started keeping a record.

“At the end of the meeting, I’d say, ‘During the course of this meeting you men have made 50 sexist remarks,'” she recalled in the book Dolores Huerta Stands Strong: The Woman who Demanded Justice. “Pretty soon I got them down to 25, then 10, and then five.”

And slowly, the Delano Grape Strike began to gain steam. Members of the International Longshoremen’s and Warehousemen’s Union refused to help transport boycotted grapes. And the United Auto Workers started donating thousands of dollars per month to support the strikers and their cause. At the height of the strike, 17 million people stopped buying grapes.

Huerta and Chávez’s work also drew the praise of Martin Luther King Jr. and Robert F. Kennedy. And since Kennedy supported the strikers, they supported his 1968 presidential bid. In fact, Huerta was by his side as he celebrated his California primary win — mere moments before he was assassinated on June 5, 1968. She later mourned his death as the “death of our future.”

After five grueling years, Huerta, Chávez, and the strikers finally broke through in 1970. The Delano growers agreed to raise wages to $1.80 an hour (and 20 cents for each box picked). They also agreed to contribute to the union health plan, and protect workers against pesticides in the fields.

Dolores Huerta took the victory. But her battles were far from over.

The Enduring Legacy Of Dolores Huerta

Dolores Huerta didn’t rest on her laurels following the success of the Delano Grape Strike. For the next five decades, she kept up the fight for civil rights in America — even if it meant risking her life in the process.

Huerta was arrested more than 20 times for her role as an activist. And at one point in 1988, she was beaten so brutally by a baton-wielding police officer that her spleen was damaged beyond repair.

She recalled, “I was beaten… almost to the point of death. They fractured four ribs and I had my spleen — well, they never found it. The guy hit me so hard it just burst.” But despite terrifying incidents like these, Huerta remained committed to non-violence — in the spirit of Martin Luther King Jr. — and to fighting for the causes closest to her heart.

As the vice president of the United Farm Workers — a position she held until 1999 — Huerta continued to support farmworkers. She pushed for amnesty for Mexican laborers, launched new boycotts, and helped improve Latino representation in politics. Her efforts led to the California Agricultural Labor Relations Act of 1975 and the Immigration Reform and Control Act of 1986.

Huerta also turned her attention toward women’s rights. In the 1990s and 2000s, she pushed to elect more women to higher political office throughout America. She said, “We need a feminist to be at the table when decisions are being made so that the right decisions will be made.”

Today, in her 90s, Huerta hasn’t slowed down. “My personal energy just comes from the work that we have to do,” she said. “There’s so much work out there.” Her foundation, the Dolores Huerta Foundation, supports communities in their fight for social justice and civil rights. 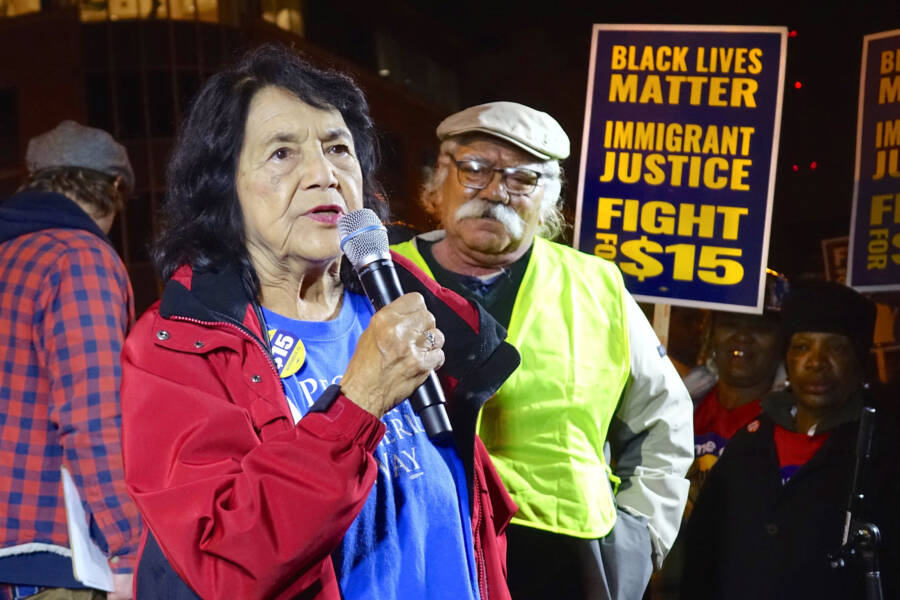 Wikimedia CommonsDolores Huerta, pictured at a protest in 2015.

But despite her impressive career as an activist, Dolores Huerta rarely appears in history books — sometimes on purpose. In 2010, the Texas State Board of Education voted to remove her from third-grade standards because of her affiliation with the Democratic Socialists of America.

Meanwhile, some other organizations have been hesitant to embrace her due to her “unconventional” background as a twice-divorced single mother of 11 children. But as time has gone on, she’s been honored and recognized more and more often for the work that she’s done.

In 1993, Huerta became the first Latina woman to be inducted into the Women’s Hall of Fame. And in 1998, she received the Eleanor Roosevelt Human Rights Award. Perhaps most notably, she was awarded the Presidential Medal of Freedom in 2012 by former President Obama.

It was then when Obama acknowledged that Huerta was the inspiration behind his own famous slogan that he used during his 2008 presidential campaign. As Huerta recalled, “When I met President Obama, the first thing he said was, ‘I stole your slogan.’ And I said to him, ‘Yes, you did.'”

Huerta has expressed gratitude for accolades and honors as they come. But of everything in her long career as an activist and organizer, Dolores Huerta is most proud of how she improved the lives of farmworkers.

“They always come up to me and say, ‘Thank you, thank you,'” Huerta said. “So I think when I look back, I think that’s one of the important things: bringing humanity to people. When you know that people are really benefiting from the work that you do, it’s very important.”

After reading about the inspiring life of Dolores Huerta, discover the story of civil rights activist and congressman John Lewis. Then, learn about Emily Davidson, the women’s rights leader who was run over by a horse.