By some accounts, the self-proclaimed "Angel of Death" killed upwards of 70 people in and out of hospitals across Kentucky and Ohio. 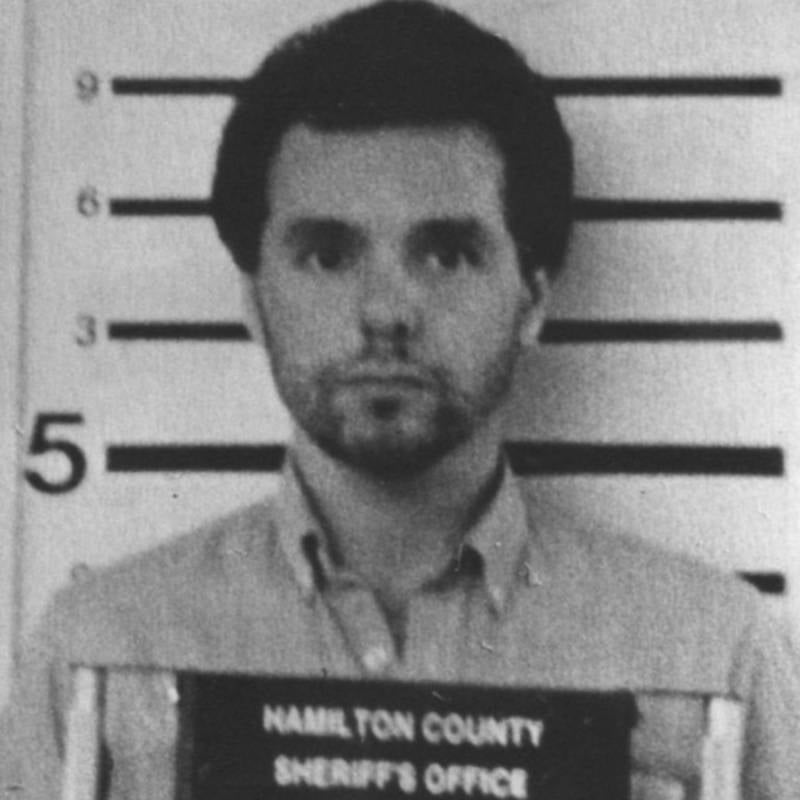 Public Domain Donald Harvey’s mugshot from his arrest in 1987.

Donald Harvey was an unassuming nurse’s aid in 1987 when he pleaded guilty to killing 37 people. The soft-looking man had been on a decades-long rampage of poisoning hospital patients driven by some God complex. He saw himself as an “Angel of Death” who meted out mercy killings to the terminally ill.

In reality, he was an undiscerning killer who used a lethal cocktail of arsenic and cyanide on the helpless.

Donald Harvey was born near Cincinnati, Ohio, on April 15, 1952. Shortly afterward, the family moved to Booneville, Ky., a tiny town in Appalachia.

His family was poor and lived in the mountains of eastern Kentucky where Harvey was allegedly abused by an uncle and a neighbor as young as the age of four. Instead of wanting to play on the playground in school, the smart youngster preferred to spend time with adults. He was remembered as well-liked by teachers but isolated by students.

Harvey dropped out of school after ninth grade but earned his GED through correspondence school. Unemployed, a young Harvey went to see after a grandfather dying in a hospital in Kentucky. It was here his fascination with death began.

After becoming a regular visitor to the hospital, he was asked to become an orderly, which he did. He gave patients medications and saw to both their medical and personal needs. He became obsessed with this feeling of power over the helpless as he controlled all the routines that would keep them alive.

“Well,” he told an interviewer in 2003, “control and power’s about the same thing, isn’t it? The way I look at it, you controllin’ something, you got the power to do it.”

Harvey killed for the first time on May 30, 1970, two weeks into his employment. He smothered a stroke victim with a pillow. He went on to smother, hook up empty oxygen tanks, and impale a patient with a wire hanger in place of a catheter, some 13 more patients.

But because most of Harvey’s victims were old or in such poor health, no one suspected him. Besides, Harvey added in the same interview, the doctors were too busy and overworked to notice.

How forensic pathologists in the late ’80s determined Donald Harvey to be a killer.

“Most of the doctors would be so overworked, so busy, that a patient could die and the family doctor would not come in and pronounce the person dead. They’d have a resident do that. They just pronounce him dead and send him straight to his funeral home.”

This standard procedure left hundreds of patients in the hands of a deranged killer who used whatever methods he had at his disposal to murder his victims.

Cyanide, arsenic, rat poison and petroleum distillates were among Harvey’s favorite methods of murder. He put these chemicals into foods, fruit juices and pies. He would also suffocate his victims, either with pillows or by letting their oxygen tanks run out of air.

Meanwhile, Harvey struggled with depression and thoughts of suicide. He met an undertaker named Vernon Midden who introduced him to the occult and also how the human body operates in detail. When their relationship went south, he imagined embalming the undertaker alive.

He continued to kill the elderly and infirm with new knowledge of the body. Some he would describe as “mercy” killings as the victims were unwell. Then, Harvey tried to kill himself.

In 1971, he set the bathroom of an empty apartment in his building on fire in an unsuccessful suicide attempt. He was subsequently arrested and paid a $50 fine. He would try to kill himself later that year with NyQuil and would again be arrested on suspicion of burglary in his own apartment building. He was drunk when apprehended and he bragged to the police about killing 15 people at Marymount Hospital, but no one believed him.

He enlisted in the Air Force but was promptly asked to leave and consequently tried to kill himself a third time. Throughout this, Harvey became ever more entangled in the Occult and joined a local group. He engaged in several relationships with men, and when he felt one of his partners may leave him, he poisoned his friend, his neighbor, and his father to death. He even poisoned his partner so that he was too sick to leave their apartment.

Harvey went so far as to kill one of his own ex-boyfriends, all the while continuing to poison, smother, and maim his patients at various hospitals across Kentucky and Ohio. 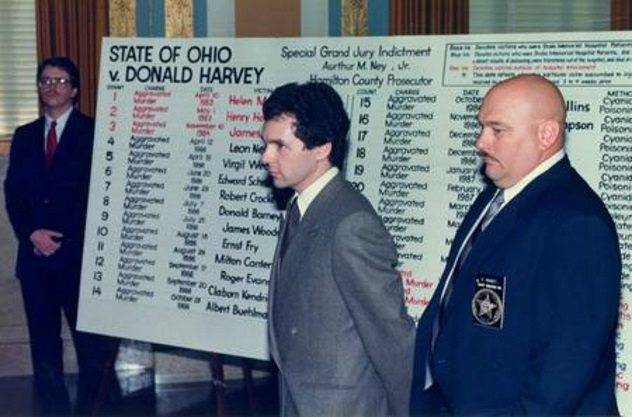 YouTubeHarvey stands before a board listing his victims. He allegedly laughed when it was presented.

This went on for nearly decades until a fortuitous autopsy finally brought the Angel of Death to justice.

Angel Of Death Brought To Earth

Mr. John Powell was hospitalized from a motorcycle accident in early March of 1987. He later died in his hospital bed. When a doctor performed a routine autopsy on Powell’s stomach, he caught a whiff of something strange: Cyanide.

It became clear that Powell didn’t die from his motorcycle accident but from poisoning.

Harvey was an attending nurse and the investigation was quickly onto him. Harvey refused a lie detector and was consequently brought in for questioning where he confessed to killing Powell. He said he did so because he felt sorry for Powell and his family. He did not include the other murders he had committed, but evidence mounted that Harvey was the nurse on duty for dozens of other deaths in two different hospitals, one in Kentucky and one in Ohio.

Authorities had enough evidence to convict Harvey for killing 37 people. Over a four-year span, he terminated the lives of 21 patients at the Drake Hospital in Cincinnati. Between 1970 and 1971, Harvey killed 13 patients at Marymount Hospital in London, Kentucky.

Angel of Death killed in prison.

Harvey said that for the most part, his killings were out of mercy.

“I felt what I was doing was right. I was putting people out of their misery. I hope if I’m ever sick and full of tubes or on a respirator, someone will come and end it,” he once reported.

Harvey said the killings gave him a sense of satisfaction and almost happiness. The murders gave Harvey some sense of power and control in a life that he had much difficulty navigating.

In court, Harvey laughed when prosecutors showed the names of his victims on a board for the jury.

Three of those murders accounted for the deaths of acquaintances outside the hospital. The media dubbed Donald Harvey the Angel of Death, and rightfully so. Harvey himself estimated in an interview that he actually killed as many as 70 people.

On Sept. 7, 1987, in Kentucky, Harvey confessed to committing 12 additional murders while employed at Marymount Hospital. In November, he pleaded guilty and was sentenced to eight life terms plus 20 years. He pled guilty a few months later for the three other deaths outside of the hospital from which he received three life sentences plus three terms of seven to 25 years.

In total, Harvey was convicted of 37 murders but some estimates place him at closer to 87.

On March 30 2017, Harvey died at age 64 in prison. Like his victims, he didn’t die of natural causes. Prisoners beat the serial killer to death in his cell.

After this look at the demonic Donald Harvey, read about more evil doctors and nurses who killed their patients. Then, check out Christopher Duntsch, known as Dr. Death, who killed several patients as he operated on them.