Why Congress Can, But Won’t, Force Trump To Release His Tax Returns

Although three congressional committees can make Donald Trump release his tax returns, they won’t. Here's why. 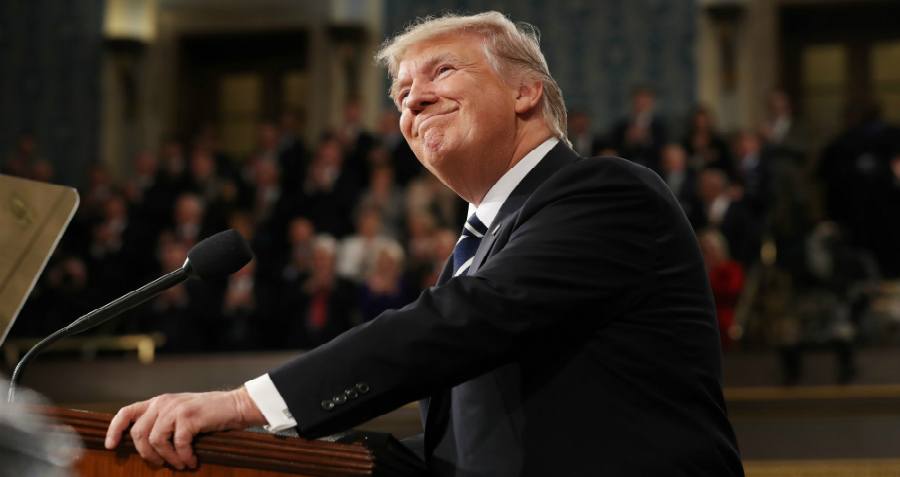 Pool/Getty ImagesDonald Trump delivers an address to a joint session of the U.S. Congress on February 28, 2017.

Donald Trump is the first president in decades who has declined to publicly release his tax returns. This break from tradition has caused many to wonder what exactly he may have hiding in them — especially since allegations of corruption have already come to define the Trump presidency.

Three committees in Congress can make President Donald Trump release his tax returns — but don’t expect them to exercise that ability anytime soon.

Thanks to an obscure 1924 law, the House Committee on Ways and Means, the Senate Committee on Finance, and the Joint Committee on Taxation (which is made up of members from the two prior committees) can request Trump’s tax returns from the federal government. The committees can then vote to make the returns public should they feel the need.

However, a Republican majority controls all three entities, and thus far they have decided against applying the 1924 law despite its precedent and recent usage in 2014. This fact has frustrated Democratic committee members such as Rep. Bill Pascrell Jr., a member of the Ways and Means committee, who has urged Republican leaders to think twice.

“We do not want our president, regardless of his party affiliation… to deal with foreign nations returning back and forth with gifts when this could have an effect on decisions down the road,” Pascrell told The Washington Post.

On February 1, 2017, Pascrell sent a letter to the Ways and Means Chairman Kevin Brady, a Republican representative from Texas, asking Brady to request Trump’s tax returns on behalf of the committee.

In the letter, Pascrell laid out the logic behind wanting to examine Trump’s finances:

“President Trump has chosen to keep an ownership stake in his businesses, the scope of which we have no knowledge of as he has refused to disclose his tax returns. We believe that it is imperative for the public to know and understand his 564 financial positions in domestic and foreign companies, and his self-reported net worth of more than $10 billion. We know that state-owned enterprises in China and the United Arab Emirates are involved in his businesses, and that his business ties stretch to India, Turkey, the Philippines, and beyond. Russia, Saudi Arabia, and Taiwan may also have ties to his businesses. These foreign entities are paying rents, licensing agreement payments, and issuing permits for developments — effectively giving them a tool to influence our new President.”

Brady, however was not receptive to Pascrell’s argument. Shortly after receiving the letter, Reuters reported that Brady told reporters: “If Congress begins to use its powers to rummage around in the tax returns of the president, what prevents Congress from doing the same to average Americans?”

“Privacy and civil liberties are still important rights in this country,” Brady added, “and [the] Ways and Means Committee is not going to start to weaken them.”

“Rummaging around? Is that what this is? What was it in 2014, if you want to talk about rummaging,” Pascrell said. “I’m telling you whose account I want. I’m telling you the individual. His name is Donald Trump. He’s a citizen of this country. I’m not asking for his birth certificate. Oh wait that’s another story, I forgot.”

According to Reuters, Sen. Orrin Hatch, a Republican from Utah and the chair of the two other committees with the power to apply the 1924 law, has decided against requesting Trump’s return as well.

None of this is good news for the nearly three in five Americans who believe that Trump has a responsibility to release his tax returns.

Caring or not, the fact of the matter is that Trump is under no obligation to release his tax returns. That tradition began in 1952 with Adlai Stevenson and only picked up steam in 1973 after Richard Nixon was forced to release his returns following yet another scandal.

“Presidents are, for tax-paying purposes, private citizens. Just like every other taxpayer in the country, their tax returns are private,” Joseph Thorndike, a historian with the Tax History Project, told The Washington Post. “There is no special law applied to presidents. They are just citizens. That’s the way we should think of them when it comes to taxes and their tax returns.”

Thorndike added that even if he did release his returns — or any return — by his own accord, the public wouldn’t find many (if any) bombshells. Nominees only release what is politically advantageous for them, Thorndike said, which perhaps explains why candidates such as Marco Rubio, Ted Cruz, and Bernie Sanders only released their 1040 forms — which are not full returns — this past election cycle.

Leaked or not, Trump’s two partial tax returns that have recently leaked to the public — one from 2005 and one from 1995 — lack any information that could help investigators or the American public learn if the U.S. president is enriching himself through foreign and domestic policy decisions.

Or, as Pascrell said: “[Personal disclosure forms are] one thing. Tax returns will tell you where your money is and how much is invested, and that is really interesting and fascinating.”

Next, check out how Trump learned to talk to Americans in the WWE, before finding out why even George W. Bush has rebuked Trump’s travel ban, his Russian connections, and his attacks on the free press.