The Drownings At Nantes: How One Man Orchestrated The Execution Of Over 4,000 Men, Women, And Children

Jean-Baptiste Carrier, appointed by his government during the French Revolution, personally oversaw the execution of 13,000 counterrevolutionaries. 4,000 of which were sent to slow, watery deaths. 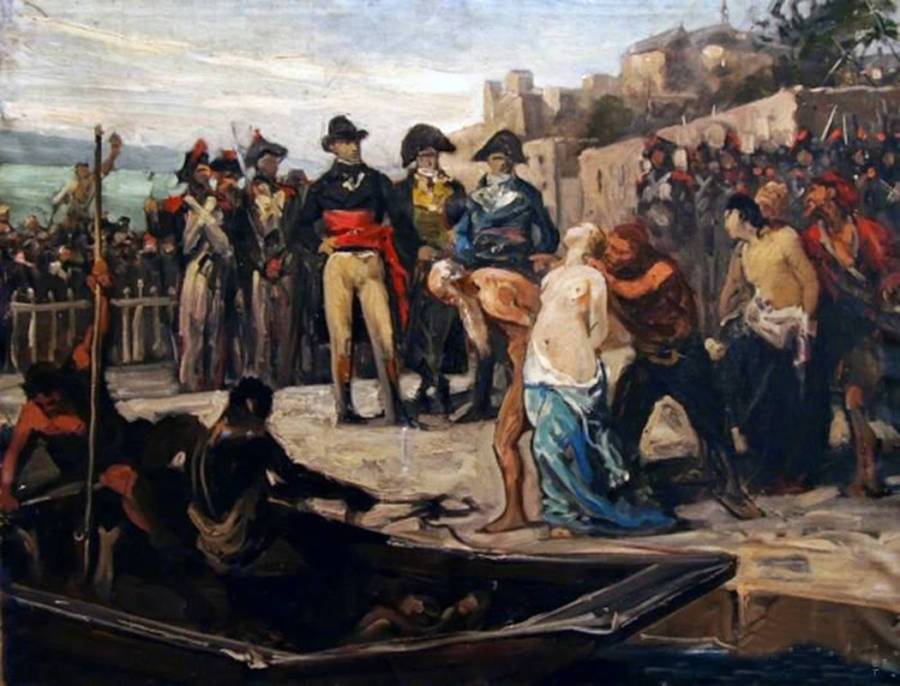 Wikimedia Commons The Drownings at Nantes in 1793, painted in 1882 by Joseph Aubert.

The bloody French Revolution saw the end of the monarchy and the emergence of peasants, military men and landowners as authorities over a bankrupt government. The harrowing revolt lasted for years, and it saw its share of horrible crimes against humanity.

These crimes peaked in the yearlong period of unprecedented violence known as the Reign of Terror. But few atrocities leveled those displayed at the Drownings at Nantes.

French revolutionary, Jean-Baptiste Carrier, was sent by the new French government to Nantes to crush any counter-rebellions made by anyone in opposition to the Revolution, whether they be an aristocrat or royal-sympathizer. He was also expected to ensure that the new government of the people was accepted by the region.

In order to do this, anyone suspected to be a counterrevolutionary was to be tried and if necessary, executed. Carrier favored the execution route and oversaw the deaths of 13,000 to 15,000 people. Many of them were innocents, as Carrier was suspicious of many of the people in Nantes, including women and children, 4,000 of whom were inhumanely drowned.

Carrier’s part in the Reign of Terror began in March of 1793. He helped to create the Revolutionary Tribunal, a judicial body that tried counterrevolutionary insurgents in court. The tribunal dealt with this opposition swiftly and usually concluded their trials through shooting or guillotining those suspected of undermining the revolution.

After the success of the Revolutionary Tribunal in Paris, the government dispatched Carrier to Brittany to forge an alliance with the peasantry there. Two months later, in October of 1793, he was ordered to Nantes to quell the counterrevolution there. Carrier did more than quash the counterrevolution. He instituted a mass execution.

He rounded up rebels– both suspected and proven– in Nantes and threw them in jail. When food began to run out in the prisons, he had the prisoners shot or guillotined. But Carrier’s methods of execution grew more sinister. 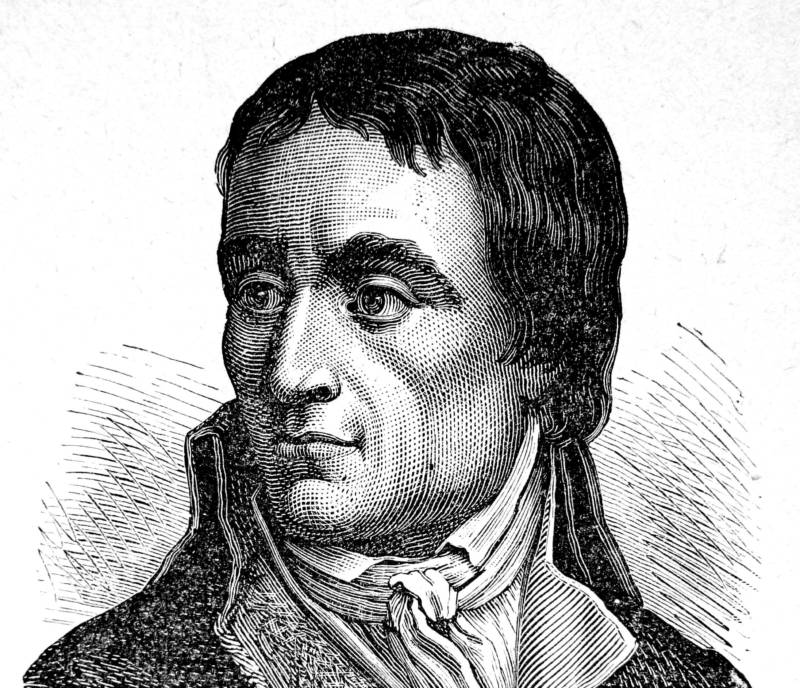 One account of Carrier’s systematic killings described the drownings as follows:

“Old men, pregnant women, and children were drowned with no sort of distinction. They were put on board lighters which were railed round to keep the prisoners from jumping overboard if they should happen to disengage themselves. There were plugs made in the bottom or sides and, being pulled out, the lighter sank and all in it were drowned.”

‘Lighters’ were specially made boats for the purpose of drowning these insurgents. Often the insurgents were stripped naked, tied face to face, and mercilessly bound to the boats which Carrier’s most trusted men steered into the Loire River. Sometimes, Carrier’s men left these naked people bound together for over an hour before knocking them unconscious with the butt-end of a musket.

The doomed counterrevolutionaries then sank slowly to their deaths.

The Horrific Justice Of Carrier

Carrier’s brand of justice was cruel, swift and horrifying. Accounts vary, but estimates range from 13,000 to 15,000 people died because of Carrier’s orders. Of those, 4,000 were drowned in the Loire River.

Legend has it that one incident saw Carrier himself assist in the execution of four children. When his chief executioner died in horror after killing the children, Carrier replaced him on the spot. 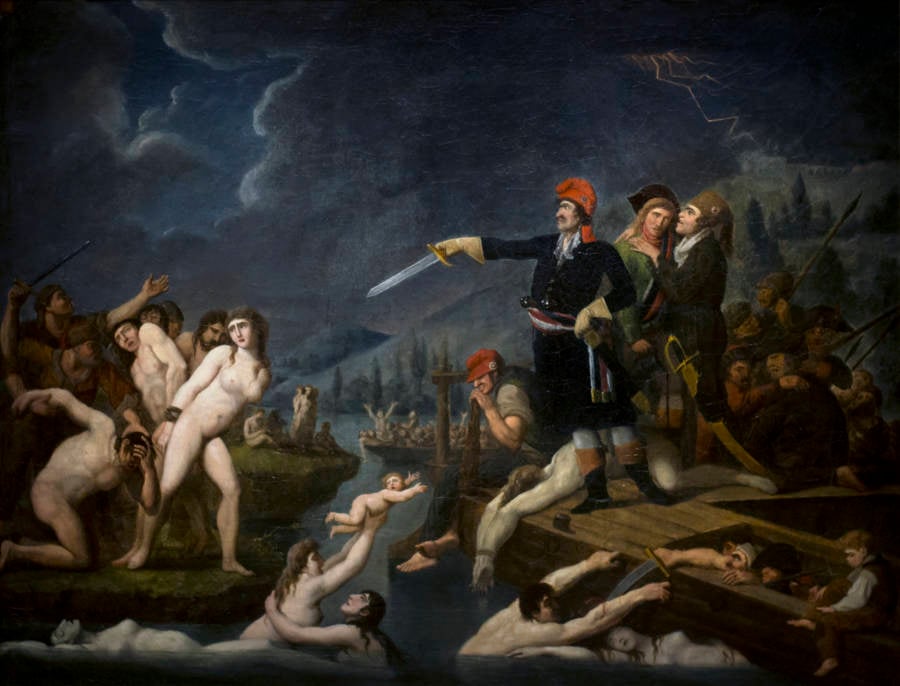 Wikimedia Commons The Drownings at Nantes, an anonymous period painting.

Carrier and his men referred to the drownings as “national baptisms” or “immersions.” Prisoners in jail were called “birds in a cage.” Soldiers and executioners alike would have fancy meals in the jail, in front of hundreds of prisoners, and then after dinner, they would round up their prisoners and drown them in lighters.

Carrier Gets The Guillotine

Drownings first happened a night, but then Carrier ordered them to occur during the day. Perhaps he saw the drownings as a possible deterrent.

Daylight drownings were horrible for young women. Men watching from shore would pick some out and rape them before killing them. Carrier himself was said to partake in this. Witnesses said that drowning became the more merciful death.

One lighter saw 60 prisoners held on the boat for 48 hours. When the plugs opened and the Loire’s waters suffocated them, other prisoners on the ledges were forced to remove the dead bodies at swordpoint.

Carrier’s depravity finally ended in February of 1794. The mass murderer was recalled to Paris by the Committee of Public Safety after hearing of the horrors in Nantes.

Despite trying to assuage the committee, Carrier was arrested in September of 1794. He himself was guillotined on Dec. 16, 1794.

Some may say the guillotine was too swift compared to execution by drowning. Too bad the punishment didn’t do the crime poetic justice for the man who butchered as many as 4,000 people in the chilly waters of the Loire River.

Next up in infamous French men, seven Napoleon Bonaparte facts that will surprise you. Then, read about the real-life Hunger Games instated by Stalin, on Cannibal Island.