Simultaneously described as having a sweet aroma and smelling like raw sewage, durian is one of the world's most divisive foods and has been nicknamed the "king of fruits."

Bored of the average banana or run-of-the-mill mango? There’s always the durian fruit – though be warned, the smell and taste of a durian have been known to divide people.

Likened to the stench of onions, rotting meat, raw sewage, turpentine, and even dirty gym socks, the stench of durian is so potent that it’s been banned on Singapore’s mass transit system. 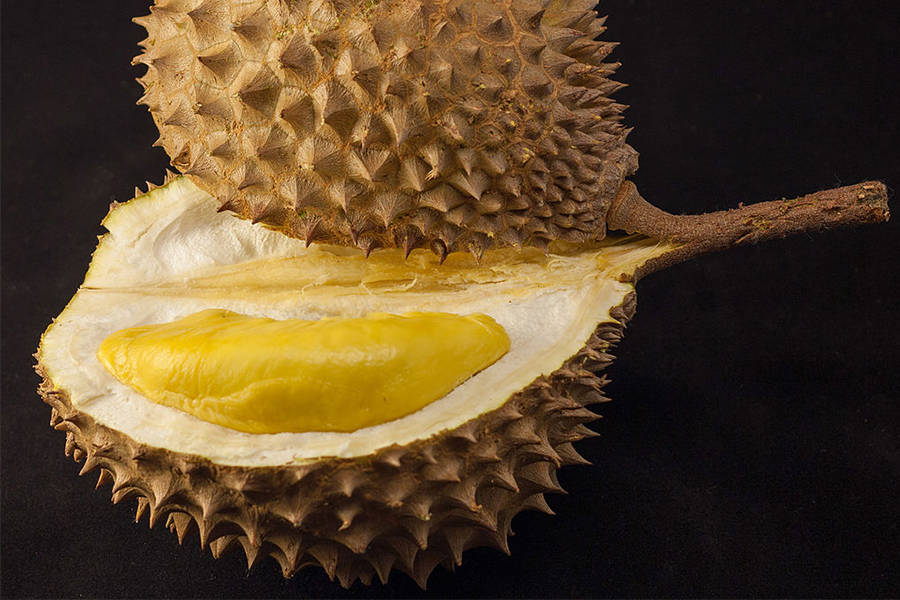 Wikimedia CommonsA durian fruit still in its husk. The smell and taste of durian vary from person to person, with some claiming its stench makes it inedible.

Though it’s been hailed as the “king of fruits” for its armored rind, its reputation has been made by its unusual smell. It’s possible, however, that many are unaware of this strange fruit which is popular across Southeast Asia. So, here’s everything to know about this bizarre food.

Wikimedia CommonsThe fruit of a species of tree known as Durio, durians are an armored fruit that’s been likened to banana — and hot garbage.

Indigenous to Borneo and Sumatra, durian also grows in Malaysia and Thailand, where over 300 different species of the fruit have been identified and only about nine of them are edible — though according to some, the stench renders even those nine not worth the taste.

A durian is unlikely to go unnoticed in the farmers market. Even without its distinct aroma, the fruit is a sight to behold. Measuring between 10 and 12 inches long and six inches wide on average, it is covered in a thick, thorny green husk. 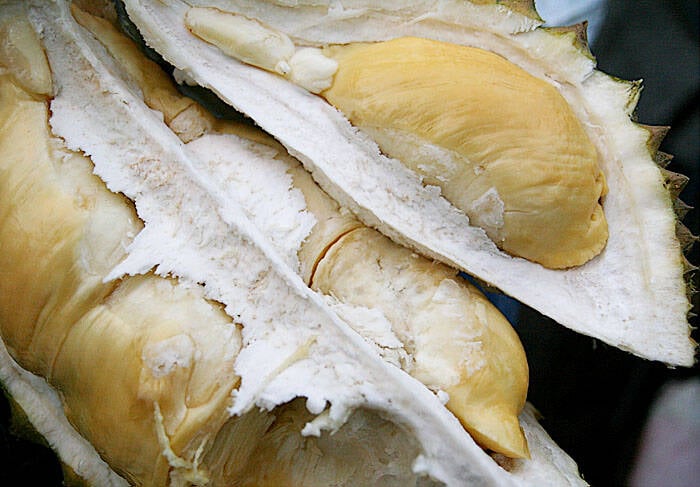 FlickrThe flesh of a durian fruit comes in a variety of colors, from yellow to white.

The flesh, which has been compared to a banana or pineapple in texture and taste, is usually yellow or white in color. As with many other tree fruits, the durian is typically ready to eat once it has ripened to the point that it falls off the tree itself.

And for those who enjoy the fruit, they usually wait until it has over-ripened and is at its sweetest, at which point the texture of the flesh is more like sour cream. 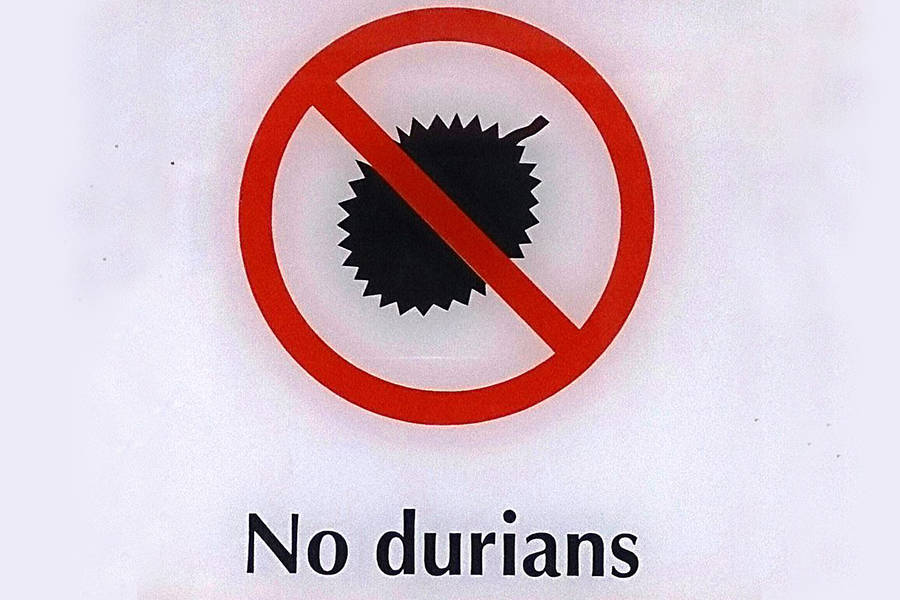 Wikimedia CommonsA “no durian” sign, as seen on public transportation. The smell of durian is known to cause panic.

Of course, there are many who are unable to get past the scent of a durian fruit even at its sweetest point.

When it was first described to the western world in an 1856 letter by a travel writer, the fruit was likened to “a rich custard highly flavored with almonds… but there are occasional wafts of flavor that call to mind cream-cheese, onion-sauce, sherry-wine, and other incongruous dishes.”

The fruit is so offensive to some, in fact, that it has been banned from mass transit in several countries, including Thailand, Japan, and Hong Kong. 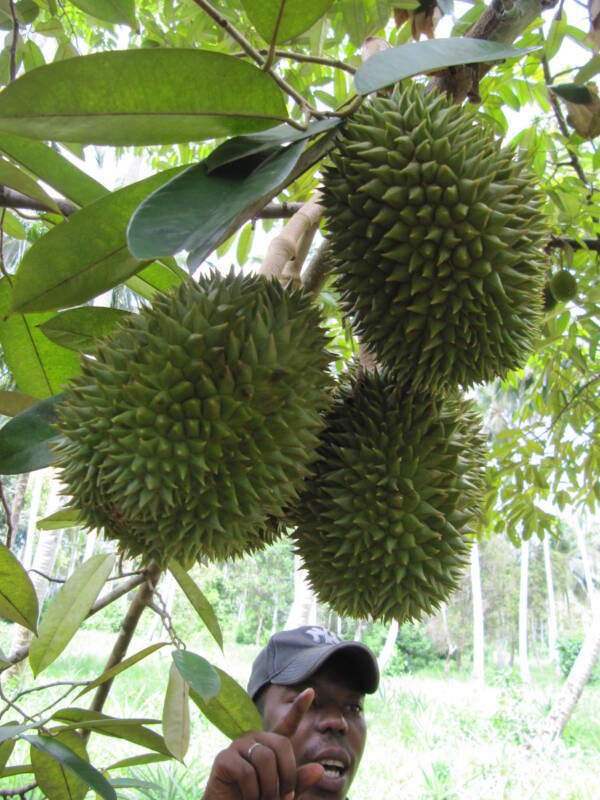 Wikimedia CommonsDurians growing on a tree in Zanzibar.

The smell itself might be bad enough, but what’s worse is that it lingers, sometimes for hours, even after the fruit is gone. On public transit, “no durian” signs are just as prevalent as “no smoking” ones. The stench has been compared to paint remover and trash with hints of fruity sweetness.

Cooking durian does quell the smell some, but according to Anthony Bourdain, “Your breath will smell as if you’d been French-kissing your dead grandmother” after consuming it.

The stench has been such a point of contention that, in 2012, a group of scientists from Singapore decided to explore what was behind it. They discovered that about 50 different chemical compounds, including four previously unknown to science, combine within the fruit to create its skunk-like odor.

Scientists also proffer that the fruit’s stench is a survival tact. Curious animals will break into it or devour it, scattering the fruit’s seeds on the ground or in the animal’s scat. 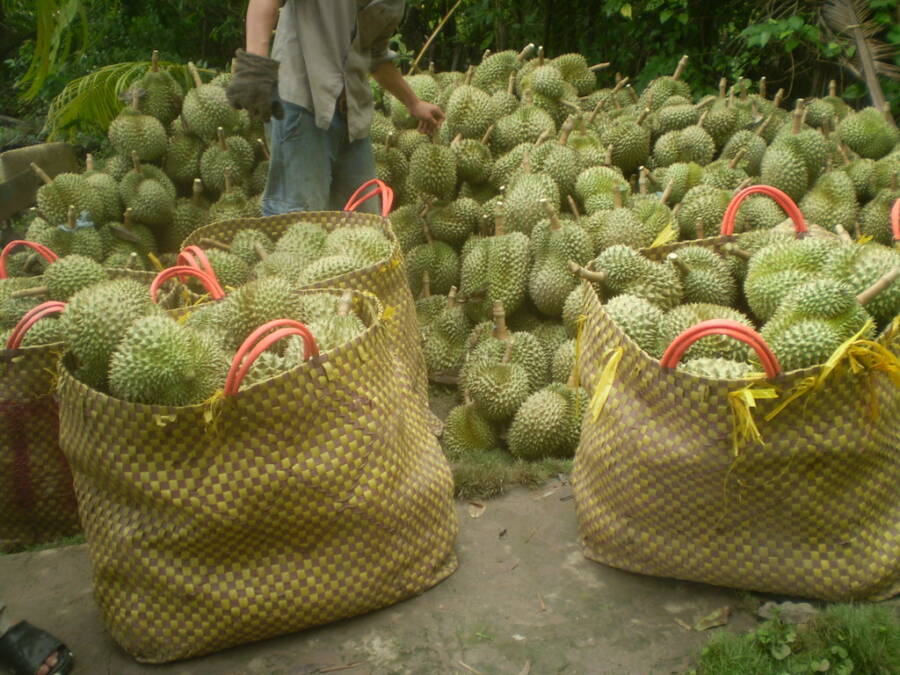 FlickrDurians are a billion-dollar industry in Thailand.

For those willing to get past the durian’s smell, it is actually an extremely versatile food. It can be eaten raw and has even been used to make wine.

More commonly, it is cooked and used as a flavoring additive in many dishes. Possibly the most shocking, however, is its most common use – which is in candies and baking.

Indeed, some have likened the taste of durian to crème brûlée-like. The texture is oftentimes custardy, further emphasizing its dessert qualities. The most traditional way of eating durian fruit is to mix it with sugar and wrap it in a pancake. One New York City ice cream parlor mixes it with banana and turns it into a surprisingly popular ice cream.

Of course, those delectable treats can only be enjoyed by those willing to get past the fruit’s pungent odor.

Divisive though the fruit may be, it is a lucrative global market. Though its size easily makes it one of the most expensive fruits to ship, its market is valued at over $17 billion annually — and is expected to hit $25 billion by 2025.

Perhaps durian’s divisive smell and taste has worked in its favor — and it pays to be a controversial fruit.

After this look at the divisive taste and smell of durian, check out more weird and surprising foods, like the fertilized chicken egg of Filipino cuisine known as the balut egg or hakarl, the fermented Icelandic shark.