For centuries, the process of making hakarl has been the same, allowing for the preparation of the dish to become as much a part of history as the dish itself.

The national dish of Iceland, Kæster Hákarl or hakarl for short, is one that is not for the faint of heart. Anthony Bourdain once described it as “the single worst, most disgusting and terrible tasting thing” that he had ever eaten, and Gordon Ramsay couldn’t even swallow it:

Those who have slightly more experience with hakarl describe the experience as an unpleasant one at best, as the smell is something similar to ammonia, and the flavor is not much better.

But, after all, what does one expect when consuming rotting, dried, fermented shark flesh?

Though it is a dish not many could bring themselves to sample, hakarl is a meal rooted in history and tradition.

When the earliest Icelandic residents settled on the island centuries ago, their food options were limited. There was fish, surely, but the frigid temperatures required the people to find something larger and more sustainable. Alas, they found the Greenland shark. Abundant in freezing waters, and measuring an average length of 24 feet and a weight of 1700 pounds, the shark was the perfect source of food.

The only problem? Greenland shark meat is toxic to humans. The shark’s flesh contains high levels of uric acid and trimethylamine oxide, a mixture which acts as a natural anti-freeze to protect the shark from the frigid arctic waters. The chemicals are so concentrated that a few bites of uncured meat are enough to kill a human.

However, the early Icelandic people were unbothered by that.

Rather than look for an alternative food source, they found a way to make the meat edible, by using a rather unusual method of purification and preservation. This preservation method has been used since the Viking times and actually hasn’t changed at all since. Why fix what isn’t broken, right? 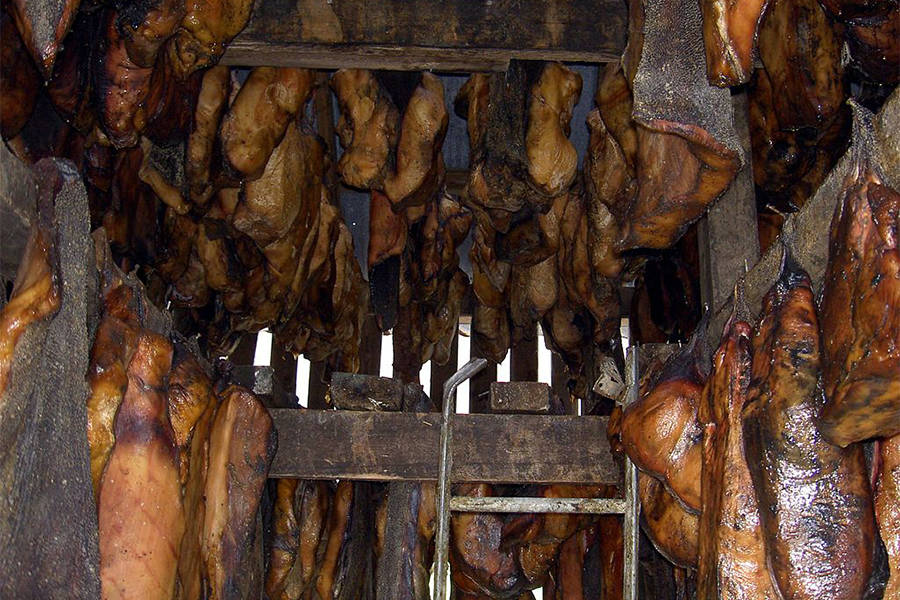 Wikimedia CommonsHakarl hanging during the drying part of the preservation process.

First, the dead shark is beheaded, as the head is useless for food. Then, the headless body is dropped into a shallow hole dug in the sand. Stones, sand, and gravel are also added to the hole, on top of the carcass, the weight of which presses the liquids out of the body.

For six to twelve weeks, the carcass remains in its shallow, sandy grave, fermenting in its own bodily fluids, the ammonia and uric acid that make it so toxic. Ammonia and uric acid are also found in cleaning supplies, and of course, human waste. In short, the meat ferments in what is essentially bleach-y urine.

After the fermenting process is complete, the shark is exhumed, cut into strips, and placed in a special shack meant for drying hakarl meat. For several months, the strips hang and dry. Hakarl makers know that the meat is ready by the smell, similar to rancid cheese.

“The nose tells you when it is ready,” said one traditional Icelandic chef. “It’s like wine making.”

Another sign that the hakarl is ready? The appearance of the jerky-like meat. Perfect hakarl will have developed a crusty brown outer layer. Yum.

Once the crust is removed, the hakarl is finally ready. There are two varieties of hakarl that are produced from the process; glerhakarl, reddish and chewy meat from the belly, and skyrhakarl the lighter, softer meat from the body. The meat is sold in most Icelandic grocery stores and is traditionally eaten at porrablot, a celebration that takes place in midwinter.

After learning about Kæster Hákarl, the national dish of Iceland, read more about the greenland shark, one of the longest living animals on earth. Then, check out more crazy foods, like the balut egg.