Meet The Dybbuk, The Malevolent Spirit Of Jewish Folklore

Originating in 17th-century Europe, the legend of the dybbuk warns of a "soul-cleaving" spirit with the power to possess vulnerable people. 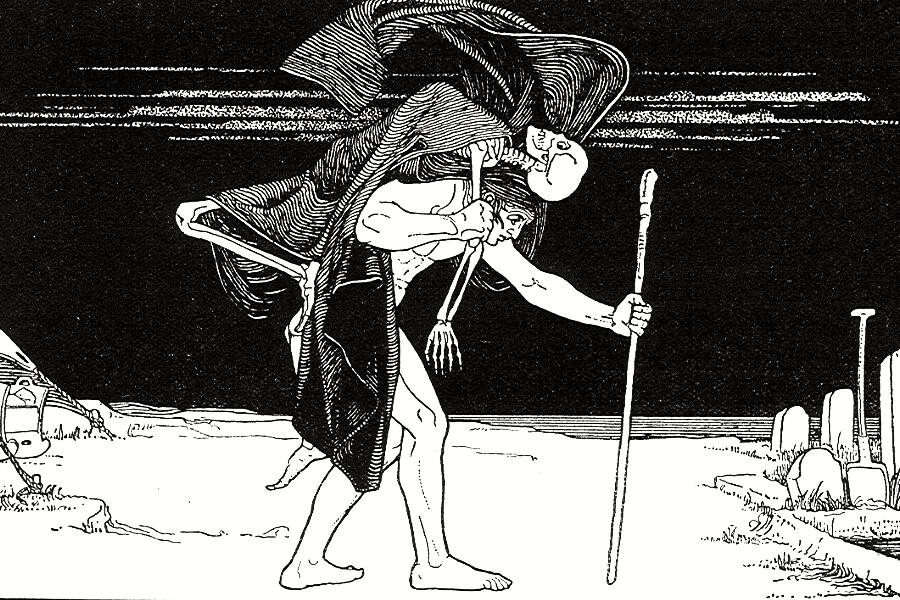 Public DomainThe legend of the dybbuk might have originated as a way to explain cases of severe mental illness.

In European Jewish folklore, there is an evil parasitic spirit known as the dybbuk, a once-human entity that restlessly wanders the Earth, hunting for a living host upon which it can prey.

The dybbuk was said to enter a person’s body, cleave their soul in half, and control them by speaking through their mouth. Some historians posit that this legend was born in 16th and 17th-century Europe as a way to explain cases of severe mental illness — and the only cure was to be exorcised by a local rabbi.

The History Of The Dybbuk In Jewish Folklore

The term “dybbuk” is actually a far more recent creation than the stories about the spirit itself.

According to the Jewish Virtual Library, the word “dybbuk” doesn’t appear in either the Kabbalah nor in talmudic literature, two important texts in Jewish history. Instead, the paranormal phenomenon was simply called an “evil spirit,” or sometimes “ru’ah tezazit” in talmudic literature, and an “unclean spirit” in the New Testament. 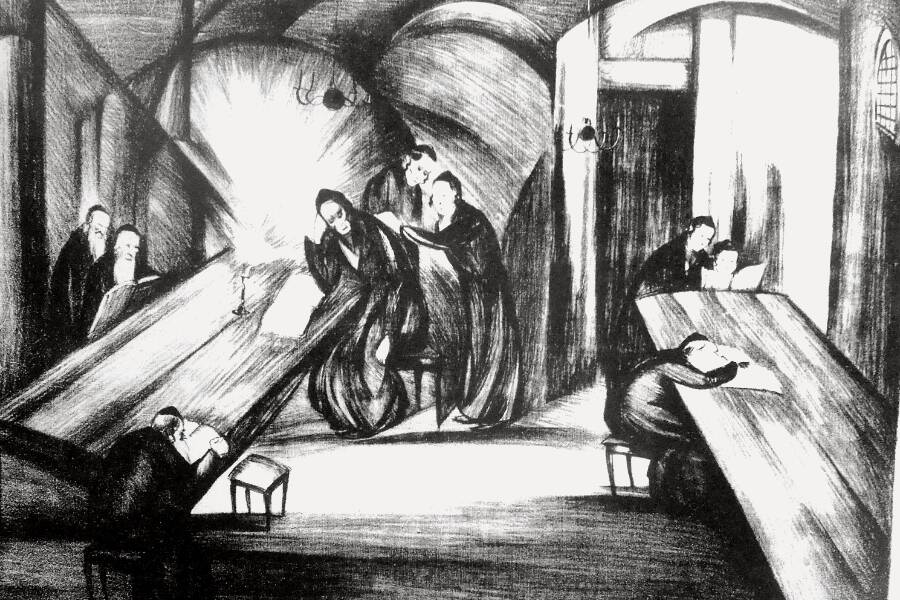 The word dybbuk was first introduced in the 17th century in the spoken language of Jews from Germany and Poland as an abbreviation of “dybbuk min ha-hizonim me-ru’ah ra’ah,” or “a cleavage of an evil spirit.”

Originally, the dybbuk appeared in Gospels and stories in the time of the Second Temple as chaotic figures that entered the bodies of sick people. The narrative later shifted to insinuate that dybbukim were the spirits of the dead who had not been properly laid to rest.

As time went on, however, the reasons for a dybbuk’s appearance continued to evolve and came to incorporate the doctrine of gilgul, or “transmigration of the soul.” This idea asserts that souls exist in cycles and are attached to different human bodies, similar to reincarnation.

The idea of gilgul was pursued heavily by the 16th-century mystic Isaac Luria, who pushed the idea of the dybbuk as part of his theory that souls sought self-perfection (hence the need for transmigration, as one lifetime was not long enough for a soul to become perfect).

As this belief became popular among the 16th-century Jewish population, dybbukim were generally understood to be the souls of of those whose crimes ran so deep that they could no longer transmigrate, leading them to become “denuded spirits” who sought to latch themselves onto the souls of the living.

And of course, the only way to free a person from the dybbuk’s possession was through exorcism.

It was largely women who were accused of being dybbukim, particularly ones with mental illness.

That isn’t to say, of course, that men did not also face such accusations, but a limited understanding of mental illness and the old notion of “hysterical” women saw dybbuk accusations more frequently directed towards the female population.

Fear of dybbukim also reached its peak during the same period in which over 300,000 men and women were condemned for witchcraft in Europe. Fortunately, those accused of being possessed by a dybbuk were not, unlike their Christian counterparts, burned at the stake, drowned with cement blocks, or subjected to other various “witch trials.” 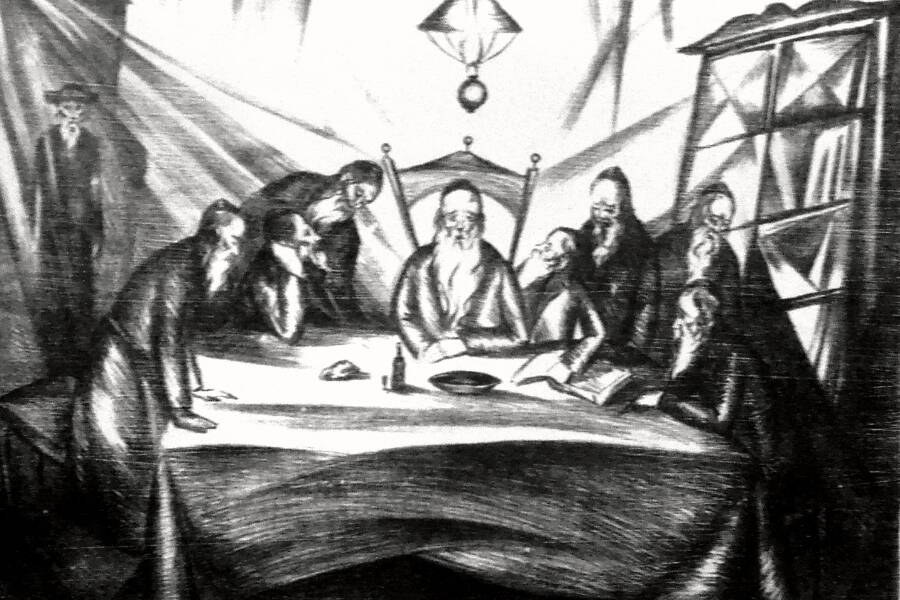 Instead, they were subjected to a ritual exorcism that took place in the synagogue and was carried out by ten “purified” men who had fasted and performed the Mikveh, a Jewish ritual bath.

These ten men would stand around the possessed person, wearing white burial shrouds, adorned in prayer shawls, with their heads and arms bound by daily prayer parchments.

The exorcising rabbi would then cajole and threaten the dybbuk by listing its wrongdoings and demanding that it leave the body in which it had taken residence.

Once the verbal portion of the exorcism had concluded, the rabbi would remove seven scrolls of the Torah from the synagogue’s ark, blow on seven rams’ horns, light seven black candles, and recite a 42-word prayer for protection known as Ana Bekoach.

The exorcist, careful not to show any signs of fear, would then command the dybbuk to leave the possessed’s body with explicit instructions only to do so between the person’s big toe and its nail to avoid damaging them — and a second command telling the spirit that it was not to enter the body of another living person.

A Cursed Box Purchased On eBay

But the legend of the dybbuk did not die with antiquity.

In 2004, a man named Jason Haxton claimed to have come across one himself. He said that he bid on an item on eBay, a small mahogany wine box that he intended to gift to a friend for their magic act. It was in fairly good shape and only cost him $280.

“The day it arrived, I put my hands on it, and it almost feels like the thing collapses into a liquid state,” Haxton told My San Antonio nearly a decade after the purchase. “I feel like a knife is coming into my gut. I’m paralyzed in pain. When I go to bed, I have terrible dreams of a hag that seems to come with the box.”

Haxton, at the time the director of a Kirksville, Missouri medical school’s museum, first heard about the box from one of the museum workers, who told Haxton that his roommate owned a haunted Jewish wine cabinet and planned to sell it on eBay.

Supposedly, the box had made its way to this roommate through the owner of a furniture refining business who had purchased the wine cabinet at a Holocaust survivor’s estate sale. Inside were old coins, locks of hair, and a goblet.

The seller had reportedly lost hair, smelled mysterious odors, and had his home infected by insects shortly after acquiring the box. Haxton started doing research on the dybbuk and spoke both to rabbis and scientists about why the box could be making him feel ill. They all told him the same thing: Put the box in a wooden container lined with gold.

When he did, his medical issues subsided.

He eventually sold the film rights to his story of the haunted dybbuk box, which was turned into the film The Possession in 2012 — and eight years later, the dybbuk box, now in the Haunted Museum, was the subject of an episode of Ghost Adventures hosted by paranormal investigator Zak Bagans. 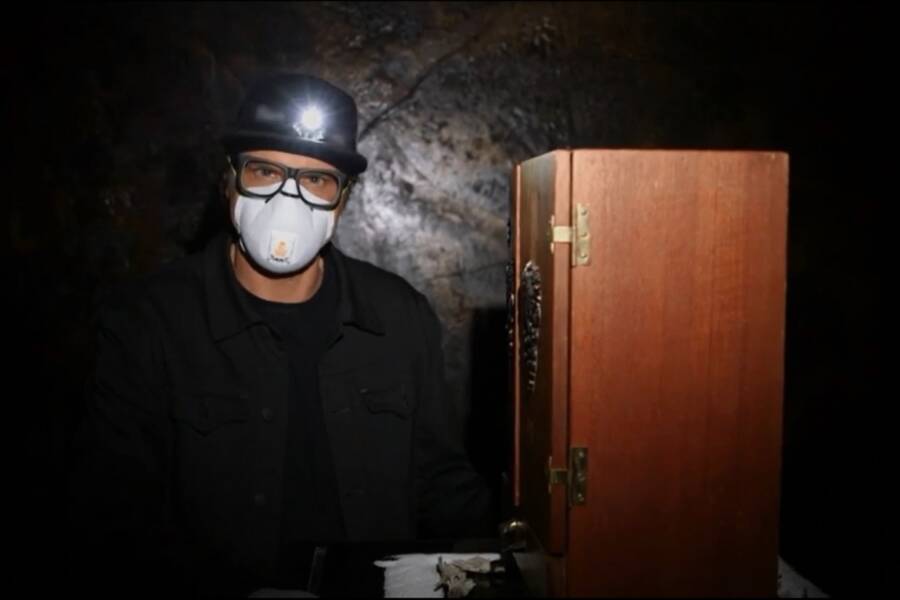 IMDbInvestigator Zak Bagans standing next to the Dybbuk box on the Travel Channel’s Ghost Adventures.

Two years before that episode, musician Post Malone visited the Haunted Museum and touched the dybbuk box — later blaming it for a series of unfortunate events that befell him, including an emergency plane landing, a home robbery, and a car crash.

Whether these events were truly the work of a malevolent spirit or random happenstance, the long history of the dybbuk has certainly been a source of paranormal paranoia, even in the modern age.

After this look into the legend of the dybbuk, read the chilling tale of the banshee of Celtic lore. Or, explore the terrifying story of La Llorona, the vengeful spirit of the southwest.