Thomas Edison was long credited as the inventor of recorded sound — that is, until a 2008 discovery. 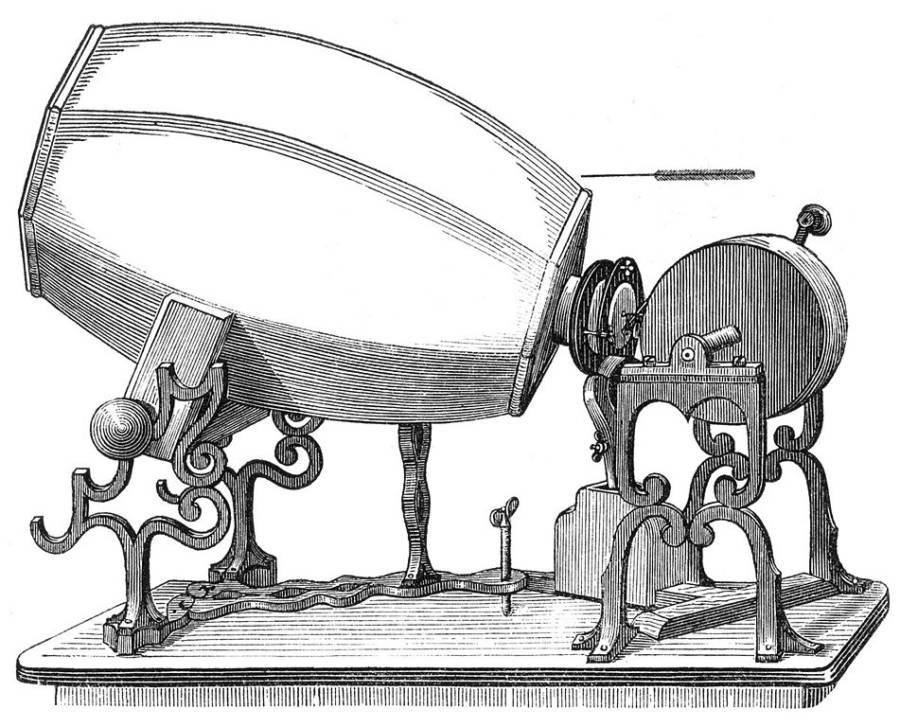 As we’ve argued before, receiving credit for an invention has as much to do with good timing as it does the act of making the thing itself. This is especially true for Edouard-Leon Scott de Martinville, a French inventor who created a recorded sound device decades before Thomas Edison would win intellectual “ownership” of that very feat. And the reason for this is quite simple: Edison made his device at a time when the idea of recorded sound was actually conceivable.

For well over a century, de Martinville’s recordings gathered dust in a smattering of French institutions. In 2008, however, the music research organization First Sounds decided to examine some of them.

That year, researchers Patrick Feaster and David Giovanni located six pieces made between the years of 1853 and 1860, one of which they successfully played back, and which thus affirmed that de Martinville had indeed recorded sound before Edison did with his phonograph.

Like Edison’s invention, de Martinville’s instrument — which he called a phonautograph and which he patented on March 25, 1857, two decades before Edison’s phonograph — had a large funnel meant for “catching” sounds.

Unlike Edison’s invention, the device wasn’t intended for listening to recorded sound, but to visualize the recorded sound by “inscribing” the vibrations — which would later be called sound waves — onto paper.

Though de Martinville had technically done the innovating years before Edison would receive credit for it, his invention would never catch on. And that’s mainly because he never thought to play his recordings back.

Indeed, with his phonautograph, de Martinville simply endeavored to do for the ear what the camera did for the eye: turn sound into a “visual” object which could be studied — and made permanent — through the phonautogram, the name he gave to the physical etching of sound vibrations on paper.

As he would write of his phonautograms, “Will one be able to preserve for the future generation some features of the diction of one of those eminent actors, those grand artists who die without leaving behind them the faintest trace of their genius?”

The answer, of course, was yes, but it would be the record — and later the tape, CD, and MP3 — that preserved music, not the phonautograph. De Martinville isn’t exactly to be faulted for not seeing that, though.

Until Alexander Graham Bell received a patent in 1876 for the telephone, the idea of sound coming from anything but a living body was simply unfathomable. Picture hopping a Delorean back to a 1730 Bach performance and telling the audience that one day they wouldn’t have to leave their homes at all in order to hear the Brandenberg Concerto.

With no past acknowledgment of sound waves’ existence — let alone their ability to be recorded — how could anyone conceive of “playing” them back?

Thus, although historians today regard de Martinville’s invention as a significant moment in the development of recorded sound, consumers at the time simply didn’t see much use in it — aesthetically or scientifically. As such, both de Martinville and his pioneering device died without, incidentally, making much noise.

In 2011, for instance, the Library of Congress officially inducted all of his recordings into The National Recording Registry. UNESCO followed in 2015 with an induction into The International Memory of the World Registry, finally solidifying Edouard-Leon Scott de Martinville’s rightful place as the true inventor of recorded sound.

In other words, de Martinville did leave his “trace of genius” behind, it simply took the world a little while to figure out what that genius was.

Next, learn about the people behind some very important inventions — people who were overlooked because of their gender.