Edward A. Carter: The Heroic Soldier Who Was Denied A Medal Of Honor Because Of His Race

He was demoted, discriminated against, and gravely injured. Perhaps worst of all, he wasn't recognized for his outstanding service until it was too late. 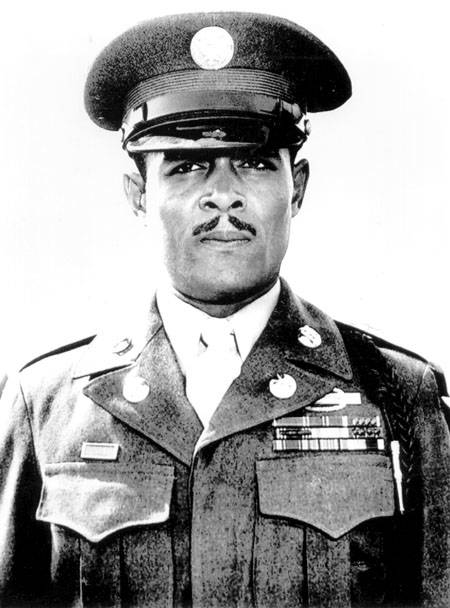 During World War II, Edward A. Carter Jr. singlehandedly took out eight Germans and was wounded five times. But racism was still rampant in the U.S. Armed Forces and so Carter — despite his unfailing heroism — was not awarded a Medal of Honor or the recognition he so rightly deserved for another 60 years. By then, though, it was too late for Carter to receive it.

Carter got his first taste of battle when he was just a teenager. Born in Los Angeles in 1916 to a pair of missionary parents who relocated to Shanghai, Carter ran away from home at just 15 to enlist with the Chinese Army. He had astoundingly reached the rank of lieutenant before his superiors realized he was underage and sent him home. Carter’s desire to fight pushed him to enroll in a Shanghai military school, where he honed his combat skills and learned Hindi, German, and Chinese.

Carter then joined up with the Abraham Lincoln Brigade, an American volunteer unit fighting against fascism in the Spanish Civil War. When he returned to the United States in 1940, he settled in Los Angeles and enlisted in the United States Army. He also met and married Mildred Hoover and together they had two sons, Edward III and William.

By 1942, Carter and his whole family moved to Fort Benning in Georgia where he was initially assigned the role of cook in the military. Indeed, racism in the military proved a hindrance in his advancement in the army.

Despite the bravery shown by black soldiers during World War I, the U.S. army still clung to the idea that black soldiers were unsuitable for battle, thus African Americans in the army were relegated to non-combat duties.

Edward Carter resented the fact that, as he told his daughter-in-law Allene, “[white soldiers] felt that the black soldiers should have a mop and a bucket”, but he kept his feelings to himself. “He knew how to play the game”, Allene recalled.

Within a year Carter had impressed the white officers enough to earn the rank of staff sergeant. Despite his rapid advancement, Carter longed to get back on the battlefield. Soon, thanks to Hitler, he would finally get his chance. 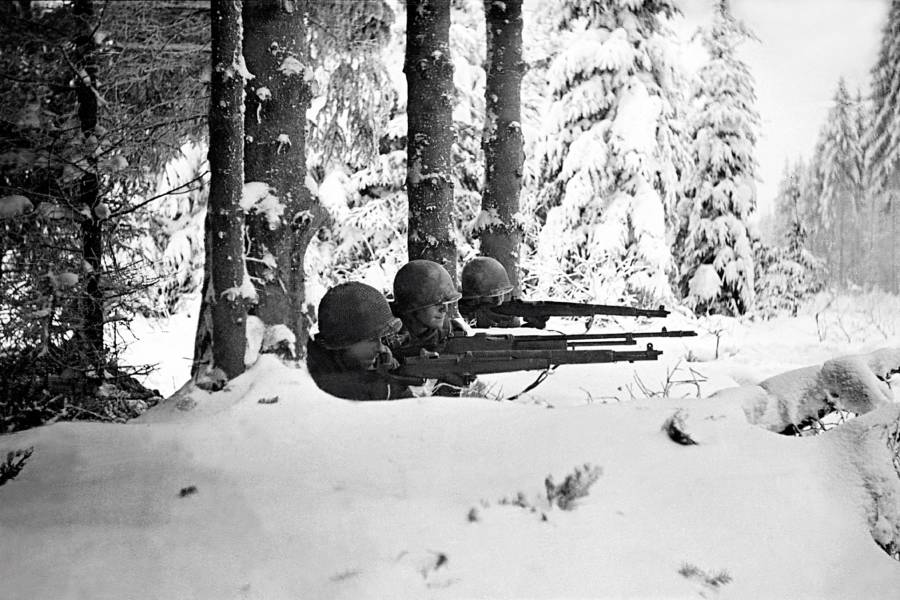 Three U.S. infantrymen in the snow during the Battle of the Bulge, Ardennes, Belgium, January 1945.

In 1944, Edward A. Carter Jr. gave up his sergeant’s stripes as he was shipped to Europe and assigned to a division which transported supplies to the front. He volunteered for combat multiple times but he was denied.

It wasn’t until 1945 that the U.S. military became desperate enough to finally allow African-Americans to join the front lines and Carter was finally assigned to the 12th Armored Division where Company commander Captain Floyd Vanderhoff recognized his impressive military background and made him an infantry squad leader. 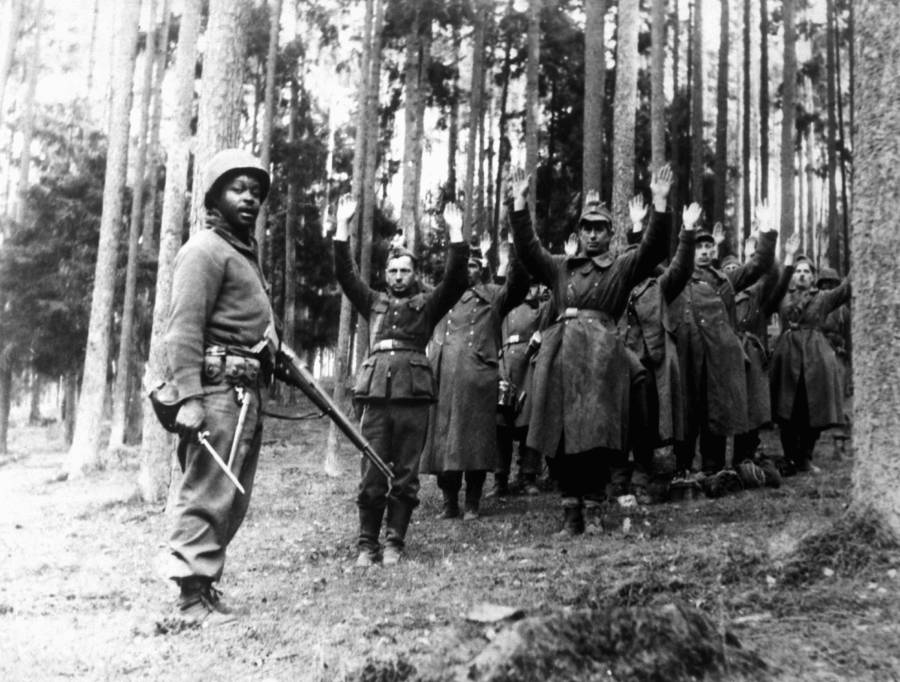 While there Carter became a member of General Patton’s “Mystery Division,” a division of fearless soldiers and one of the few which integrated African-Americans into combat. There Carter was promoted to Patton’s personal bodyguard.

On March 23, 1945, Edward Carter and his division made their way towards the town of Speyer in Germany. Although the Allies had finally broken into their homeland, the Germans were still not ready to give up the fight. Carter’s convoy suddenly began to take on heavy fire. Without hesitation, Carter volunteered to lead three men across an open field and take out the German gunners. The four men raced towards the enemy position, but due to the lack of sufficient cover, two were killed nearly immediately and the third was wounded.

Carter continued on his own and drew German fire onto himself as he encroached upon them. He was shot five times, but in a display of nearly inhuman resilience, Carter managed to push forward and kill six of the eight Germans firing on him.

He was then able to capture the remaining two and used their bodies as a shield to maneuver across the field and interrogate them in their own language. Carter gleaned valuable information then that would allow the Americans to continue their advance.

According to the Department of Defense, the Medal of Honor is awarded to individual soldiers who “distinguish[es] himself conspicuously by gallantry and intrepidity at the risk of his life above and beyond the call of duty.”

Edward A. Carter Jr.’s actions certainly fulfilled these criteria, as Carter was nominated for the award. However, because of his race, Carter received the Distinguished Service Cross, the country’s second-highest military honor. 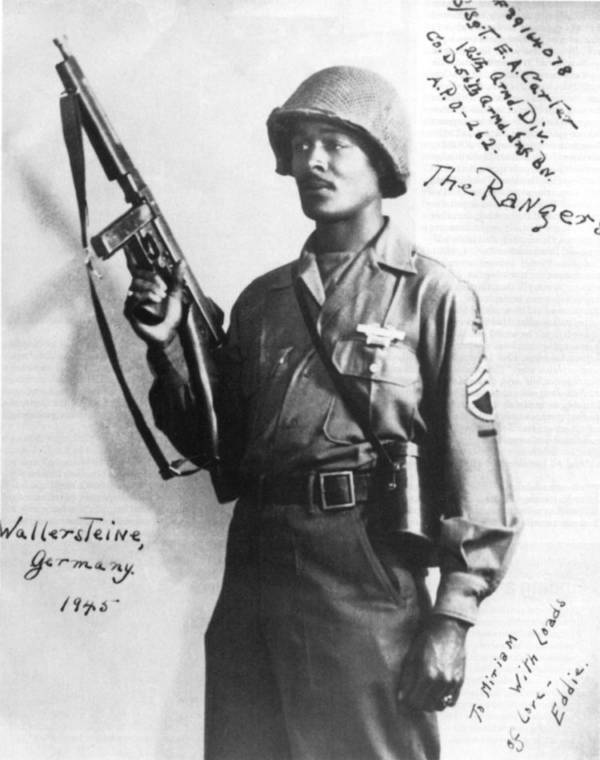 MilitaryMuseum.orgEdward A. Carter after the war, displaying his Combat Action Ribbon and Purple Heart.

Edward Carter went AWOL from the hospital only a few weeks later to rejoin his unit and finish out the war. He returned home to California in 1946 and eventually re-enlisted. He served a three-year tour as a sergeant first class, and the Army chose him to train a new National Guard engineer unit made up entirely of African Americans.

But then the Red Scare had begun to take root in America. Carter was denied re-enlisting because of his “exposure to Communism” when fighting in Spain and China. The former soldier spent the rest of his days as a family man working in the vehicle tire business.

Edward Carter Jr. passed away from lung cancer on Jan. 30, 1963 and was buried in Los Angeles.

In the mid-1990s, nearly three decades after Carter’s death, army researchers noticed the odd disparity in the number of black soldiers who had served during World War II (over a million) and the number of black soldiers who had received the medal of honor during the conflict (zero). After a Congressional review, Carter’s Distinguished Service Cross was upgraded to a Medal of Honor in 1997 along with a formal apology from President Clinton.

Staff Sgt. Edward A. Carter Jr. was re-interred with full honors at Arlington National Cemetery in 1997.

After this look at the heroism of Edward A. Carter Jr., read about the African American World War I hero who was awarded the Medal of Honor, Henry Johnson. Then, learn about Adrian Carton de Wiart, the soldier who couldn’t be killed.