After they were abandoned by the rest of their expedition in 1910, Ejnar Mikkelsen and one inexperienced crewmate were forced to spend 28 months alone in the Arctic wilds of Greenland.

In 1909, Danish polar explorer Ejnar Mikkelsen set out on a mission to recover the lost maps and journals of a doomed Arctic expedition to the northeast coast of Greenland. But it would take him three years for him to make it back home.

In 1891, explorer Robert E. Peary outlined the eastern coast of Greenland and mapped a channel separating what he believed to be an island he called Peary Land from the mainland, allowing America to make a claim on the island. This led determined Danish sailors on a fatal voyage to dispute that claim in 1907 — and Ejnar Mikkelsen on a quest to find them. 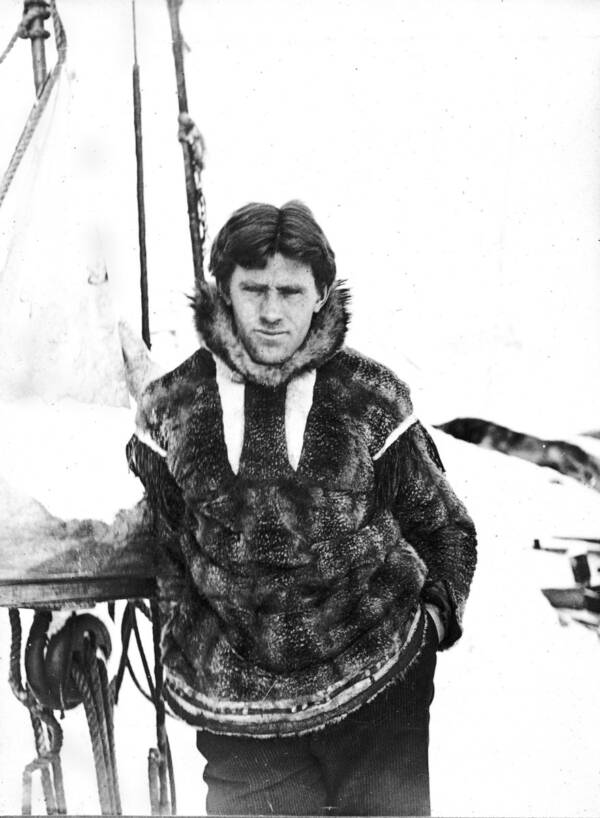 Wikimedia CommonsEjnar Mikkelsen in 1907, two years before his fateful voyage to Greenland.

But in August 1909, Mikkelsen’s ship would get trapped in Arctic ice some 200 miles from where he believed his predecessors had died. According to his autobiography Two Against the Ice, Mikkelsen began the journey with six men but would be abandoned by all but one novice crewmate — and endured two winters in the Arctic.

Since adapted into the Netflix movie Against the Ice, the book attempted to convey some semblance of how harrowing the world of exploration in the early 1900s was. From frostbite and scurvy to predatory wildlife, Ejnar Mikkelsen and Iver Iversen endured terrifying hardship to survive.

The Seafaring Youth Of Ejnar Mikkelsen

Born on December 23, 1880, in Vester-Brønderslev, Denmark, Ejnar Mikkelsen gravitated to the seas since he was a child. Raised by generations that had risked their lives in treacherous expeditions, he grew up with tales of Arctic adventure and unprecedented discoveries. It soon became a lifelong passion to do the same. 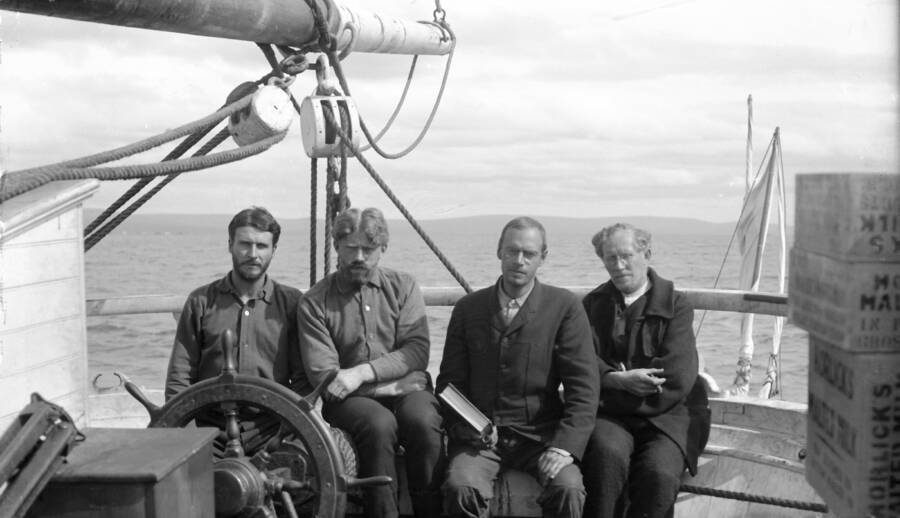 Mikkelsen was only 14 years old when he set sail for the first time on his own. While invigorating, he would not be satisfied until he became a true sailor. In 1896, he purportedly walked 320 miles from Stockholm to Gothenburg to convince Swedish explorer Salomon August Andrée to take him on his Arctic balloon flight.

Ejnar Mikkelsen wouldn’t know it yet, but he was lucky to be rejected. Andrée’s perilous journey ended fatally in October 1897 when the hydrogen balloon failed to reach the North Pole, and all three of its passengers died. In 1900, however, Mikkelsen was welcomed aboard Sir George Carl Amdrup’s expedition to eastern Greenland.

Mikkelsen and four others, including U.S. geologist Ernest de Koven Leffingwell, ended the 500-mile trip in 1902 by surveying a famously inaccessible coastline for the first time. The following year, he served as the cartographer on Evelyn Baldwin’s expedition to Franz Josef Land, an Arctic archipelago used only by the Russian military today.

In 1906, Leffingwell’s father sponsored an Arctic expedition to map land that whalers had reportedly spotted in the Beaufort Sea north of Point Barrow, Alaska. With $5,000 and an engine-less schooner, they set out to find it — but were forced to stop at Flaxman Island 200 miles from their goal. 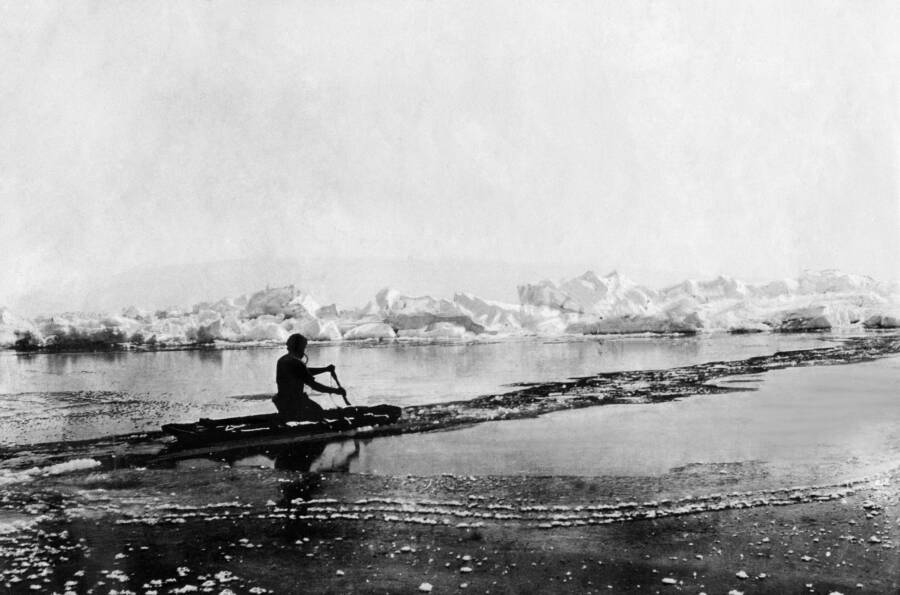 Ullstein Bild/Getty ImagesEjnar Mikkelsen during the the Anglo-American polar expedition of 1906-1907.

Fortuitously befriending the local Inuk Sachawachiak people, they learned how to drive dogs across the ice and set out in February 1907. After traversing 120 miles over 60 days, the duo believed the route fatal and returned — only to find their ship had sunk. While Leffingwell stayed behind to study the ice, Mikkelsen had other plans.

Taking his chances to make it back home, Mikkelsen trekked all 2,300 miles on sled and by foot. Passing through Point Barrow and Nome, he continued through Fairbanks, Valdez, and the Gulf of Alaska. His return heralded the arrival of a truly seasoned explorer — although Ejnar Mikkelsen’s biggest challenge was yet to come.

The Expedition To Recover Lost Maps In Greenland

The ill-fated Danmark expedition of 1907 saw Ludvig Mylius-Erichsen, Niels Peter Høeg-Hagen, and Jørgen Brønlund set out to prove that Greenland was a single unified island that belonged exclusively to Denmark. 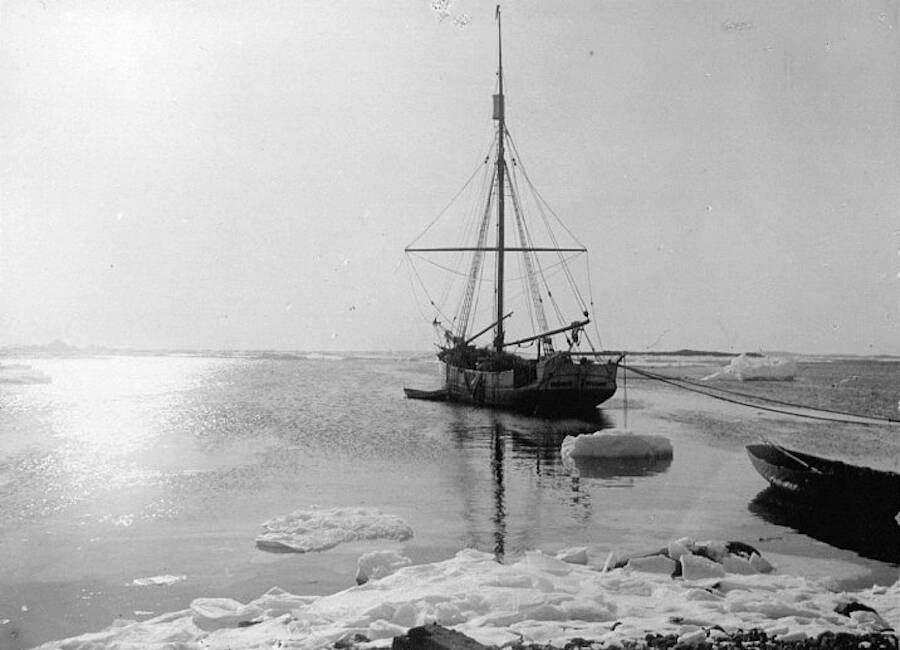 Wikimedia CommonsEjnar Mikkelsen’s ship Alabama in the summer of 1909.

But in doing so, they relied on Robert E. Peary’s maps of northeast Greenland, which included the hypothetical “Peary Channel” dividing the region in two. Misled by the incomplete maps, even as they sought to disprove them, the men became lost in the Arctic and were soon trapped in the ice.

While Brønlund’s body was found in 1908 with his maps and diary, Mylius-Erichsen and Høeg-Hagen’s never were. As a Dane and fellow explorer, Ejnar Mikkelsen couldn’t decline when British newspaper magnate Lord Northcliffe offered to finance a 1909 expedition to locate them.

Patriotic to the core, however, Mikkelsen demanded that the trip be financed with Danish money. His government agreed to fund half the cost and let the public raise the rest. Mikkelsen chose a crew of six men and a 45-ton sloop named Alabama that ran on a 15-horsepower engine. It departed Copenhagen on June 20, 1909.

While Lieutenants Vilhelm Laub and C.H. Jørgensen, shipmates Hans P. Olsen and George Poulson, and carpenter Carl Unger were suited for the job, Mikkelsen’s mechanic turned out to be an incompetent alcoholic. En route to Greenland, the Alabama stopped in Iceland where a young mechanic named Iver Iversen volunteered to replace him. 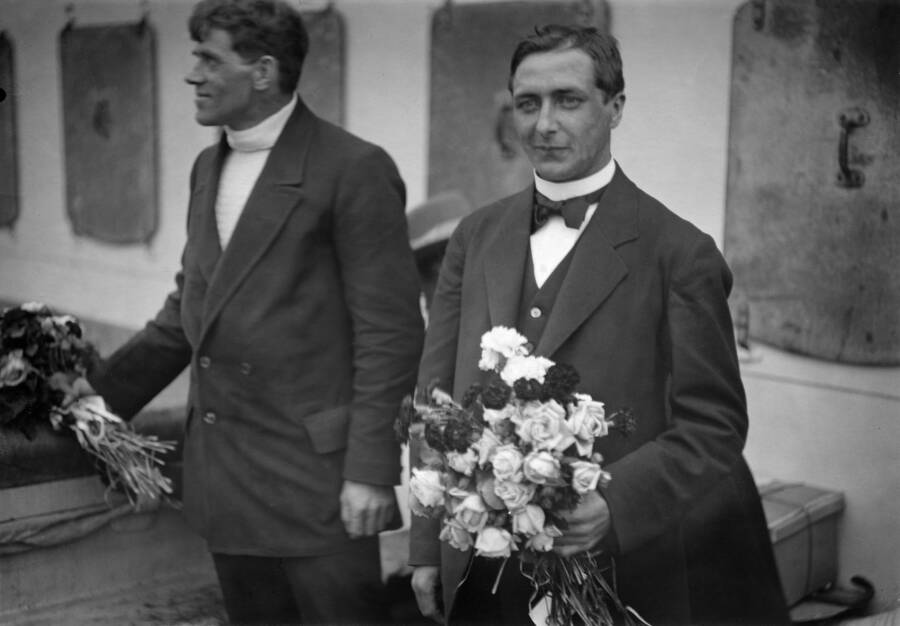 Ullstein Bild/Getty ImagesEjnar Mikkelsen (left) and Iversen (right) were hailed as heroes when they finally returned to Copenhagen in 1912.

When they arrived in the Faroe Islands, the expedition suffered a setback. They had planned to board dogs that would allow them to drive across the ice in Greenland, but the animals they had contracted were infected with rabies. While they found replacements on Ammassalik Island, their arrival in Greenland was delayed until late August.

At the tail-end of summer, the wooden sloop became trapped in the ice of Shannon Island. On Aug. 27, 1909, Mikkelsen was forced to have his crew establish their quarters on land. Ominously, they were now 200 miles from the Danmarkshavn site where Mylius-Erichsen had reportedly wintered before dying.

On Sept. 25, Ejnar Mikkelsen and Iver Iversen set out while the rest of their crew stayed behind. After finding information that the other crew members had made it some 500 miles farther north, they returned to the Alabama for the winter, determined to set out the following spring.

How Ejnar Mikkelsen And Iver Iversen Battled Against The Ice

As chronicled in his 1913 book Lost in the Arctic, Ejnar Mikkelsen and Iver Iversen left the ship once again in March 1910. By May, they had found the diary of Mylius-Erichsen and confirmed that Peary Channel did not exist, however, their struggles had just begun. 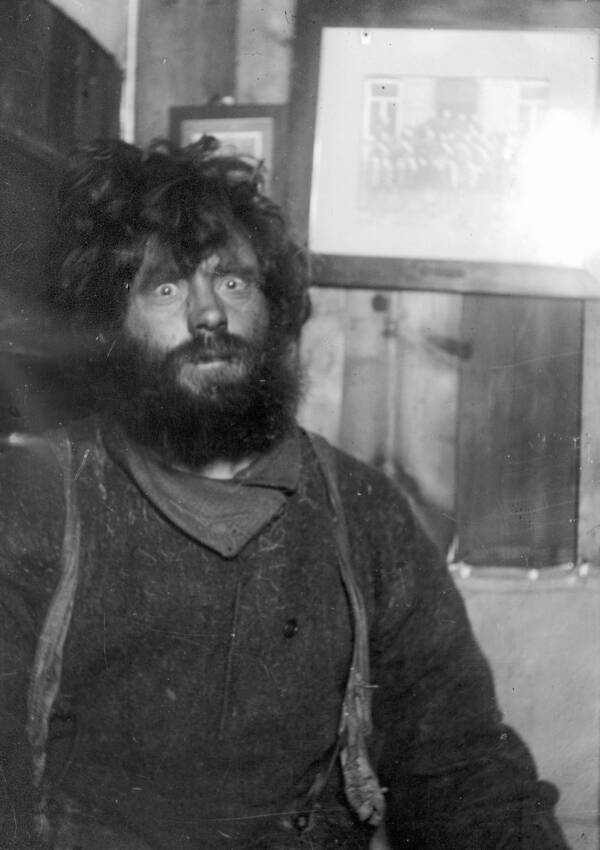 Arktisk Institut/Public DomainEjnar Mikkelsen in 1912, shortly before he and Iver Iversen were rescued.

Summer had arrived, and the ice they had traversed by sled to get to the site was melting fast. It took them eight months to return to the ship. Along the way, they’d resorted to eating their sled dogs to survive and suffered daily hallucinations after the last of their dogs died.

When they finally made it back to the Alabama, they found they had been abandoned by their shipmates, who found passage home aboard a sealing vessel.

Ejnar Mikkelsen and Iver Iversen would be forced to endure two further winters in Greenland — surviving on abandoned rations from previous expeditions and evading predatory wildlife.

The explorers used their quarters on Shannon Island as long as they could, but it would prove insufficient for the long winter ahead. So they used timber and planking from Alabama wreckage to construct a small cottage. When it appeared as though all hope was lost, the two men were rescued on July 19, 1912, by Norwegian steamer Sjøblimsten.

Not dissuaded from adventure, the Danish explorer led an expedition to the Sermersooq municipality in eastern Greenland in 1924. Then, he settled what became one of the most remote inhabited places on Earth, which was henceforth known as Scoresbysund and had no more than 345 residents in 1920. 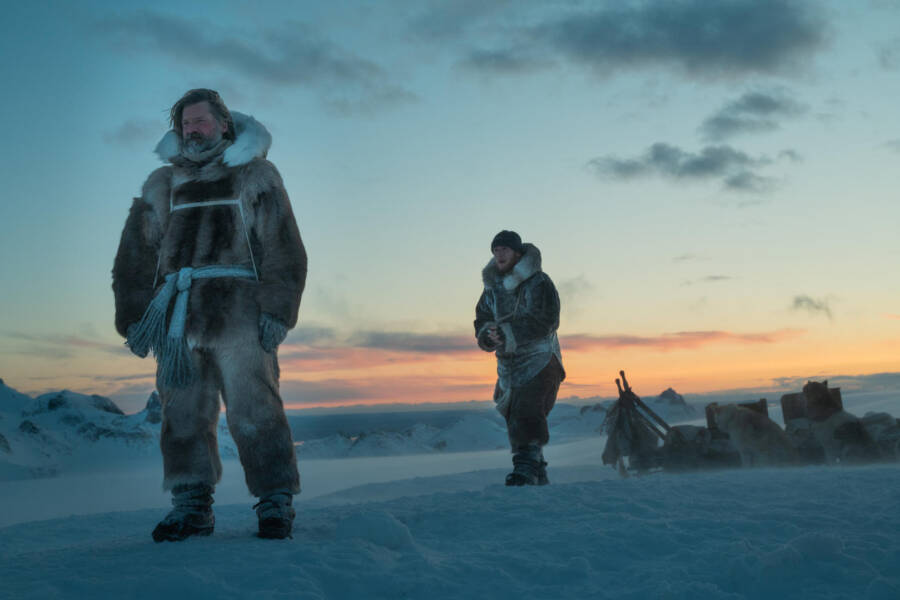 NetflixNikolaj Coster-Waldau (left) as Ejnar Mikkelsen in Two Against the Ice.

In 1932, he led a crew of eight on the “Second East-Greenland Expedition” to clarify the geological area between Cape Dalton and Kangerdlugsuak.

And wherever Mikkelsen went, he recounted his harrowing adventures in numerous books, one of which has now become a Netflix film about his winters stranded in Greenland. Called Against the Ice, the film stars Nicolaj Coster-Waldau as Mikkelsen and premieres March 2, 2022.

On Ejnar Mikkelsen’s 90th birthday in 1970, he was given a national tribute by the Danish government. He died mere months later, on May 1, 1971. With a Danish patrol vessel and Greenland mountain range named after him, the explorer had truly become the kind of famed adventurer he dreamed of as a child.

After learning about Ejnar Mikkelsen, read about the lost Franklin Expedition that ended in cannibalism. Then, take a look at these incredible 100-year-old Antarctic exploration photos.