In 1872, Elijah McCoy created a tiny device that automatically lubricated steam engines while they were running — and revolutionized the railroad industry in the process.

One year before the Civil War broke out, Elijah McCoy crossed the Atlantic to attend a Scottish university. McCoy’s parents were born enslaved, but they escaped to Canada via the Underground Railroad. That gave the 15-year-old the freedom to pursue his dream of becoming a mechanical engineer.

Eight years of rigorous training prepared McCoy for a career as an engineer. But when he returned to America after the Civil War, McCoy could not find a job. Companies weren’t willing to hire Black engineers. 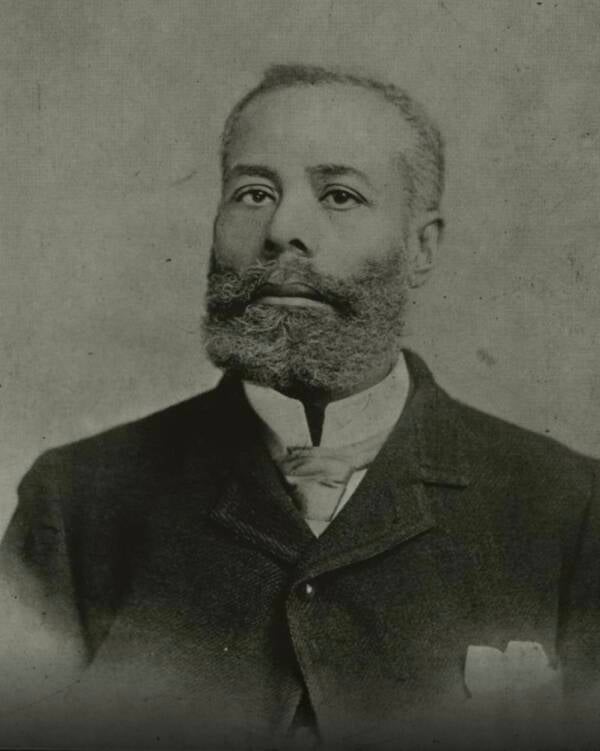 Ypsilanti Historical SocietyInventor Elijah McCoy trained in Scotland but couldn’t find a job as an engineer in the United States.

Instead, McCoy was forced to take a job as a railroad laborer, but the engineer refused to give up.

He went on to make a groundbreaking invention that changed railroad history. And that was just the start for Elijah McCoy.

Who Was Elijah McCoy?

Before Elijah McCoy’s birth on May 2, 1843, his parents fled enslavement. George and Mildred McCoy escaped bondage in Kentucky and traveled north on the Underground Railroad. They reached Ontario, Canada, where they welcomed Elijah into their family.

In 1847, the McCoys left Ontario for Michigan. Soon, young Elijah showed an aptitude for mechanics. At just 15 years old, McCoy traveled from Michigan to Scotland, where he trained as an engineer at the University of Edinburgh.

According to the university, McCoy completed an apprenticeship program in engineering and earned his certificate as a mechanical engineer. The process was arduous – altogether, McCoy spent eight years training as an engineer.

The young engineer moved back to Michigan to look for work. The year was 1866 – the Civil War had just ended, and the 13th Amendment had abolished slavery months earlier.

But as a Black man, McCoy could not find an engineering job.

In the post-Civil War era, Black men and women were still excluded from professional jobs. For Elijah McCoy, that meant he struggled to find work as an engineer.

No company was willing to hire a Black engineer. Even after the end of slavery, and even in the North, white employers believed that Black workers were only suited for manual labor. 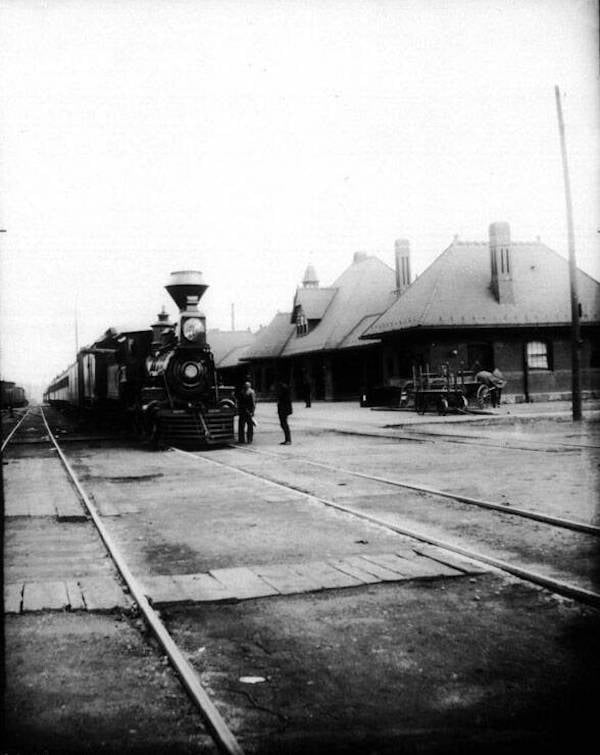 Instead of working as an engineer, McCoy took a job at Michigan Central Railboard as a fireman and oiler.

McCoy’s work was labor-intensive and taxing. At the time, locomotives required frequent manual oiling, according to the Detroit Historical Society. The trains would pull into roundhouses where McCoy and his fellow oilers applied lubricant to the axles and other moving parts.

Steam locomotives were so fast that they quickly burned through the lubricant. That meant trains had to stop frequently for maintenance — a costly and time-consuming problem.

But as an engineer working as an oiler, Elijah McCoy quickly developed a solution to the problem. McCoy created a lubrication cup that evenly and automatically distributed oil across every moving part. Instead of frequently stopping for maintenance, locomotives could run for significantly longer.

McCoy’s invention was an instant hit. The “oil drip cup,” as it was known, became a standard tool in every train. Steamships and other heavy machines also used McCoy’s automatic lubricator. 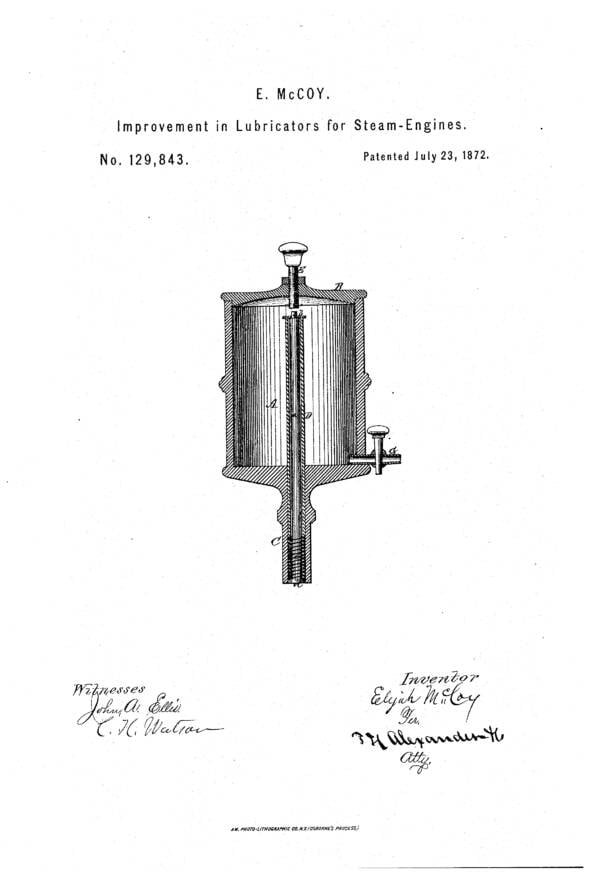 U.S. Patent OfficeElijah McCoy’s first patent, which was for a lubricating tool, came in 1872.

Fortunately, McCoy filed a patent on his invention in 1872. But the young railroad worker could not afford to produce the lubricators himself. So he handed over the rights to manufacture the product to others.

An invention that should have made McCoy rich left him still working on the railroad.

Engineers would ask for “the real McCoy” – and soon, the phrase became popular to describe any genuine article over a cheap knockoff.

Elijah McCoy continued to work on the railroads. He perfected the lubricating cup and continued to patent his innovations.

But McCoy’s profits were limited. Since he lacked the funds to produce the lubricators on his own, McCoy assigned his patent rights to the railroad company. Later, he sold patents to investors to raise money.

While many of McCoy’s patents came from railroad-related inventions, the engineer also patented work in other areas. He created a portable ironing board inspired by his wife and a lawn sprinkler. McCoy also created a rubber-soled shoe. 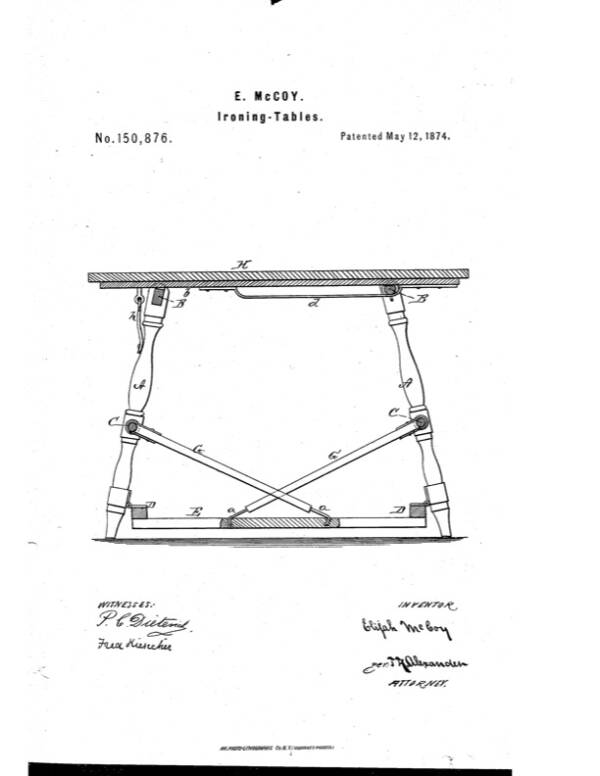 Old age didn’t stop McCoy from making groundbreaking inventions. According to Smithsonian Magazine, in 1916, at the age of 72, McCoy patented a new “graphite lubricator.” The updated model used a mix of oil and graphite that improved efficiency for the 20th-century engines that ran even hotter than their predecessors.

Although Elijah McCoy received his first patent in 1872, it took him nearly 50 years to raise enough funds to start his own company. In 1920, McCoy created the Elijah McCoy Manufacturing Company. The lubricating cup he had invented half a century earlier would now bear the name of its creator.

In 1922, just two years after opening his own company, McCoy and his wife were in a car crash. The collision killed McCoy’s wife and left him with serious injuries. Unable to work, the inventor died impoverished seven years later at the Eloise Infirmary outside of Detroit at the age of 85.

The Legacy of Elijah McCoy, ‘The Real McCoy’

During his lifetime, Elijah McCoy received little acknowledgment outside of trade publications and African American newspapers for his work. His inventions rarely carried his name. And though he became a consultant for engineering firms, McCoy still could not find a company willing to hire a Black engineer.

But Black Americans celebrated McCoy. In 1909, Booker T. Washington praised McCoy as the Black inventor with the most patents up to that point, according to the Detroit Historical Society. 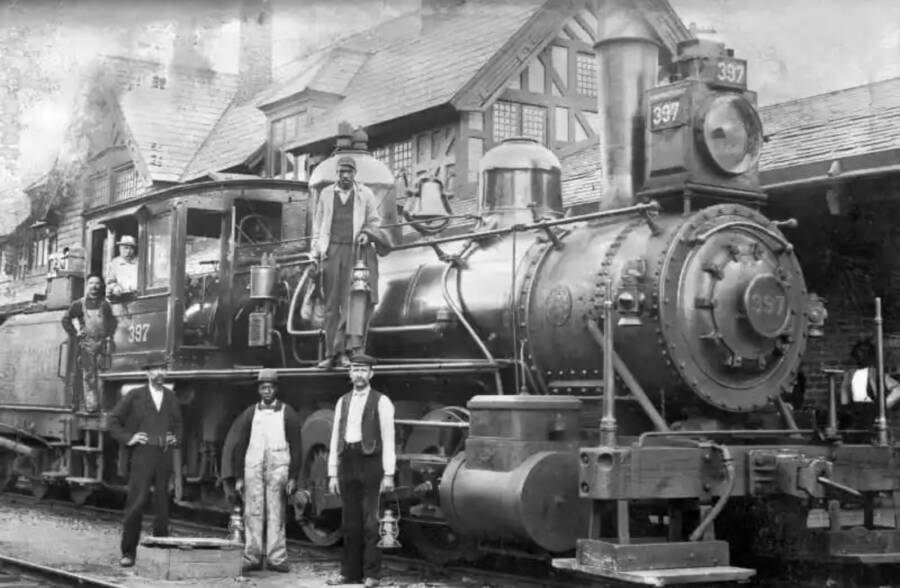 After his death, McCoy was finally recognized as a pioneering inventor. In the 1970s, the state of Michigan put up a historical marker outside McCoy’s home, and the city of Detroit named a street after the inventor.

Although racism prevented Elijah McCoy from working as an engineer, prejudice could not halt McCoy’s prolific inventions. And while the engineer received little reward for his patents during his life, today, McCoy is celebrated as a pioneering Black inventor.