Meet Emma Of Normandy, The Formidable Queen Who Steered England Through The Viking Age

Queen Emma of Normandy navigated both political instability and Viking usurpers on her way to becoming the richest and most powerful woman in England. 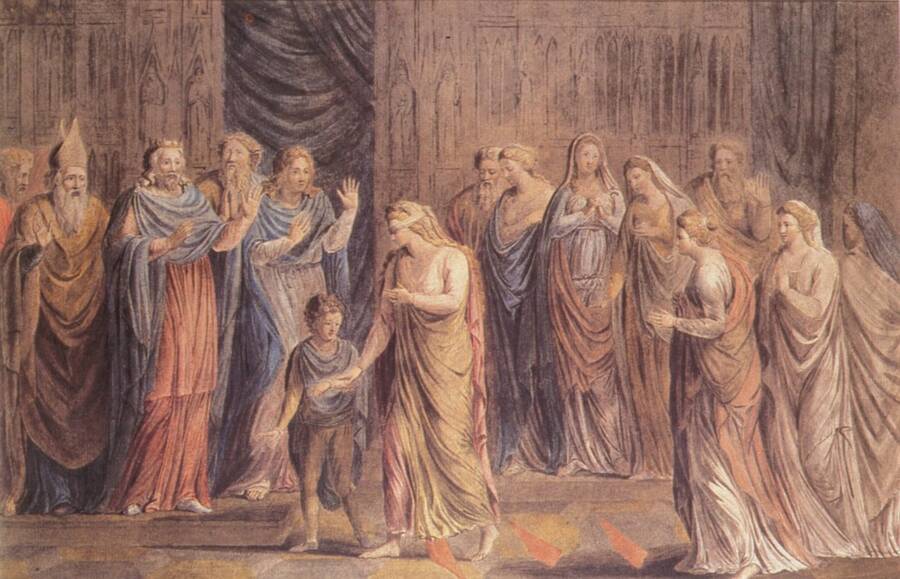 It has been said that behind every great man is a great woman, and Emma of Normandy was no exception. And at times, she was well ahead of them. Married to two kings of England, her political maneuverings helped guide the country through the Viking age and ensured that her sons would maintain the crown.

Emma of Normandy first became a queen when she was just a teenager. Descended from Norman Vikings, her father was Richard I, Duke of Normandy, and she was married off to King Aethelred II of England in 1002.

At the time, England was under constant threat of invasion by Viking forces from France that terrorized the people. The lack of a resolute response saw the king called “Aethelred the Unready. And he hoped his political union with the House of Normandy would ease those tensions.

But by the time she was scarcely 30, Aethelred was dead, and Emma needed to secure her status. So she married the man who stole his crown, the Danish king Cnut the Great. And from there, her influence only grew. At a time when women were deemed mere nurturers, her achievements in politics, religious order, and Norman-English relations broke the mold and remain historic.

Born around 984 C.E., Emma of Normandy would enter the world of politics at a young age. She was raised in northern France, where Viking influence had grown drastically and where many of the raids on England by these relentless Norsemen were based. Ultimately, many from both sides sought compromise. 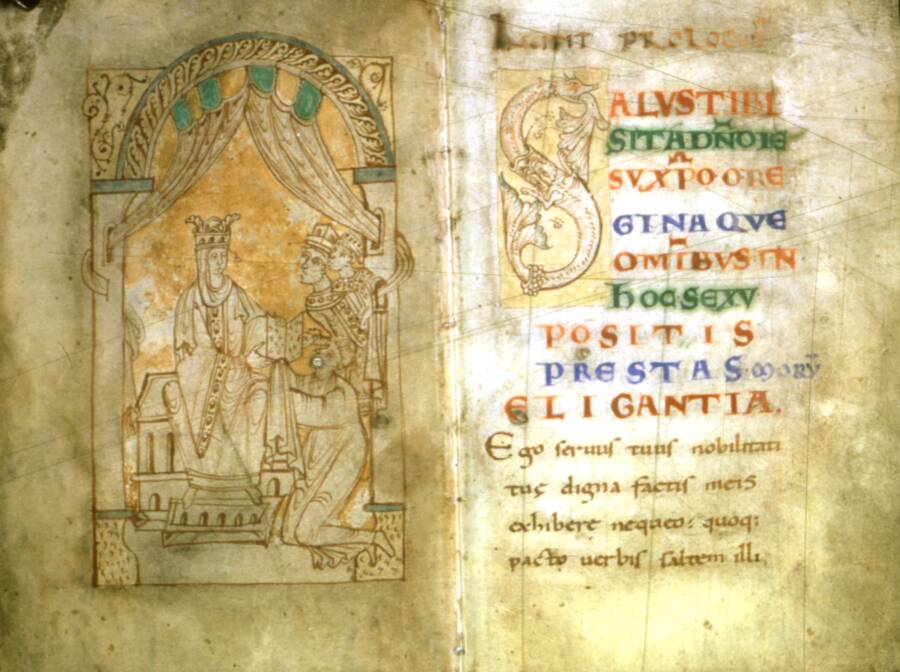 Photo12/UIG/Getty ImagesQueen Emma and her sons as illustrated in the Encomium Emmae Reginae from the mid-11th century.

Her father, Richard I, Duke of Normandy, was desperate to improve his standing with the English since the House of Normandy lacked the necessary political ties to bolster its influence. For King Aethelred the Unready, also known as Aethelred II, a union between the regions could unite them against a common Viking threat — and improve his own reputation.

Arranged in 1002, the political match saw Emma of Normandy cross the English Channel and marry a man some 20 years her senior. King Aethelred II had been married once before, but his first wife had died young after providing him with 10 children. This would later only complicate the chain of succession.

Eager to expel all Danes, King Aethelred II orchestrated the St. Brice’s Day Massacre on the outskirts of northern England. Esteemed figures like Gunhilde, sister of Denmark’s King Sweyn I, were killed. While Emma focused on producing offspring, the results of that event would follow her. 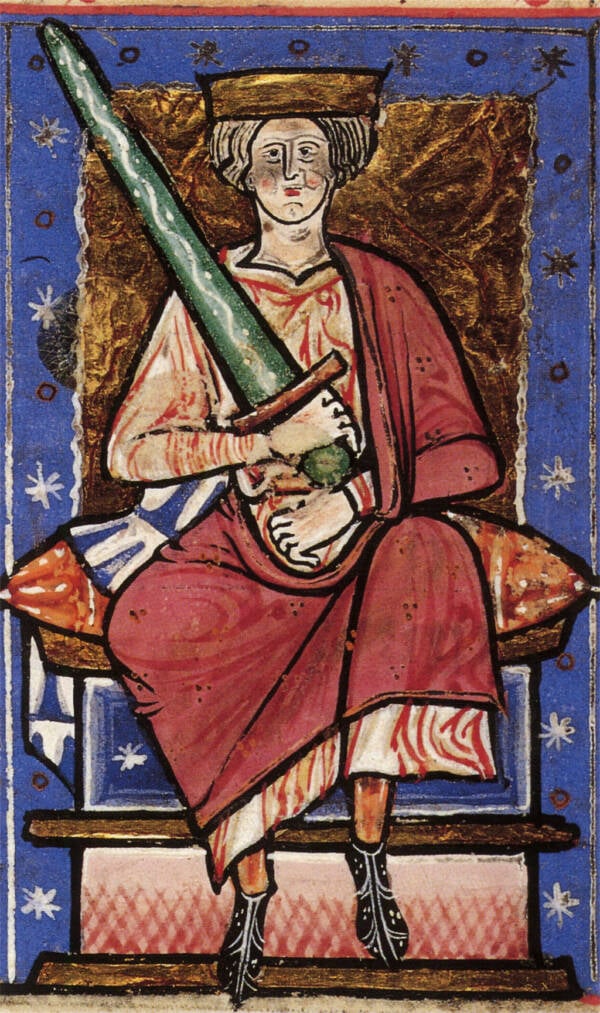 Wikimedia CommonsAethelred the Unready as illustrated in The Chronicle of Abindon (1220).

King Sweyn’s Viking invasions in the first decade of the 11th century would last three years and see Emma flee to Normandy by 1013. King Aethelred, himself, was forced to escape to the Isle of Wight — while King Sweyn successfully took England over. Though Sweyn would die in 1014, Queen Emma’s return was anything but peaceful.

King Aethelred’s death in 1016 put Emma’s future in jeopardy. While the practice of primogeniture was not yet implemented officially, Aethelred’s offspring from his first marriage nonetheless took precedence over Emma’s. His eldest son, Edmund Ironside, had already begun maneuvering for control.

Ironside had agreed with the son of Sweyn, Cnut the Great, to divide England in half and rule jointly. But Ironside died in 1016, and their agreement led Cnut to wrestle total control of the country — and marry the widowed Queen Emma to retain some semblance of stability. 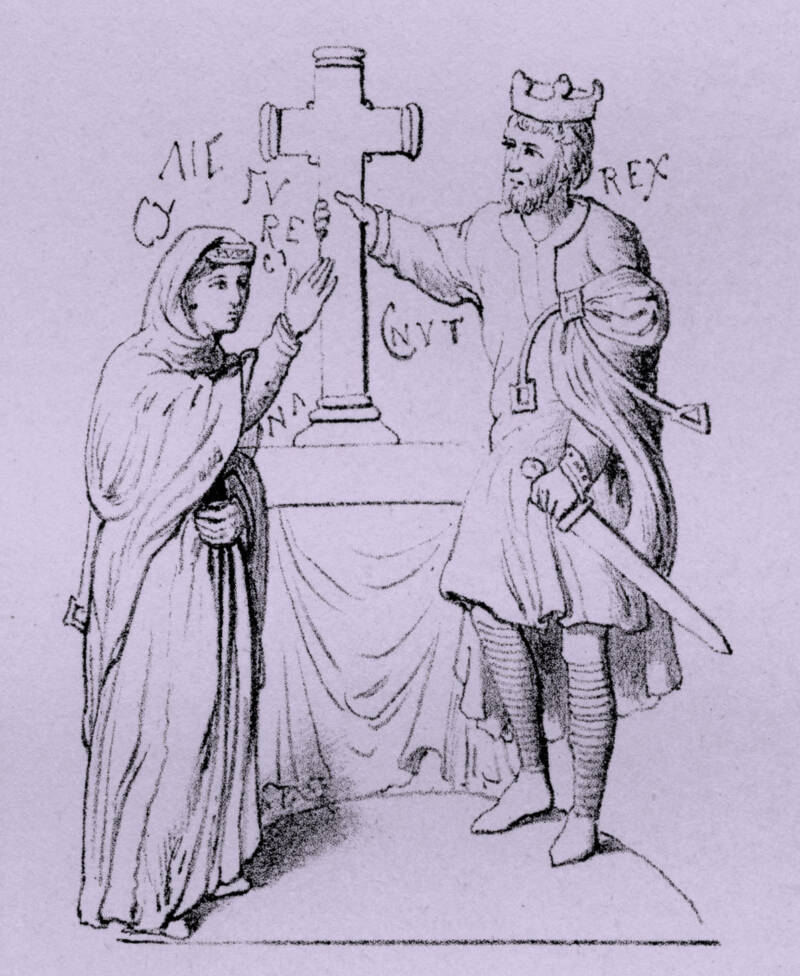 She allegedly married him on the condition that Cnut spare her sons with Aethelred, who he likely would have murdered to prevent their claims on the crown. In return, she swore that her children with Cnut would have precedence in the line of succession. A year later, she gave birth to a son, Harthacnut.

While their union appeared mutually agreeable, not everyone was satisfied with the marriage — least of all, the Church of England. During previous raids, Cnut had destroyed so many of their properties that the church bordered on outright hostility. Growing into an impressive politician, Queen Emma rapidly found solutions.

Hoping to smooth things over, Emma of Normandy had the churches reconstructed and gifted its leaders a vast amount of land and priceless gifts. She gave the Bishop of Winchester a golden cross and made one of her advisers the Archbishop of Canterbury. Most notably, she had her husband finance these endeavors.

While many in court initially doubted her talents, Queen Emma increasingly proved herself. She was often left to rule England by herself as Cnut was frequently off to oversee his new empire. In 1035, however, her diplomatic talents took a backseat — as Cnut died and many vyed for the English throne yet again.

Since Cnut’s son from his first marriage Harold Harefoot was the only one in England at the time of his death, Harefoot was crowned regent. Cnut’s son by Emma, Harthacnut, was crowned King of Denmark — but began challenging Harefoot’s claim in 1036. This would lead to arrests, deaths, and instability.

The Legacy Of England’s Richest Woman

Following his official crowning in 1037, Harefoot had Alfred Aetheling arrested and brutally blinded. The younger son of Queen Emma and Aethelred II, Alfred died of his injuries. His brother Edward fled to Normandy, while Queen Emma escaped to Flanders — before she remarkably returned once more. 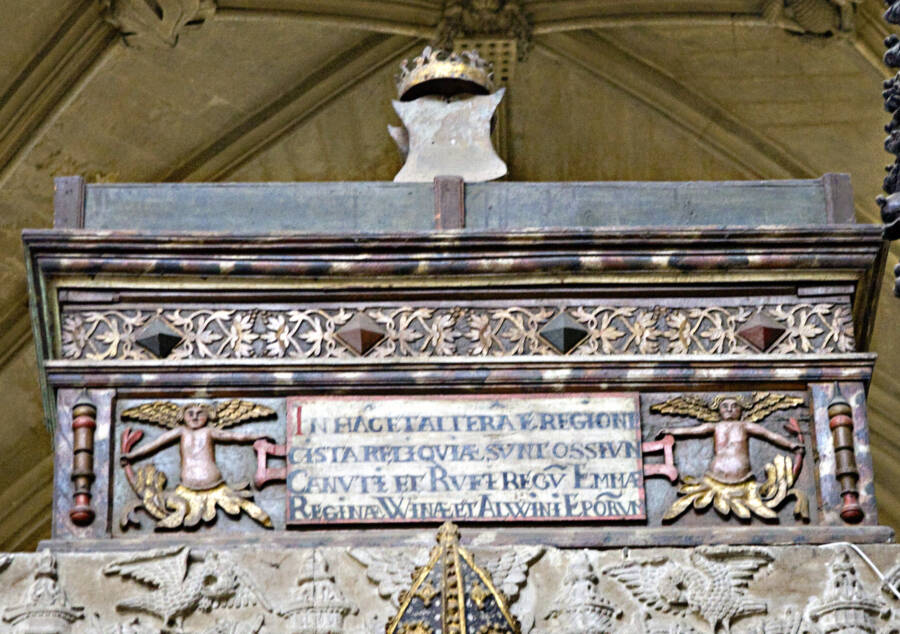 After rallying his people in 1040, Harthacnut launched an invasion that coincided with Harefoot’s death. Emma had spent her time in Flanders swaying the English nobility to his side and even commissioned a book, Encomium Emmae Reginae whose sole purpose was to praise her and her accomplishments while solidifying Harthacnut’s right to rule.

And it worked. Harthacnut became King of England that same year, and Emma became Queen Mother for the first time. And with Harthacnut’s blessing, she invited Edward, his half-brother, back to England and bestowed all of Essex to him.

Then, when Harthacnut died in 1042, she contrived to make Edward the King of England. He became known as Edward the Confessor, and thus, for two kings in a row by two different kings, Emma maintained her status as Queen Mother.

But the succession of Edward the Confessor jeopardized her standing entirely. Displeased with his mother for previously supporting Harthacnut’s claim on the throne over his, Edward stripped her of her role in the treasury and forced her out of the castle. He even married Edith Godwinson, who was the daughter of Godwin — the Earl of Wessex who had killed her Arthur Aetheling.

One legend holds that she may also have lost favor with Edward after the Archbishop of Canterbury accused her of having an affair with the Bishop of Winchester. To prove her innocence, she was made to undergo trial by fire and walk across nine red-hot plowshares — an incident known as the Ordeal of Queen Emma. And when she emerged unscathed, Edward was said to break down crying at her innocence and readmitted her to court.

In the end, however, Emma of Normandy lived the rest of her life in obscurity, spending most of it in Winchester. Dying on March 6, 1052, she had been the Viking queen of England, Denmark, and Norway, queen consort to two English kings, and the mother of another two.

Ultimately, their precarious house of cards would crumble rather rapidly, but her House of Normandy would triumph. Edward was succeeded by Edith’s brother Harold Godwinson in 1066. But by the end of the year, he would be dead, too, killed by William the Conqueror during the Norman invasion of England.

William the Conqueror was Emma of Normandy’s great-nephew.

After learning about Emma Of Normandy, read about the tragic life of Mary, Queen of Scots. Then, learn about the history of the medieval toilet.