Meet Aethelred The Unready, The Hapless Medieval King Who Lost England To The Vikings

King Aethelred II of England was crowned when he was just 10 years old, and his reign was marked by a series of blunders so bad that he was usurped by the King of Denmark in 1013. 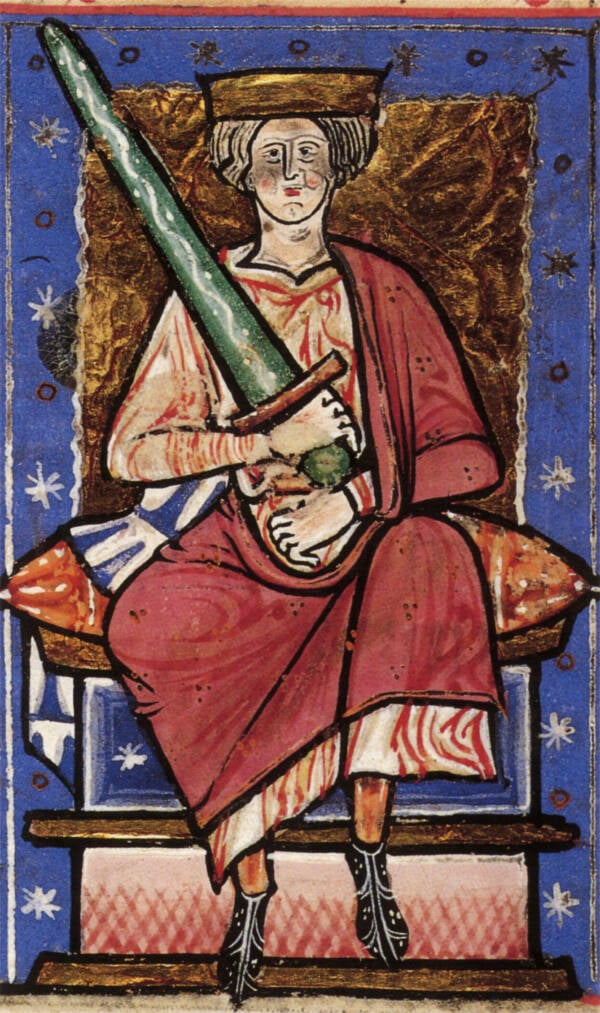 Public DomainAn image of Aethelred the Unready from the 13th-century Chronicle of Abingdon.

In 1013, King Aethelred II of England lost his throne to the King of Denmark, Sweyn Forkbeard. He’d been crowned king 35 years earlier and the age of 10. And throughout his reign he was frequently ill-suited to the task of defending his kingdom, leading future chronocalers to dub him Aethelred the Unready.

As it happens, “Unready” is a clumsy translation of the Old English word “unraed.” And although Aethelred was undeniably unprepared to become king before he hit puberty, the word is better understood as “uncounseled” or “ill-advised” — a pun on his name, which means “noble counsel.”

And indeed, Aethelred was a high-born man who constantly turned to the worst clerics, generals, and noblemen to guide him. And their bad advice and poor decisions of their own led him to make a series of blunders so disastrous that he effectively lost England to the Vikings when his earldormen sided with them.

Yet somehow Aethelred the Unready became the longest-ruling English monarch of the Anglo-Saxon era, wearing the crown for 38 years (minus the five weeks when he was forced out by Forkbeard) — a longevity that would not be surpassed until the 13th century by Henry III.

How Aethelred The Unready Became King Of England 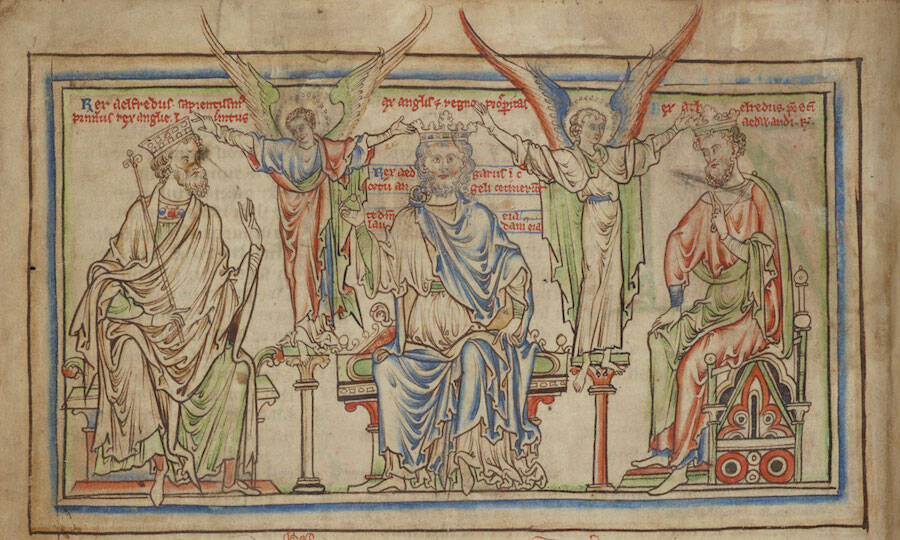 Cambridge University LibraryAn illustration of kings Alfred, Edgar, and Aethelred II (left to right) from The Life of St. Edward the Confessor, produced during the 13th century.

Aethelred the Unready (whose name has also been spelled Ethelred, Æthelred, and in the original Old English, Æþelræd) was born the youngest son of King Edgar and his wife, Aelfthryth, around 968 C.E. But his older brother, Edward, was rumored to have been born illegitimately, so when Edgar died in 975, a dispute arose over who should be king.

Eventually, the nobles who supported Edward, who was just 13, won out with a sort of compromise. Aethelred and Aelfthryth would be given lands normally reserved for the king’s son, and Edward would be coronated.

But Aelfthryth and the earls who supported Aethelred’s claim to the throne weren’t satisfied with the arrangement. And less than three years later, Edward was killed while he was visiting his brother at his estate. Rumors swirled that Aelfthryth had orchestrated it.

Nobody seems to have blamed Aethelred, now 10 years old, for the murder, even though it was done in his house by his advisors and the body was buried unceremoniously in his yard. Still, a few noble eyebrows did arch when Aethelred was crowned king shortly after the gruesome homicide, and Edward became known as Edward the Martyr.

Making things worse, England under the adolescent king was going through an awkward phase of its own. Fractious nobles spent most of their time shoving each other around and building fortified houses to stage raids out of.

Meanwhile, after a period of relative calm and safety during the reign of Edgar the Peaceful, Danish Vikings were once again attacking from the sea.

The Catastrophic Loss Of The Battle Of Maldon 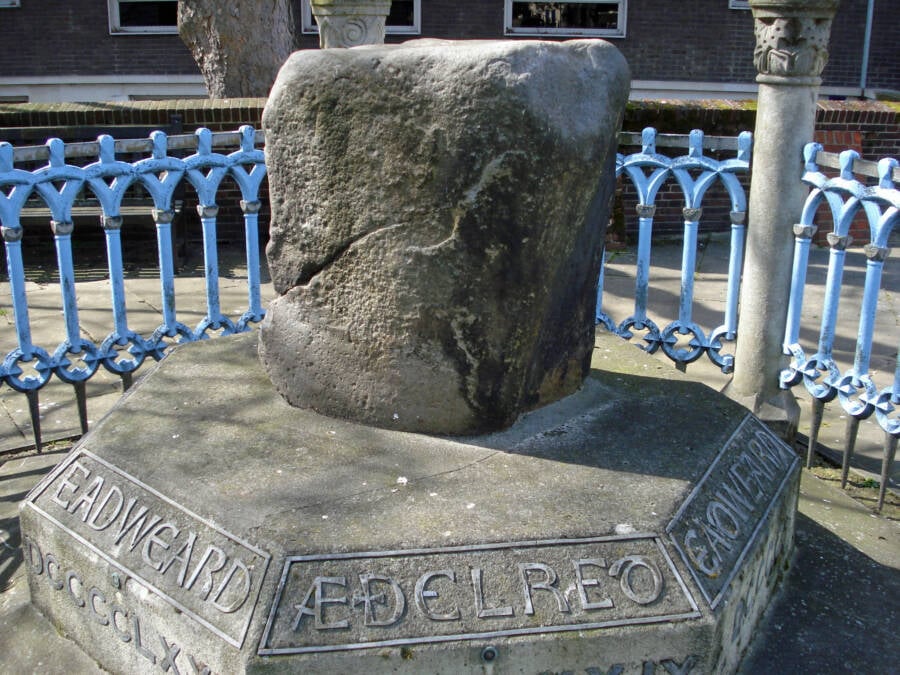 Diamond Geezer/FlickrThe Coronation Stone in Kingston-upon-Thames. According to legend, seven Saxon kings were crowned upon this stone, the last being Aethelred in 976, when he was only 10 years old.

To his credit, Aethelred the Unready really tried to get a grip on things. Realizing that the kingdom must put up a united front to have any chance at all against the Danes, the king first tried to make peace between the various lords of his realm.

One especially valuable alliance was with Byrhtnoth, the Earldorman of Essex, who commanded a sizeable army of retainers, and whose land was a special target for Danish attacks. At the time, there were conflicting views over whether to fight the Danes or try to pay them off. And Aethelred, more a scholar than a soldier, wanted to pay.

But Byrhtnoth wanted to fight, and because he had previously supported Edward’s claim to the throne, Aethelred knew he needed him on his side. So he let him fight. It was a huge mistake that would echo for decades.

In August 991 C.E., Danish Vikings made an error: they landed on a small island two miles south of Maldon in southeast England. It was connected to the mainland by such a narrow causeway that could be held off by only three men standing abreast.

In fact, the whole causeway was submerged at high tide, so Byrhtnoth knew the time and the place of the fight, and he showed up with virtually his whole force on August 11. 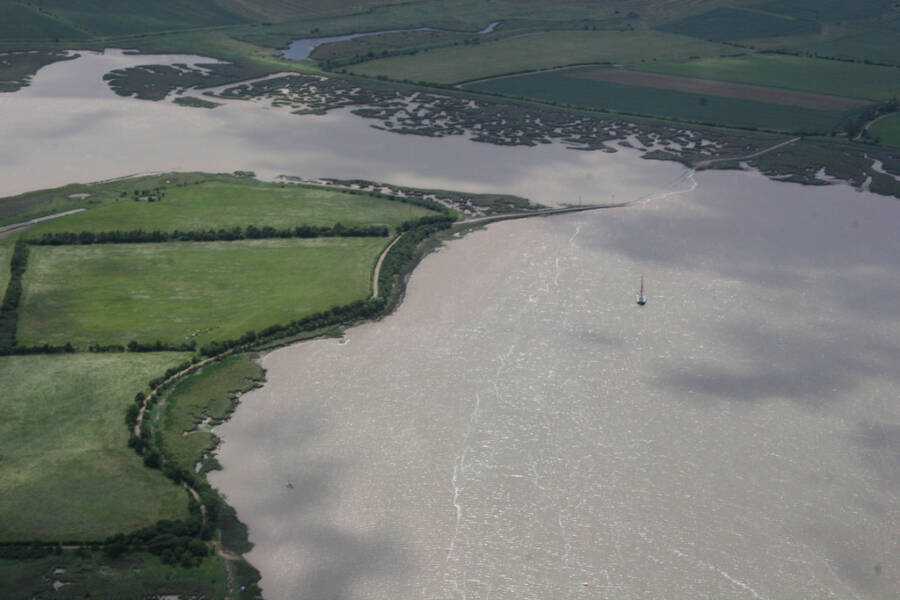 Terry Joyce/GeographThe site of the disastrous Battle of Maldon, with the causeway separating Northey Island (left) with the mainland shore (top).

At first, things went swimmingly for the English at the Battle of Maldon. The Danes didn’t have a hope in hell of forcing the causeway, and they had to quit the field altogether when the tide rolled in.

Realizing their awful position, the Danish raiders shouted across the water that it would be more honorable to fight on open land. Byrhtnoth, showing shocking gullibility, pride, recklessness, or a combination of all three, agreed to let the Danes pass unhindered to fight on the nearby plain.

The Danes rewarded such honor by slaughtering the whole force and cutting off Byrhtnoth’s head, although they were good enough to leave his gold-hilted sword with his body.

After the disastrous loss, Aethelred decided it might be a good idea to start paying tribute, or “Danegeld,” to the raiders who were cutting through his kingdom. And with the help of the pope, England and Denmark even signed a treaty in 994.

But soon, the Danes started attacking again because, treaty or no treaty, there was still a lot to steal in England.

Aethelred’s Attempts To Pay Off The Vikings 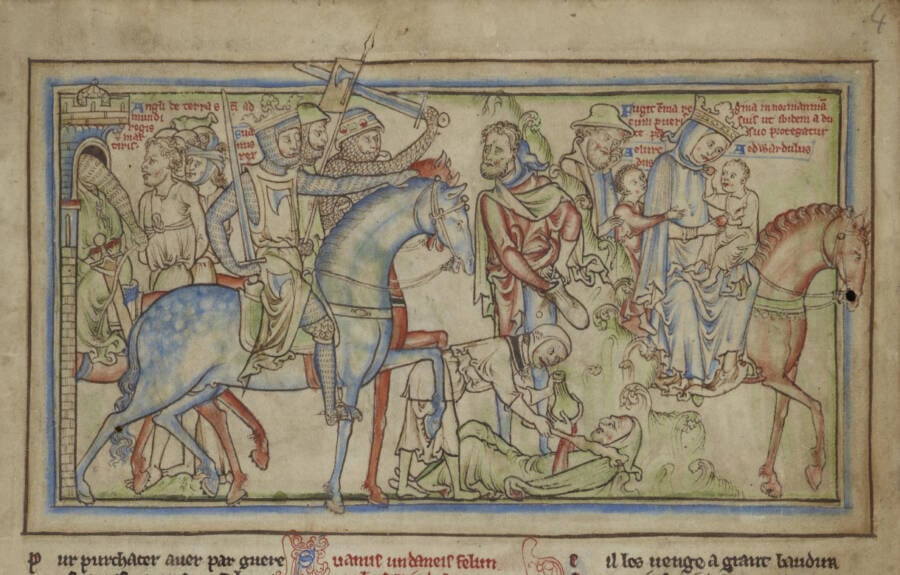 The 10 years following the battle of Maldon were very bad for the English. Aethelred the Unready agreed to pay a ransom of 10,000 pounds to keep the Danes off his back. Then, when the Danes took the money and went right back to raiding, Aethelred paid more.

In 1000, the coast was heavily raided by a nice combination of Viking pirates and Danish soldiers, after which Aethelred agreed to a tribute of 24,000 pounds. In 1001, the raids started up again.

The following year, Aethelred sought a diplomatic solution. He would marry Emma of Normandy, the daughter of Richard, Duke of Normandy who was descended from Danish settlers in France. Richard had been allowing Vikings to use Norman ports as a base of attack, and Aethelred thought if he could forge an alliance, Richard would help him stop the raids.

But neither man got the chance to see the strategy through, because Aethelred did possibly the stupidest thing he could have done — he ordered the slaughter of all male Danish settlers in England.

On the morning of November 13, 1002, Aethelred’s men fanned out to kill Danes across about one-third of England. It was only about one-third, because by this point the Danes had already taken effective control of the other two-thirds of the kingdom.

Known as the St. Brice’s Day Massacre, the killing sent shockwaves through the country and abroad. Not only had Danish settlers been relatively peaceful for decades, many had converted to Christianity. But, even worse for Aethelred, was the fact that a woman named Gunhilde was killed. She was the sister of the Danish King Sweyn Forkbeard, who invaded England in 1003 looking for revenge.

The war that followed was brutal and bloody. Forkbeard himself left in 1004, but the killing continued, and after around five years of genocide and famine, Aethelred managed to buy a little peace for 36,000 pounds in 1007.

In 1009, the war started up again under Thorkell the Tall, who was bought off in 1012 for 48,000 pounds. In 1013, Sweyn Forkbeard rebuilt his army, and returned, this time declaring himself king. By the end of the year, Aethelred was living in exile in Normandy.

How Aethelred The Unready Lost His Kingdom To The Danes 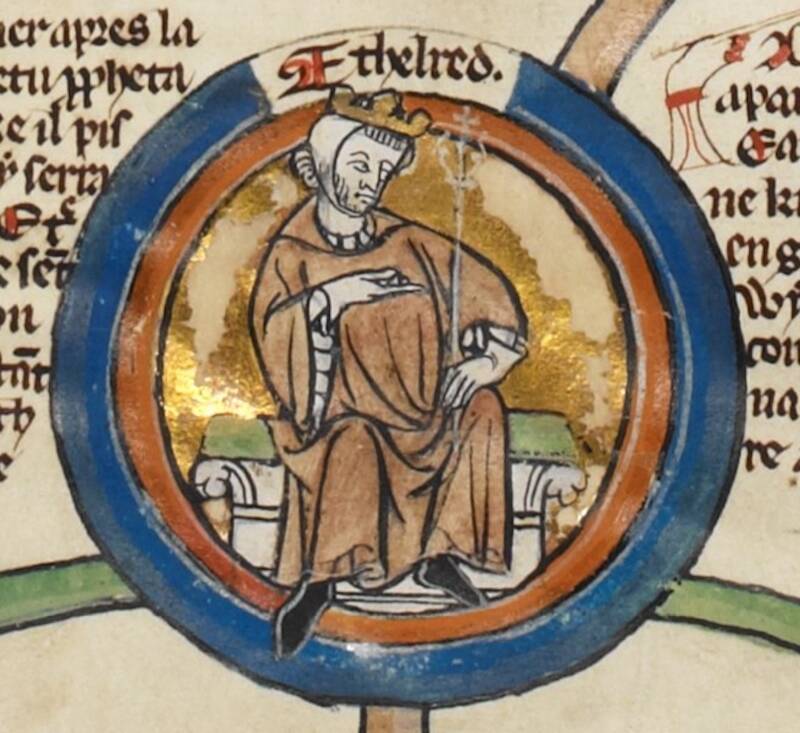 British LibraryAn Illustration of Aethelred the Unready from the 14th-century genealogical roll of the Kings of England.

By this point, just about everybody was fed up with the chaos and war, including the Danes and Aethelred’s own nobles. Many of the people had willingly sworn fealty to Cnut, because Aethelred didn’t command a great deal of loyalty by this point. But the nobles, skeptical of Cnut, sent a delegation to Normandy to let Aethelred know they wanted him back.

But the request had conditions. Aethelred had to reform all the things the nobles hated about his reign, agree to forgive everything that had been done against them, and even declare his loyalty to them, rather than the other way around. Incredibly, the agreement has gone down in history as the first known contract between a sovereign and his subjects.

On February 3, 1014, Aethelred was back as the King of England. He liberated London, threw the Viking army out of England, and sent Cnut back to Denmark. But the peace would not last. In 1016, Cnut returned and swiftly conquered most of the country.

By the time King Aethelred II died on April 23, 1016, his kingdom had been reduced to barely more than the city of London. Vikings controlled the rest. Soon, Cnut became king and established the North Sea Empire, ruling over England, Denmark, and Norway.

Aethelred the Unready was buried in St. Paul’s Cathedral, which burned to the ground in the Great Fire of 1666.

After reading about how King Aethelred II lost England to the Vikings, learn more about how his wife, Emma of Normandy, became the richest woman in England after his death. Then, learn why the Vikings are one of history’s most misunderstood civilizations.