Andy Carter spent the last 20 years scanning British soil for treasure. And on a cloudy October day in 2019, he quite literally struck gold — and found one of only five leopard coins known to exist. 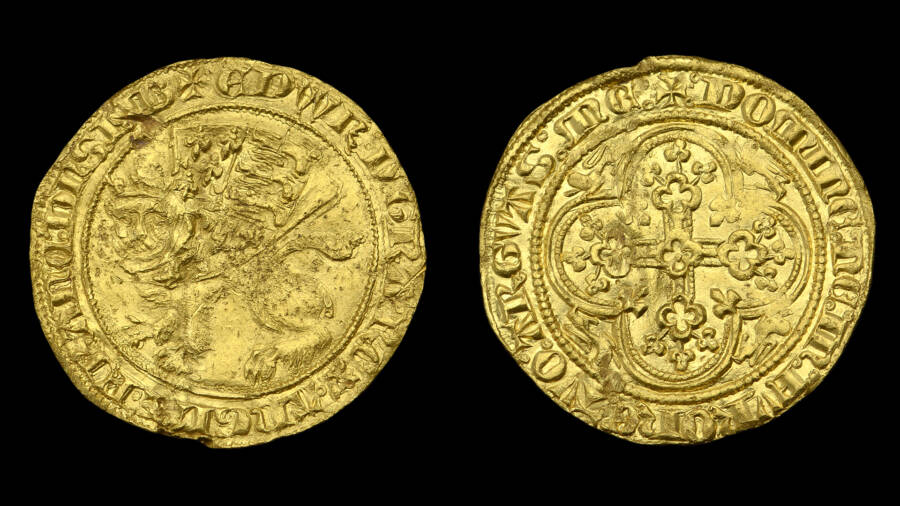 Dix Noonan WebbThis leopard coin from 1344 A.D. was worth three shillings at the time.

According to The Guardian, the retired research scientist discovered the gold artifact on a farmer’s field near Reepham in October 2019. He’d combed the grounds for hours with 30 detectorist peers, almost all of whom had already left when he found it.

According to LiveScience, it was minted in 1344, during the reign of King Edward III. With France and Italy producing their own for decades prior, he had been eager to stop relying on silver. Their high minting cost ultimately did away with leopard coins, however — rendering this one a hot item at next week’s auction.

“It is in very fine condition and retains light surface marks consistent with a field find,” said Nigel Mills of the Dix Noonan Webb auction house in London. “Only five are known to still exist and this is by far the finer of the two known specimens that have come to auction.” 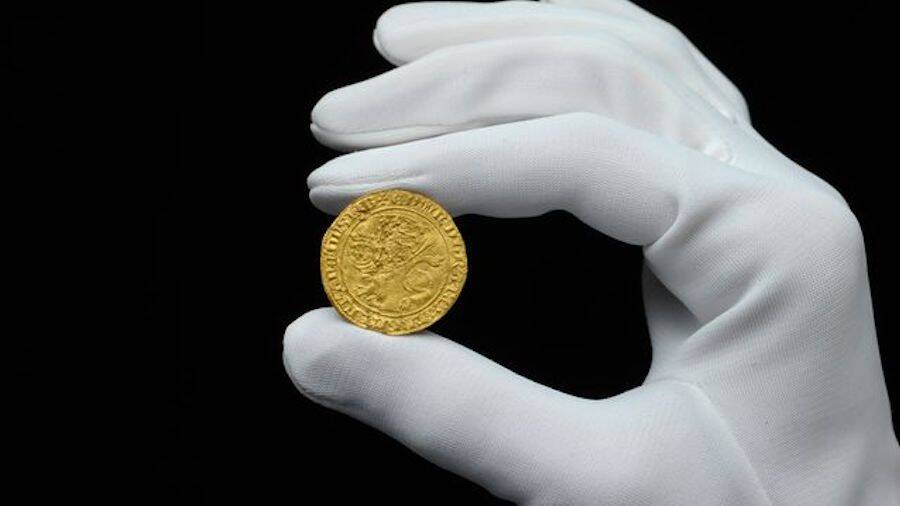 The auction house itself believes that Carter’s find and two unrelated others in recent months are evidence of a “golden age” of metal detecting. Dix Noonan Webb said more than 30,000 people are actively scanning British soil with metal detectors on a daily basis.

After formally retiring in 2018, the ex-scientist expanded his treasure-hunting hobby to five days per week. It was during a so-called rally one year later that he made the find of a lifetime. Carter says that he “just got lucky” when he came across the stunning find.

“There were only three of us still looking — everyone else was packing up,” he said. “The coin was covered in mud, about 10 inches down. When I brushed off the soil, I saw the hind leg of a big cat. I thought: ‘It can’t be a leopard — they’re as rare as hen’s teeth.’ I called one of the experts over and his eyes were on stalks.”

That visceral response was certainly warranted as only a handful of these leopard coins are currently known to exist. With two displayed at London’s British Museum, another at the Ashmolean Museum in Oxford, and the other privately owned, Carter’s find rapidly garnered attention — and is set to be auctioned on March 8.

“I just felt numb when I found it,” said Carter. “And then I did the gold dance.” 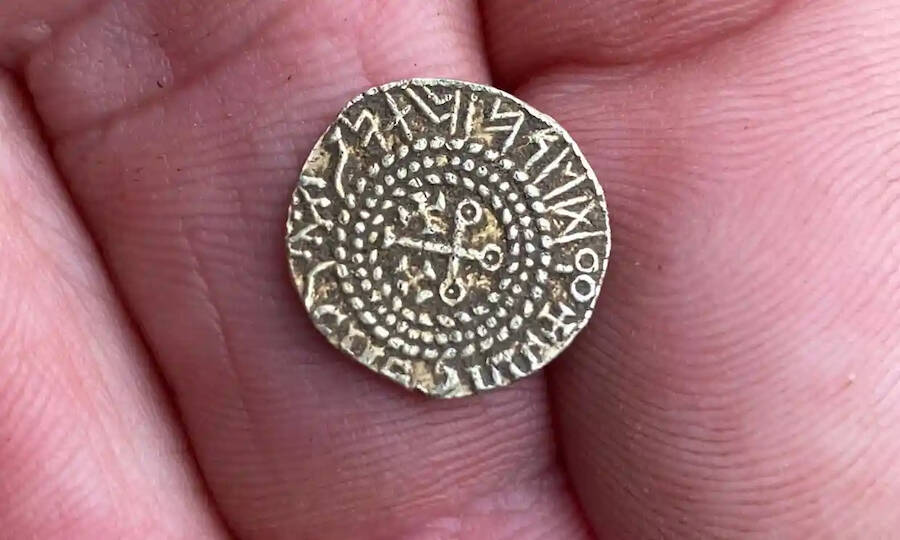 Minted in 23-carat gold at the Tower of London in January 1344, the gold florin was stamped with an upright leopard wrapped in a banner. It weighed 0.12 ounces and spanned about an inch in diameter. Worth three shillings or 36 silver pennies, the gold coin was spawned by international economics during the Middle Ages.

King Edward I spearheaded England’s efforts to introduce gold into British currency. The crowned leopard head from 1300 A.D. was the first gold coin to emerge and served as king’s authentication on silver and gold coins. The leopard would subsequently appear on flags and shields of British royals and supporters.

Ultimately, however, the overwhelming majority of Britons still relied on silver in their daily transactions. King Edward III would make a major push to change that between January and July 1344, and minted 32,000 British pounds’ worth of gold into three different types of leopard coins: leopard, double leopards, and helms.

According to Dix Noonan Webb, the king declared that one leopard was worth three shillings, a double leopard twice as much, and one helm equivalent to 18 pence. His hopes crumbled by August, however, as the price of minting them simply wasn’t worth the cost, their denominations were impractical, and leopards were overvalued compared to silver. 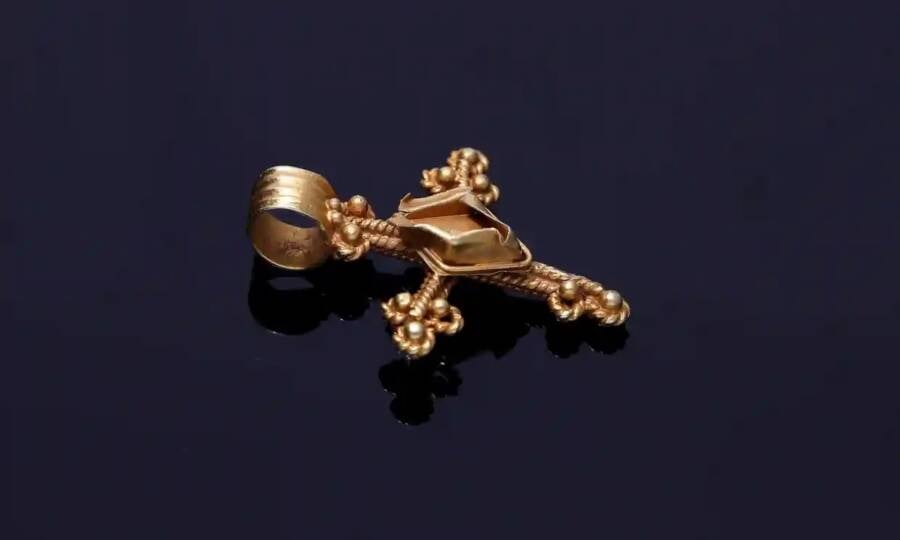 Carter wasn’t the only Englishman to have stumbled upon gold in recent months. A drainage engineer from Essex, 55-year-old Mark Pallett spent the last 40 years scanning the grounds before he found a Saxon gold schilling in Cambridgeshire in January, while Norfolk’s Jason Willis found a 12th-century gold cross.

Their finds ultimately paled in comparison to Carter’s, with the Saxon shilling estimated to be worth $13,200 and the cross $10,500. While Carter’s leopard coin was only worth three shillings in 1344 — around $2,670 today — its history has made it overwhelmingly popular with private collectors and museums.

Back then, of course, the world was unimaginably different: “It would have bought you a single sheep together with a gallon of wine, with a few pennies change,” said Nigel Mills of Dix Noonan Webb.

After reading about the 14th-century “leopard” coin headed to auction, learn about the treasure chest of stolen Nazi silver unearthed from a 14th-century castle in Poland. Then, read about the Templo Mayor skulls discovered in Mexico City.