"They were all made sacred. Turned into gifts for the gods or even personifications of deities themselves." 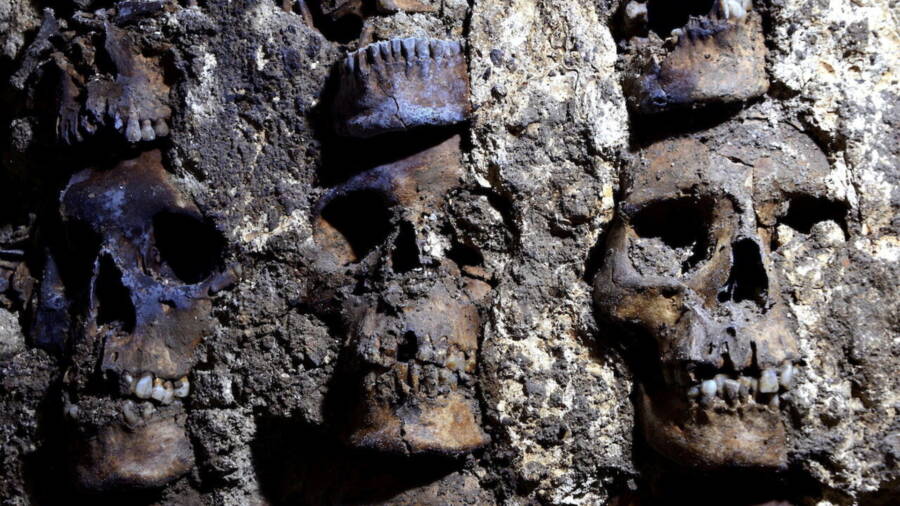 In 2017, researchers unearthed a macabre tower of human skulls after two years of digging beneath the Templo Mayor site in Mexico City. According to The Guardian, there was even more than initially met the eye, however — as researchers just discovered another section of 119 human skulls in March.

According to Fox News, the previous find yielded a tower of 484 skulls spanning over 16 feet in diameter. This latest find was made on the east side of Huey Tzompantli — the main trophy room of sacrificed men, women, and children. According to Phys, the macabre Aztec hoard now totals 603 human skulls.

Mexico’s National Institute of Anthropology and History (INAH) discovered this facade of the tower months ago, but only publicized the find on Friday. The cylindrical structure in question sits near the cathedral built over Templo Mayor, one of the main temples of the former Aztec capital. Naturally, the experts are stunned.

“The Templo Mayor continues to surprise us, and the Huey Tzompantli is without doubt one of the most impressive archaeological finds of recent years in our country,” said Mexican culture minister Alejandra Frausto. 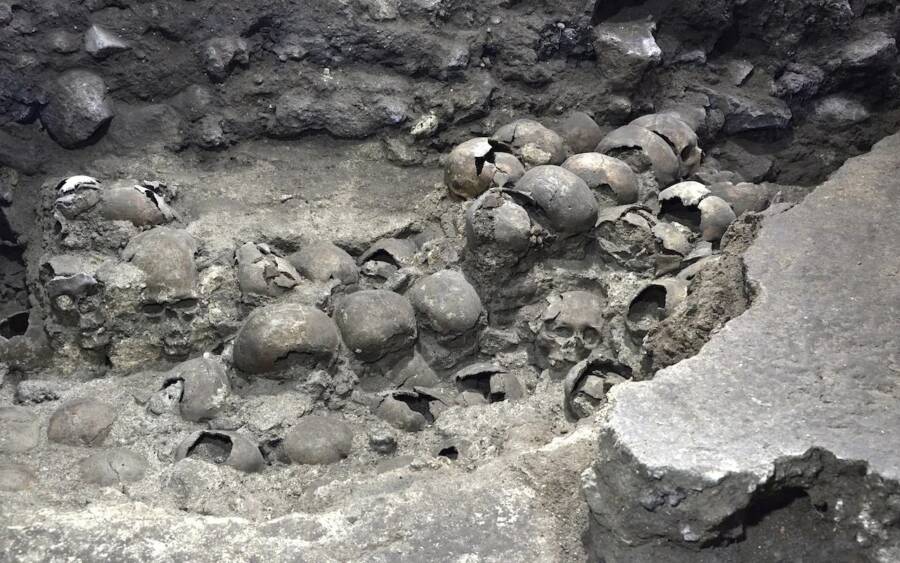 While the discovery of more than a hundred human skulls dating back to the 1400s is in itself a remarkable feat, it’s all the more extraordinary for being part of Huey Tzompantli. The enormous tower of skulls famously terrified the conquistadors who conquered the city under Hernán Cortés in 1521.

The diligent INAH researchers have since come to identify three distinct construction phases of the tower, which was built from around 1486 to 1502. The structure’s original discovery in 2017 was a rather shocking find, not merely because of the human remains — but because they weren’t exclusively male.

Experts had initially anticipated that the uncovered skulls had belonged to young male warriors, but found that many of the remains were of women and children. This naturally led to a reevaluation of what historians thought they knew about human sacrifice in the Aztec Empire.

“We were expecting just men, obviously young men, as warriors would be, and the thing about the women and children is that you’d think they wouldn’t be going to war,” anthropologist Rodrigo Bolanos told Reuters in 2017. “Something is happening that we have no record of, and this is really new, a first in the Huey Tzompantli.” 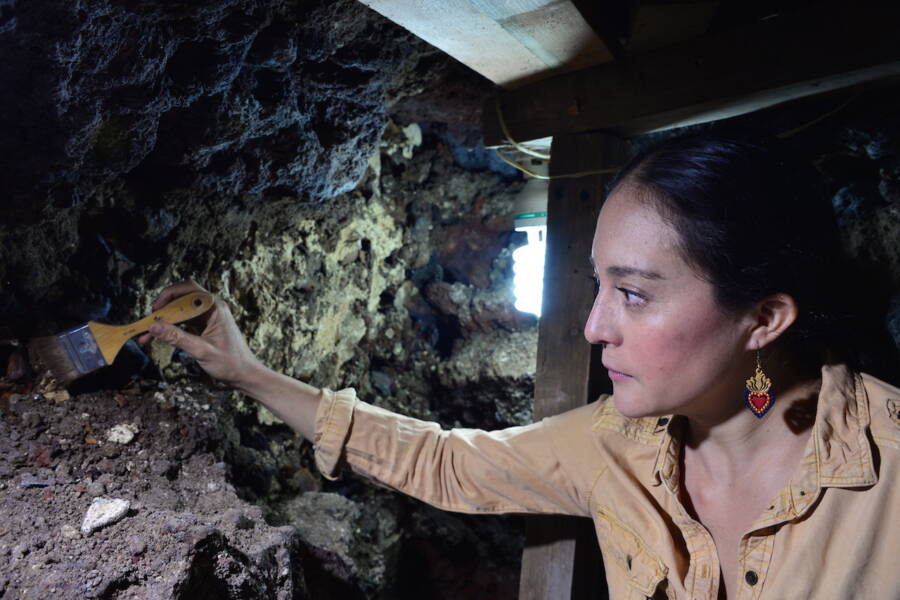 National Institute of Anthropology and History (INAH)An archaeologist carefully clears debris off the newfound tzompantli, or Aztec rack of skulls.

“Although we can’t say how many of these individuals were warriors, perhaps some were captives destined for sacrificial ceremonies,” said archaeologist Raúl Barrera. “We do know that they were all made sacred. Turned into gifts for the gods or even personifications of deities themselves.”

Frausto explained that the colossal pile of skulls, which was unearthed at about 10.5 feet below street level, had been a point of pride for the Aztec residents of Tenochtitlan. It represented not only strength and power, but a certain level of prestige that was likely unmatched by outside civilizations.

“It is an important testament to the power and greatness achieved by Mexico-Tenochtitlan,” she said.

Perhaps the most gruesome detail is that these racks of Aztec skulls (or tzompantli) not only displayed the decapitated heads — but they also had wooden poles shoved through the sides. There are countless paintings and descriptions from the early colonial period that detail the process, but seeing them first-hand is glaring.

Furthermore, the continuing dig at Templo Mayor differs significantly from many of these recorded accounts. Part of the platform containing these skulls saw many of them mortared together. On top of that, they’re positioned around an empty space in the middle and arranged to look inward — for reasons unknown. 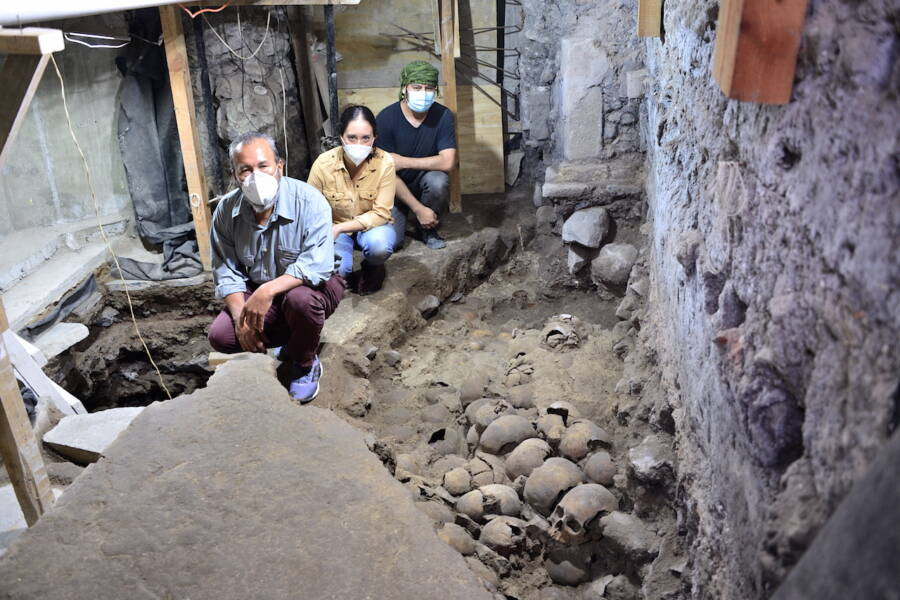 National Institute of Anthropology and History (INAH)The dig began in 2015 during the restoration of a building in Mexico City. With new discoveries five years in, there’s no telling how much more there is to find.

As it stands, researchers are positing various theories regarding the process. The skulls might have been put on display shortly after sacrifices took place, and were mortared together only once all the flesh had rotted off. Why, of course, is in large part still a mystery — while the goal of sacrifice seems rather clear.

According to the BBC, it was believed that the man who reigned over this area was the Aztec god of the sun, war, and human sacrifice. Huey Tzompantli itself was positioned on the corner of the chapel of Huitzilopochtli, who served as the patron of the Aztec capital Tenochtitlan.

Ultimately, Tenochtitlan was captured in 1521 when Cortés and his men arrived to take control of the city. While it’s unclear whether the Aztecs knew this or not, a historically inevitable point in time had come where the empire fell — like every single empire before it.

Next, learn about archaeologists unearthing the largest mass child sacrifice site in the world. Then, take a look at the Skull Tower of Niš in 15 chilling images.