The Harrowing Story Of The Whaleship ‘Essex’ That Inspired ‘Moby Dick’

After the whaleship "Essex" was sunk by a vengeful sperm whale, its crew was left on the high seas for 90 days — causing them to resort to cannibalism.

Camden Public LibraryThe Essex, the ship Moby-Dick is based on, was sunk by a vengeful whale.

In 1820, a whale rammed into an American whale-hunting ship in the South Pacific. It was the first time in American history that a whaling ship was assaulted by its prey in what seemed like a calculated attack. As the boat sank, the crew had a harrowing decision to make: to either head for the nearest dry land or try to cross the Pacific in rowboats.

What followed for the crew of the Essex was a terrifying ordeal of survival — and one that later inspired Herman Melville to write his classic seafaring tale, Moby Dick.

The Whaleship Essex Sets Sail On Its Final Voyage 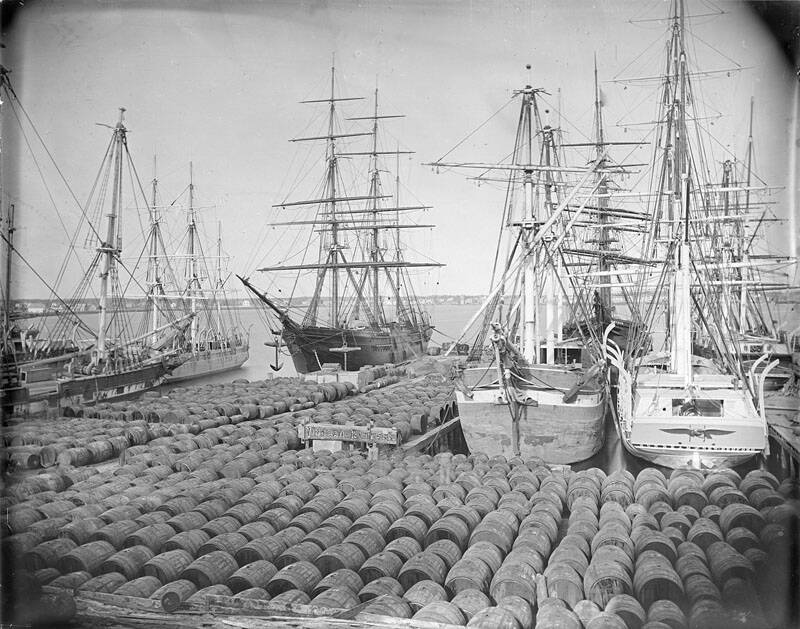 As America marched through the Industrial Revolution of the 19th century, whale products became invaluable commodities. Whale blubber was used to make candles and oil, which heated lamps and lubricated machinery. Whale bone was also harvested for the ribs in women’s corsets, umbrellas, and petticoats. As such, whaling was a booming American industry, especially in New England.

Before her final voyage, the Essex had a reputation for being lucky. It was an old whaler that had a history of profitable expeditions, which made 29-year-old Captain George Pollard Jr. — one of the youngest whaleship captains ever — confident that his excursion would be no different. And so on Aug. 12, 1819, he and his crew set sail from Nantucket, Massachusetts.

However, the Essex seemed doomed from the start. Just two days later, a squall nearly sank the ship in the Gulf Stream. Even though the storm damaged two of the five smaller boats they would use to hunt whales, Pollard pushed on until his crew reached the Galapagos. 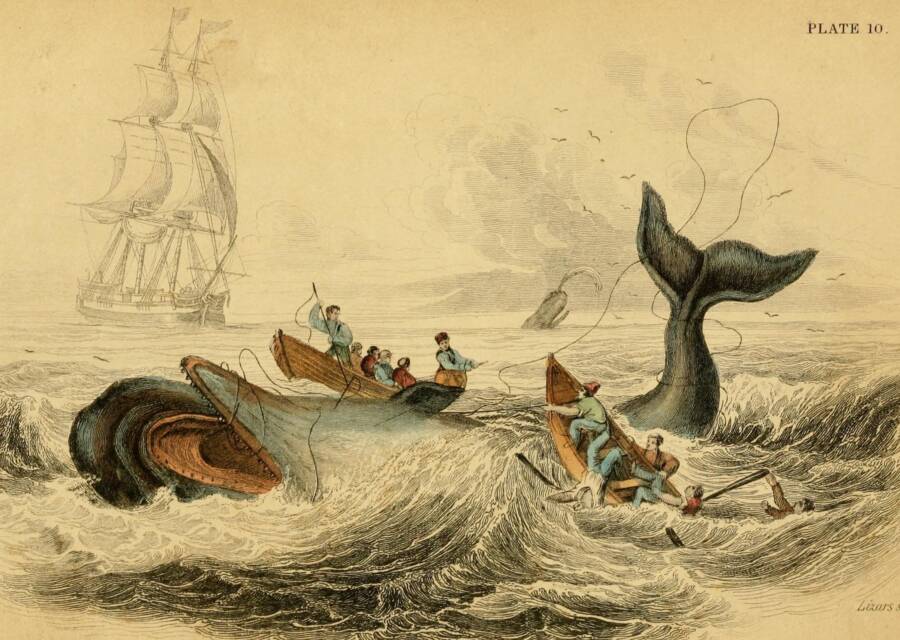 Biodiversity Heritage LibraryWhaling was a treacherous trade, as sperm whales could weigh up to 130,000 pounds.

But when they arrived at Charles Island in the Galapagos, a prank gone awry nearly cost Pollard the expedition. One of the sailors had lit a fire on land that quickly got out of hand, and as the men ran through the flames to survive, they nearly lit the entire island on fire.

But the biggest threat to the Essex’s voyage was yet to come. A year into the journey, the Essex and her crew came face to face with a massive sperm whale in the empty oceans of the South Pacific.

Whaling was no easy venture. Whalers would set off from the main ship in teams aboard smaller boats, from which they would try to harpoon a whale and stab it to death with a lance. At least the crew aboard the Essex were on the main ship when the sperm whale attacked them.

Owen Chase, the first mate on the Essex, first saw the whale. At 85 feet long, it was abnormally large even for a male sperm whale — which made it that much more frightening when it pointed itself directly at the ship. The whale was reportedly covered in scars and had been floating not far from the ship for some time, watching.

But after shooting a few warning spouts of water into the air, the whale barreled toward the vessel.

“I turned around and saw him about one hundred rods [550 yards] directly ahead of us, coming down with twice his ordinary speed of around 24 knots (44 km/h), and it appeared with tenfold fury and vengeance in his aspect.” Owen later recalled in his published narrative of the experience, The Wreck of the Whaleship Essex.

“The surf flew in all directions about him with the continual violent thrashing of his tail. His head about half out of the water, and in that way he came upon us, and again struck the ship.”

And the whale wasn’t done.

“I could distinctly see him smite his jaws together, as if distracted with rage and fury,” Chase continued. 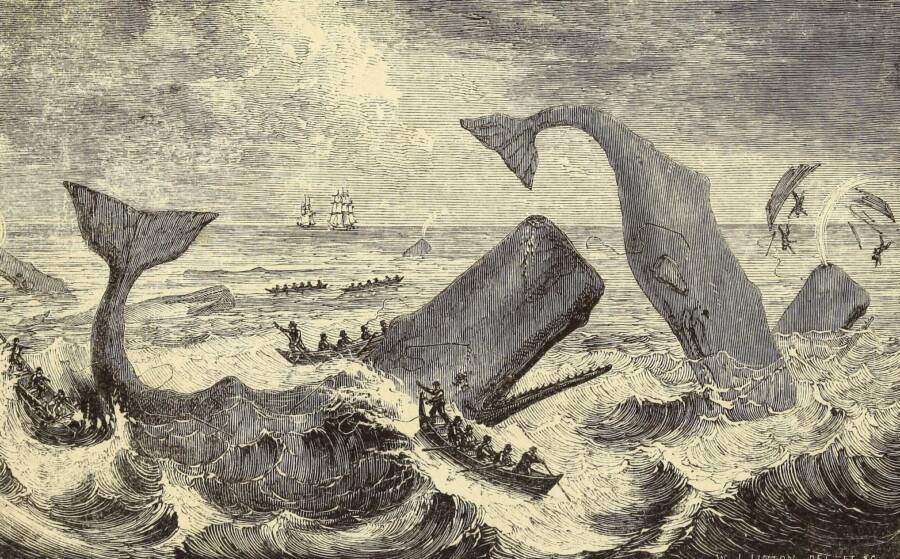 Finally, the whale retreated, and the crew scrambled to patch the hole the beast had punched in its ship. But according to Chase’s account, the attack wasn’t over. “Here he is — he is making for us again,” screamed a voice. Chase saw the whale, once again swimming toward the ship. After smashing into the bow, the creature swam off and disappeared.

To this day, no one knows why the whale attacked the ship. However, author Nathaniel Philbrick suggested in his book, In the Heart of the Sea, that the whale’s aggression likely wasn’t accidental. He speculated that the underwater frequency of the crew nailing a replacement board on the ship piqued the creature’s curiosity.

After the attack, the Essex ship began to take on water. The men shoveled supplies into their rowboats and quickly abandoned the whaleship.

The Desperate Crew Resorts To Cannibalism 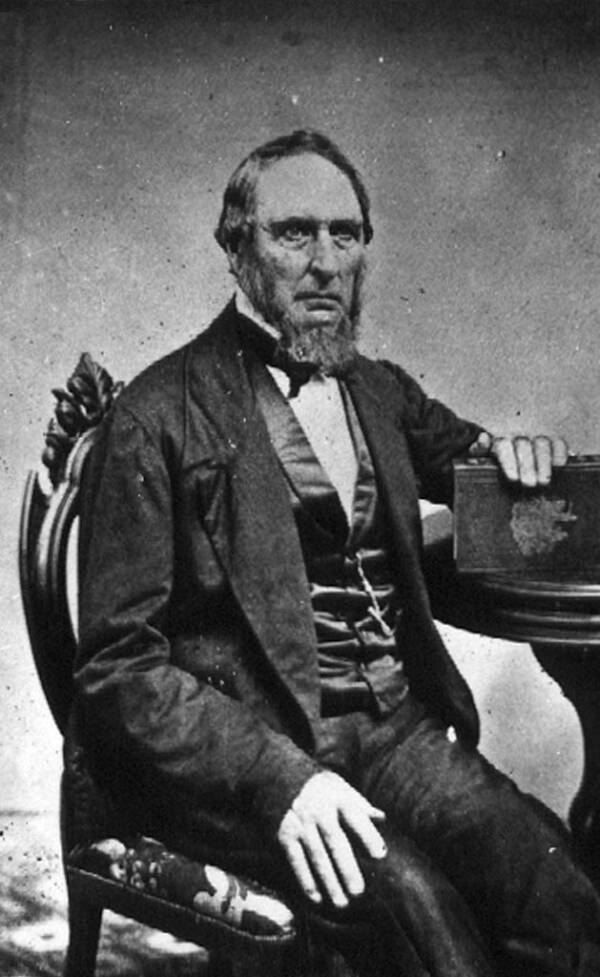 Pollard’s crew of 20 spread across three boats. And now, they faced a terrible choice. The captain suggested they sail to the closest land, which was the Marquesas Islands more than 1,000 miles away. But the crew refused, claiming the islands were filled with cannibals.

“We feared,” Pollard later recalled, “that we should be devoured by cannibals if we cast ourselves on their mercy.”

Instead, the men headed to Peru on the other side of the Pacific. They spent the next 92 days searching for rescue.

Within two weeks, the crew had barely any rations left and yet another whale had attacked the captain’s boat.

When they reached the uninhabited island of Henderson, Captain Pollard wrote an account of the shipwreck, sealed it in a tin box, and nailed it to a tree. If they all died, at least someone would know what happened to the crew of the Essex. Pollard called his men back to the rowboats, but three men abandoned refused to leave the island, preferring their chances on land.

Seventeen men returned to their boats. Pollard recounted how whales circled their ships at night. Nearly two months into the ordeal, a crewman died aboard Chase’s ship. “Humanity must shudder,” Chase wrote of what happened next.

The men “separated limbs from his body, and cut all the flesh from the bones; after which, we opened the body, took out the heart, and then closed it again—sewed it up as decently as we could, and committed it to the sea.” Then, they ate him.

“We knew not then to whose lot it would fall next,” Chase wrote, “either to die or be shot and eaten like the poor wretch we had just dispatched.”

The Men Are Saved, 90 Days Later

It wasn’t long before the three boats lost each other. One vanished entirely, then Pollard lost sight of Chase’s boat. Nine weeks had passed on the open sea and one of the four men left alive on Pollard’s ship suggested drawing lots and eating the loser. 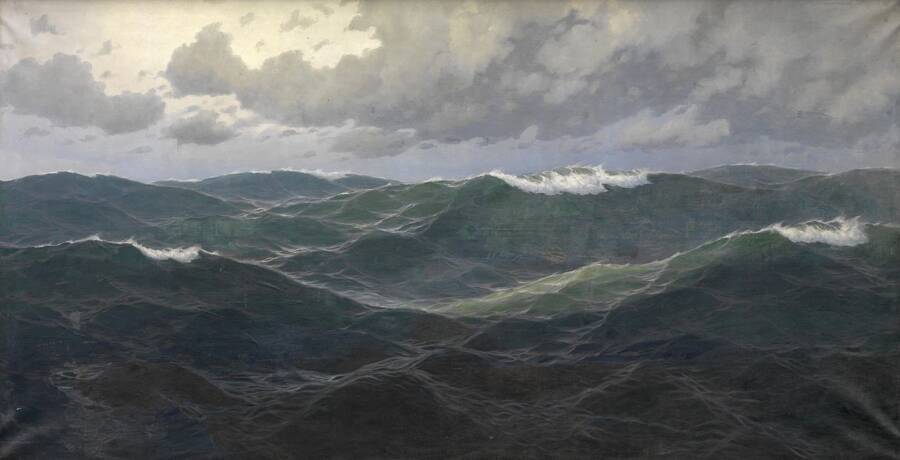 Max Jensen/Wikimedia CommonsChase and his men were finally saved by a British merchant ship called Indian.

“My lad, my lad!” Pollard cried, “if you don’t like your lot, I’ll shoot the first man that touches you.” Coffin refused to let Pollard take his place. “I like it as well as any other,” the young crewman said.

The men then drew lots to decide who would shoot Coffin. “He was soon dispatched,” Pollard later said, “and nothing of him left.”

After 94 days at sea, only Pollard and a single crewman survived on their boat. They were eventually picked up by a Nantucket ship and ferried home. Pollard reportedly stuffed his pockets with bones and sucked on the marrow as they sailed to safety. Chase and his boat were saved by a passing British merchant ship called Indian.

Of the entire crew of 20, eight lived: two on Pollard’s boat, three on Chase’s boat, and the three men on Henderson Island. When another captain heard Pollard’s story, he called it “the most distressing narrative that ever came to my knowledge.”

As tragic as it was, the story of the wreck of the Essex and its surviving crew inspired a young writer named Herman Melville. 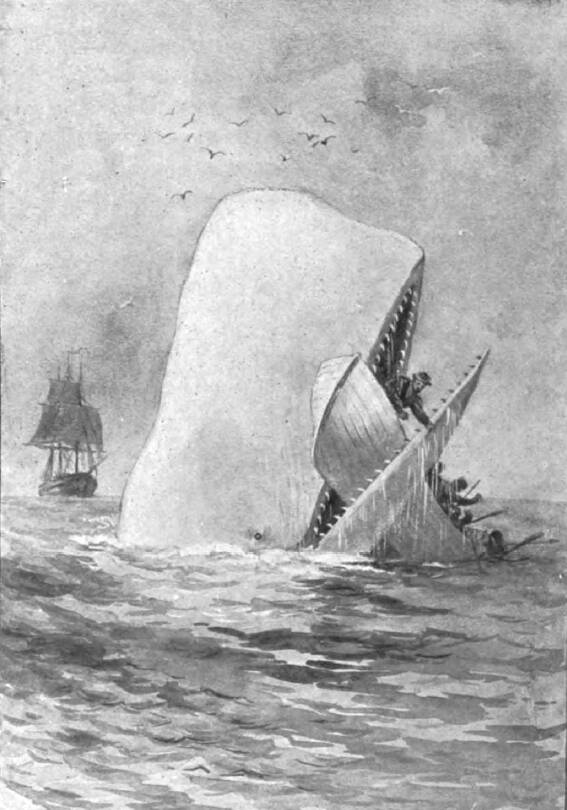 Augustus Burnham Shute/Wikimedia CommonsThe whaler of the ship from Moby-Dick was loosely based on Captain Pollard.

Back in Nantucket, Captain Pollard’s family rejected him – they couldn’t forgive their kinsman for eating his own cousin. He didn’t find any comfort out at sea either, as he was considered a “Jonah,” or an unlucky captain. So in his 30s, Pollard retired to Nantucket, where he reportedly locked himself in a room and fasted on the anniversary of the Essex ship sinking.

Owen Chase, meanwhile, published a book about his months at sea. The Narrative of the Most Extraordinary and Distressing Shipwreck of the Whale-Ship Essex told the story in all its grisly detail.

A young whaler named Herman Melville met Chase’s son, William Henry Chase, on a voyage to the Pacific. Young Chase offered the curious whaler a copy of his father’s book.

“The reading of this wondrous story upon the landless sea,” Melville recalled, “and so close to the very latitude of the shipwreck had a surprising effect on me.”

In 1852, Melville published Moby Dick, and that summer, he visited Nantucket for the first time. On the last day of his visit, Melville met Captain Pollard, now in his 60s. The two “exchanged some words,” Melville later recalled.

“To the islanders he was a nobody,” Melville wrote, “to me, the most impressive man, tho’ wholly unassuming, even humble — that I ever encountered.”

After this look at the whaleship ‘Essex,’ the ship ‘Moby-Dick’ is based upon, check out other shocking survival stories. Then, read about Ernest Shackleton’s terrifying journey on the Endurance.