The Remarkable Life Of Eugène-François Vidocq, The Ex-Con Who Invented Modern Detective Work

After escaping from prison several times in the early 19th century, Eugène-François Vidocq turned himself in — and went on to revolutionize policing. 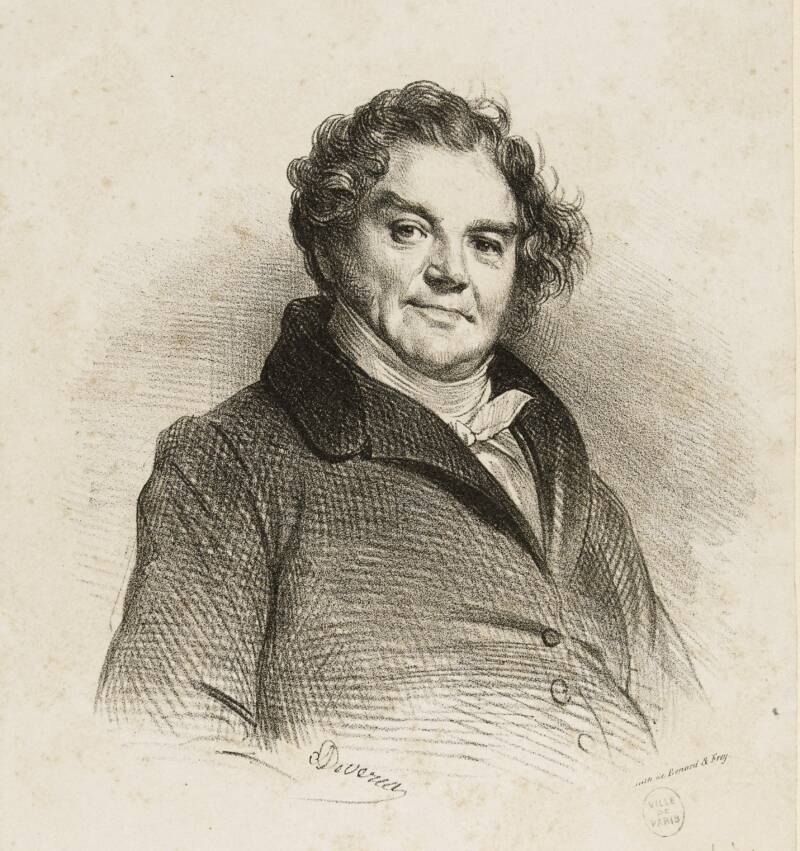 Born into a peasant family in France in the late 18th century, Eugène-François Vidocq was present at some of the most turbulent and storied moments in French history, and his criminal career during that time would have made for a taut thriller on its own.

But Vidocq was no ordinary thief. After a life of crime, he achieved the extraordinary twice over; first by founding the French national police, and then by serving as the inspiration for two of the main characters in Victor Hugo’s classic novel Les Misérables.

This is the story of Eugène-François Vidocq, France’s fascinating first detective.

The Criminal Life Of Eugène-François Vidocq 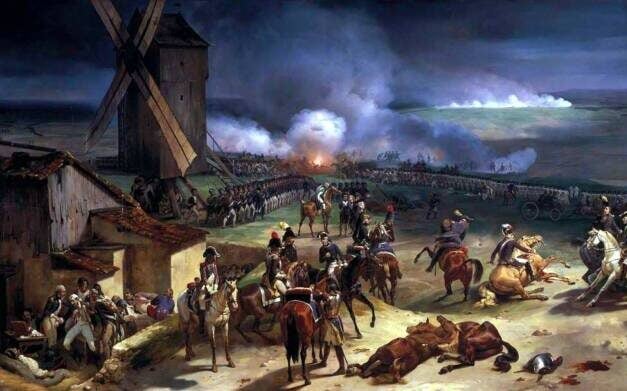 Wikimedia CommonsVidocq fought in the Battle of Valmy, pictured here, which was the first major battle that post-Revolution era France won against another nation.

Born to a couple of successful bakers on July 24, 1775, Vidocq displayed a taste for crime from a young age. His first victims were his hapless parents, whom he burgled on at least two separate occasions by stealing from the till in their profitable bakery and selling the family silver.

By the age of 14, he was already well known among criminals in the northern French city of Arras, and his taste for long nights of alcoholic debauchery and sex were fast becoming legendary, as well.

His raucousness endeared him to the soldiers of the local garrison, who taught him to fence and introduced him to military life. After working for a traveling circus for several months, Vidocq joined the army on March 10, 1791.

Vidocq showed promise as a fighter seeing as he was an expert swordsman, and he fought in the battles of Valmy and Jemappes, two early successes for France’s Revolutionary army against Europe’s monarchs, who sought to restore King Louis XVI to the French throne.

Vidocq’s fondness for dueling and frequent desertions ended his military career in 1793, and at age 19, he moved back to Arras to run a grocery. But the draw of a life of crime was too strong, and in 1795, he packed up and headed for the seething underworld of Paris. 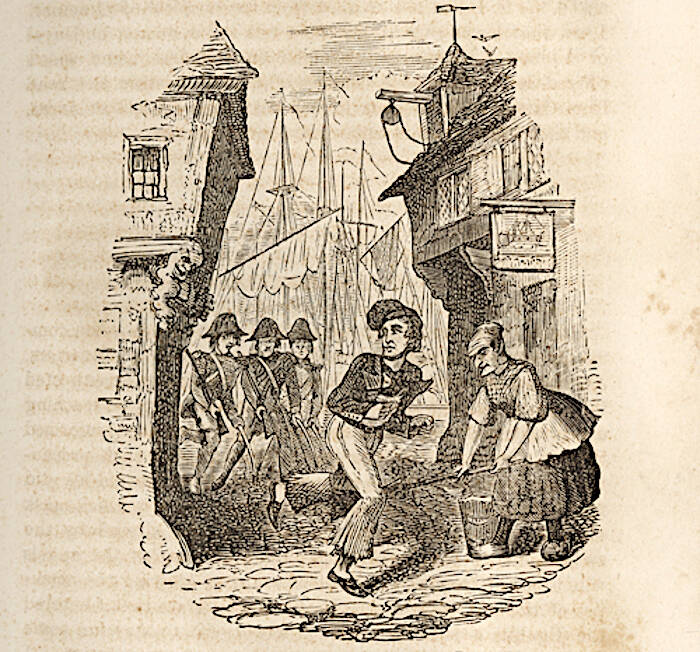 Wikimedia CommonsTime and again, Vidocq would be recognized following an escape, turning his life into an endless cycle of escape, pursuit, and recapture.

For a time, Vidocq drifted around France and modern Belgium, tripping from one misadventure to another. He first fell in with a Romany “doctor” who specialized in lightly poisoning cattle before offering to cure them for a fee.

Deciding that poisoning was a little too crooked for his liking, he traveled to the city of Lille, where he soon met and fell in love with Francine Longuet.

Vidocq at first believed that Longuet was devoted to him, “and at every moment made me protestations of fidelity, which did not, however, prevent her from giving private interviews to a captain of engineers.”

Catching the two in a hotel room, Vidocq beat them both, then persuaded them to withdraw the charges they later brought against him. He was sentenced to three months in jail anyway, the first in a long string of prison sentences.

Convictions For Violent Crimes And Forgery 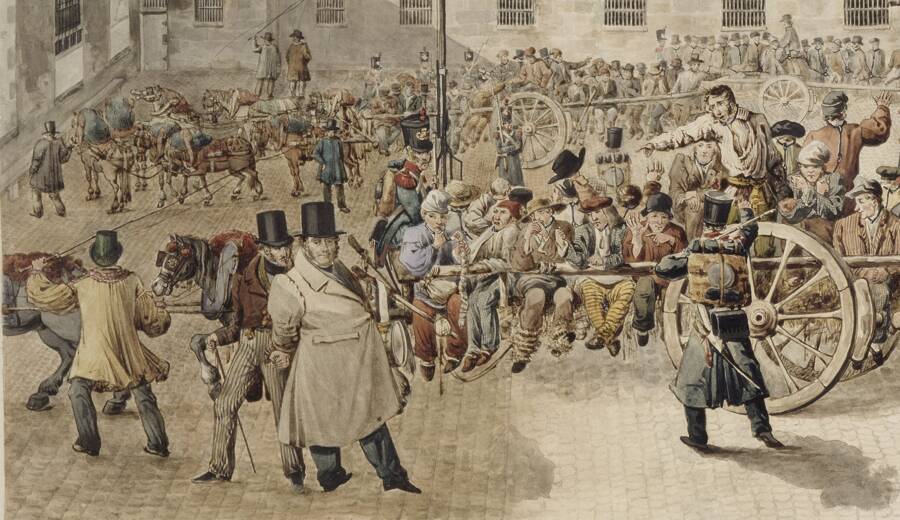 Wikimedia CommonsAfter his forgery conviction, Vidocq was chained at the neck to dozens of other convicts in a convoy like this one and marched more than 300 miles to Brest.

In prison, Vidocq was caught in a plot to forge release papers for a laborer sentenced to six years for stealing garden tools.

While awaiting trial, Vidocq began to sharpen his skills in the art of escape. With Longuet’s help, he successfully broke out several times, often using disguises to help him on his way, but was brought back each time.

Finally, he was convicted for the forgery charge, which netted him a sentence of eight years in the dreaded Bagne, or naval prison, at Brest. Here inmates were kept on ships in the harbor and used for local construction projects.

Eventually, he assumed the identity of a dead prisoner, was sent to a more lax prison in Brittany, faked an illness to get into the prison hospital, and hopped over the wall dressed in a stolen nun’s habit.

Following a series of odd jobs, Vidocq was pressed into service in the Dutch navy as a privateer. After leading a brief mutiny, his ship docked at Ostend, in modern Belgium. He was recognized by French officials in port, re-arrested, and imprisoned in Toulon.

Between 1800 and 1811, Vidocq’s life was a constant pattern of escapes, finding legitimate work during bouts of freedom, actively avoiding criminals, and recapture.

Desperate to break the cycle, he offered himself to the police as an informer and aided in the successful capture of several bandit gangs.

Eventually, his efforts paid off, and he was invited to join the Paris Prefecture of Police. From then on, he worked on the opposite side of the law.

How Eugène-François Vidocq Revolutionized The Police 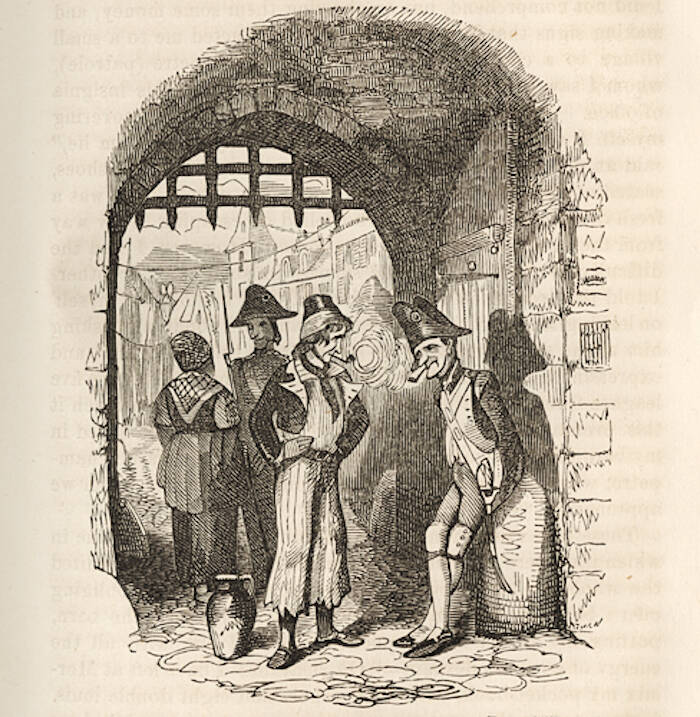 Wikimedia CommonsOne of Vidocq’s most valuable skills was his chameleonic ability to disguise himself, which aided him in many escapes, and later, in infiltrating criminal groups as a detective.

Vidocq’s talent for disguise and impersonation enabled him to stop numerous robbers and counterfeiters, and he was entrusted with more and more responsibility within the Paris police force.

To help him handle the workload, in 1812, the Ministry of Police established the Brigade de la Sûreté, or “Security Brigade,” and appointed him as its first chief.

It was the first plainclothes detective unit of its kind, made up entirely of former convicts who each were intimately familiar with the subtleties of Paris’ criminal underbelly.

At the same time, Vidocq made innovations in forensics, such as rudimentary crime scene investigation and extensive profiling of known criminals.

Impressed with the unit’s tenacity and inventiveness, French emperor Napoleon Bonaparte granted the Sûreté nationwide powers and renamed it the Sûreté Nationale in 1813.

The agency was madly successful. In 1823, Vidocq and several of his agents hid aboard a stagecoach which he’d learned through underworld contacts was a target for robbery. After a brief gunfight, the stagecoach was saved, and the glowing press coverage of the event made him a minor celebrity.

His success couldn’t save him from internal politics, however, and by the time Charles X was crowned king of France, more conservative policemen had had enough of the ex-convict detective.

On June 20, 1827, he resigned from the police force and the groundbreaking unit he’d built into the world’s first modern detective agency.

But when the public learned that he had a lucrative side-project of kidnapping young women and then depositing them at convents at their parents’ request, his business slowed to a trickle.

Vidocq was at last forced to shutter his agency and retire to private life, later running a paper mill to provide employment for former convicts.

Throughout his long career, Vidocq’s daring adventures and transcendent achievements captured imaginations across France. Among those he befriended was author Honoré de Balzac, whose character Vautrin, also a convict who rises to a high rank in the police, was directly inspired by Vidocq. 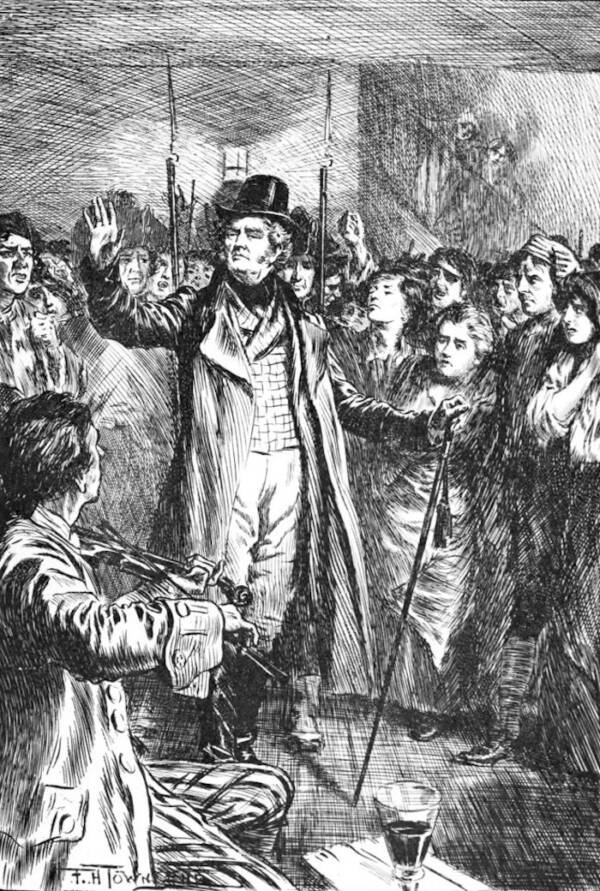 Wikimedia CommonsThroughout his career as a detective, Vidocq displayed remarkable cunning and bravery in locating and arresting hardened criminals.

Edgar Allan Poe’s detective C. Auguste Dupin was likewise inspired by Vidocq, in a series of stories that were among the earliest examples of detective fiction.

But perhaps the most famous and lasting characters based on Vidocq are found in Victor Hugo’s 1862 novel Les Misérables.

Hugo, a passionate advocate for ex-convicts’ rights and the abolition of capital punishment, split Vidocq into two of the main characters: Javert, the dogged policeman with an abnormal knowledge of outlaw society, and Jean Valjean, a man who is forced to steal out of desperation and forever after hounded for his past.

Through these and other portrayals and inspirations, Eugène-François Vidocq has lived on over 200 years since his death on May 11, 1857, at the age of 81.

And for France, his impact is a part of daily life. In 1941, after decades of steadfast detective work, the Sûreté Nationale formed part of the backbone of the modern Police Nationale, France’s nationwide law enforcement agency to this day.

After uncovering the astounding story of Eugène-François Vidocq, learn about Alphonse Bertillon, the French detective who ushered in the modern era of forensic photography. Then, learn about how August Vollmer drew inspiration from Vidocq in his efforts to revolutionize and militarize police in America.