“The Trial Of The Century” – A Sordid Tale Of Sex, Jealousy, And Murder In High Class Manhattan

The tumultuous relationships of Evelyn Nesbit proved to be disastrous... and deadly. 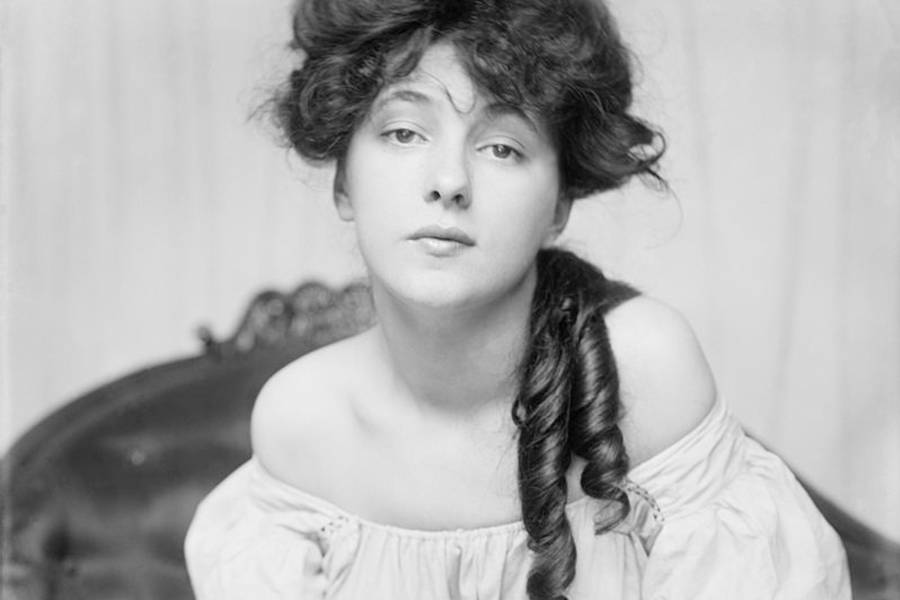 Wikimedia CommonsEvelyn Nesbit in 1901. Her affair with Stanford White and her marriage to Harry Thaw would thrust her into the spotlight by the time she was 20 years old.

IT WAS DUBBED “THE TRIAL OF THE CENTURY” at the time. A sordid tale of love and jealousy culminating in a public murder in the heart of New York gripped the nation and left the woman at the center of it surprisingly unscathed.

Evelyn Nesbit was without a doubt a lovely woman, albeit a reckless one. Upon moving to New York City in 1898 at the tender age of 14, she became a chorus girl, an artist’s model, and eventually an actress. Though she’d been sheltered all her life in her small Pennsylvania hometown, the big city quickly changed her.

While dancing in the chorus, she regularly met men who offered her gifts and dinners. Being so young, she usually turned the men down, as they were often much older. Before long, she would get the attention of a much older wealthy socialite named Stanford White.

Stanford White was an architect most notable for the arch in Washington Square Park and the second iteration of Madison Square Garden. While his biographer described him as a “big, bluff, open, lovable man of superb talent,” he was known for more than his architecture.

White was also known for his predatory nature. He was referred to, almost comically, as a “predatory satyr” with a desire for young girls and wild sex. It wasn’t a secret. After all, he adorned the top of Madison Square Garden with a salacious nude statue to the protests of many. What wasn’t comical was the fact that girls seemed so enamored with his wealth and power that there was an endless stream of them at his aptly named underground hovel, the Sewer Club. 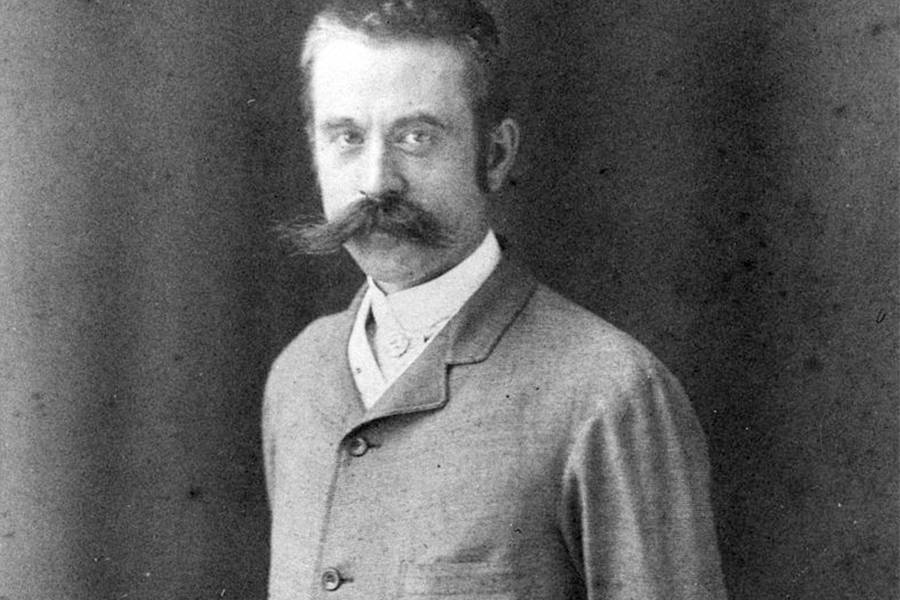 After seeing her dance in the chorus, White convinced one of Nesbit’s fellow chorus girls to bring her to his apartment on West 24th Street for a drink. Nesbit happily agreed, tempted by the invitation and as enamored with the socialite as all the women before her.

After some lunch, Evelyn Nesbit was taken up to White’s private quarters on the second floor of his lavish multi-storied apartment. There, he took her to a room entirely covered in red velvet, with a swing hanging from the high ceiling. Though she described Stanford White as “terribly old,” Nesbit was encouraged by the swing, seeing it as a sign of youthful playfulness. She remained at the apartment for hours, swinging through the room as White pushed her.

Over the next few weeks, Stanford White, 47 at the time, courted the 14-year-old Evelyn Nesbit and even gained the trust of her overprotective mother. Then, as was destined to happen from the beginning, White took advantage of the starlet.

While her mother was away for the weekend, White invited Nesbit to stay at his apartment. After a night of imbibing champagne, Nesbit awoke naked in White’s bed with her legs covered in blood. When she cried out, White comforted her.

Despite her doubts and her quick realization of the velvet swing’s true purpose, Evelyn Nesbit refused to leave Stanford White. Soon, she was seeing him every day, and spending many nights in a row at his lavish apartment, swinging on the velvet swing. He showered her with gifts, including pearl necklaces, diamond rings, and white fox furs.

At the same time, however, another socialite had noticed Nesbit. His name was Harry Thaw. 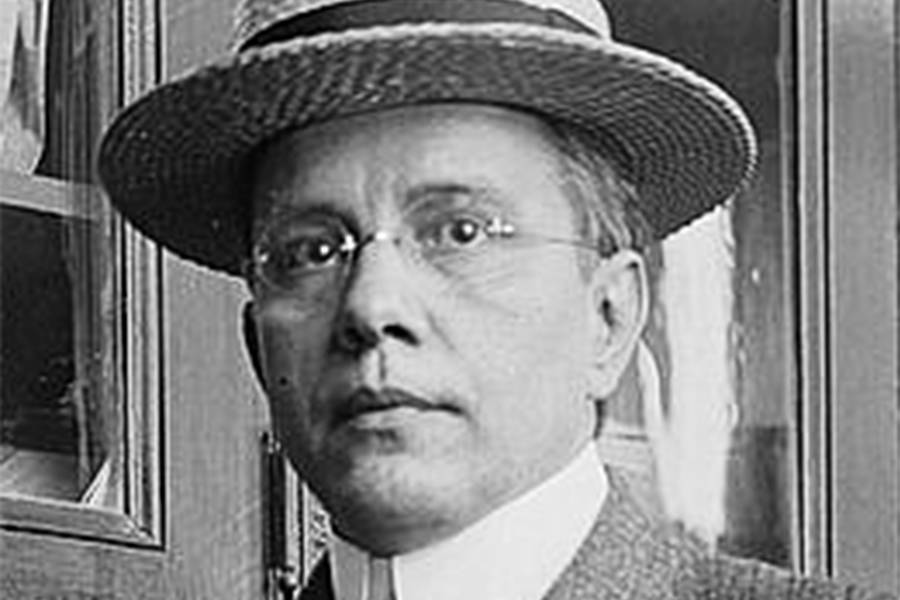 Thaw, the heir to a multimillion-dollar railroad fortune, was a notorious partier of Gatsby-like proportions. He spent his time, and his father’s money, lavishly, buying copious amounts of alcohol, soliciting prostitutes, and tending to his speedball habit.

When he first met Evelyn Nesbit, Thaw introduced himself as a Mr. Munroe. He attended 40 of her performances and sent her flowers, letters, and larger gifts. At first, she declined his advances, though she eventually succumbed to them. As Stanford White had, Harry Thaw also became set on impressing Nesbit’s mother, by promising a lifetime of care and protection for her daughter.

Eventually, he revealed himself to be the eccentric millionaire that he was, to the delight of the Nesbit women. Upon his revelation, he took the two women on a tour of Paris by way of a luxury ocean liner. On this vacation, Evelyn Nesbit revealed her tumultuous relationship with Stanford White, telling Thaw all about their first night together and White’s velvet swing. Appalled, Thaw told Nesbit she would never have to worry. Upon returning to the states, she moved her into Thaw’s mansion. Soon after, they were married.

Unbeknownst to his new wife, Harry Thaw had a history with Stanford White. Rumor has it the very reason he had courted Evelyn Nesbit in the first place was to steal her from White, who he believed was blackmailing him. All Nesbit knew of her new husband and ex-lover’s relationship was that Thaw had promised to hurt Stanford if he ever came near Nesbit again. 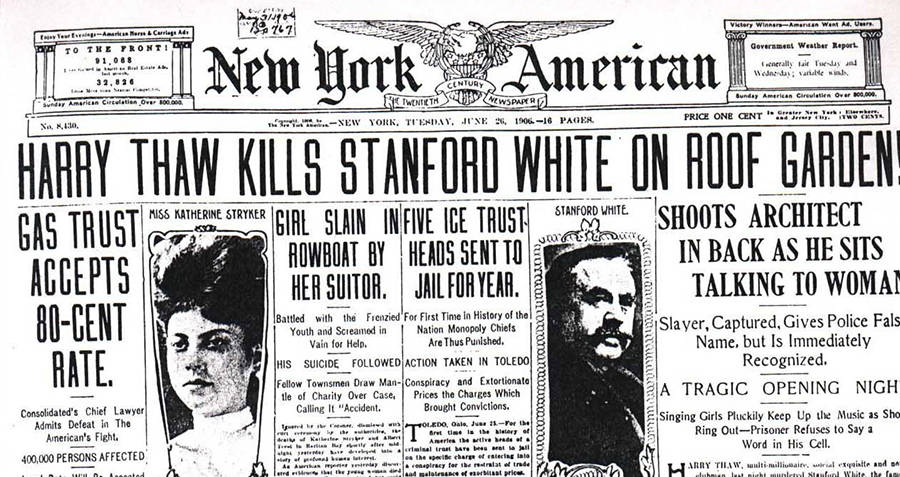 One evening in June 1906, the couple was dining at an upscale eatery called Cafe Martin when Evelyn Nesbit noticed Stanford White sitting at the bar. Startled, she scrambled to tell her husband, but by the time she’d gotten his attention, White had left.

Though he seemed unperturbed by White’s presence at Cafe Martin, Thaw suddenly announced that he had surprise tickets for a new musical, Mamzelle Champagne, that was playing on the rooftop theater of Madison Square Garden. Coincidentally – or perhaps quite the opposite – White also had plans to attend the performance.

As everyone was settled in their seats – spindly chairs grouped around tables covered in white tablecloths – Thaw stood up and made a beeline for White. Pulling a pistol from his coat, he fired three shots at the man from less than two feet away. Two hit White in the back of the head, the third in his shoulder.

White fell to the ground as Thaw stood over him holding the pistol triumphantly.

At first, no one understood what had happened, as party tricks amongst high society playboys was a common occurrence at public gatherings. However, when audience members noticed that Stanford White was missing half of his face, they began to panic.

“I did it because he ruined my wife!” Harry Thaw yelled, brandishing his pistol. “He had it coming to him! He took advantage of the girl and then deserted her!” 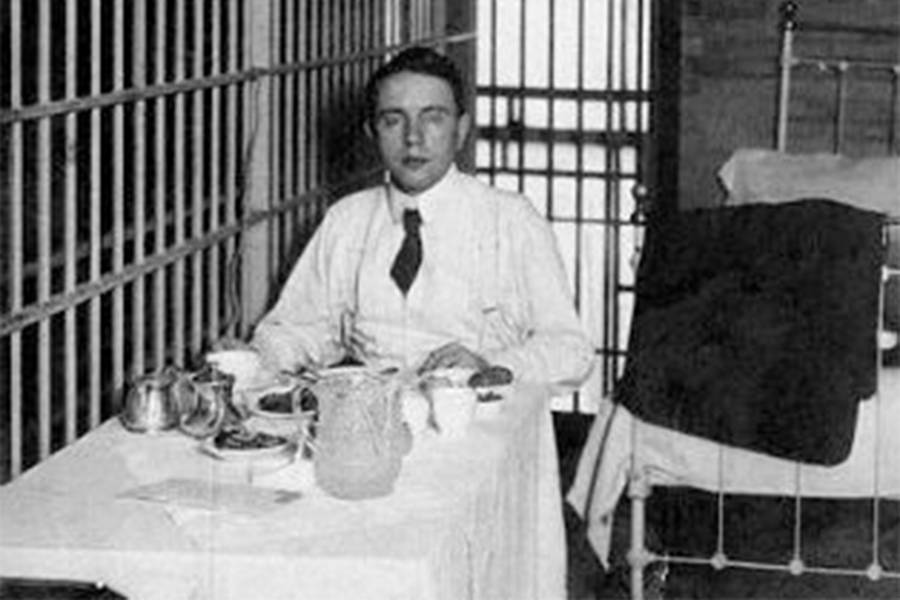 Wikimedia CommonsHarry Thaw in prison, where he was treated like royalty – given five course meals on white tablecloths, and a full size bed.

Thaw’s lawyer argued in court that his client was insane and that he deserved not to go to prison, but to go to an asylum where he could be cared for properly. The prosecution argued otherwise.

Using testimony from Evelyn Nesbit and character witnesses, the prosecution painted a picture of a deeply disturbed man, but one who nonetheless knew exactly what he was doing when he killed Stanford White. The trial resulted in a hung jury.

Upon being retried two years later for Stanford White’s murder, Nesbit altered her testimony to emphasize her husband’s alleged mental instability. This time, he was declared insane and confined to Matteawan State Hospital. His family’s wealth provided a comfortable life for him there, and after seven years he was released. However, he was soon sent back for whipping a teenaged boy.

Despite the societal scandal that rocketed her to fame, Evelyn Nesbit soon disappeared into relative obscurity. She moved to Los Angeles and becoming a painter. She died in 1967 at the age of 82.

After learning about Evelyn Nesbit and the trial of the century, check out another infamous New York murder, the murder of Kitty Genovese. Then, check out these photos of Times Square before all of the lights and billboards.