Tokyo Rose was a name given to several English-speaking women who broadcasted Japanese propaganda during WWII. Troops in the South Pacific used these women and their messages to lower Allied troop morale in the Pacific.

Despite reading anti-American scripts, Tokyo Rose the persona often prefaced her messages with subtle warnings and usually delivered them in a tongue-and-cheek manner, undermining the broadcasts’ intent.

The most famous name associated with Tokyo Rose is Iva Toguri, a Los Angeles native who had become stranded in Japan while visiting relatives at the start of WWII. Her involvement as a propagandist got her arrested and convicted of treason, though she was released in 1956. It would be another 20 years before she would be formally pardoned. 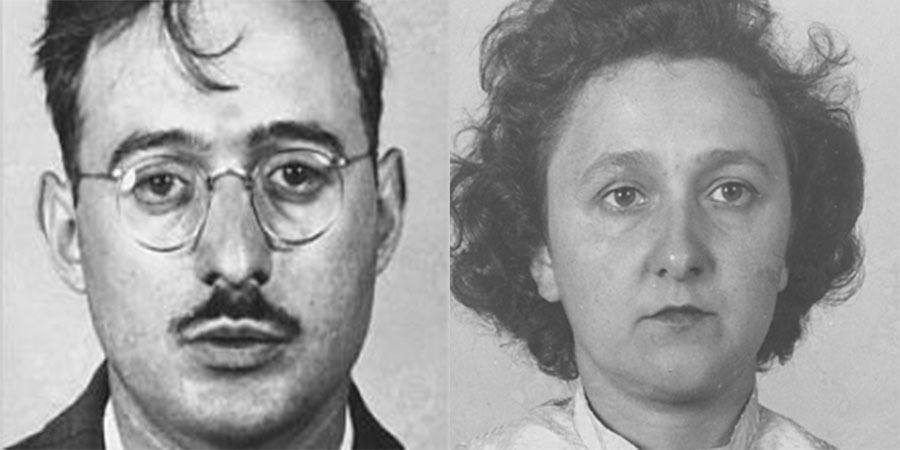 Julius and Ethel Rosenberg, convicted of treason and sentenced to death by electric chair. Image Source: Biography and History

Julius and Ethel Rosenberg were an American couple accused of spying for the Soviet Union during the Cold War. Both Rosenbergs were from Jewish families in NYC. They married in 1939, and Julius served in the military throughout WWII until he was discharged for previous involvement with the Communist Party.

Throughout the Cold War, the Rosenbergs provided thousands of top-secret reports on aeronautics and atomic bomb construction to the Soviets, as well as recruiting sympathizers. Both Julius and Ethel were charged with treason and conspiracy to commit espionage, and in 1950, a federal grand jury indicted them.

Ethel was unable to complete her testimony and left the courthouse, her attorney begging for parole so that she could make arrangements for her two young children. The request was denied. Both Rosenbergs were pressured to incriminate any others who had been involved in the spy ring, but they provided no more information.

The trial began in March 1951. When asked about their involvement in the spy ring, the couple asserted their 5th Amendment right against self-incrimination. They were convicted and sentenced to death the following month, and were executed by electric chair on June 19th, 1953.

Decoded Soviet documents showed Julius had indeed been involved as a courier and recruiter for the Soviets, but Ethel’s involvement was not so clear. It seems that her brother, David Greenglass — who had worked on the Manhattan Project — had thrown her under the bus in his testimony to save his own wife, who had been the one typing up the documents.

In 2001, Greenglass recanted his testimony about Ethel, saying, “I frankly think my wife did that typing, but I do not remember.” He said he gave false testimony to protect himself and his wife, and had been encouraged by the prosecution to do so. Still, Greenglass felt no remorse, as he “would not sacrifice my wife for my sister.”

The Rosenbergs’ two sons, Michael and Robert, spent the majority of their lives trying to prove their parent’s innocence. They came to believe that while their father had likely been involved in espionage activities, their mother had really been innocent.

Next, check out these famous last words and history’s greatest insults.