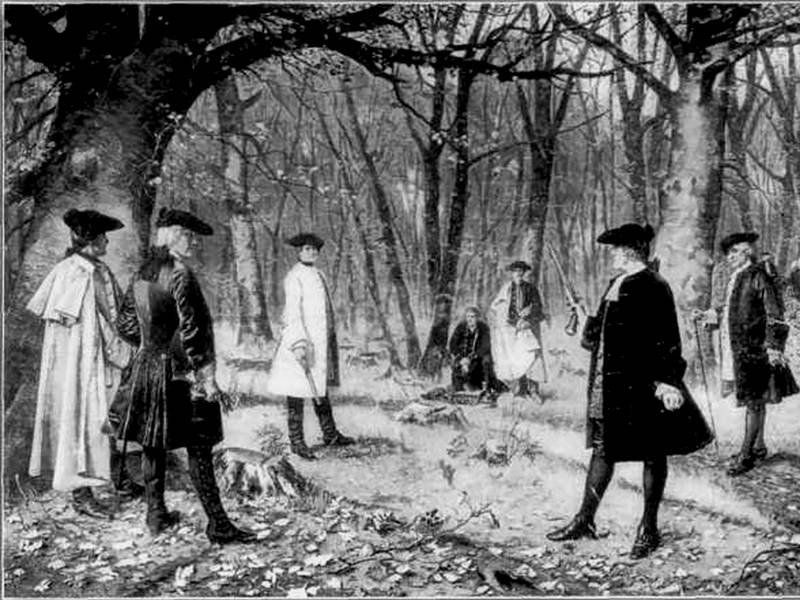 The Burr–Hamilton feud is one of the most prominent spats in American history, and actually involved a physical duel between the two political big wigs. Former Secretary of the Treasury Alexander Hamilton and and sitting Vice President Aaron Burr commenced their long standing dispute in 1791 when Burr won a United States Senate seat from Philip Schuyler, Hamilton’s father-in-law. Burr snagged the veep spot in Thomas Jefferson’s presidency, and naturally, Hamilton scribbled some inflammatory letters in response. The “personal” letters Hamilton wrote to his friend, James McHenry, vocalized Hamilton’s disdain and animosity toward Burr being selected as VP candidate, including this little nugget:

“Nothing has given me so much chagrin as the Intelligence that the Federal party were thinking seriously of supporting Mr. Burr for president. I should consider the execution of the plan as devoting the country and signing their own death warrant.”

Fortunately for Hamilton, Burr didn’t last very long as vice president, and after being dropped from the 1804 election, decided to run for the governorship of New York instead. Hamilton’s animosity toward him, however, didn’t cease, and he campaigned vigorously against Burr by penning even more incendiary journalistic pieces. Burr eventually lost to Morgan Lewis, a Democratic-Republican endorsed by Hamilton, and what followed was a pistol duel to the death.

On July 11, 1804, At Weehawken in New Jersey, Burr shot and fatally wounded Hamilton. Burr was indicted for murder in both New York and New Jersey, but these charges were later either dismissed or resulted in acquittal. His political career, however, was six feet under.