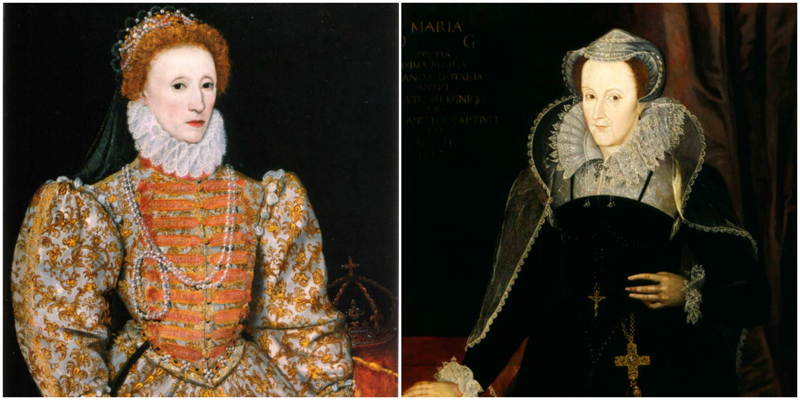 Queen Elizabeth I vs. Mary, Queen of Scots

Most know Queen Elizabeth I for hearkening England’s Golden Age and love or loathe her historical legacy in equal, but there was one particular lady that Queen Elizabeth was not fond of: Mary, Queen of Scots.

The two had a very public dispute over sovereignty that eventually led to Mary’s demise. As the daughter of Henry VIII and Anne Boleyn, Elizabeth had a legitimate, if often contested, claim to the throne. But following her father’s purposeful move away from the Catholic Church, when she assumed the throne the fate of England’s faith greatly rested in Elizabeth’s hands. In 1558, the protestant queen declared that England was indeed a Protestant country, which inspired the ire of many English Catholics who didn’t think that Elizabeth was the rightful heir to the English crown.

Thus many looked toward Mary, Queen of Scots, to replace Elizabeth. Mary Queen of Scots was the Catholic heir to the Scottish throne, but after a slew of scandals, Mary Stuart was forced to flee the country. She looked to Elizabeth for help and support, but Elizabeth was suspicious that she was going to raise Catholic support and usurp her title, so she kept Mary a virtual prisoner for the next eighteen years in Lochleven Castle. By 1586, Elizabeth found conclusive proof in the form of letters that Mary was plotting her murder. The feud ended officially on February 8, 1587, when Elizabeth signed a death warrant and Mary Queen of Scots was beheaded at Fotheringay Castle.