7 Groundbreaking Interracial Couples And The Inspiring Stories Behind Them

For decades, interracial relationships around the world were taboo and sometimes even illegal. Here's how these couples persevered despite their struggles.

We might not bat an eye when we see an interracial couple walk down the street today. But before modern gains were made in the fight for equality, these relationships were often considered controversial. Those who dated outside of their race often risked arrest, harassment, or even worse — and even famous interracial couples faced intense scrutiny.

In modern times, many countries have made great strides in marriage equality. For the United States, one of the most famous moments of progress was the historic Supreme Court ruling in Loving v. Virginia, prompted by the interracial marriage between Mildred and Richard Loving. The couple’s court victory came nearly a decade after they were married.

Their victory was not only important for them. The court’s decision was also significant for interracial couples throughout the entire country.

And in more recent years, America has seen another milestone: the first interracial couple to represent the White House through Vice President Kamala Harris, who is the daughter of Jamaican and Indian immigrants, and her husband Douglas Emhoff, who is white and Jewish.

Take a look at some of the most famous interracial couples below. 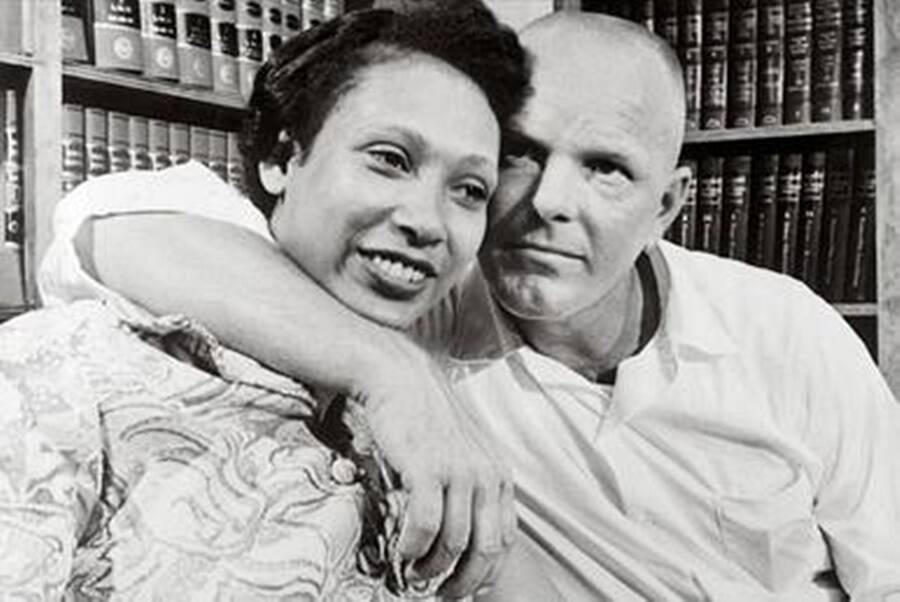 Without a doubt, Mildred and Richard Loving are one of the most famous interracial couples in American history. Their case Loving v. Virginia resulted in a ruling by the Supreme Court that declared all laws against interracial marriage as unconstitutional, according to The New York Times.

But although this was a huge victory, the Lovings had suffered for years before their marriage was legally recognized by the government.

Both Richard and Mildred (née Jeter) were born and raised in Central Point, a racially diverse neighborhood north of Richmond, Virginia. Mildred’s family was of mixed African American and Native American ancestry. Richard’s family was white. It was a small community where intermingling across racial lines was common. The children of the families grew up together.

“It never was like a lot of other places. It doesn’t matter to folks around here,” Richard told Life magazine after the Lovings’ appeal to the Supreme Court. “They just want to live and be left alone. That’s the way I feel.”

Richard was close friends with Mildred’s older brothers and often visited their house. Richard and Mildred later began dating, and Mildred became pregnant when she was 18 years old. Their son was born in January 1957. By that point, Richard had moved in with Mildred’s family to be with her and their son. The couple would eventually have three children together.

Richard and Mildred decided to get married in 1958. At the time, Virginia was one of 24 states where interracial marriages were still illegal. So in order to get around this, the couple traveled to Washington, D.C. to wed.

Five weeks later, county sheriff officials stormed their home at 2 a.m. on an anonymous tip. When the sheriff asked Richard who was sleeping with him, Mildred said that she was his wife. “Not here you’re not,” the sheriff replied. He booked the couple into jail. Richard was held for one night, but he was not allowed to bail out his wife. She was kept in jail for nearly a month.

“When my late husband, Richard, and I got married in Washington, D.C. in 1958, it wasn’t to make a political statement or start a fight. We were in love, and we wanted to be married.”

The married couple struck a plea bargain, which suspended the judge’s one-year prison sentence on the condition that they left Virginia immediately, and that they would stay out of the state for at least 25 years. The Lovings then moved to Washington, D.C., where they lived for five years.

But the separation from Mildred’s family — who were still in Virginia — was too much for the young mother. The couple was arrested again while visiting Mildred’s family but was able to escape prosecution. They soon sent a letter to then-U.S. Attorney General Robert F. Kennedy, who suggested that they contact the American Civil Liberties Union (ACLU) about their case.

According to CNN, the ACLU challenged the court ruling against Richard and Mildred’s marriage, arguing that Virginia’s anti-miscegenation law violated the couple’s equal rights protection under the 14th Amendment. In 1967, nearly a decade after they were married, the Supreme Court struck down anti-miscegenation laws, granting legal protection to the Lovings’ marriage and to other interracial couples’ marriages throughout the country.

Sadly, Richard Loving was killed by a drunk driver in 1975, seven years after the Supreme Court ruling. Mildred was injured but survived the crash.

Since the historic ruling, the Lovings have become icons for equality. Mildred released a statement on the 40th anniversary of the ruling in 2007: “I am proud that Richard’s and my name is on a court case that can help reinforce the love, the commitment, the fairness, and the family that so many people, Black or white, young or old, gay or straight, seek in life. I support the freedom to marry for all. That’s what Loving, and loving, are all about.”

Mildred passed away from pneumonia a year later. The couple’s historic fight for equality was later adapted into the 2016 feature film Loving.