The Legend Of Lavinia Fisher, The Woman Said To Be America’s First Female Serial Killer

Lavinia Fisher owned an inn outside of Charleston, South Carolina, where some say she murdered hundreds of travelers before her arrest and execution in 1820. 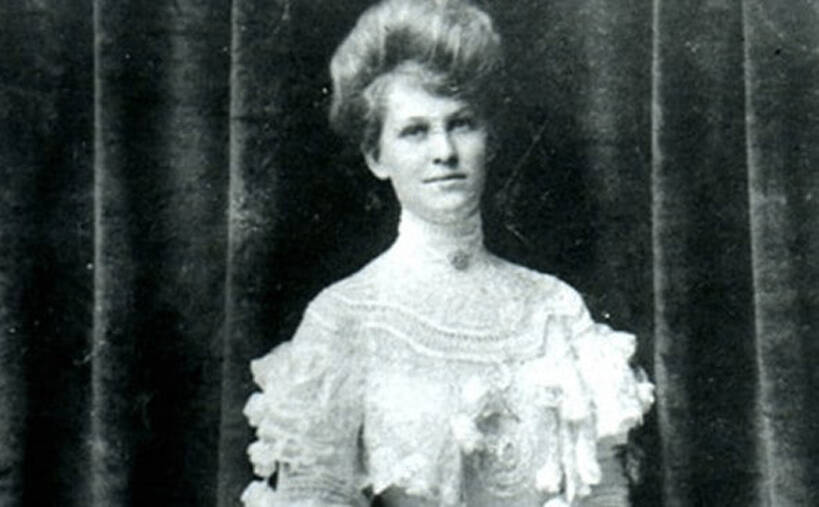 The Post and CourierThough this is almost certainly not a photograph of Lavinia Fisher, it is widely used as a depiction of the reportedly beautiful woman.

In the early 1800s, Lavinia Fisher ran an inn just outside of Charleston, South Carolina. She would charm male guests who stopped for the night on their way to the port city, chat with them about their travels — then poison them with oleander tea. Or at least that’s how the story goes.

Lavinia Fisher really did own an inn along the road to Charleston, and she was put to death for highway robbery in 1820, according to The Post and Courier. But the rest of her story has been filled in over the years by Lowcountry locals, horror tale enthusiasts, and ghost tour leaders looking to entertain their customers.

Some claim that Lavinia was the first female serial killer in America, with police finding hundreds of skeletons buried beneath the inn after her arrest. Others don’t believe she ever killed anyone at all.

So what’s the truth behind the legend of Lavinia Fisher? Was she actually a serial killer? Or is she simply the victim of an embellished myth?

Lavinia Fisher And Her Alleged House Of Horrors

In 1819, the Six Mile Wayfarer House on the outskirts of Charleston, South Carolina hosted travelers and traders heading to and from the city. Lavinia Fisher ran the inn with her husband, John. The attractive young couple was well-respected in town — even though Lavinia was notorious for flirting with male guests.

The beautiful 27-year-old woman would subtly turn her conversations with the men toward finances, asking them what line of work they were in or what they planned to buy or trade in Charleston. If they seemed wealthy, Lavinia would serve them tea poisoned with oleander leaves before sending them off to their room for the night.

John Fisher would then creep into the men’s rooms and rob them after the tea worked its magic. In some versions of the legend, the unwary guests die of poisoning and the Fishers bury them beneath the inn. In others, the tea simply renders the men unconscious and John finishes them off after he steals their money.

And in the most elaborate version of the tale, the men’s bodies fall through the floor of their room after a trap door the Fishers rigged beneath the bed suddenly opens.

These stories first began circulating when men in the area started complaining about a group of crooked highwaymen cheating at poker games hosted by local inns, such as the one run by the Fishers and the nearby Five Mile House. Furthermore, a farmer named Stephen LaCoste reported a cow stolen right out of his pasture. He accused the highwaymen of expanding their gambling schemes to outright thievery.

John and Lavinia Fisher happened to be a part of this gang of highwaymen.

According to Legends of America, two men showed up at the Six Mile Wayfarer House the next morning, attacked Ross, and brought him to the group of highwaymen. When he spotted Lavinia Fisher, he was relieved because he thought the beautiful woman would help him. Instead, she choked him and smashed his head through a window.

Somehow, Ross escaped and fled the scene, leaving the highwaymen to reclaim the Six Mile Wayfarer House as their criminal lair.

Had the group of criminals occupying the inn let things cool down at this point, perhaps Lavinia Fisher’s story would have had a different ending. However, just after Ross escaped, Fisher was right back to her old tricks. She soon served a new guest by the name of John Peoples some of her famous tea.

Luckily for Peoples, he didn’t care for tea. But not wanting to seem impolite, he dumped the tea out while Lavinia wasn’t looking. She cooked for him and chatted him up for some time afterward. Finally, she led him to his room.

Suddenly, Peoples felt uncomfortable. He realized he’d disclosed a lot of information to Fisher that might make him a target for robbery.

In an attempt to stay up and keep watch, Peoples dozed off in a chair rather than the bed — until a loud noise woke him. He saw that the empty bed had disappeared into what was now a giant hole in the floor. Peoples escaped his room via a window and rode his horse into Charleston to alert authorities. Now, police had both Ross’ and Peoples’ testimony against the Fishers, and they immediately took action.

In February 1819, the sheriff collected another posse of citizens and surrounded the Six Mile Wayfarer House. They forcibly removed the Fishers along with four other members of the gang and set the inn ablaze. In an outbuilding, they found the hide of the missing cow. John and Lavinia Fisher were taken to jail. 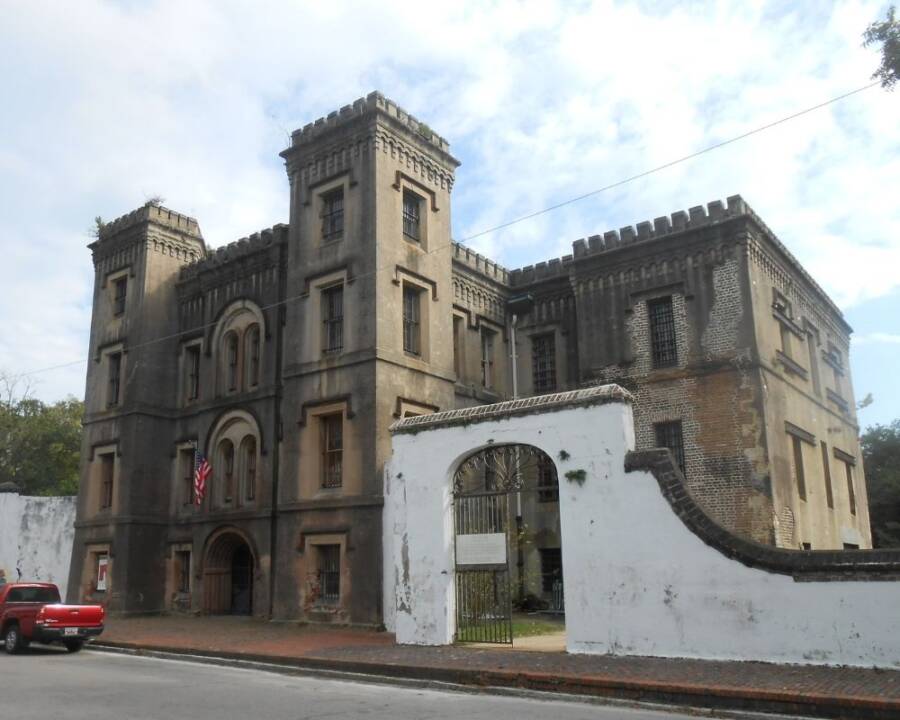 Wikimedia CommonsThe Old City Jail in Charleston is reportedly haunted by the ghost of Lavinia Fisher.

According to legend, police dug up the grounds surrounding the inn and discovered a maze of hidden passageways. They reportedly found items belonging to dozens of guests, a mechanism for opening the floorboards beneath the bed, and a plethora of human remains.

The Imprisonment And Execution Of John And Lavinia Fisher

John and Lavinia Fisher pleaded not guilty, but at their trial in May 1819, a jury sentenced them to death by hanging for the crime of assault with intent to murder. The courts, however, gave the Fishers time to appeal their conviction.

While waiting on the appeal, the couple concocted an escape plan. Since they were kept together in a cell that was not heavily guarded, they were able to craft a rope out of blankets and lower it through a hole John created beneath their barred window. On the day of their planned escape, John made it safely to the ground. But when Lavinia tried to climb down, the rope snapped, leaving her stranded.

John refused to flee without his wife, and while he devised a plan to break her out, he was captured and imprisoned once again.

In January 1820, the courts formally rejected the Fishers’ appeal and scheduled their execution for Feb. 4. This date was later pushed back so the Fishers could have time to make peace with God.

A local minister, Reverend Richard Furman, counseled the couple to prepare for their deaths. John begged the minister to save his mortal soul, but Lavinia would not speak, believing a pardon was coming.

At the time, there was a law stating that married women could not be executed, so Lavinia thought she was safe. According to SYFY, the judge said there was no law against executing a widow, so he would simply have John hanged first.

On the morning of Feb. 18, 1820, John and Lavinia Fisher were transported from their jail cell to the gallows. John quietly prayed with Rev. Furman and proclaimed his innocence to the crowd of onlookers gathered to watch the execution.

Lavinia did not proceed with dignity. Donned in her wedding dress, she screamed and pleaded for mercy. She refused to walk to the gallows, so the guards had to drag her.

Finally, coming to terms with her fate, she shouted into the crowd, “If you have a message you want to send to hell, give it to me — I’ll carry it!” Then, before the executioner could hang her, she promptly jumped off the scaffold on her own. 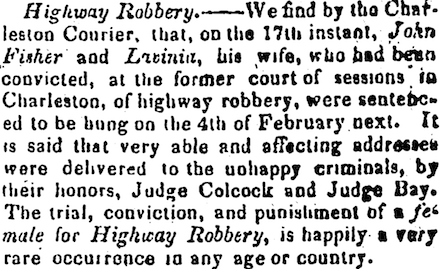 Executed TodayA newspaper article on the Fishers published in National Advocate for the Country on Jan. 28, 1820.

The Facts Behind The Enduring Legend

Much of what actually occurred in the case of John and Lavinia Fisher has become exaggerated through the lens of time. Factual details are difficult to find, though several newspaper articles from 1819 and 1820 do cover the events surrounding the Fishers’ arrest and execution.

In his book Six Miles to Charleston: The True Story of John and Lavinia Fisher, former homicide detective Bruce Orr debunks much of the myth surrounding Lavinia Fisher’s story.

The true tale, Orr says, has no trapdoor. After all, no houses in the South Carolina Lowcountry have basements. There’s no wedding dress, either. A newspaper article from the time confirms that the Six Mile Wayfarer House was burned to the ground, and none of the Fishers’ belongings would have survived.

In fact, nearly the entirety of the execution story is fabricated. The version printed in the local newspaper the morning following the Fishers’ deaths simply states: “A little past 2 o’clock the husband and wife embraced each other upon the platform… when the fatal signal was given — the drop fell — and they were launched into eternity. She died without a struggle or a groan.”

And there likely weren’t even any murders. Two bodies were found in the woods surrounding the Six Mile Wayfarer House shortly after the Fishers were arrested, but there’s nothing tying them to the couple.

So how did we get from Lavina the historic highwaywoman to the murderous legend?

The execution of the Fishers garnered much public interest. Although Lavinia Fisher was not the first female sentenced to hang, it was novel to see a woman die for the capital crime of highway robbery — especially with her husband beside her.

Much of the legend originates with a Scottish businessman named Peter Neilson, who claimed that he was present at the Fishers’ execution. He wasn’t. But he chose to embellish — then publish — a version of the story with lots of salacious details nonetheless.

Then what’s the real story here? It’s hard to know for sure, but some believe the Fishers were actually innocent victims. According to CHS Today, they may have been targeted because the government wanted their land to build a naval base. After all, the old Charleston Naval Hospital now sits on the land where the Six Mile Wayfarer House once stood.

Today, Lavinia Fisher’s ghost is said to haunt the jail where she spent the final year of her life. Perhaps someday she’ll divulge the truth behind the legend herself.

After discovering the facts behind the legend of Lavinia Fisher, learn about Elizabeth Bathory, the Hungarian woman who allegedly killed hundreds of servant girls in the early 1600s. Then, read about the terrifying female serial killer Aileen Wuornos.