The single-edged sword was found among the ruins of a monastery near Thessaloniki, Greece and likely dates back to a battle in the 14th century. 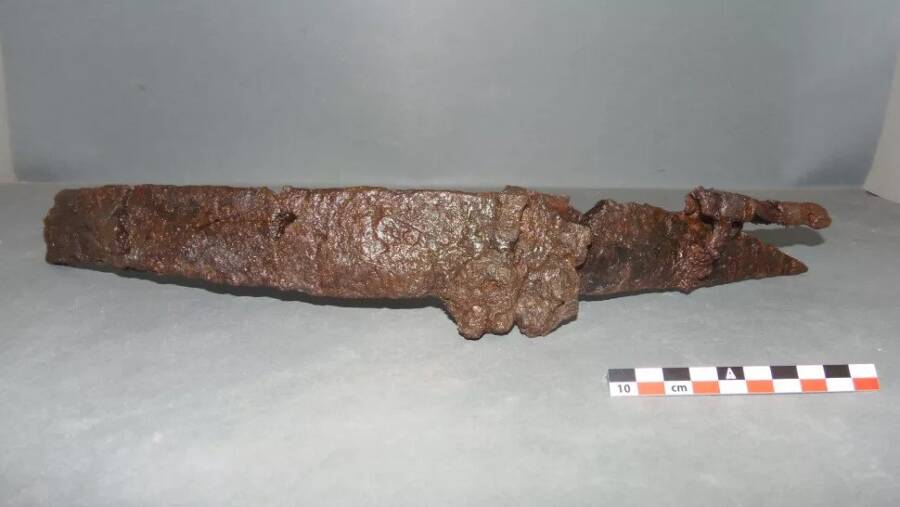 E. Maniotis & T. DogasThe saber is in poor condition and appears to have been bent during the attack on the monastery.

Hundreds of years ago, a battle broke out at a monastery along the Greek coast. There, raiders — likely from Turkey — clashed with Byzantine locals. One side wielded a terrifying saber, and archaeologists have found the weapon among the monastery’s ruins.

“It’s hard to determine if the sword belonged to the Byzantine defenders, or to the probably-Turkish [raiders],” Errikos Maniotis, an archaeologist and doctoral candidate at Masaryk University in Brno who studied the sword, told Live Science. “They both used similar weapons in this period.”

The 18-inch saber was first found between 2000 and 2001 at the ruins of a coastal Christian monastery about 40 miles away from Thessaloniki, Greece, but recent excavations have revealed more details about its past.

Though it’s in poor condition — the sword seems to have been bent during the attack — it’s an exciting find, as ancient iron weapons usually deteriorate over time. This saber is still in decent enough condition that archaeologists can make out a couple of metal rings that once constituted its scabbard, and they say it’s an especially rare discovery.

“[T]his particular sword is the only find from this category of swords in a closed archaeological assembly in Greece,” Maniotis and his fellow archaeologist, Theodoros Dogas of the Ephorate of Antiquities of Chalcidice and Mount Athos, wrote. “It may in fact be one of the few swords of the late Byzantine period found in Greece.”

Alongside the saber, the archaeologists found evidence of a fire, as well as a cache of other weapons including axes and arrowheads.

They noted that the charred debris and the weapons seem to suggest that “the tower was destroyed by strong fire after a raid.” Because of the style of pottery found at the monastery, the archaeologists also suspect that the raid happened during the violent and volatile days of the 14th century.

But it’s unclear if the saber itself came from the raiders or the Byzantines who mounted the monastery’s defense. 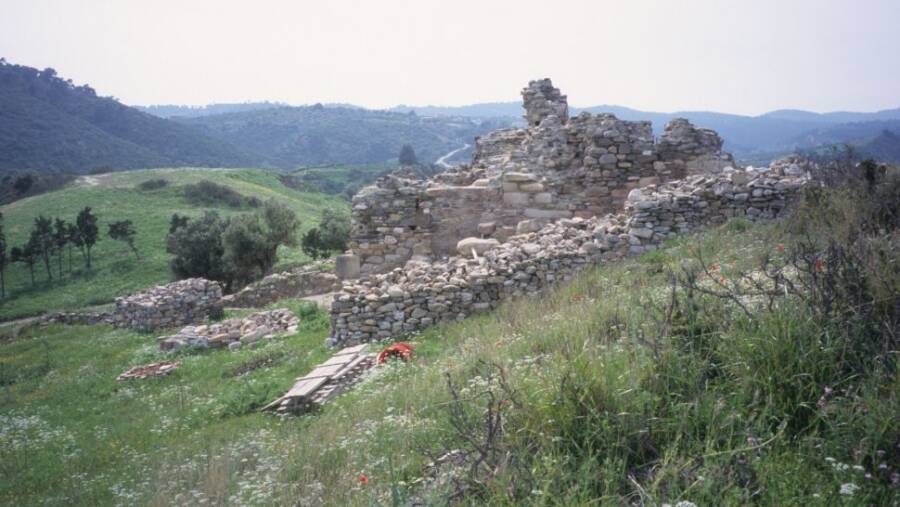 E. Maniotis & T. DogasThe ruins of the Greek monastery seem peaceful today, but they were once a site of great violence.

Both Turkish and Byzantine warriors used curved, single-edged swords like the one found at the monastery, Maniotis told Live Science. Sabers were used in Turkey for centuries and appear frequently in Turkish art. But the Byzantines also developed a taste for the weapon.

And clashes between the two people were frequent during the 14th century. According to Live Science, archaeologists have speculated that the saber in question could date back to a number of different violent moments.

In 1344, for example, Turkish pirates raided the coast and kidnapped administrators from the Mount Athos monastery. The following year, troops loyal to the Serbian king Stefan Dušan began battering the region. And between 1383 and 1387, raiders often stormed the coast in search of food. Since archaeologists found grain seeds at the monastery ruins, it’s likely that it held the kind of food supplies that raiders may have been after.

Little else is known about the monastery itself. Live Science notes that, although it appears in historical records as early as the 11th century, it’s unclear if the monastery operated independently or if it was beholden to the more powerful Mount Athos monastery.

According to Live Science, Maniotis and Dogas plan to describe the saber and other artifacts from the monastery in more detail in an upcoming research paper. Thus, for the moment, the single-edged sword is merely a hint of the great, unknown violence that once unfolded on the Greek coast.

After reading about the saber found in Greece, learn about the Greek farmer who stumbled upon a 3,400-year-old Minoan tomb under his olive grove. Or, discover the stories behind these five crucial battles in ancient Greece.