Just reading about these famous spies and their tales of sex and secrecy will make your life seem more intriguing. 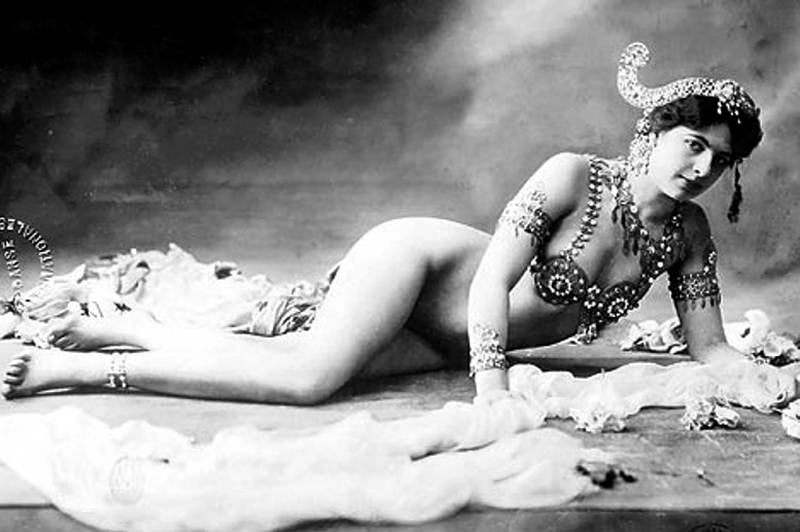 Wikimedia CommonsMata Hari, exotic dancer and one of the world’s most famous spies, poses for the camera.

These spies made a name for themselves at home and abroad for their compelling mixture of sex, scandal, and secret dealings. Here are ten of the most dubious, famous spies in history: 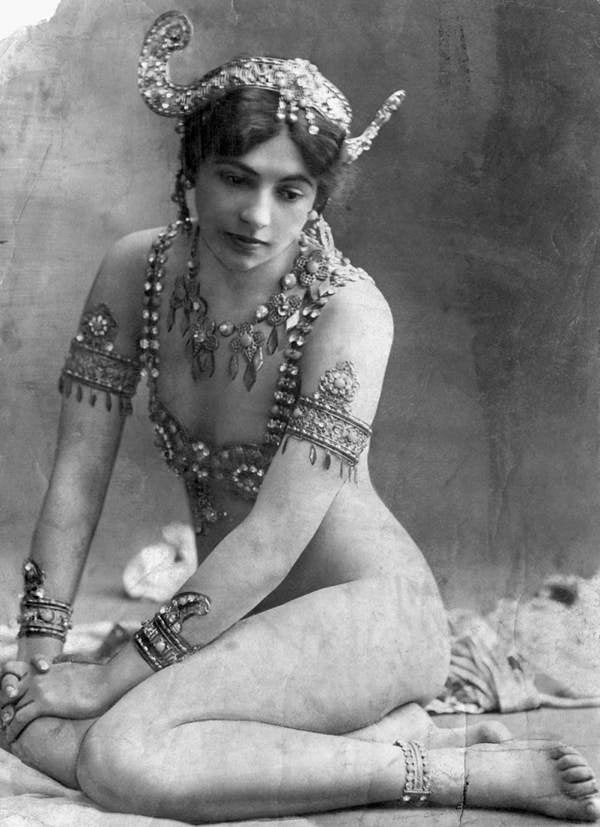 The GuardianThough Mata Hari wasn’t afraid of showing skin, she was almost never photographed without a bra. Some say she was insecure about her small chest.

Possibly one of the most famous spies of all time, Mata Hari was an exotic dancer and high-class prostitute in Paris who spied for Germany during World War I.

The Dutch-born Margaretha Geertruida Zelle didn’t start out as a spy; she was a dancer, and in the early years of her career, she took Paris by storm. Her willingness to shed clothes and show skin made a dramatic impression, especially accompanied by a fictionalized exotic past in the East.

Her dancing was new, provocative, and eye-catching — but it was her mannerisms that stole the show. She was sexy, outrageous, and never media shy. She posed for hundreds of pictures, many of them partially nude, and hopped in and out of the beds of the rich and famous.

Things came to an end, however, as the storm clouds of World War I gathered and the novelty of Mata Hari’s act faded — imitators sprang up, and the dance movement criticized her for disguising a lack of talent with exhibitionism. It was time for her to move on, so she applied her considerable skills to work as a courtesan.

It was then that she met and fell in love with a Russian captain and began an intense affair. When he was shot down and blinded in the war, she begged the French government for permission to go to the front to see him. They granted her request on the condition that she spy for them in Germany, and they told her to make her way to the crown prince’s bed.

But Mata Hari, it seems, had other plans. Once in Germany, she made a deal with the Germans to spy on the French — effectively becoming a double agent. 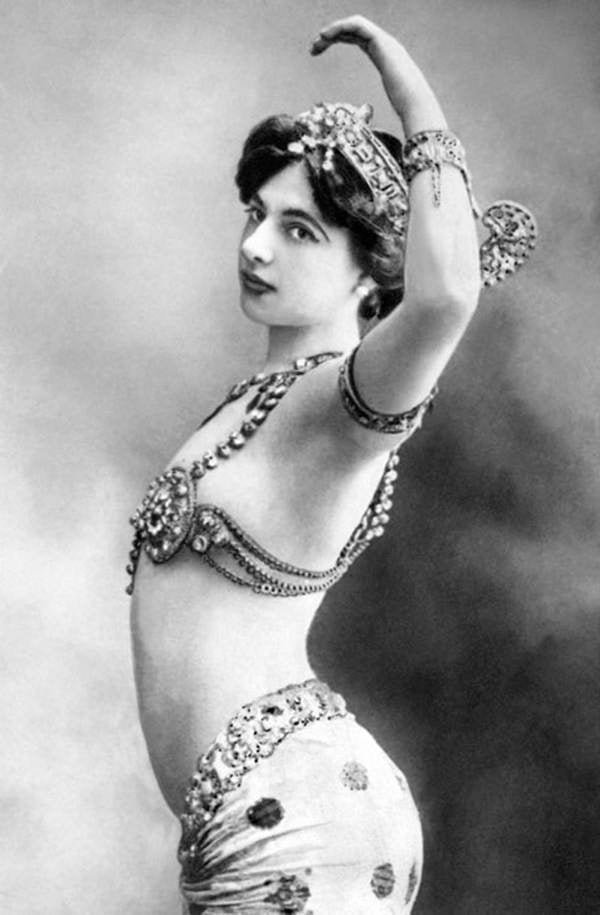 Stuff You Should KnowMata Hari, one of the world’s most famous spies, met a violent end.

In the end, the gig wasn’t worth its rewards: the Germans, tired of receiving only bedroom gossip, grew angry with her, and many think what happened next was no accident.

In January 1917, French intelligence intercepted a German military attache-encoded radio signal to Berlin. The German communication mentioned that they were receiving amazing information from a German spy codenamed H-21. Mata Hari was identified and arrested in a Paris hotel room on Feb. 13, 1917.

She was executed by firing squad on September 15, 1917, for espionage. 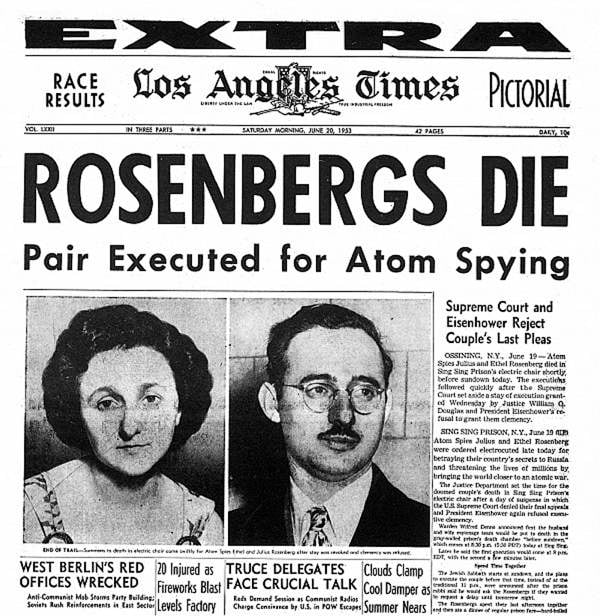 IelmiraThe LA Times reports on the execution of famous spies Julius and Ethel Rosenberg on June 20, 1953.

Married couple Julius and Ethel Rosenberg were American communists who were executed in 1953 for passing nuclear secrets to the Soviet Union. The couple became embroiled in espionage in 1942 when Julius, an engineer-inspector at the Army Signal Corps Engineering Laboratories at Fort Monmouth, was recruited by the KGB.

He was responsible for passing classified reports and designs to the KGB, including a fuze design which was used to shoot down a U-2 in 1960. He then recruited his brother-in-law, Sergeant David Greenglass, who worked at Los Alamos on the Manhattan Project to design a nuclear bomb. Greenglass later admitted to passing on classified information through Julius and Ethel.

The Rosenbergs’ recruits were everywhere, and the USSR received an astonishing volume of information from them, including the plans for the first ever jet fighter and processes for manufacturing weapons-grade uranium.

Things began to fall apart for the Rosenbergs in 1950.

Alarmed by the speed with which the Soviets arrived at their first nuclear test, U.S. officials became suspicious. All eyes turned to the Manhattan Project, where it was discovered that a German physicist working there had sent plans to the Soviets through a courier, Harry Gold. Gold gave up Greenglass, and from there, things unraveled quickly. 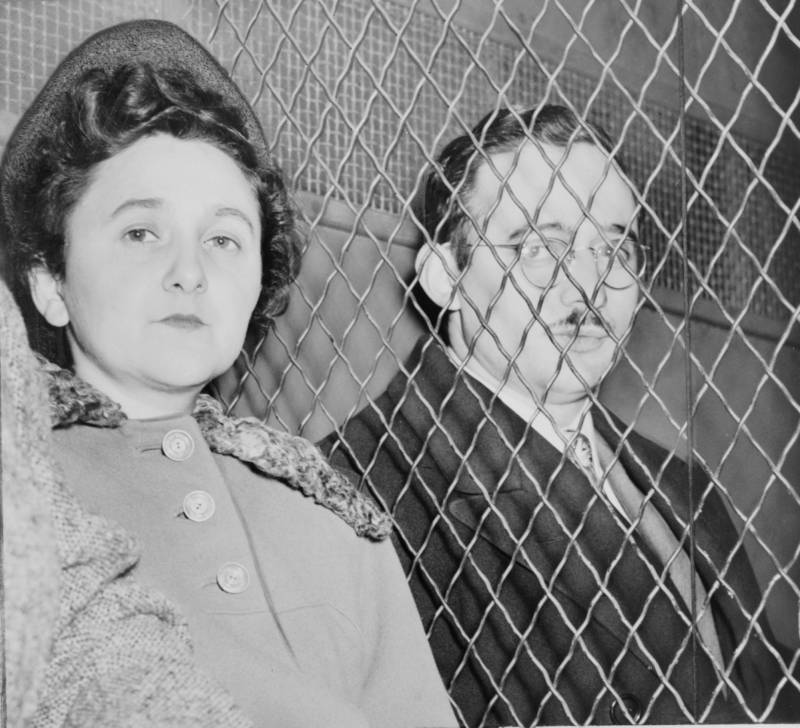 Roger Higgins/Wikimedia CommonsJulius and Ethel Rosenberg, separated by heavy wire screen as they leave U.S. Court House after being found guilty by jury in 1951.

While the degree of Ethel’s involvement was relatively uncertain, prosecutors thought that implicating her would cause her to get Julius to confess. That never happened. The case against them began in 1951, and both were found guilty of conspiracy to commit espionage and executed by electric chair in Sing Sing Prison in 1953.

They were the only two American civilians to be executed for espionage during the entire Cold War.