Thousands Of ‘Penis Fish’ Wash Up On California Beach

"I had no idea what they might be...it went on for two miles. I walked for another half hour and they were scattered everywhere." 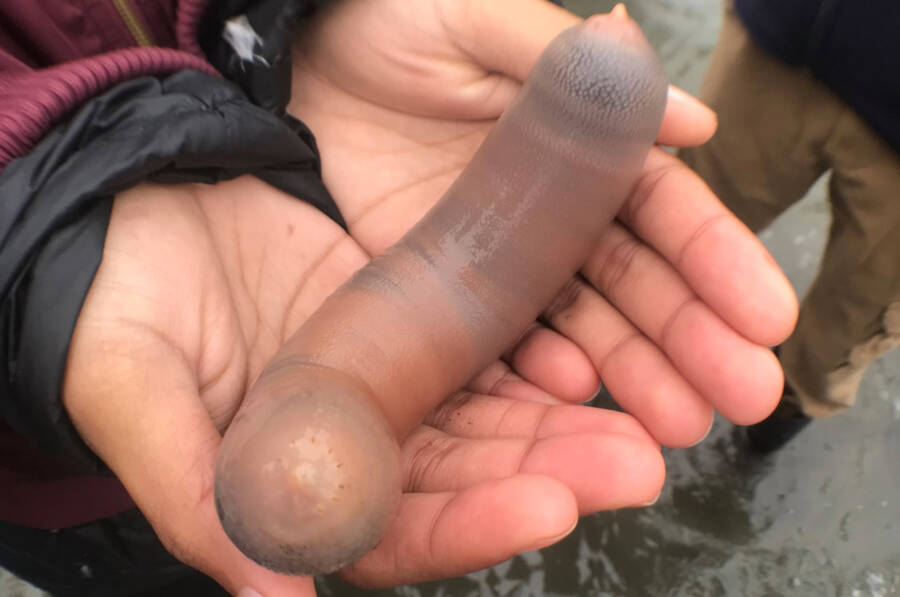 Whether it’s mystifying sea creatures or disturbing amounts of pollutants, astounding objects wash up on beaches around the world time and time again. In the case of California’s Drakes Beach, the latest surprise was thousands upon thousands of what have been described as “pulsing penis fish” — and they indeed look as advertised.

According to Newsweek, the animals in question are officially called fat innkeeper worms (Urechis caupo), an ocean-dwelling spoon worm measuring about one foot long that’s commonly found in the shallow waters along the western coast of North America.

As for why this enormous batch of phallic critters landed on California shores this particular week, one expert believes the recent storm in the region was to blame. Ivan Parr, a biologist at the Western Section of the Wildlife Society, explained that these creatures typically dwell underwater and burrow into the sand — until aggressive weather takes them to shore.

“We’re seeing the risk of building your home out of sand,” Parr told the New York Post. “Strong storms — especially during El Niño years — are perfectly capable of laying siege to the intertidal zone, breaking apart the sediments, and leaving their contents stranded on shore.”

But despite such a logical explanation, locals not familiar with the worm have come up with some understandably outrageous theories.

“I’ve heard my share of imaginative theories from beachcombers,” Parr said, “such as flotsam of a wrecked bratwurst freighter.” 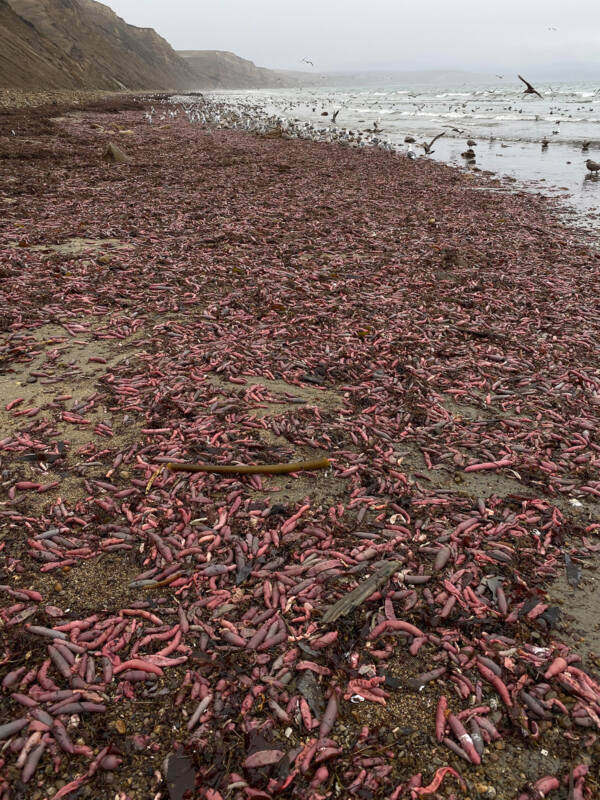 David FordAccording to the photographer behind this image, these worms lined the beach for miles. Some seagulls were eating so many of them “they could barely stand.”

These worms (part of the Urechidae family found around the world) can live up to 25 years, both feeding and navigating their environment with the “spatula-shaped proboscis” in front of their mouths. They feed on bacteria, plankton, and a variety of other small particles. They’ve also been known to prey on flounder, small sharks, rays, gulls, and even otters in addition to the plankton and bacteria they consume.

It essentially pulsates in order to suck in its food and then collects its bounty with its “sticky mucus nets” before swallowing.

Indeed, these creatures have been surviving in their particular niche for some 300 million years.

Footage of a fat innkeeper worm in action.

For California beachgoers, this shocking sighting was likely entirely unexpected. Among the first known to have seen the mass of then-unidentified worms at Drakes Beach, David Ford took a photo on Dec. 6 and shared it with Bay Nature magazine, who then consulted Parr about what exactly this animal was.

“I didn’t expect to see such bizarre creatures on the ground,” said Ford. “I had no idea what they might be…it went on for two miles. I walked for another half hour and they were scattered everywhere.”

“There were seagulls lined up the beach the whole way having eaten so much they could barely stand. A quarter of them looked like they were still alive.”

Ford added that the beach was overwhelmed by a “dead sea-creature smell.”

Despite the smell that Ford described, worms like these creatures are eaten by people in several parts of the world. In East Asia, for example, worms like these are commonly stir-fried and are said to taste something like clams. Nevertheless, in South Korea, these worms are nicknamed gaebul, which translates to “dog genitals.”

But in California, though these creatures aren’t consumed by humans, they do make for quite a spectacle from time to time. As Parr put it, seeing a fat innkeeper worm is a kind of rite of passage for locals, “an almost uniquely California experience.”