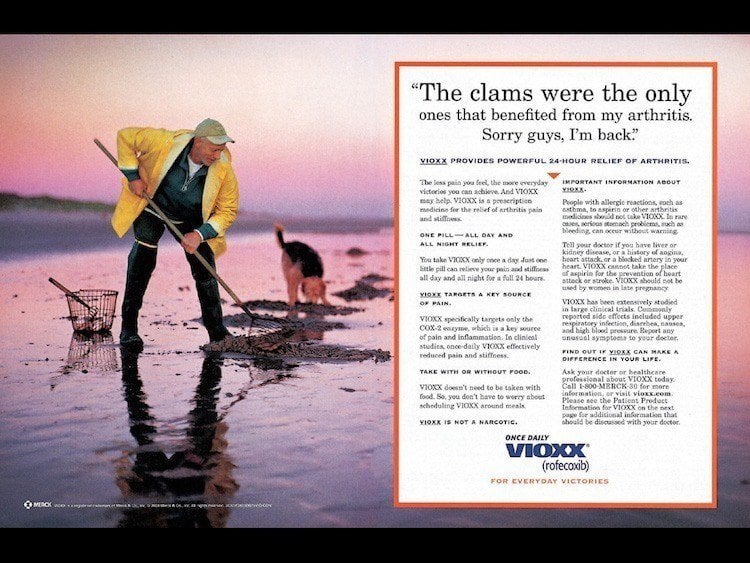 Vioxx, an anti-inflammatory medication intended to treat arthritis, was the subject of one of the largest recalls in history. After it was approved in 1999, it was prescribed to over 20 million people and was one of the most widely prescribed drugs of 2003. The following year, it was recalled.

While original clinical trials showed no increased risk of heart attack or stroke, later studies revealed a large number of heart attacks associated with the drug. The dangers of Vioxx were made known to the FDA and the drug’s manufacturer, Merck, in 2000.

In 2001, a cardiologist at the Cleveland Clinic, Dr. Deepak L Bhatt, proposed to Merck that Vioxx be studied in patients with severe chest pain in 2001. The company declined, saying that, that kind of study would not reflect the typical Vioxx user.

However, what’s more plausible is that Merck was simply more worried about sales. In 2003 alone, Vioxx brought in $2.5 billion. So, instead of letting troubling studies lead to a recall or even any further research, a small warning was added to the box in 2002.

Eventually, however, trials were conducted to test the drug’s long-term effects. But that trial couldn’t even be completed because of the increased risk of heart attack and stroke among participants.

In revealing internal memos that were eventually uncovered, one of the FDA’s own scientists, Dr. David Graham, estimated that Vioxx had been associated with more than 27,000 heart attacks or deaths linked to cardiac problems.

Next, check out this staggering big pharma spending infographic. Then, learn about the heroin vaccine that could save quadrillions in healthcare costs.

Callie Stewart
Callie Stewart is a writer, graphic designer, and photographer living in New York City. She is a big fan of anthropology, music, art, the written word, a good glass of wine and The Jerk.
You might also like
×
Follow ati On
Join The All That's Interesting Weekly Dispatch
Like Follow
Posting....