Determined to alleviate his father's arthritis, Felix Hoffmann made a pain reliever that was safe for everyday use. But then he synthesized something far more potent. 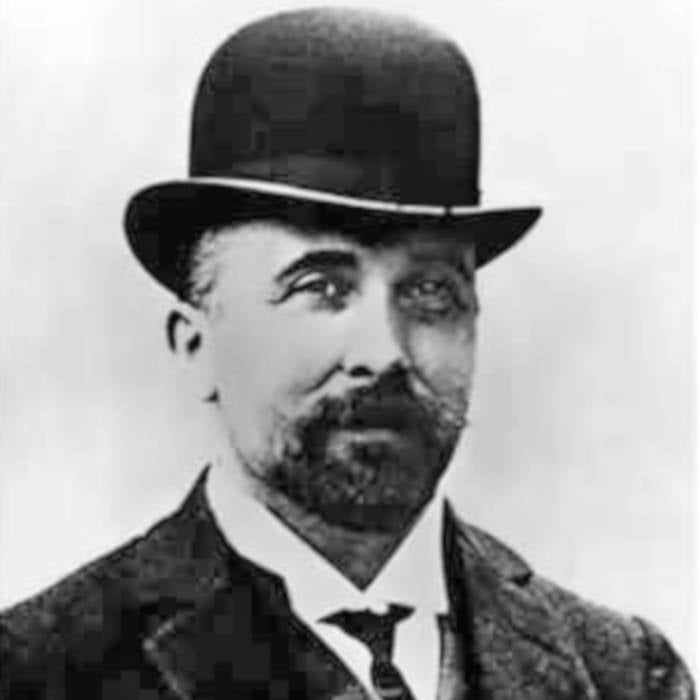 Felix Hoffmann was born into an industrial family in 1868. His father was a manufacturer in Ludwigsburg, Germany, and it was here that a young Hoffman developed a liking for manufacturing and chemical processes.

Hoffmann’s prowess in chemistry and pharmacology was quickly noticed by his professor, Adolf von Baeyer. Baeyer, who went on to earn the Nobel Prize in chemistry in 1905 for his work on synthesizing dyes, suggested that Hoffmann work at the German pharmaceutical and dye giant, Bayer.

In 1894 Hoffmann did just that when he joined the newly established pharmaceutical research department at the Bayer Company in Elberfeld, Germany.

Hoffman was of a class of researchers who wanted to create new substances that could be used as medicines and not simply recreate the active ingredients from natural products. Felix Hoffman, as the legend goes, was also motivated by a desire to alleviate his father’s crippling pain.

The Invention Of Aspirin

The senior Hoffman suffered from debilitating arthritis. It was difficult for him to move and painkillers at the time were woefully inadequate or made the patient feel worse via dangerous side-effects. 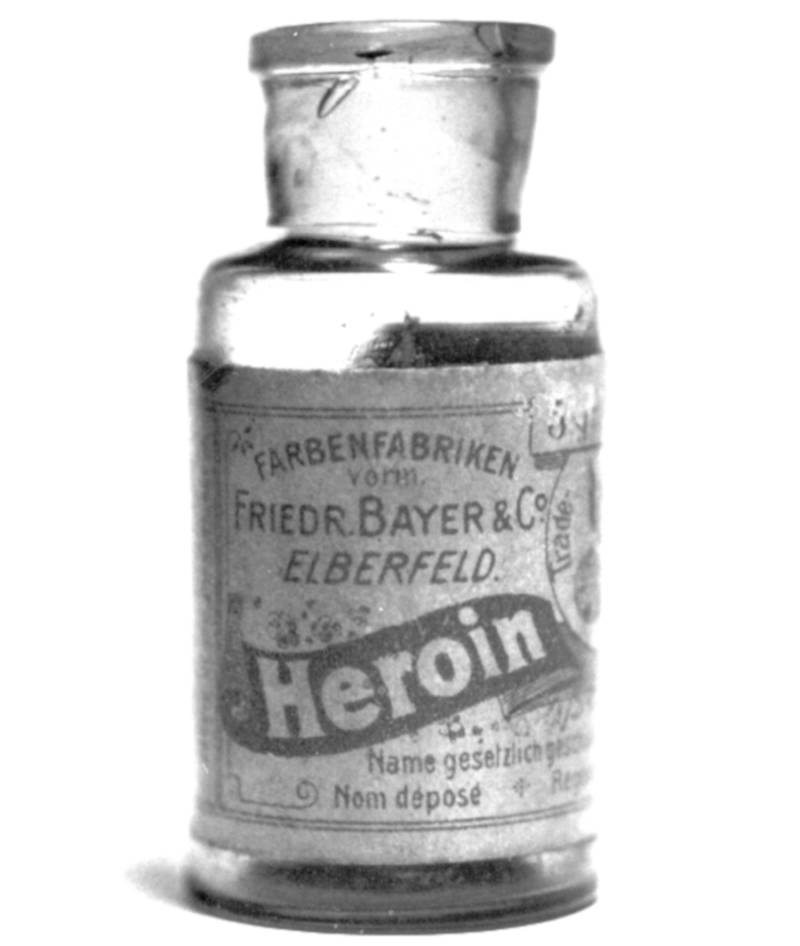 Wikimedia Commons A bottle of heroin before it was a street drug.

Hoffmann’s research lead him to salicylic acid, a substance widely found in willow tree bark. By the 1830s, scientists had already isolated salicylic acid in a lab to create a pure form of it. In 1859, chemists created salicylic acid synthetically. But unfortunately, the substance caused stomach pains that made it difficult for everyday use.

But Felix Hoffmann found a way to make this compound safe for common ingestion. Using acetic acid, which is the active chemical in vinegar, Hoffman was able to create a chemically pure and stable form of salicylic acid on Aug. 10, 1897.

At first, the scientific community was dubious of Hoffmann’s discovery, but once a fellow chemist verified his findings, human trials began. Heinrich Dreser, the head of Bayer’s pharmaceutical laboratory, tested this new substance on himself. The chemical lowered pain levels and reduced fever without the side effects of an upset stomach that had come with salicylic acid before.

Acetylsalicylic acid was given the name Aspirin, from the “A” for acetyl and the “spirin” from Spirea, the name for the shrubs in which an alternative source of salicylic acid can be found. It’s been speculated that Hoffman and Dreser were aided by Felix Hoffman’s supervisor, Arthur Eichengrün, in the invention of Aspirin but because Eichengrün was Jewish, he was excluded from the success.

Indeed, Bayer was one of those major brands which would eventually support Nazi Germany. 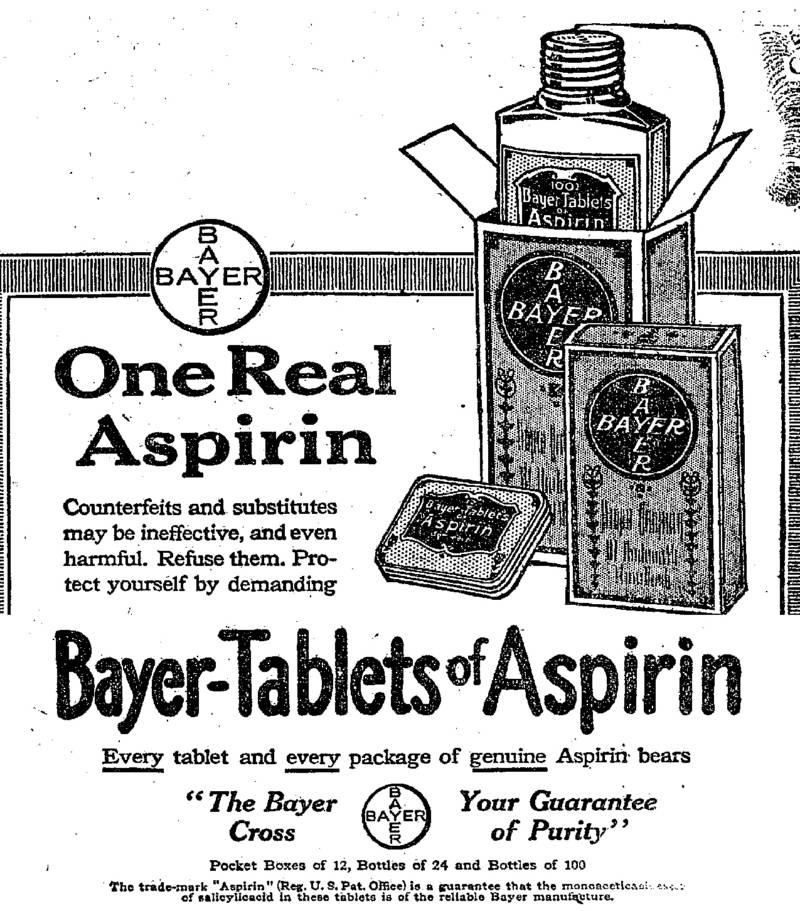 Wikimedia Commons A Bayer aspirin ad from The New York Times in 1917.

Bayer subsequently marketed Aspirin as a bottled powder as early as 1899. Though Bayer applied for a German patent on the product, this was rejected, as acetylsalicylic acid had been synthesized earlier. Unlike what Hoffmann had created, these earlier isolations had been unable to produce acetylsalicylic acid in a pure, stable form that could be used on a daily basis.

Nonetheless, sales took off and made Bayer a household name around the world. Hoffmann’s father had his pain relief without the toxicity of pure salicylic acid and Hoffmann became the head of Bayer’s pharmaceutical division shortly after Aspirin became a bestseller.

Heroin, however, has a different origin story behind it.

Meanwhile, Dreser had researched the painkilling properties of codeine, a compound which comes from opium, and is a weaker form of morphine. Dreser wanted to see how codeine affected breathing and asked Hoffman to perform the same process he had on salicylic acid on morphine in the hopes of creating codeine.

Instead of codeine, though, when Felix Hoffman acetylated morphine, the result was heroin.

Heroin was not patentable, but not because of its extreme addictiveness, and rather because it had already been discovered in the 1870s. Researchers did not yet realize the dangers of heroin and so it was widely sold by Bayer to suppress coughs, to relieve the pain of childbirth and of serious war injuries, to anesthetize patients, and to control certain mental disorders. 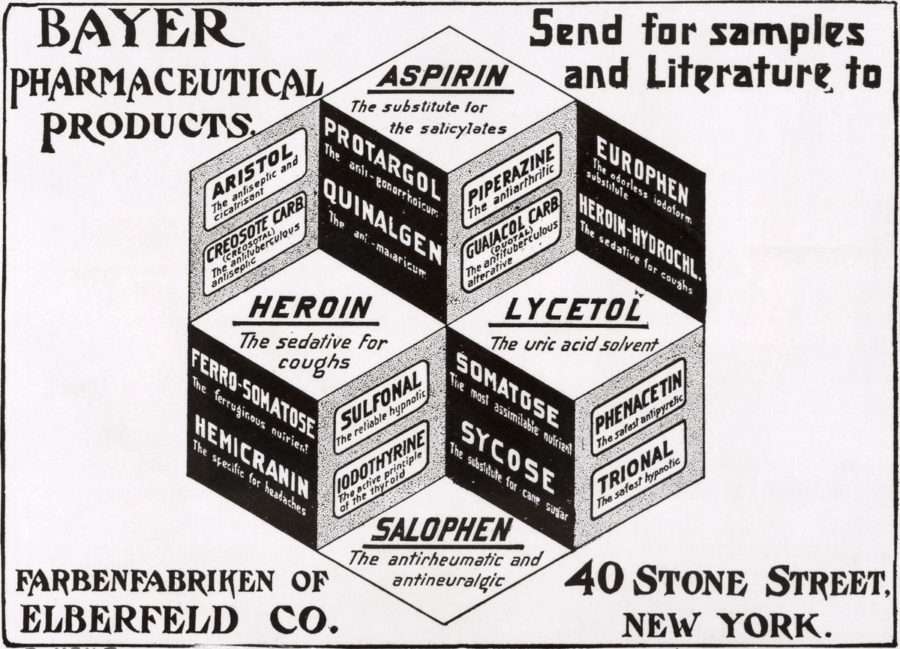 Felix Hoffmann retired in 1928 and died a rich man, though a lonely one, in Switzerland in 1946.

But nearly 125 years later, Hoffmann’s invention is still in use. Aspirin has been used for pain relief and reducing fevers, and also for heart ailments and recovery from heart surgery. Aspirin may even reduce the chance of blood clots and save lives by preventing clogged arteries.

Aspirin has likely saved millions of lives. In the United States alone, at least 15 million aspirin tablets per year are estimated to be ingested. As of 2015, one survey suggested that as many as one-fourth of heart patients in the United States self-medicated with low-dose aspirin to prevent cardiovascular disease. 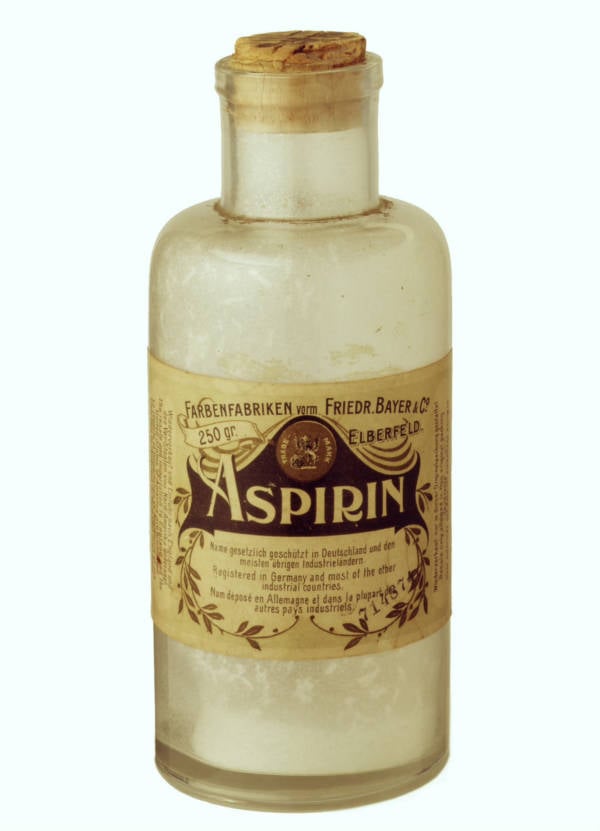 Heroin, on the other hand, has become something of an epidemic. In the United States in 2017 alone, some 15,900 people died due to a heroin overdose.

But perhaps the lives saved by Aspirin can someday balance out the death and destruction caused by heroin.

After this look at Felix Hoffmann, read more about the history of heroin. Then, check out some more illegal drugs that were once prescribed as miracle cures.