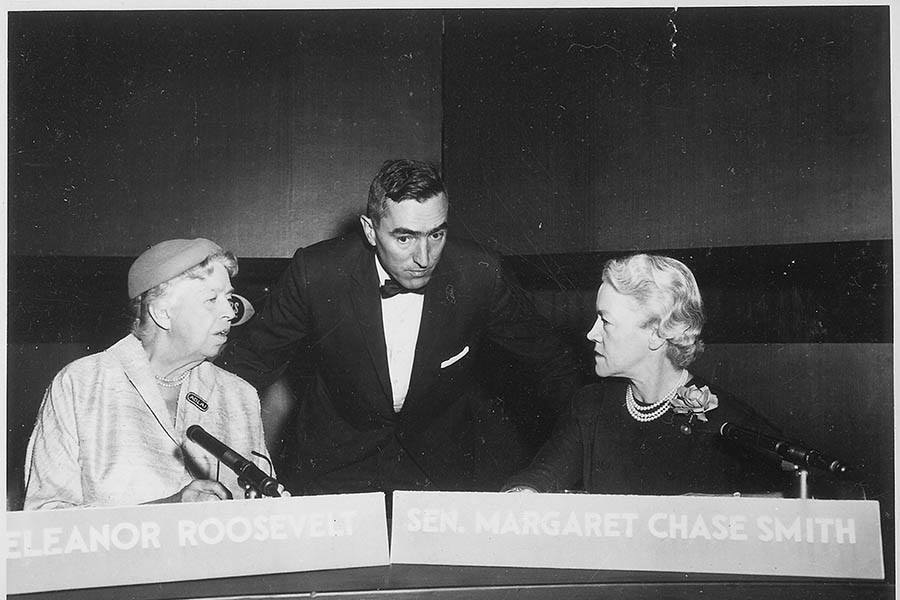 Chase Smith initially ran for the House of Representatives after her husband, who had been serving for several years, suffered a heart attack and therefore could not run for another term himself. At his urging, Chase Smith ran on his established political platform. When he died, a special election was held to fill his seat. With no Democratic opponent, she won her husband’s seat without contest.

Throughout her time in office, Chase Smith became interested primarily in national security and military affairs, becoming the first and only civilian woman to sail on a U.S. Navy ship during WWII.

She ran for president on the Republican ticket in 1964 and was the first woman to be nominated by a major party’s convention. In spite of her experience and her own protestation that she “[hadn’t seen the age played up in the case of the men candidates,” pundits spent much time speculating whether she was menopausal, and Chase Smith lost every primary. In one of the last interviews President John F. Kennedy ever gave, he called her “formidable” — though wondered aloud about the appropriateness of referring to “a fine lady” as such.

Still, those who worked closely with her saw the challenges she faced as a woman in a largely male-dominated environment.

Janann Sherman, a Chase Smith biographer, said, “She was always having to walk that tightrope between being strong enough and tough enough to be commander in chief, to run a country, but still feminine enough and ladylike enough … because being feminine was absolutely essential. And so she tried to balance it the best way she knew how.”

She died in her native Skowhegan, Maine at age 97 after suffering a stroke. Her ashes were placed in a special wing of the town’s Margaret Chase Smith Library.

When she ran for president, Chase Smith knew her chances of winning were slim, but she still persisted. “I have few illusions and no money, but I’m staying for the finish,” Chase Smith said. “When people keep telling you, you can’t do a thing, you kind of like to try.”