This enormous Savannah cat measures 18.83 inches tall to its shoulder — and is often mistaken for a puma. 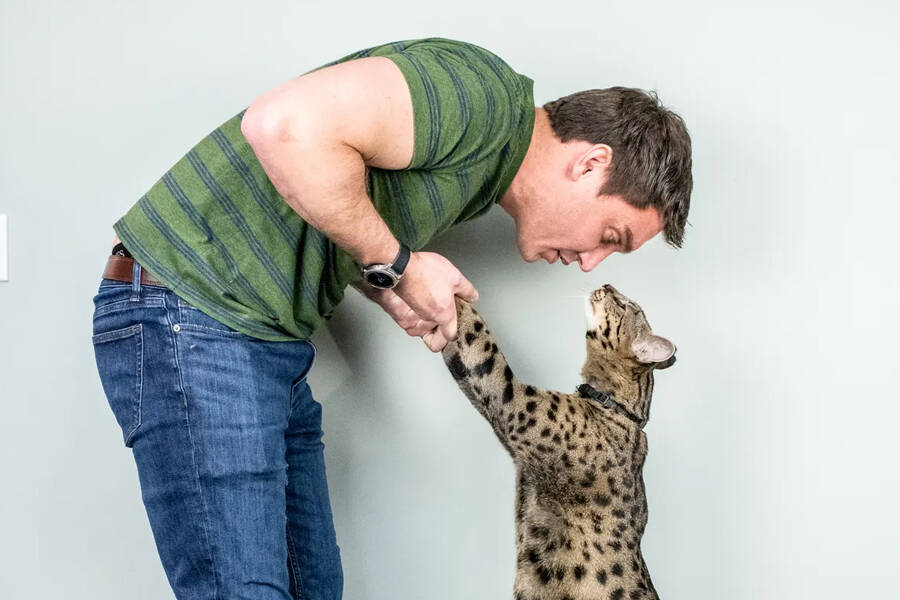 At 18.83 inches tall from foot to shoulder, Fenrir “is a monster,” said owner Dr. William Powers. “He’s a really good boy. You can hold him like a baby.” 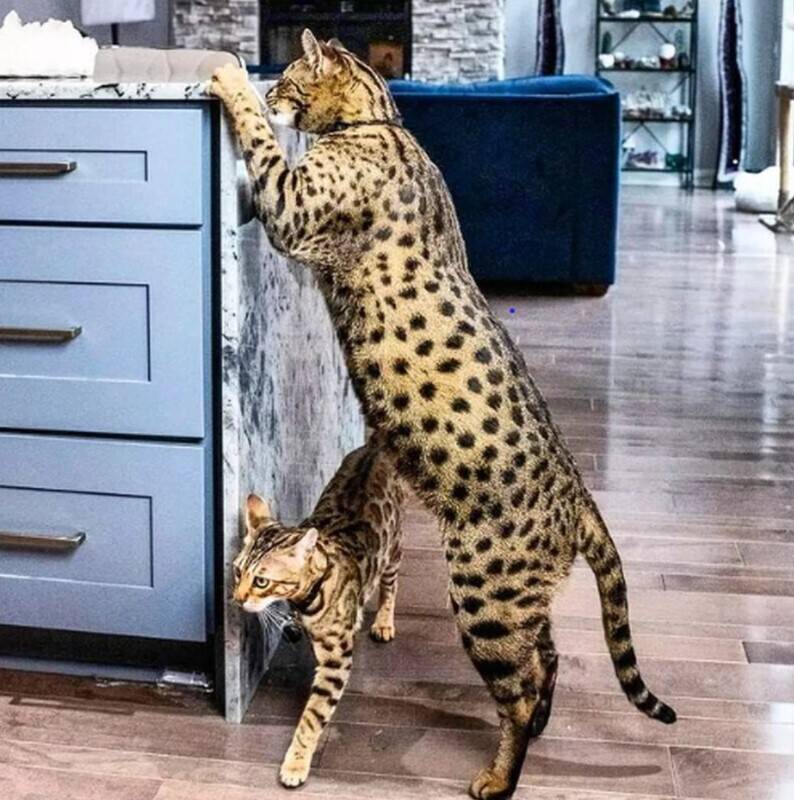 Guinness World RecordsFenrir has been mistaken for an ocelot on more than one occasion.

According to ClickOnDetroit, Powers is no stranger to owning world record-winning cats.

One of Fenrir’s brothers, Arcturus, was even taller than Fenrir at 19.05 inches. Another cat, Cygnus, held the record for having the world’s longest tail on a domestic cat, measuring 17.58 inches. That record is currently held by Powers’ Maine Coon named Altair, whose tail measures an incredible 16.07 inches.

Unfortunately, both Arcturus and Cygnus were killed, along with a third cat named Sirius, in a house fire in 2017, reported MLive. Powers nearly lost his own life trying to save the cats.

“I did everything I could. I tried to put it out. I called 9-1-1. I searched the house for them for as long as I could,” he recalled. “I was in a room so filled of smoke that I could not see anymore. I was feeling around for them. I passed out, I hit the ground. I realized when I woke back up if I didn’t get out, I was gonna die … I was heartbroken.”

The sudden loss of his beloved cats and his home took a toll on the doctor. As he explained to MLive, he stopped working for a time after the fire, and his marriage dissolved around the same time. 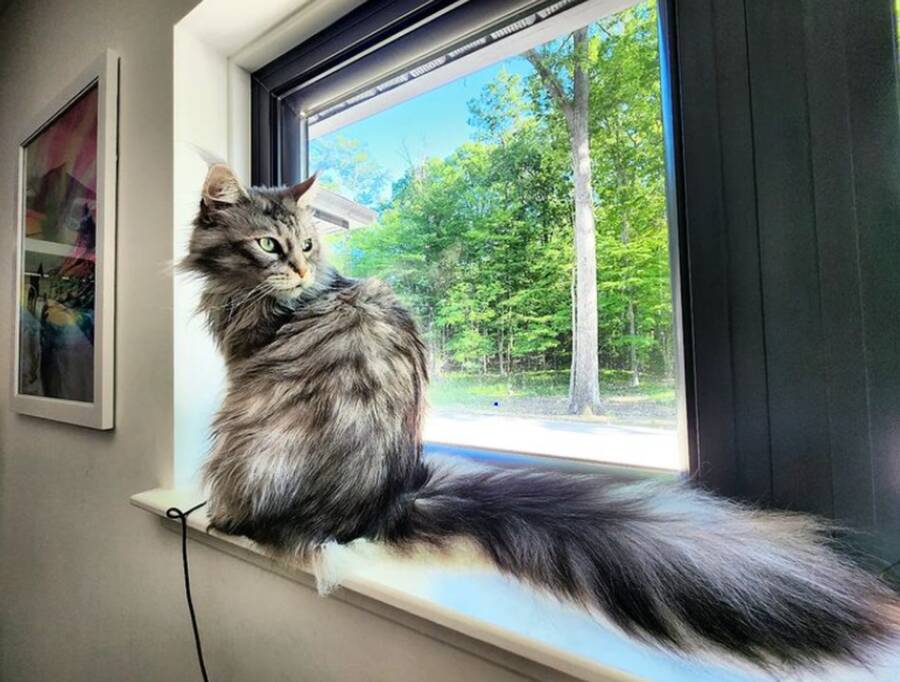 Dr. Will PowersAltair Powers and his 16.07-inch tail, currently the record holder for the longest tail on a domestic cat.

“I don’t really have words to describe what that was like,” he told MLive. “But I wasn’t well for a long time. I didn’t work for a long time, but eventually I started to get better and I missed having cats. Now I have six. They make my life well. They made me get well. They gave me a reason to climb out of that hole.”

Two years after the fire, Arcturus’ parents, Dream and Myst, suddenly had another, unexpected litter and gave birth to two males, Fenrir and Corvus, both of whom Powers adopted.

The cats haven’t just helped to make Powers’ life better, either — they also help his patients.

Powers is a Board-certified family physician and HIV specialist who specializes in treating members of the LGBTQ+ community, and Fenrir spends much of his time at the hospital helping to calm and comfort HIV patients as a therapy cat. 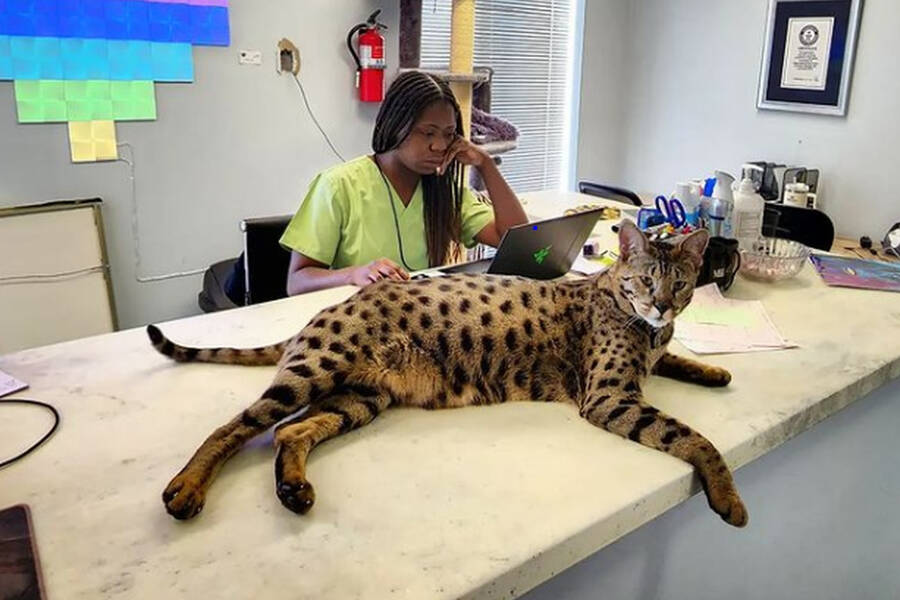 Dr. Will PowersFenrir hanging out at Powers’ clinic.

“He wanders around the office receiving pets from people, snoozing on exam room tables, and begging for treats,” Powers told Guinness. “He will see patients with me, following me room to room until he starts to tire out, then he’ll usually stay in one room and curl up on a chair somewhere and snooze until lunchtime. He never misses lunchtime ever!”

Sometimes, Powers explained, patients will be so taken aback by Fenrir’s size that they think he might be a small panther, puma, or ocelot.

“This can actually scare people and they back away from him in fear,” Powers said. “But once I explain that he’s a therapy cat and very friendly, people are thrilled to walk up to him.”

A former president of the Ferndale Cat Shelter, Powers uses his record-holding cats as a way to bring awareness to the adoption of shelter cats — and he encouraged other owners of exotic pets to seek out their own world records and use that fame to help out other shelters.

“For someone so obsessed with their cats to have not one, not two, but four Guinness World Records title-holding animals in one lifetime is a bit surreal, isn’t it?” Powers told Guinness.

“It almost feels like it was something destined to happen, and then even after our disaster, the universe tried to make at least that little bit of it right again.”

After reading about this record-holding feline, meet Félicette, the first cat to become an astronaut. Then, read about the Chinese pet owner who paid $35,000 to clone his dead cat.