French scientists launched Félicette into space in October 1963 in hopes of catching up to the US and the USSR in the Space Race. 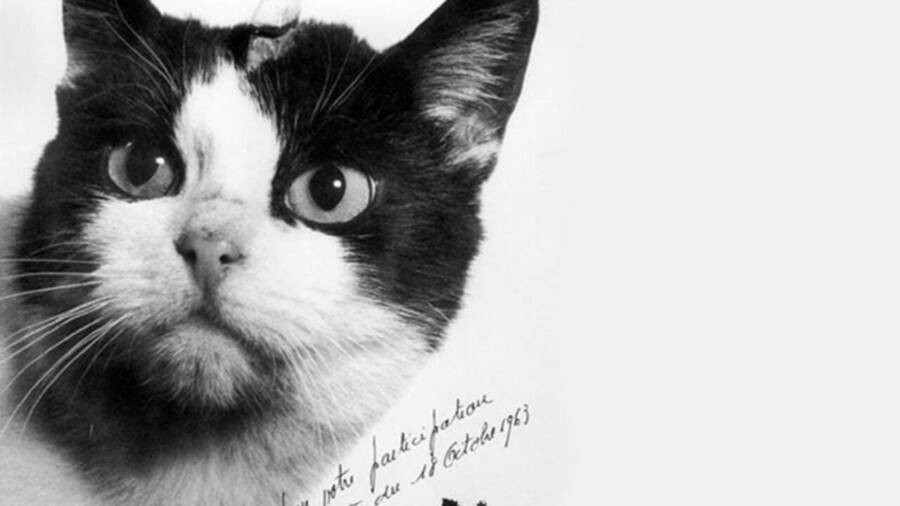 Wikimedia CommonsThe note “from” Félicette reads: “Thank you for your participation in my success of 18 October 1963.”

Félicette didn’t seem like a typical astronaut. She weighed just five and a half pounds. She’d spent most of her life on the streets of Paris. And Félicette was a cat, one of 14 trained by French scientists for space flight.

In 1963, she went where no feline had gone before. Chosen for her calm demeanor and low weight, Félicette was strapped into a rocket in October of that year. She spent 15 minutes on a dizzying flight to the stars before returning safely to earth.

Her legacy, however, has been largely forgotten. While other space animals like Laika the dog and Ham the chimp have been celebrated, Félicette became a footnote of history.

This is the story of the only cat to go to space.

By the 1960s, the “Space Race” had started to heat up. But though the Soviet Union and the United States were making a number of exciting advancements, the French felt that their own space program was lacking.

They’d sent rats up in rockets. But that wasn’t quite impressive as the Soviet dog Laika, who went to space in 1957, or the American chimp Ham who followed her up in 1961.

What’s more, rats didn’t offer scientists many insights. And the entire goal of sending animals up to space was to understand how space flight could impact human physiology. So French scientists turned their attention to another animal: cats.

“The cat was one of the animals widely used for studies of neurophysiology at the time,” explained Michel Viso, a former veterinarian and the head of exobiology at France’s National Center for Space Studies.

In other words, it made sense to use an animal that scientists already understood well. So, in pursuit of their new goal, scientists at the Centre d’Enseignement et de Recherches de Médecine Aéronautique (CERMA) acquired 14 cats, all female, and started to put them through “astronaut” training.

They called one of the cats “C 341.” Later, the calm tuxedo feline would be known as Félicette.

Félicette and the other 13 cats went through a rigorous screening process to see how they’d react to space flight. With electrodes in their brains, they endured confinement, loud rocket noises, and even stomach-churning centrifuge sessions for several months. 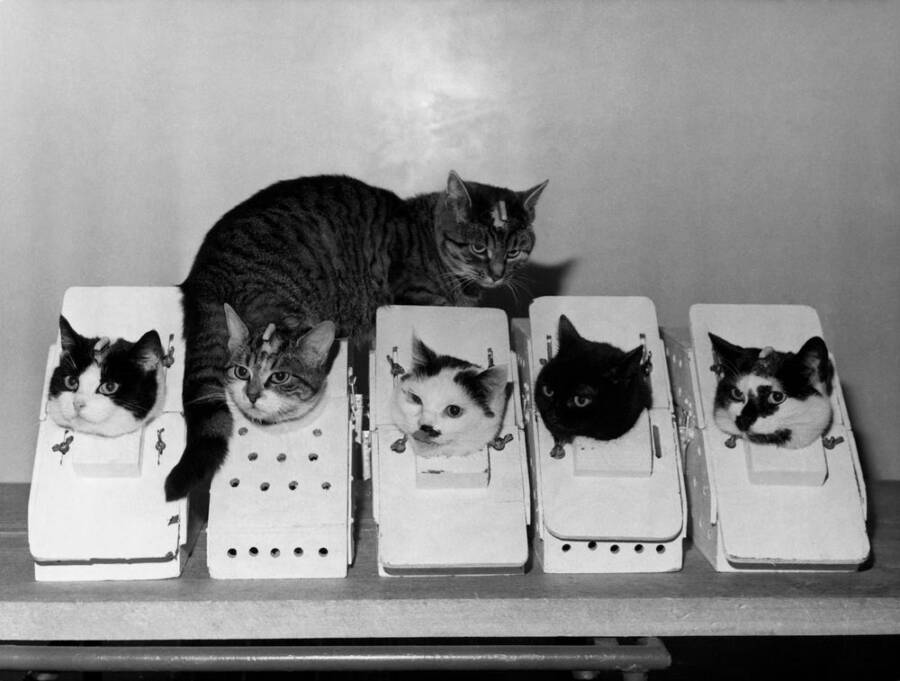 NASA ArchivesSeveral of the cats “trained” to go to space, including Félicette at far left.

Of all the cats, Félicette emerged as one of six candidates to go to space. Scientists picked her because she’d maintained her weight — other cats in the program had gained weight — and because she had a calm, even-keel demeanor.

“Félicette was the right cat for the job,” one of the CERMA scientists later said. “Any panic reaction on her part would have disqualified her from the program since it would have made her brain signals impossible to read.”

In the end, Félicette was tapped for the final mission. On Oct. 18, 1963, in Hammaguir, Algeria, she was loaded into a Véronique AG1 rocket and launched into space at 8:09 a.m. sharp. 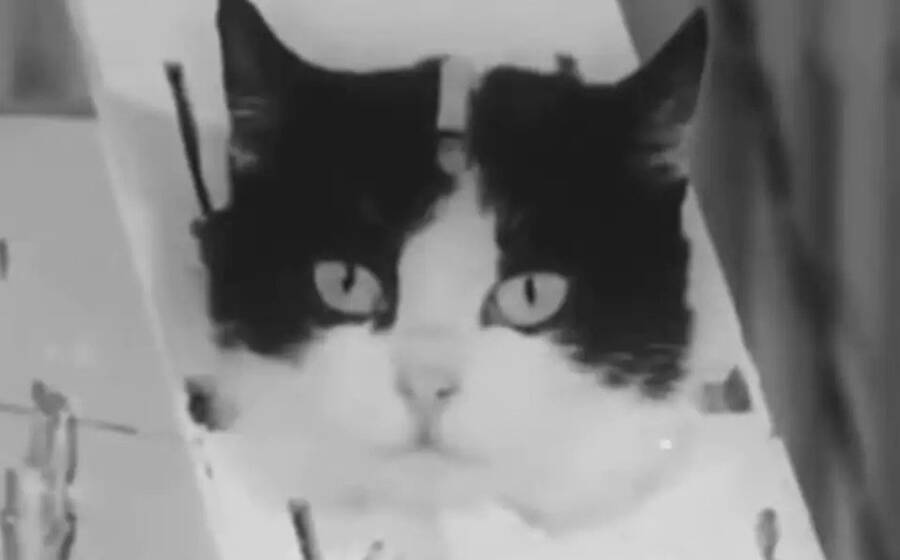 “The rocket climbed very high, nearly 157 km,” explained Viso. After 15 minutes of soaring through the stars, she returned to earth a French hero.

The media fondly nicknamed the “astrocat” Félix, after the popular cartoon. Because Félicette was actually female, they later amended her name to the feminine form.

But her days, sadly, were numbered.

The Legacy Of The First Cat In Space

Félicette’s moment of glory didn’t last long. Soon after she returned to earth, scientists euthanized her so they could study her brain.

From then on, Félicette’s impressive legacy started to fade away. But why? Why was Félicette forgotten whereas animals like Ham the chimp and Laika the dog are remembered and celebrated?

“I think it may be a matter of how history played out,” said Robert Pearlman, space historian and editor of the space history site collectSPACE.

“The effort that led to launching humans into space — and then ultimately, to the moon — was the space race between the United States and the Russians.”

Because the French never launched humans into space — they later partnered with the European Space Agency — their early accomplishments dimmed next to Russian and American ones. As such, Félicette’s story was slowly forgotten.

Even the French forgot about her. When a series of stamps appeared honoring Félicette’s space flight, they accidentally portrayed her as a male cat named Félix, just like the media had initially.

But that started to change in 2017. Then, a London-based man named Matthew Serge Guy organized a Kickstarter campaign to get a bronze memorial in “Astrocat’s” honor.

“Over the last 54 years, the story of the first and only cat to go to space has been largely forgotten. She deserves a proper memorial,” he wrote on the page.

“Although other animals in space — such as Laika the dog and Ham the chimpanzee — are well-known within popular culture and have lasting memorials, very few people are aware that a cat went to space at all. Now it’s time for ‘The Astrocat’ to get the memorial she rightly deserves.”

Guy’s campaign was a success. He raised more than $57,000 to create a statue for Félicette, which is now installed at the International Space University in Strasbourg, France. 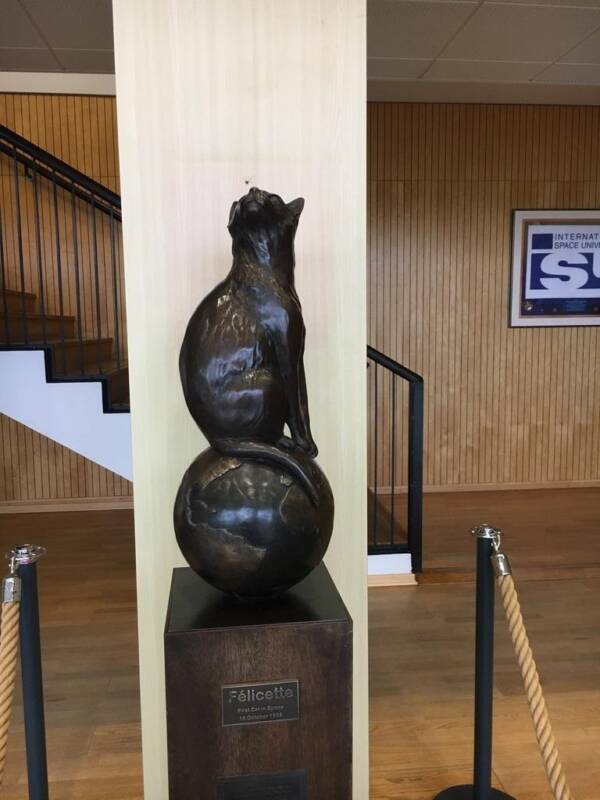 Subsequently, the Université Toulouse III announced that they would name their upcoming observatory after Félicette. The observatory is set to open in 2023 and has “Astrocat” as its logo.

As such, Félicette is finally getting the recognition she deserves. Her contribution to space travel may be small — and it was certainly involuntary — but it was a contribution nonetheless.

Today’s astronauts and space travelers follow in her pawprints.

Now that you’ve read the incredible true story of Félicette, read all about Mayor Stubbs, the cat who held one Alaskan town’s highest office for more than 20 years. Then, check out these incredible photos of Queen frontman Freddie Mercury and his cats.