The Queen frontman was known to call his 10 cats while on the road — and even reportedly left them everything in his will. 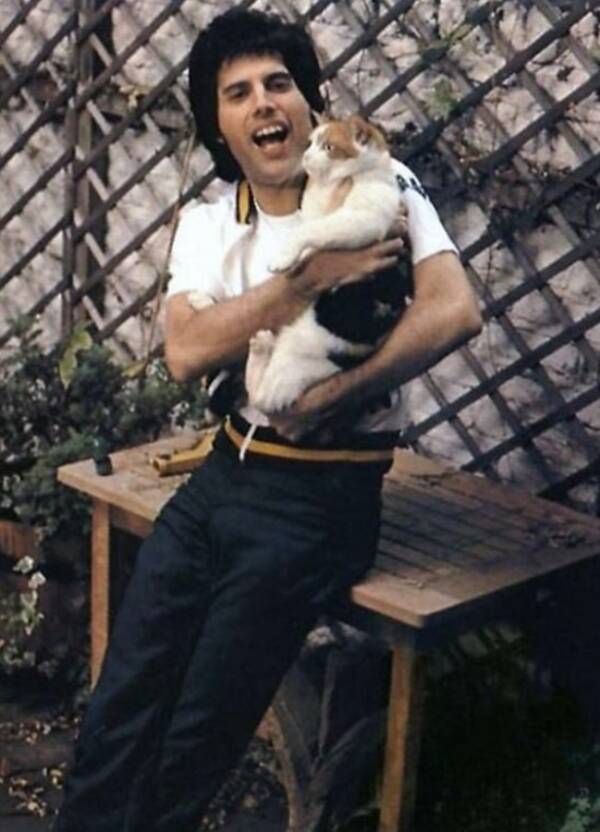 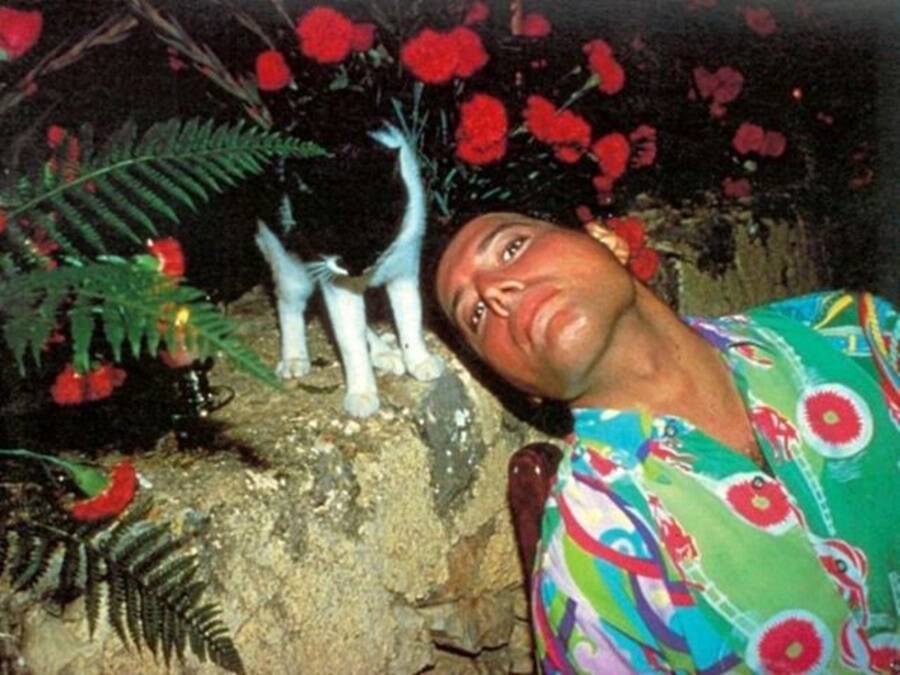 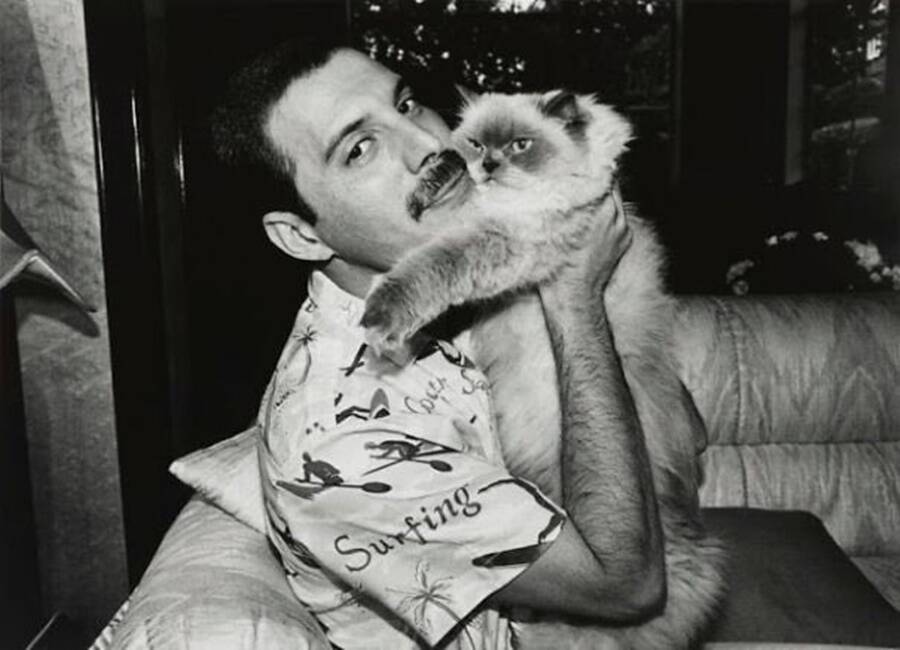 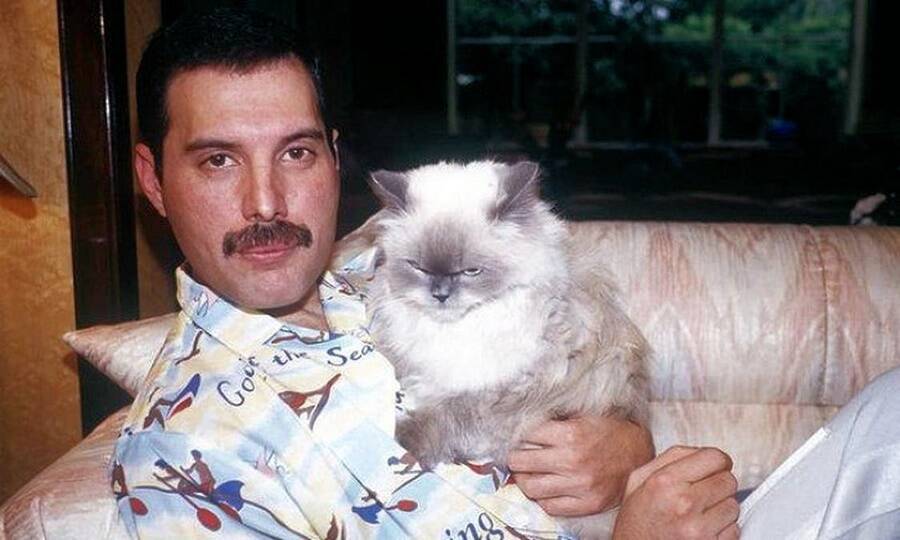 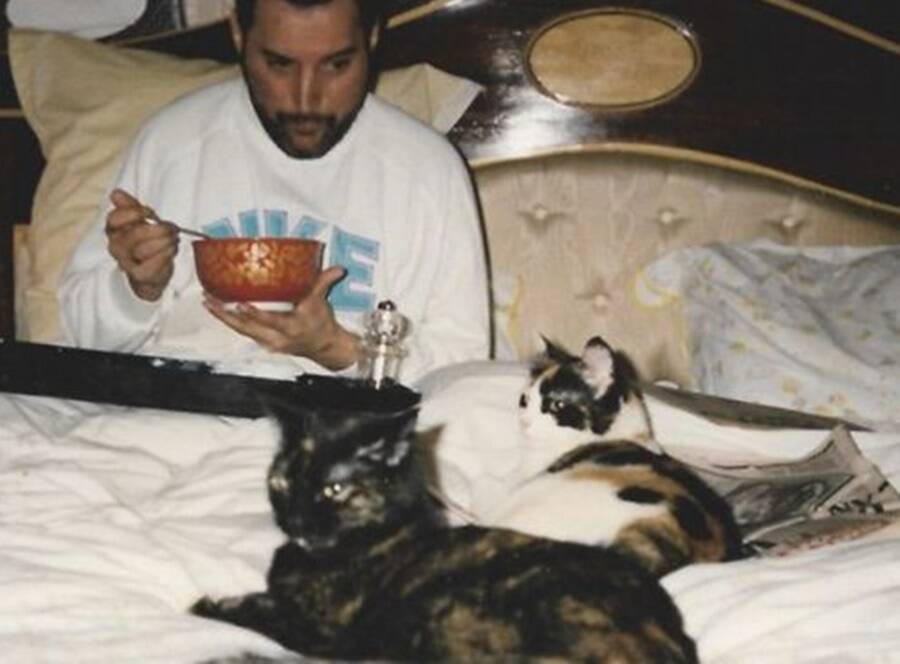 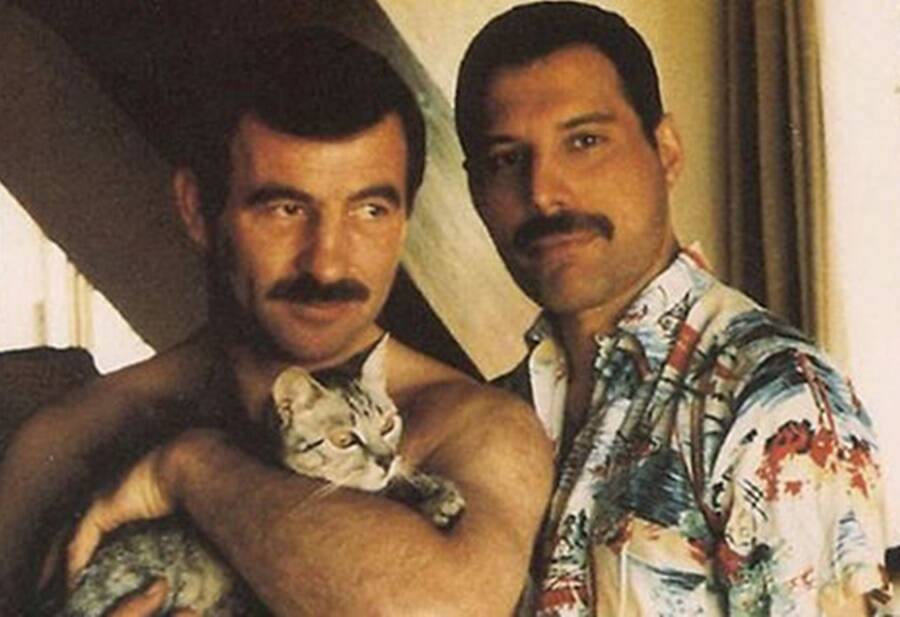 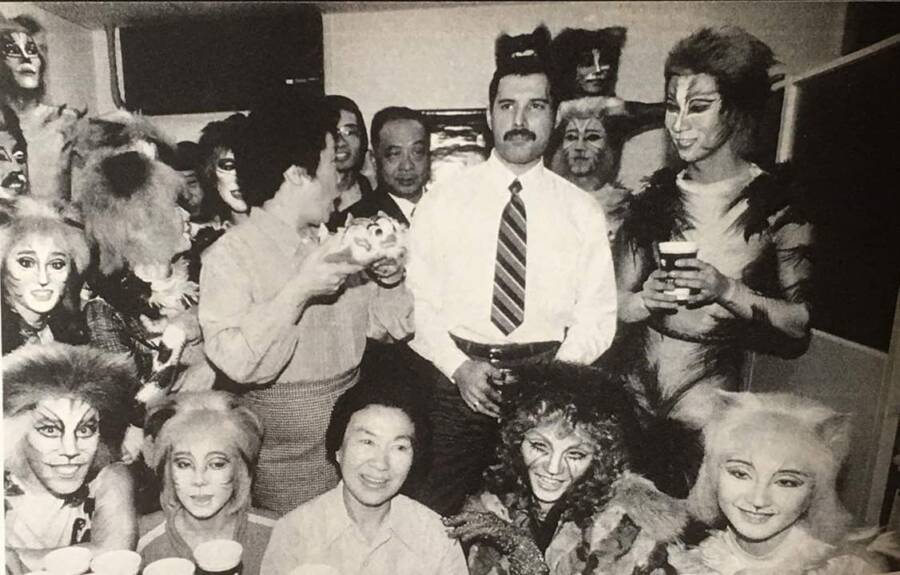 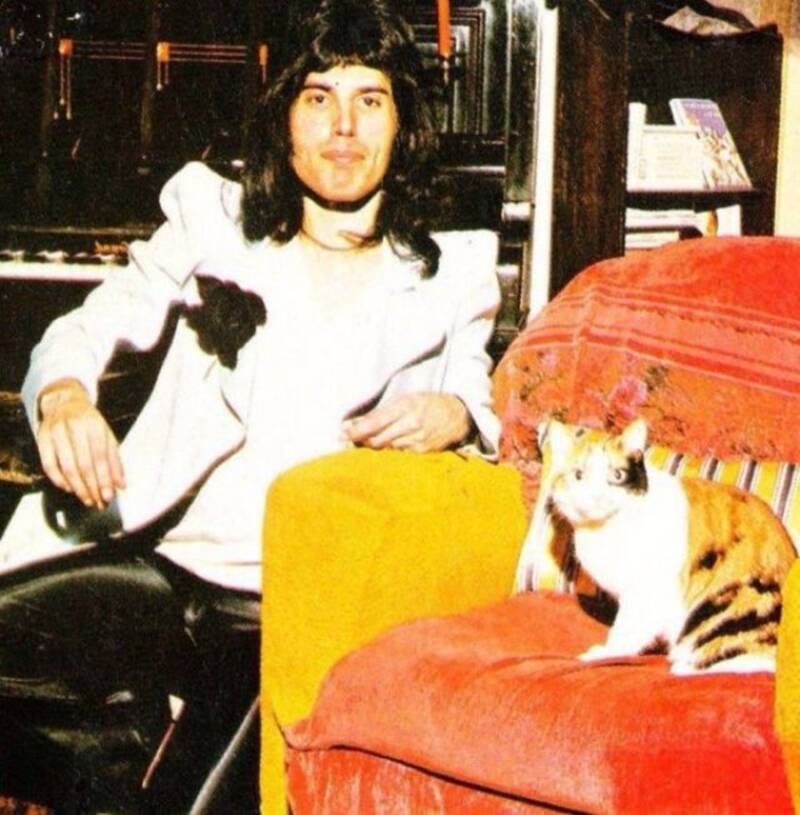 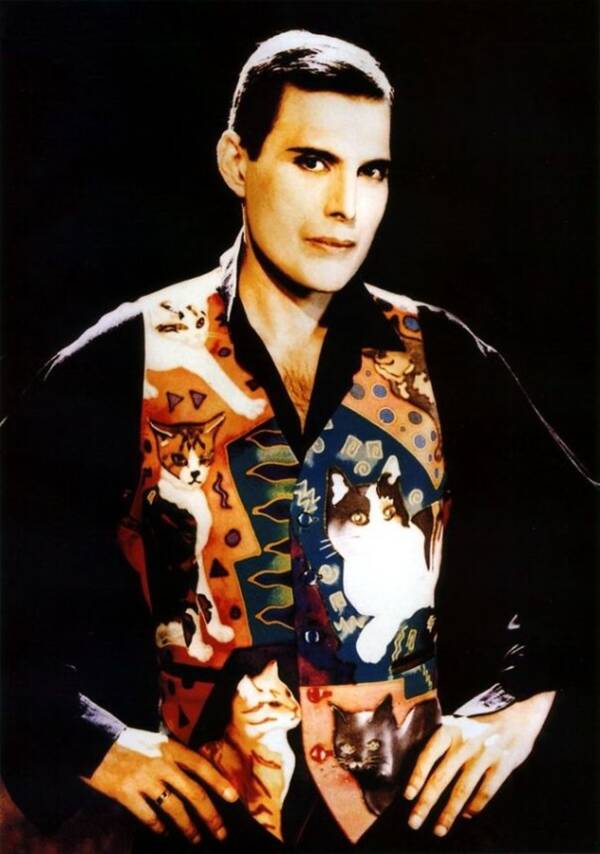 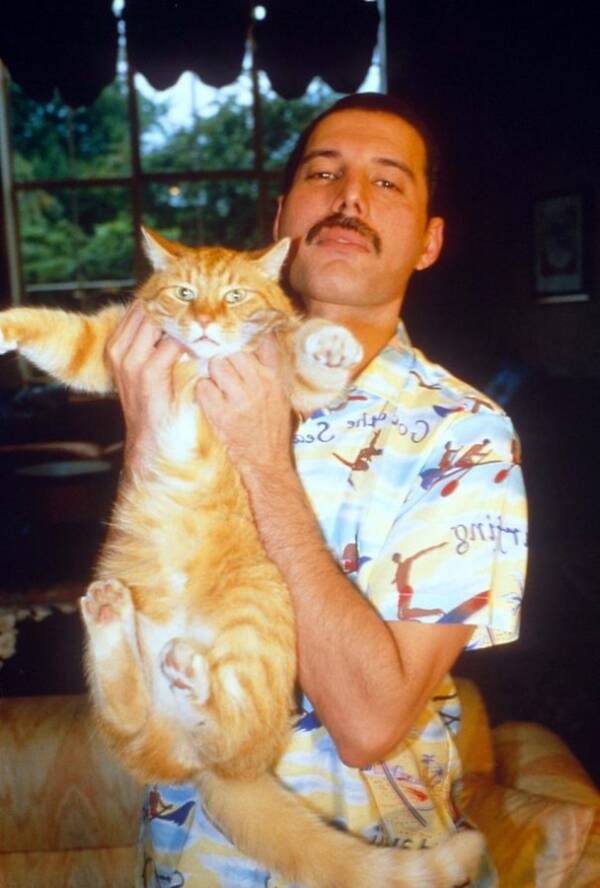 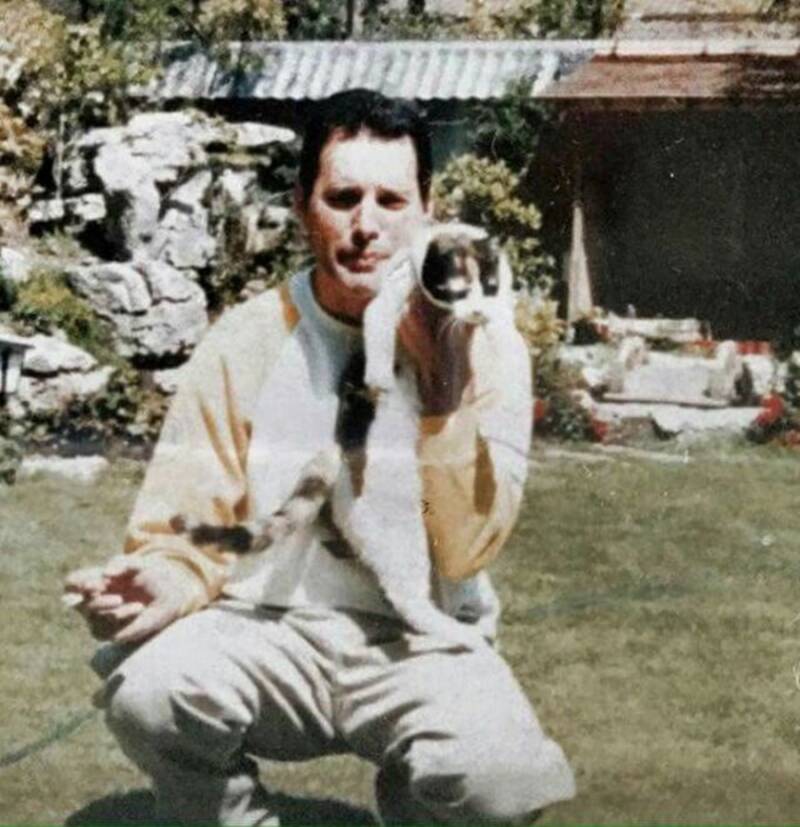 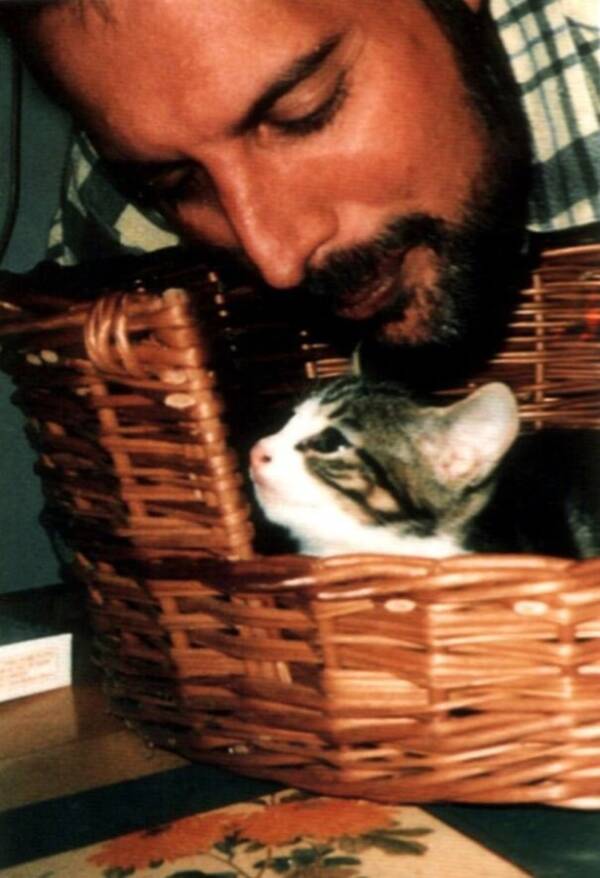 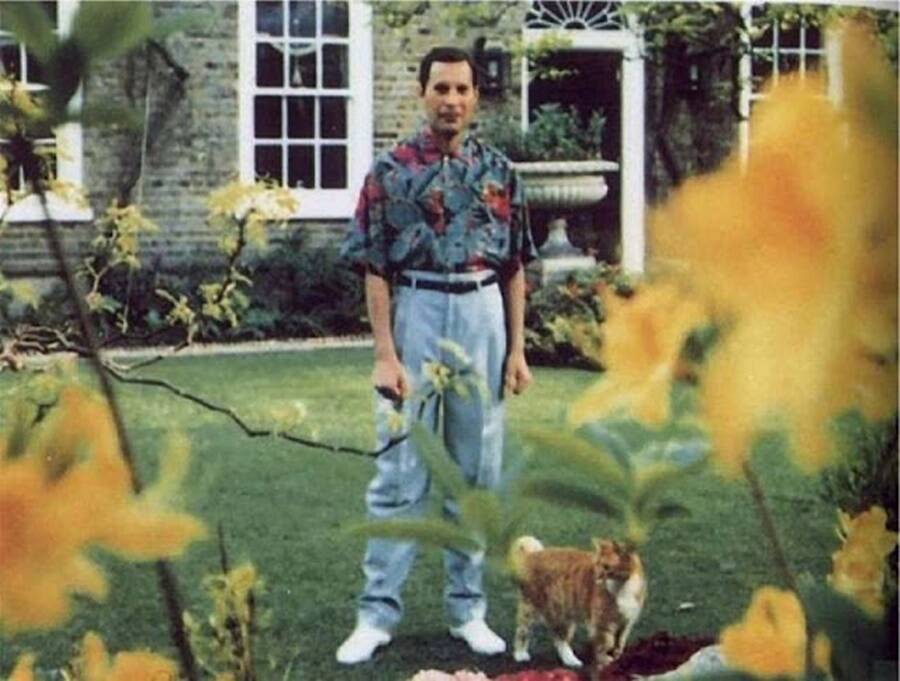 1 of 14
Freddie Mercury's love of cats is said to have started after his fiancé Mary Austin brought home a pair of cats. The couple named them Tom and Jerry. myfairymeddows/Twitter
2 of 14
Mercury had 10 cats in total — Dorothy, Tiffany, Tom, Jerry, Delilah, Goliath, Lily, Miko, Oscar and Romeo. They all lived with him in his Kensington mansion known as Garden Lodge.myfairymeddows/Twitter
3 of 14
The singer with his cat Tiffany, who was a gift from his ex-fiancé Mary Austin. During the day, the cats ran around the grounds and prowled outside the property at night.mental_floss/Twitter
4 of 14
Another one of Mercury's favorite cats was a tortoiseshell named Delilah. The song "Delilah" on Queen's 1991 album Innuendo was about her.myfairymeddows/Twitter
5 of 14
Freddie Mercury with Goliath (center) and Delilah, who were brought into the Garden Lodge pack around the same time.myfairymeddows/Twitter
6 of 14
"Freddie treated the cats like his own children," Mercury's longtime boyfriend Jim Hutton (left) wrote. "He would constantly fuss over them, and if any of them came to any harm when Freddie was away, Heaven help us."myfairymeddows/Twitter
7 of 14
The rocker poses with cast members of a Japanese production of the musical Cats during a visit to Japan.historyandfacts/Twitter
8 of 14
Freddie Mercury's cats enjoyed a pampered life complete with freshly-prepared chicken and fish for each meal. They also received gifts from Queen fans who knew about Mercury's feline obsession.myfairymeddows/Twitter
9 of 14
Mercury poses in this notorious silk waistcoat covered in cat print. It was a present from a friend who had Mercury's cats hand-painted onto it. The singer wore it in the Queen music video These Are The Days of Our Lives.Twitter
10 of 14
In one of his last interviews, Freddie Mercury told journalist David Wigg that he had willed all his assets to his ex-fiancé, Mary Austin, and his cats. myfairymeddows/Twitter
11 of 14
"Freddie became frantic, and in deep despair, he hurled a beautiful Japanese hibachi [grill] through the window of the guest bedroom," his boyfriend Hutton recalled after one of the cats went missing. The singer's fury quickly subsided when the cat reappeared later. myfairymeddows/Twitter
12 of 14
In the liner notes of his 1985 debut solo album Mr. Bad Guy, Mercury wrote: "This album is dedicated to my cat Jerry — also Tom, Oscar, and Tiffany, and all the cat lovers across the universe — screw everybody else!"myfairymeddows/Twitter
13 of 14
This photo is allegedly one of the last-known photos taken of Freddie Mercury. It was captured by his partner Jim Hutton in the backyard of his home. To his right, you can see one of his beloved cats. Reddit
14 of 14 He was a rock'n'roll icon as the frontman for the now-legendary rock band, Queen. But Freddie Mercury loved cats almost as much as he loved performing for live audiences.

Freddie Mercury's cats, of which he had 10, were completely different from one another, but all were deeply adored by the singer. He pampered the felines and treated them like his own children, and he even gave them each Christmas gifts every year.

Even when he went on tour, Freddie Mercury's cats were well taken care of and the singer was sure to call home and demand to speak with them.

His love for cats ran so deep that it seeped into his artistry; he dedicated his 1985 solo album to his bevy of cats and wrote a song about his "little princess," or his favorite feline Delilah. The song named was included on Queen's last album, Innuendo.

Indeed, it seems that the iconic Mercury was equally known for his incredible voice, killer compositions, and flamboyant stage presence as he was for his love of felines.

Freddie Mercury's Cats Were 'His Children' 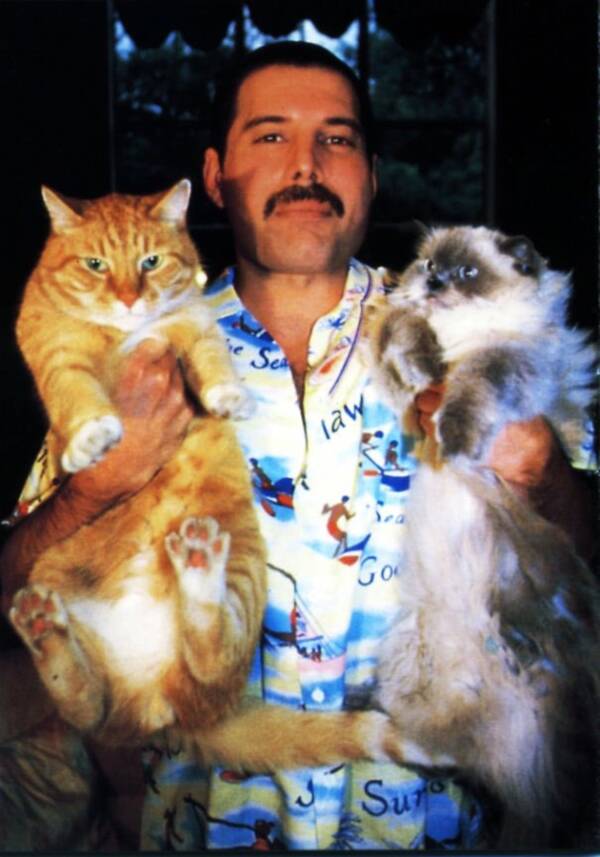 myfairymeddows/TwitterFreddie Mercury and two of the 10 cats he raised at the Garden Lodge.

In the early 1970s, Queen and their frontman Freddie Mercury were still relatively unknown names in music. But following the release of their 1973 debut album Pre Ordained, they began to get some traction in the mainstream music press, with Rolling Stone hailing them as the natural successors to Led Zeppelin's heavy metal throne.

But the release of Queen's debut album would also mark the time that Mercury would meet the first of his greatest loves: his cats.

His former fiancé, Mary Austin, was the first to bring home a pair of cats, who the couple cheekily named Tom and Jerry after the Hanna-Barbera cartoon characters of the same name.

Though he owned a few properties around the world, the rocker's favorite abode remained his Garden Lodge mansion in Kensington, England, where all his fur-babies stayed while he went away on tour.

Freddie Mercury's cats lived a pampered lifestyle. Their meals consisted of freshly-prepared chicken and fish. Each cat also got its own stocking full of kitty toys and treats every Christmas.

Jim Hutton, Mercury's boyfriend of seven years, wrote about the singer's obsession with his pets in his memoir, Mercury and Me:

"Freddie treated the cats like his own children. He would constantly fuss over them, and if any of them came to any harm when Freddie was away, Heaven [help] us. During the day, the cats had the run of the house and grounds, and at night one of us would round them up and bring them inside."

Hutton recalled one instance when one of the cats, a black male cat named Goliath, went missing.

"Freddie became frantic, and in deep despair, he hurled a beautiful Japanese hibachi [grill] through the window of the guest bedroom," Hutton wrote.

But Mercury's mood quickly changed after the cat reared its fuzzy head again. "Freddie was over the moon... for five minutes or more he poured his attention on the kitten, cuddling and stroking him," Hutton revealed.

"Then, like a mother, Freddie scolded the cat, shouting and screaming at tiny Goliath for leaving Garden Lodge. The dark ball of fur just sat there, listening calmly to Freddie's outburst and purring loudly."

Freddie Mercury's love for his cats was, arguably, the deepest love he ever felt in his life. During one of his final interviews, Mercury divulged the contents of his will, stating "I'm leaving it all to Mary [Austin] and the cats."

His affection for his cats was subtly portrayed in the Queen biopic Bohemian Rhapsody.

The singer's obsession with his feline companions didn't stop at home — Freddie Mercury's cats also had an influence on his music.

There's no better example of this furry influence than on 1985's Mr. Bad Guy, which was the "Tie Your Mother Down" singer's debut album. It was unironically dedicated to Freddie Mercury's cats.

"This album is dedicated to my cat Jerry — also Tom, Oscar, and Tiffany, and all the cat lovers across the universe — screw everybody else!" read the record notes.

Unsurprisingly, Queen fans began sending the rock star gifts for his cats after that dedication. Mercury, too, never failed to shower his cats with attention even when he was away.

"He'd get to a hotel, we'd dial through and he really would talk to his cats," wrote Peter Freestone, the singer's live-in personal assistant, in his book Mister Mercury. "Mary [Austin] would hold Tom and Jerry in turn up to the receiver to listen to Freddie talking. This continued throughout the years with [other] feline occupants of his houses."

But out of all his cats, Delilah — a tortoiseshell-colored female — was undoubtedly his favorite among the Garden Lodge pack.

Delilah, which was about Mercury's favorite cat, was featured on the 1991 Queen album Innuendo.

"Delilah was Freddie's favorite and the one he'd pick up and stroke the most often. When Freddie went to bed, it was Delilah he brought in with us. She'd sleep at the foot of the bed, before slipping out for a night-time prowl," Hutton wrote.

As Freddie Mercury's favorite cat, Delilah had the distinct honor of having a song written for her. His bandmates reportedly hated the song — though its subject matter may have been a contributing factor — but they begrudgingly indulged their frontman in recording it anyway.

"Delilah" was featured on Queen's 1991 studio album Innuendo, which turned out to be the last album Mercury recorded. Later that same year, the legendary rocker died of AIDS-related bronchial pneumonia at the age of 45.

The love Freddie Mercury had for his cats became a beloved factoid among fans long after his passing. Photos of Freddie Mercury's cats being cuddled and doted upon give us a warm, fuzzy feeling akin to what's described in Delilah's song lyrics: "You make me smile when I'm just about to cry. You bring me hope, you make me laugh – and I like it."

After learning about the many cats of Freddie Mercury, take a look at some more famous pets, like the celebrity dogs of Carrie Fisher and Frank Sinatra. Then, explore some of history's biggest music festivals, from Woodstock to Queen's legendary performance at Live Aid.