Jim Hutton and Freddie Mercury enjoyed seven love-filled years together before the latter died of AIDS-related complications on November 24, 1991. 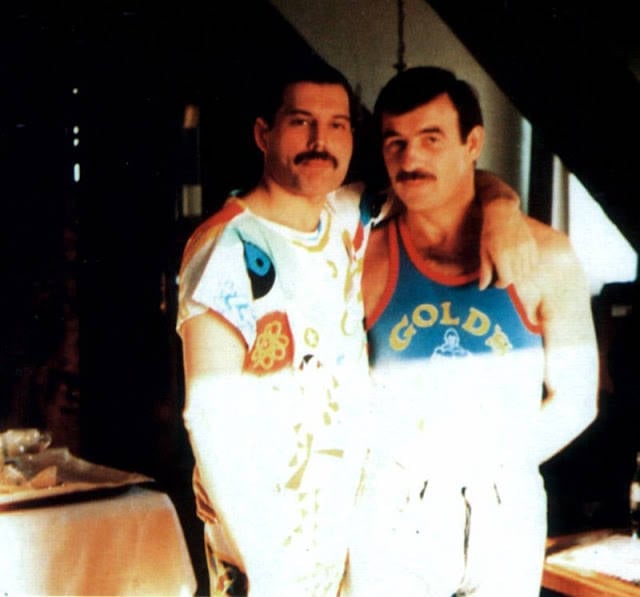 Vintage EverydayFreddie Mercury and Jim Hutton remained a couple until the singer’s untimely death in 1991.

Jim Hutton’s first meeting with Freddie Mercury in March 1985 was inauspicious, to say the least. In fact, Hutton initially turned Mercury down. But after finally connecting — and despite both plenty of subsequent adversity and a tragic ending to their story — this pairing was, for both men, the relationship of a lifetime.

Until the Queen singer’s death in 1991, Jim Hutton and Freddie Mercury lived together as partners and exchanged wedding bands although they weren’t legally married. This is their poignant story of love and loss.

Freddie Mercury’s rockstar status held little clout with Jim Hutton the first time the pair met. Hutton, born in Carlow, Ireland in 1949, was working as a hairdresser and failed to even recognize the singer. Although the 2018 film Bohemian Rhapsody depicts their first encounter as consisting of flirtatious banter when Hutton comes to help clean up after one of Mercury’s parties, in reality the two first met at a London club in 1985 — and it was far from an instant attraction.

Hutton, who was already seeing someone at the time, refused Mercury’s offer to buy him a drink at the gay club Heaven. It wasn’t until fate brought them together at the same spot 18 months later that the two really connected.

The two began dating soon after their second encounter and Hutton moved into Mercury’s London home, Garden Lodge, not even a year later.

Of course, dating a celebrity was not without its trials for Hutton. He recalled how one day they had a huge fight after he saw Mercury leaving Heaven with someone else, which the singer claimed he had done just to make his partner jealous. Things came to a head, however, after Hutton then saw Mercury leaving his apartment with another man, and “told him he had to make his mind up.”

Mercury responded to the ultimatum with a simple “OK.” Jim Hutton explained that “Deep down I think that he wanted to be secure with someone who was down to earth and not impressed by who he was.”

Once together in earnest, the couple’s home life was, in fact, much more mundane than might be expected by the flamboyant star’s legions of fans. On stage, Mercury was the ultimate showman who would electrify crowds. At home, Hutton reminisced, “I’d get in from work. We’d lie together on the sofa. He would massage my feet and ask about my day.” 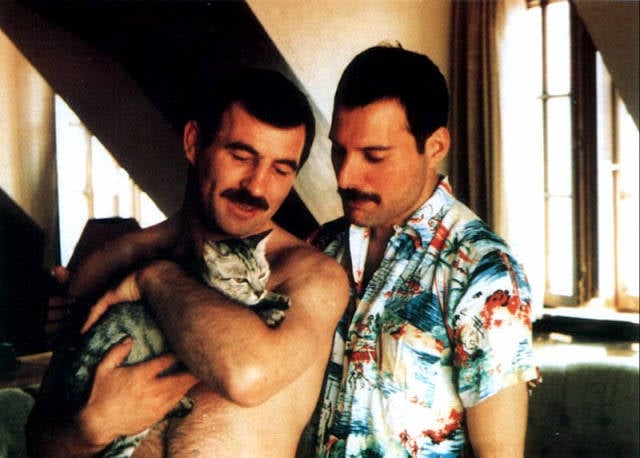 Vintage EverydayHutton and Mercury at home with their cat.

What started with a drink at a club would turn into a relationship that lasted until the end of Mercury’s life, although it remained a secret to the last. Mercury never publicly came out, nor ever even told his family about his homosexuality. Jim Hutton was unbothered by this, explaining, “he might have worried about how coming out would have affected him professionally but he didn’t say that. We both thought our relationship, and being gay, was our business.”

Although gay marriage was nearly two decades from being legalized in the U.K., both men wore wedding rings as symbols of their commitment. 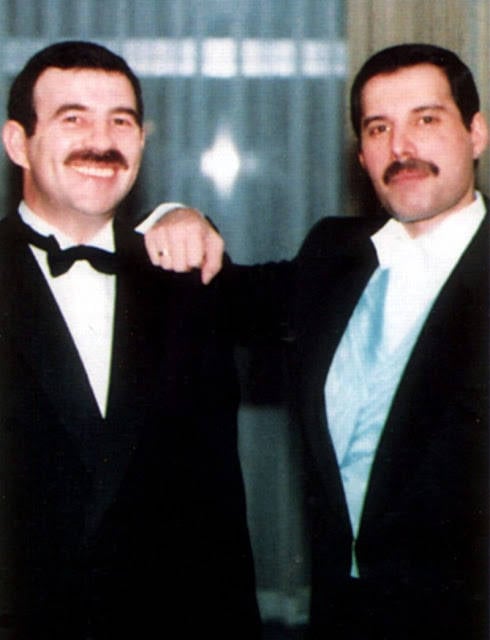 Vintage EverydayHutton and Mercury wore gold wedding bands as a symbol of their commitment.

Jim Hutton and Freddie Mercury’s relationship was cut tragically short by the singer’s death from AIDS in 1991.

Mercury was first diagnosed with the disease in 1987, at which point he told Hutton, “I would understand if you wanted to pack your bags and leave.” But Hutton wasn’t about to abandon his partner just because their carefree days had come to an end, and he replied, “don’t be stupid. I’m not going anywhere. I’m here for the long haul.”

Although Jim Hutton helped nurse Mercury through private treatments at home, the fight against AIDS was still in its infancy in the late 1980s. The singer took the drug AZT (which was approved by the FDA in 1987 but soon proved ineffective at treating HIV on its own) and refused to let his illness prevent him from living his life (he even filmed the music video for “Barcelona” against his doctor’s wishes), but Hutton and his friends noticed he was slowly wasting away. 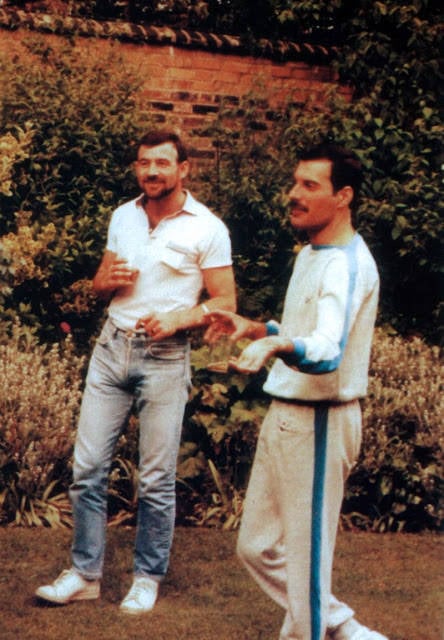 Vintage EverydayMercury and Hutton’s relationship was cut tragically short after Mercury was diagnosed with AIDS.

Hutton later admitted that he was perhaps in denial of Mercury’s steadily deteriorating condition and that he “noticed how skeletal he’d become only on the morning of his last birthday.” Hutton also suspected that Mercury could sense his own end was near and that the star “decided to come off his AIDS medication three weeks before he died.”

A few days before Mercury passed away, he wanted to leave his sickbed and look at his paintings, so Hutton helped him downstairs, then carried him back up again. “I never realized you were as strong as you are.” Mercury declared. It would be the couple’s last real conversation. Freddie Mercury passed away from bronchial pneumonia as a complication of AIDS on Nov. 24, 1991 at the age of 45. 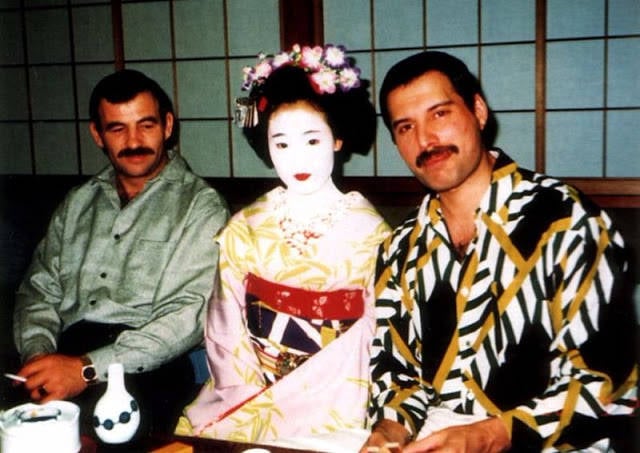 Vintage EverydayHutton was devastated by the loss of his partner.

When Mercury contracted the disease, there was still quite a strong public stigma attached to AIDS. He never even confirmed his diagnosis until the very day before his death, when his manager issued a statement in Mercury’s name.

Jim Hutton maintained that Mercury himself would never have wanted the truth made public since “he wanted his private life kept private.” Hutton was also sure that his response to critics insisting he could have helped the gay community at large by coming out and being honest about the disease would have been “f**k them, it’s my business.” 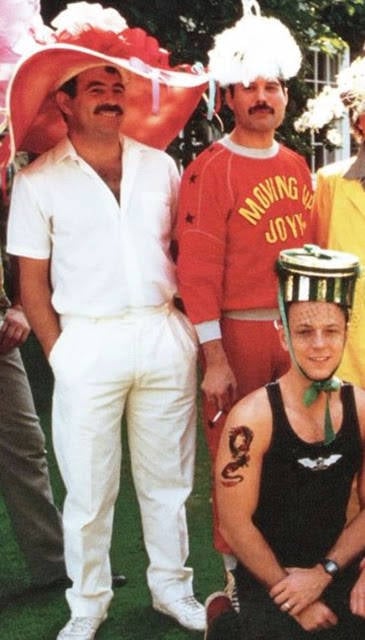 Vintage EverydayHutton and Mercury were famously silent about their private lives, although Hutton later wrote a touching memoir about their relationship.

Hutton was, in his own words, “devastated” after his partner’s death and went “absolutely crazy.” Mercury had bequeathed Hutton £500,000 (about $1 million today), but he had left Garden Lodge to his friend Mary Austin, who gave Hutton three months to clear out. Jim Hutton went back home to Ireland, where he used the money Mercury had left him to build a home of his own.

Jim Hutton himself had been diagnosed with HIV for the first time in 1990. He didn’t tell Mercury until a year later, to which the singer simply exclaimed “bastards.” In 1994, he published the memoir Mercury and Me, partially, as he explained, as a way to help overcome his lingering grief.

Jim Hutton himself passed away from cancer in 2010, shortly before his 61st birthday.

After this look at Jim Hutton and Freddie Mercury, take a look at 31 amazing photos depicting Freddie Mercury’s epic career. Then, read about the photo that changed the way the world viewed AIDS.