Usually, it’s archaeologists who make big discoveries. But in Başbük, Turkey, it was looters who stumbled upon an ancient fertility complex located beneath a local house.

According to a study about the find published in the journal Antiquity, authorities noticed “a rock-incised panel” beneath a two-story home in Başbük when they foiled a looting plot in 2017.

“Criminal investigations by the authorities discovered an artificial opening… cut through the paved ground floor of the house by looters,” the study’s authors explained.

Live Science reports that, following the discovery, police alerted the Şanlıurfa Archaeological Museum. Archaeologists from the museum then discovered that the narrow opening led into a vast, underground chamber, 98 feet in length, carved out of limestone.

“This chamber led into the upper gallery via a long, descending staircase,” the study’s authors explained. Thrillingly: “Erosion had filled the subterranean spaces with sediment, some of which was removed, revealing the wall panel.”

“The wall panel” is putting it lightly, however. What archaeologists had found appeared to be a series of stunning images made by a fertility cult in the first millennium B.C.E.

“As the dim light of the lamp revealed the deities,” study author Mehmet Önal, a professor of archaeology at Harran University in Turkey, said, according to CNN, “I trembled with awe as I realized I was confronted with the very expressive eyes and majestic face of the storm god Hadad.”

Indeed, the panel appeared to depict eight deities. Four, according to Live Science, were unidentifiable. The others included Hadad, the god of thunder, Atargatis, the goddess of fertility and protection, Sîn, the god of the moon, and Šamaš, the god of the sun.

The wall panel also offered a tantalizing peek into ancient life. According to CNN, the deities were carved during the time of the Neo-Assyrian Empire, a superpower that began in Mesopotamia and rapidly spread to engulf present-day Turkey. But the artwork displayed a combination of local and foreign influences.

While the names of the deities were written in Aramaic, the local language, they were created in an Assyrian style and embraced religious themes from both Syria and Anatolia (a peninsula that includes most of present-day Turkey).

“It shows how in the early phase of Neo-Assyrian control of the region there was a local cohabitation and symbiosis of the Assyrians and the Aramaeans in a region,” study author Selim Ferruh Adalı, an associate professor of history at the Social Sciences University of Ankara in Turkey said, according to CNN.

He added: “The Başbük panel gives scholars studying the nature of empires a striking example of how regional traditions can remain vocal and vital in the exercise of imperial power expressed through monumental art.” 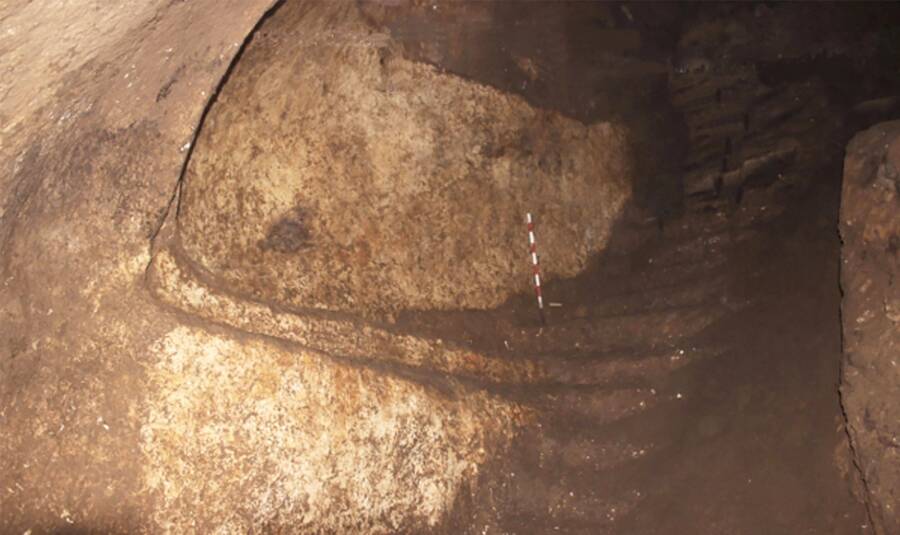 C. UludağLooters alerted archaeologists to the underground chamber, where they found a staircase.

Adalı believes the deities suggest the limestone complex was “the locus for a regional fertility cult of Syro-Anatolian and Aramaean deities with rituals overseen by early Neo-Assyrian authorities.”

Archaeologists also noted an inscription that appeared to reference the name “Mukīn-abūa.” According to Heritage Daily, he was a Neo-Assyrian official who served between 811 and 783 B.C.E. and who may have had control of the region.

The complex itself, Heritage Daily notes, may have been his attempt to win over locals. But if that’s the case, it doesn’t seem that Mukīn-abūa succeeded. The fertility complex is unfinished, which may mean that an event like a revolt cut its construction short.

“It may have been abandoned due to a change in provincial authorities and practices or due to an arising political-military conflict,” Adalı explained to CNN.

For now, there’s still a lot for archaeologists to learn about the fertility complex in Başbük, which was closed in 2018 because it was in danger of collapsing. Adalı and his team, however, are eager to return once it’s deemed safe to enter.

“As this was a rescue excavation, we could not fully study the site,” Adalı told Heritage Daily. He added: “Future excavations will eventually take place at Başbük and discover more of the mysterious underground complex.”

Then, perhaps archaeologists will learn more about the complex, the deities it contains, and what it represents about ancient political forces.