The Legend Of Lluvia De Peces: The Traditional “Rain Of Fish” That Befalls This Small Honduras Town — Or So The Locals Say

Yoro, Honduras is known for little besides some agricultural exports and, oh yeah, their yearly "rain" of small, silver, fish.

YouTubeLocals pick up the bounty from a fish rain or “lluvia de peces.”

Sometime in the 1850s or ’60s, the Spanish missionary Father Jose Manuel Subirana visited Yoro, Honduras. After he witnessed how poor and hungry the locals were, he prayed for three days and three nights that God would provide them with food. A dark cloud soon formed in the sky and in answer to his prayers, fish began to rain from the sky and feed the town. This was the first recorded instance of the phenomenon of lluvia de pesces or Rain of Fish — at least, that’s how the legend goes.

But according to the modern-day residents of Yoro, the fish rain is very much real continues to this day. Allegedly, smatterings of little silver fish rain from the sky at least once a year in the months of May or June. But do these accounts have scientific roots or more mythological ones?

Records Of The Rain Of Fish

Yoro is one of 18 departments in Honduras. The northern-central region is for the most part impoverished. It has fertile valleys and is largely known for producing grain. But Yoro is most infamously known for its alleged fish rain.

The locals say that the Rain of Fish happens every year, sometimes more than once, at the end of the spring. The “lluvia de peces” (literally, “rain of fish”) only occurs after a heavy and devastating storm — that is, when everyone is huddled inside. But when the storm passes, the villagers know to eagerly grab their baskets and head into the streets where sardine-like fish have been littered. Weirder still, those fish have been found to not even be indigenous to Yoro’s local waterways.

The villagers hold that the fish must have come from none other than the sky in a miraculous show of divine intervention. “It’s a miracle,” one local reported. “We see it as a blessing from God.”

Indeed, for many, it is a blessing as it is the only time of year that they are able to afford and eat fish.

Poverty is still prevalent in the region. Families live in small mud-brick homes. For some, whose usual diet consists of corn, beans, or other crops they have grown themselves, this is the only time of year they get to eat fresh seafood. For them, the Rain of Fish is, indeed, a miracle.

“It is a secret that only our Lord knows. It’s a great blessing because it comes from our skies.”

The Science Behind The Miracle

In the 1970s, a team of scientists from National Geographic were fortuitously on assignment in Yoro when they experienced the Rain of Fish.

The team didn’t witness the “rainfall” per se, but they were able to observe the fish on the ground following a large storm. From this, they provided what is the most likely explanation for the so-called annual phenomenon.

Curiously, the team realized that all of the washed-up fish were completely blind. The scientists hypothesized, then, that the fish must live in underground rivers or underwater caves where their inexposure to light had rendered them blind. They figured then that the intense rainstorms and subsequent flooding would have forced the subterranean fish above ground.

Another theory to explain this rain of fish posits that waterspouts are responsible.

Waterspouts are funnel-shaped clouds that form over bodies of water and rotate around an axis point like a whirlwind or a tornado. The waterspout sucks condensation into the air and they are powerful enough to lift small animals from the water and then carry them onto the mainland. This theory is thin, though, as waterspouts aren’t known to be able to carry fish long distances and the fact that the fish that flood Yoro’s streets aren’t from their native waterways. 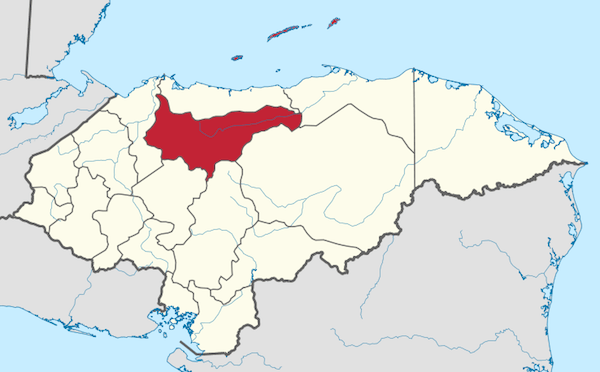 The fish could possibly come from the Atlantic Ocean, more than 100 miles away, which is way too far for a waterspout to have traveled with them in tow.

“Fish rain” or “animal rain,” has been reported in other parts of the world too, including Mexico, China, Thailand, and Australia. Fish and frogs are most common, but there have also been reports of spiders, birds, snakes, mice, and jellyfish.

There are no photographs of the phenomenon taking place and this is because, according to the residents, no one would dare go outside during such serious weather. So while there is no photo evidence of the fish rain as it’s happening, there are photos and videos of the strange, slimy aftermath.

Indeed, considering the lack of witnesses to attest to actually having seen the fish fall from the sky, it seems flooding rivers or underwater caves may be the most logical explanation for why all these little, blind, fish have appeared on the streets of Yoro after heavy rain the last 100 or so years. But this explanation, of course, is far less fun for the residents.

Whether the people of Yoro don’t know much about these scientific justifications for their lluvia de peces, or whether they just don’t care, the community continues to take immense pride in their uncanny local tradition.

“When we identify ourselves, we say, ‘I’m from the fish rain place,'” Luis Antonio Varela Murillo, a man who has lived in Yoro his whole life once told the New York Times.

Every year the town, which has a population of about 93,000, has a festival to celebrate the Rain of Fish. The date depends on the first major rainfall. The subsequent activities include a carnival, a parade and a competition amongst the women for the title of Senorita Lluvia de Peces — or, Miss Fish Rain. The winner will ride one of the parade floats dressed as a mermaid.

Many of the locals’ explanation for the Rain of Fish remains close to the story of Father Jose Manuel Subirana in the 19th century.

Locals are prohibited from selling the catch as the fish are believed to be a blessing of the lord. Instead, the community shares. Those who collect more fish than others redistribute some of their catch to families who didn’t make it in time to the streets and fields.

The remains of Subirana are buried on Yoro’s central square in the city’s main Catholic Church. The spiritual wonderment of his tale, and the generous spirit he represented to the people of Yoro, clearly lives on.

After this look at the lluvia de peces, or fish rain, check out the weirdest and most interesting events in history as well as some of the most bizarre creatures that live in the ocean.