These 3,000-year-old footprints belonging to an Egyptian child were found at the bottom of a mortar pit. 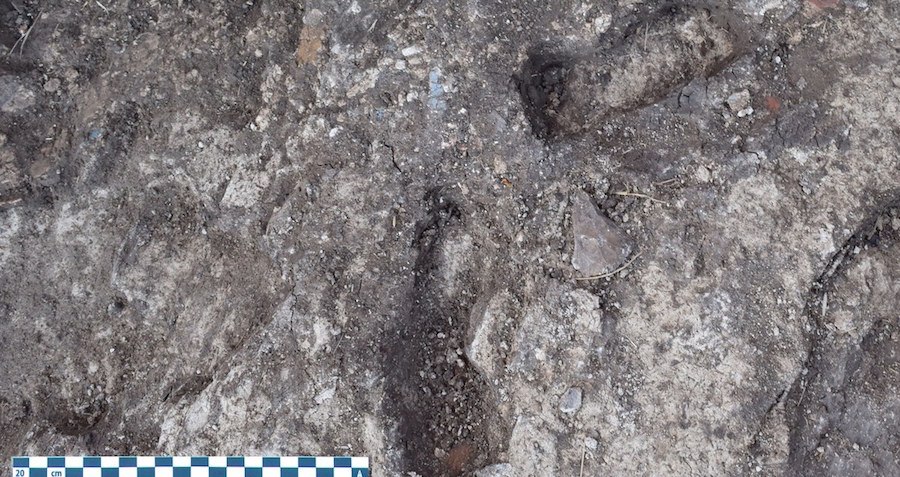 When we think of Ancient Egyptian houses of worship, entombed pharaohs and nobility — and perhaps the slaves who built the temples — often come to mind as the buildings’ primary inhabitants. But finds from a recent archaeological dig have revealed that children may have set foot in these buildings, too.

Archaeologists from Germany’s Roemer-Pelizaeus Museum have found 3,000-year-old footprints belonging to an Egyptian child in an enormous building complex at Pi-Ramesse. The city was Egypt’s seat of power during King Ramses II’s reign.

“[The building is] truly monumental,” Mahmoud Afifi, head of the Ancient Egyptian Antiquities department, told Seeker. “It is likely to be a temple or a palace.”

The archeologists found the footprints while excavating the building. A thin layer of muddy mortar encased the prints at the bottom of a large mortar pit.

“The children’s footprints had a size of [5.9–6.6 inches], thus relating to children between 3 and 5 years of age if one follows charts for modern children,” Henning Franzmeier, field director of the Qantir-Piramesse project, told Seeker.

“The differences in size are not big enough for us to clearly differentiate [if there was more than one child],” Franzmeier said. “And they are also not so well preserved that we could distinguish so far any other features of the feet.”

Nobody is quite sure why the children were there, but some have suggested that children could have been working at the site. In Ancient Egypt, children were considered their parents’ helpers, and could be given more work as they got older.

Others theorize that workers allowed royal children to play in the wet mortar.

No matter the reason, researchers avow that only further study will provide more insight into what kids were doing in the temple.

“We are planning to involve specialists which would analyze the footprints,” Franzmeier said, “and will hopefully find out a little more.”