The leader of a Missouri-based KKK organization was reportedly shot by his stepson, who was aided in the murder by the man's wife. 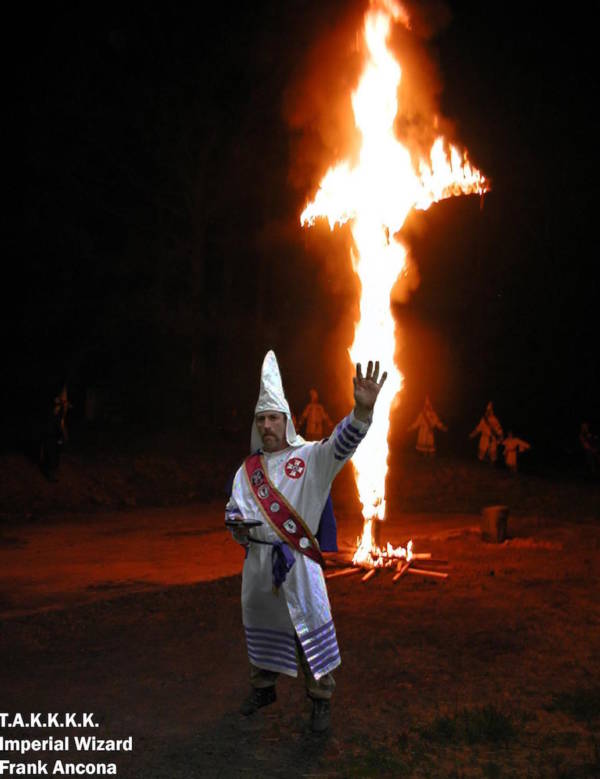 A photoshopped photo of Frank Ancona from the KKK’s website.

The body of Frank Ancona, a known KKK leader in Missouri, was found by a river on Saturday.

The wife and stepson of the 51-year-old “Imperial Wizard” have been charged with first-degree murder, tampering with physical evidence, and abandoning a corpse.

Jinkerson then drove Frank Ancona’s body to the nearby Big River, where a family on a fishing trip discovered him and alerted police. Ancona had been reported missing by his employer on Friday, after missing two days of work.

When police initially questioned Malissa Ancona about her husband’s absence, she insisted that he had left the state on a delivery job. She had also told police that he was planning on filing for divorce when he returned home.

After the body was discovered, Malissa’s story was obviously called into question.

Investigators taped off the Anconas’ home as the presumed scene of the crime and saw that Frank’s home safe had been broken into and that several guns had been removed.

Ancona’s car was found abandoned on a service road 30 miles away from his body. A burn pile was discovered near the car, leading officers to charge Malissa with trying to destroy blood evidence and altering a crime scene.

Frank Ancona had been a prominent member of the Traditionalist American Knights of the Ku Klux Klan, which is self-described as a “White Patriotic Christian organization that bases its roots back to the Ku Klux Klan of the early 20th century.”

The group’s site features a note from Frank Ancona next to a photo of him in a white hood photoshopped into an image of a burning cross.

“The media will tell you the KKK is dead, gone, irrelevant,” Frank wrote.

Next, read about the black man who convinced 200 racists to leave the KKK by befriending them. Then see if you knew that these famous political figures were actually members of the KKK.