How War, Gender Stereotypes, And The Economy Gave Birth To “G.I. Joe”

Turns out the real patriotic pursuit in the U.S. is turning a profit.

People love a good comeback story — especially if it involves an American icon.

This genesis of this particular revival story began in the place where some men do their best thinking: the bathroom.

The story goes that the presidents of Hasbro and Marvel entertainment introduced themselves to one another in the restroom at an early 1980s charity event.

During their conversation about their respective companies, the Hasbro exec confided in his new friend that the company was ready to reactivate the trademark on G.I. Joe – one of the most popular toys of the 1960s and 1970s — but was stuck on how to develop a new approach to the forgotten American hero.

That chance meeting at a urinal put the wheels in motion for one of the most lucrative joint ventures in toy and comic book history.

Every Hero Has An Origin Story

In 1964, the Hasbro toy company had plans to appeal to young boys with figures similar to the popular Barbie dolls. Marketing executives working for the company thought young boys would “never play with dolls” and made certain to never use the word doll during the development or marketing of their new line of posable soldiers.

The Hasbro team developed the phrase “action figure,” a term that would soon become the industry standard for any toys marketing to young males.

Dubbed “America’s movable fighting man,” the original figure prototypes each had individual names and served in the four branches of the U.S. military. Eventually, the action figures were all classified as G.I. Joes with the generic names of Action Soldier, Action Sailor, Action Pilot, and Action Marine.

The action figures were a success and millions of young American boys were enlisted into Joe’s army.

But by the late 1960s, the Vietnam War had ripped the country apart and sent many a young American military man home in a pine box.

In an effort to downplay the solider and war theme that initially defined the G.I. Joe toys, Hasbro renamed the line “The Adventures of G.I. Joe.”

These new Joes were rebranded as the Adventure Team and battled non-human foes like ecological disasters and wild animals. Instead of the typical soldier fatigues, the Action Team was dressed for adventures in the jungle, desert, and mountains.

Hasbro ceased all manufacturing of G.I. Joe action figures by the end of 1976.

The Vietnam War was long over by 1982, and “The Me Decade” of the 1970s gave way to the affluent 1980s and great personal wealth for many Americans. Thus, the time was right for Hasbro to bring back America’s greatest fighting heroes — but with a fresh new look.

Hasbro hired Tom Griffin and Joe Bacal, two young advertising executives, to give the G.I. Joe brand a makeover and thus reach a new young audience. The brash young duo developed an idea that had never been attempted before and has never been duplicated with the same success since.

Understanding Hasbro’s relationship with Marvel, Griffin and Bacal’s big idea naturally involved a comic book and cartoon series, believing these to be the perfect vehicles with which to sell toys.

Marvel and the marketing guys worked together on storyboards and a mocked up cover of the proposed comic book titled “G.I. Joe: A Real American Hero.” 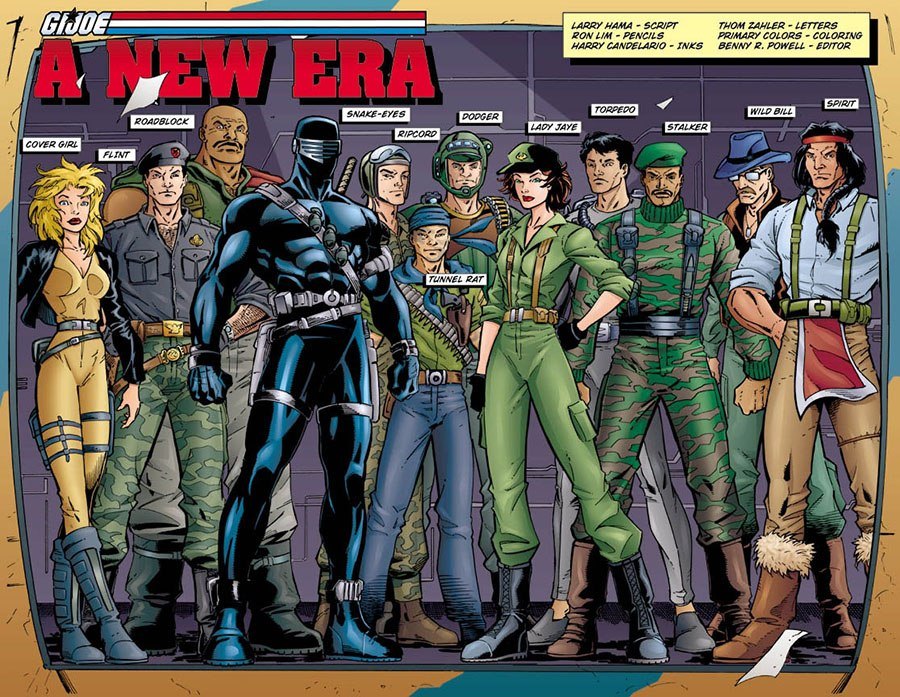 Executives from both companies agreed that G.I. Joe needed a new adversary. Civil uprising in the Middle East and the spread of Islamism gave way to the rise of terrorist organizations threatened by the American way of life.

Marvel proposed that instead of the Joes battling a specific country, they fight a terrorist organization hell bent on world domination. It was there that the Cobra organization was born.

Griffin and Bacal made their pitch to the Hasbro executive team for a 30-second TV ad. At the end of the presentation, the men played a demo track for the proposed score of the commercial. Hasbro was blown away by the idea, especially CEO Stephen Hassenfeld.

“You all found a way to bring Joe back,” Hassenfeld told Griffin and Bacal. “I’m going to tell my father.” Hassenfeld then allegedly drove to visit his father’s graveside later that afternoon.

The next plan of attack was a body makeover for America’s movable fighting man. The high price of oil — one of the key components in plastic manufacturing — at the time, made producing the original 12-inch figures of the ’60s and ’70s far too expensive.

Inspired by the success of the Star Wars and The Empire Strikes Back lines of action figures, Hasbro scaled down the size of G.I. Joe to 3 ¾ inches. In another stroke of brilliance, Hasbro also created figures and vehicles for the enemies of the Joes, an idea that wasn’t all that common at the time.

With the toys on the shelves and the comic book in every comic shop in the country, the finished commercial aired during Saturday morning cartoons in the spring of 1982:

From Print To Printing Money

With a best-selling comic book and top-selling toy line, Hasbro and Marvel were on a winning streak. That’s when Hasbro really began to tinker with the idea of using other mediums besides print and TV ads to sell toys.

Instead of a popular TV show launching a toy line, why couldn’t a toy come first and then have its small screen debut? What if a cartoon did all of the selling for the company?

Hasbro once again commissioned Marvel to produce animated TV commercials for their popular comic. The ads generated such a buzz around the toys that Marvel turned those commercial ideas into a five-part G.I. Joe mini-series in 1983 with a second five-part mini-series, The Revenge of Cobra, running in 1984.

By 1985, a full-fledged TV series was in the works. The series was written by the creator of both mini-series, Ron Friedman, a writer with an impressive resume that included shows like All In The Family, The Odd Couple and Wonder Woman.

The goal of the series was two-fold: reach the largest audience of young consumers as possible and act as a 30-minute advertisement masked as entertainment. Each episode made sure to make a different Joe the focus of the story and introduce an new vehicle or accessories that was already available in stores prior to the episode airing on TV.

The series ran in syndication for only one year but Marvel, with help from Sunbow Productions, produced 96 episodes between 1985 and 1986. Hasbro’s G.I. Joe toyline lasted from 1982 to 1994 and produced more than 500 figures and more than 250 vehicles and play sets.

G.I. Joe’s immense popularity spawned a litany of spin-off merchandising like posters, video games, board games and clothing. In 1985, Toy & Lamp and Hobby World magazines named G.I. Joe the the top-selling American toy of the year.

Next, learn how comic books have promoted some surprisingly progressive politics.