While removing discarded nets from the bottom of Germany's Gelting Bay, divers discovered a rare encryption device that the Nazis relied on throughout World War II. 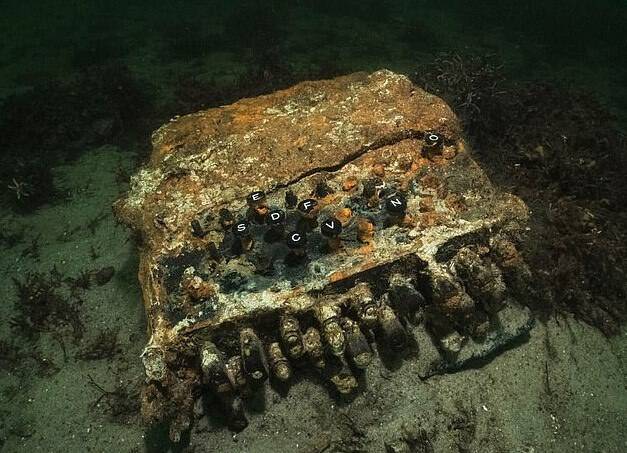 Submaris/Florian HuberThe Nazi encryption machine as it was found at the bottom of Gelting Bay.

What was supposed to be a routine dive on behalf of the World Wide Fund for Nature (WWF) proved historic when the team stumbled upon a rare Nazi Enigma machine from World War II.

Tasked with clearing the Baltic Sea of discarded fishing nets that endanger marine wildlife, divers were surprised when they found what appeared to be a vintage typewriter at the bottom of Gelting Bay in northern Germany.

The encryption device was one of many used by Nazi forces to send secret messages across Europe during World War II. According to Reuters, experts believe that this particular machine was intentionally thrown overboard from a scuttled submarine shortly before the Nazis surrendered to the Allies in 1945.

The remarkable find was certainly unexpected for Gabriele Dederer of the WWF.

“The WWF has been working for many years to rid the Baltic Sea of dangerous ghost nets,” she said. “We regularly find larger objects on which the nets get tangled underwater. Such so-called ‘hook-points’ are often tree trunks or stones. The Enigma is by far the most exciting historic find.”

Indeed, the machine is one of the most sought-after World War II artifacts of all time. 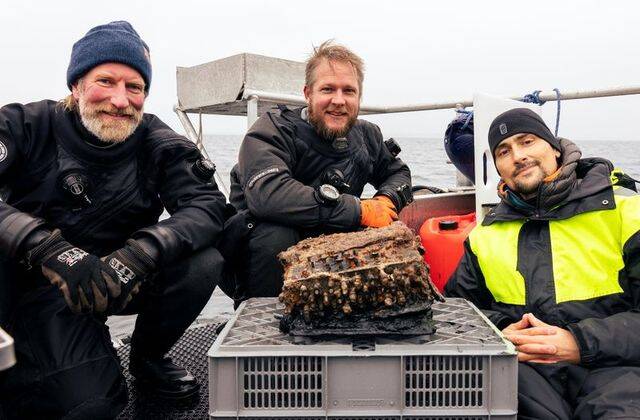 While the Enigma machine was used throughout World War II, it was actually designed by engineer Arthur Scherbius following the First World War. Intended as a commercial product, the machine was quickly absorbed by several national governments and militaries as it was considered a state-of-the-art encryption tool for its time.

As pioneers of the “Blitzkrieg” sneak-attack strategy, Nazi forces were desperate to keep their targets and times of attack as secret as possible, and the Enigma could ensure just that. Furthermore, the machine was remarkably portable even though it was practically as large as a typewriter, one needed only to train Nazi radio transmitters how to use it.

But the way that the Enigma worked was a rather impressive feat of engineering.

An informative World Science Festival explanation of how the Enigma machine worked.

The Nazis kept detailed codebooks that contained instructions for the Enigma’s operators on how to set the machine’s code wheels and plugs. These standards changed on a daily basis, and without them, the machines themselves were rather useless.

But where the Enigma machine was so successful was also where it failed. Because the machine only turned letters into different letters, tactful code breakers with some intel could infer which of the 25 other letters of the alphabet might have been used in place of the one they intercepted.

That is in part how genius British mathematician Alan Turing was able to crack Nazi codes for the Allies. Turing worked with a team out of Bletchley Park in Milton Keynes, England in order to crack the Enigma’s codes. At their peak, Allies decoded around 3,000 messages per day.

Turing’s decryption efforts led Allied forces to help the British Admiralty track down German U-boats during the Battle of the Atlantic and ultimately contributed to their success in the war. 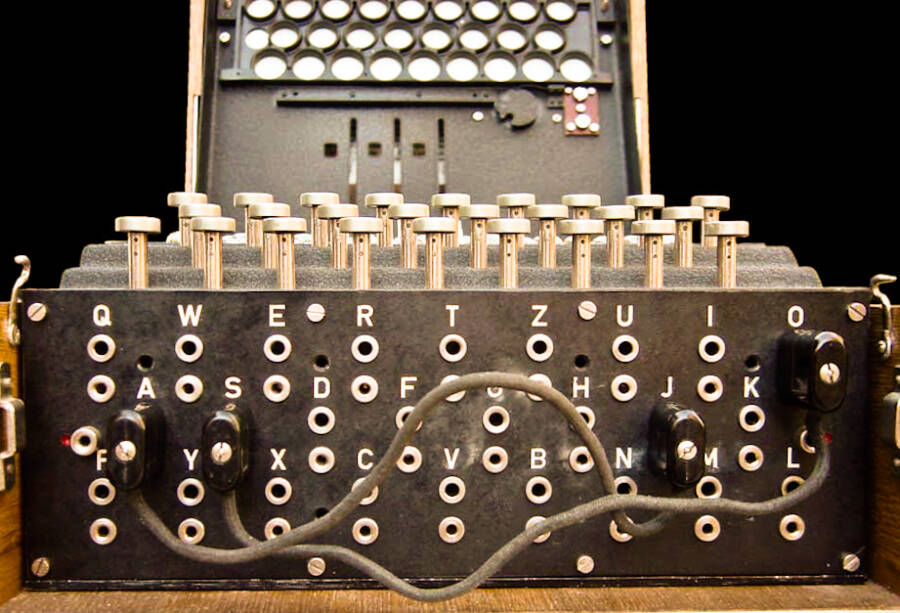 Wikimedia CommonsThe plugboard of the Enigma, with the pictured configuration having swapped two pairs of letters: A and J, and S and O.

Helping the WWF in their historic cleanup effort was Kiel-based company Submaris, which used sonar technology to locate the net that this strange device was caught on. Diver Florian Huber believes that the Enigma was sent to the depths on purpose in May 1945, when 47 Nazi U-boats were destroyed by their crews in order to prevent the Allies from seizing them.

“We suspect that our Enigma went overboard in the course of this event,” said Huber, adding that Enigma machines are “extremely rare” and that there are “only a few specimens… available in German museums.”

“As an underwater archaeologist, I have already made many exciting and strange finds,” he said. “However, I didn’t dream that we would once find an Enigma machine. It was a grey November day I will not forget so soon.”

As it stands, the vintage artifact has been handed over to the Museum of Archaeology in Schleswig for preservation.

The WWF, meanwhile, has launched a smartphone app that tracks the locations of suspected “ghost nets,” or discarded nets, for those good samaritans willing to help in their cleanup efforts. The WWF has also asked that anyone who finds historic objects in these nets to treat them with respect.

“Should further archaeological finds come up, we would like to point out that there is a legal obligation to report them, as this could be underwater cultural heritage,” said Dederer.