The map was generated using data collected by the Gaia telescope, located 930,000 miles from Earth. 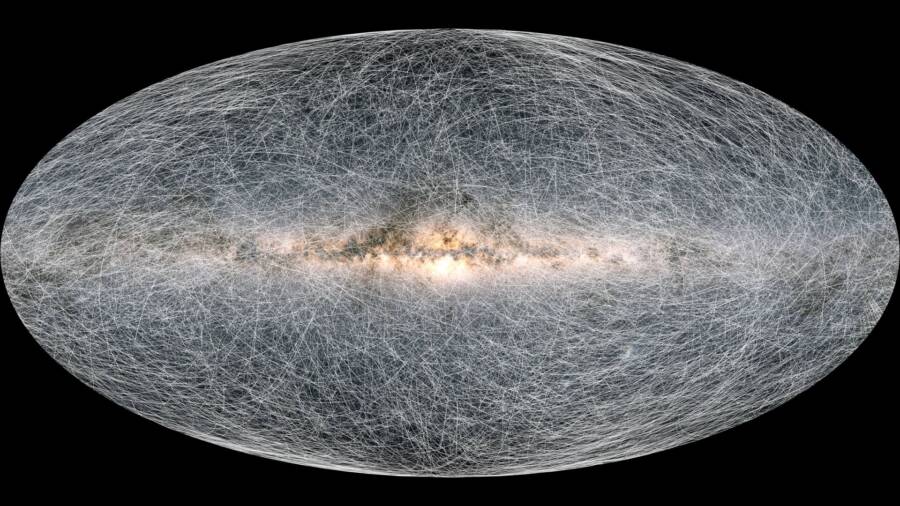 ESA/Gaia/DPACA map of the motion of 2 billion stars as they careen throughout the Milky Way.

In a feat of cosmic proportions, astronomers have generated the most detailed atlas of the Milky Way yet — and it’s in 3D.

Compiled from data gathered by the European Space Agency’s (ESA) Gaia observatory, which has been clocking the cosmos since 2013, the exhaustive star map will give astronomers clues as to how exactly our home solar system formed some 4.5 billion years ago.

The star atlas includes the positioning and movements of 2 billion known stars that dot our galaxy, including their coloring, brightness, and the first visual evidence of the acceleration of our solar system. What’s more, astronomers were also able to map the Milky Way’s neighboring galaxies. 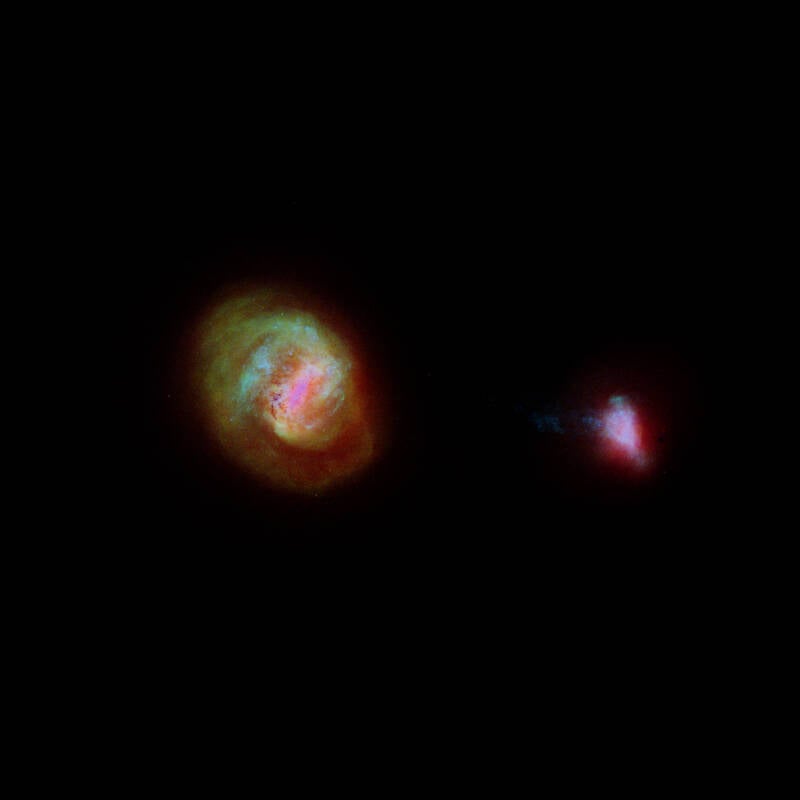 The Milky Way is a 13.5-billion-year-old disc of star matter and looking deeper into it reveals its past. Indeed, scientists were able to map the size and makeup of the galaxy as it was 10 billion years ago, simply by looking further into space.

The data also shows how the movement of stars on the outer edges of the Milky Way, known as the galaxy’s “anticenter,” hint at significant fluctuations in the galaxy’s makeup throughout the eons. 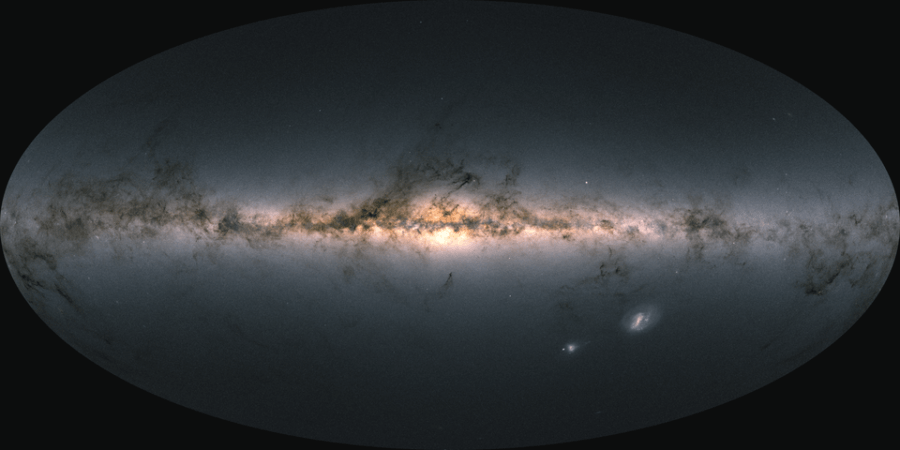 ESA/Gaia/DPACThis is a brightness and color map of the galaxy. Higher concentrations of stars are shown in more intense colors.

The movement of these stars also revealed that the Milky Way almost smashed into a neighboring galaxy known as Sagittarius.

Though the two didn’t collide, they did get close enough that the gravity in the larger Milky Way galaxy was able to distort or knock about some of the stars on the edges of the Sagittarius galaxy.

The ESA described this mini-showdown and its ripple effects as what happens when a “stone is dropped into water.” Scientists are currently confident that the Milky Way is in the process of consuming Sagittarius.

In total, Gaia has mapped 92 percent of the celestial bodies within 326 light-years of our Sun. The last census of our “solar neighborhood” took place in 1957 and mapped just 915 objects. It was updated in 1991 to include 3,803 objects, but it also only observed a distance of 82 lightyears from our sun, rendering this latest census the most exhaustive in human history.

Since its launch in 2013, the Gaia observatory has published three mind-bending press releases about the history of our universe. Since its last press release in 2018, the observatory has mapped over 100 million new stars in our galaxy. Its deputy scientist fittingly referred to the research as “a treasure trove for astronomers.”

The Gaia telescope, which is known as a “galaxy surveyor,” is positioned is about 930,000 miles from Earth facing the opposite direction from the sun. This positioning is optimal for data collection because it is balanced between the gravity of Earth and the Sun and is, therefore, able to remain still. This also means it can use less fuel in order to stay in place.

Also, because it is facing away from the Earth, the telescope doesn’t pick up any light interference from our home planet, making for a clear view of the cosmos. 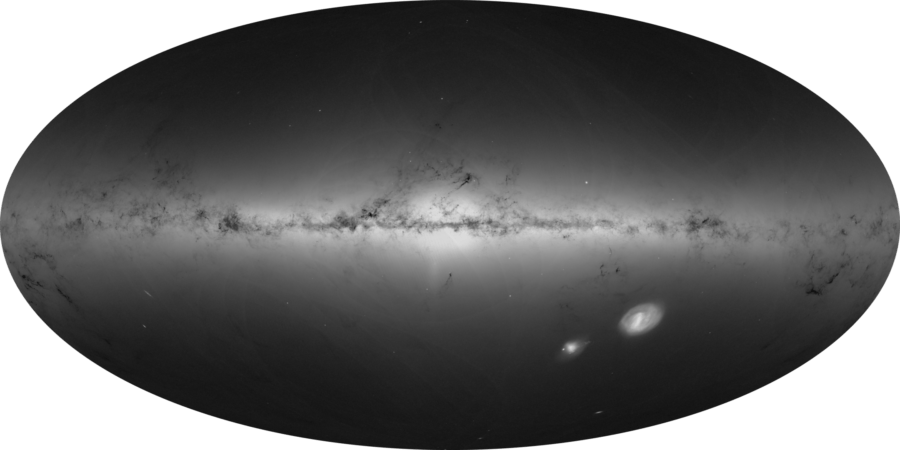 ESA/Gaia/DPACThis is a density map of the galaxy, where the brightest and most massive stars are whitest.

As groundbreaking as Gaia’s discoveries have been, the work is still incredibly difficult.

“Gaia is measuring the distances of hundreds of millions of objects that are many thousands of light-years away, at an accuracy equivalent to measuring the thickness of hair at a distance of more than 2000 kilometers,” said Floor van Leeuwen, an astronomer at the University of Cambridge’s Institute of Astronomy and UK Gaia DPAC project manager.

Astronomers aren’t disheartened by this challenge, however. As van Leeuwen added, “These data are one of the backbones of astrophysics, allowing us to forensically analyze our stellar neighborhood, and tackle crucial questions about the origin and future of our Galaxy.”

Gaia will continue its census of our solar neighborhood and beyond, painstakingly unraveling the history of our universe one star plot at a time. For now, though, we can use Gaiaga’s 3D model to observe our ancient cosmic history as no man has ever been able to before.

Next up, watch as a star the size of our Sun gets shredded by a supermassive black hole. Then, learn 29 space facts that prove life on Earth isn’t all that interesting.