This particular Enigma machine used to confound Allies with encrypted messages has virtually all its original components intact — save for a battery and one internal lamp. 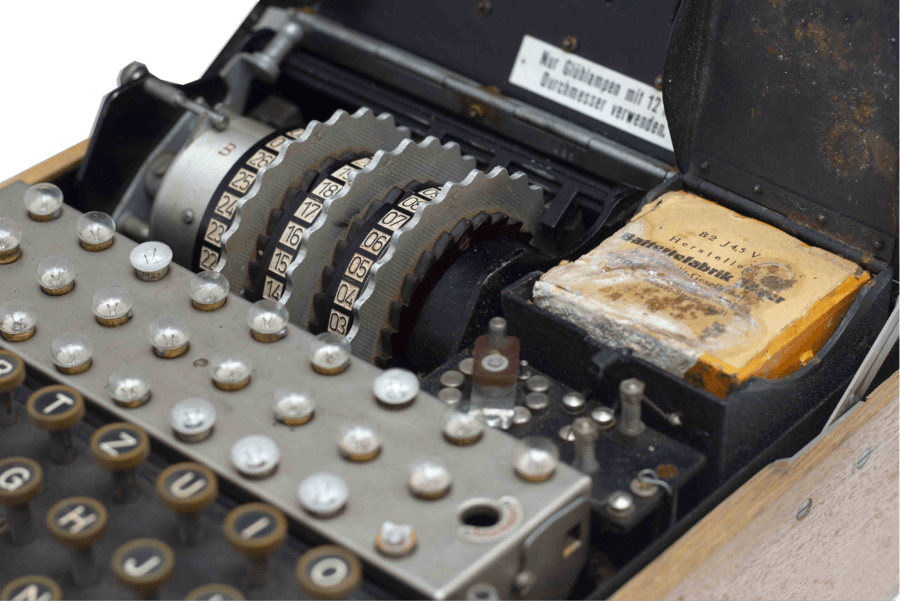 Nate D. Sanders Auction HouseThis German Enigma machine is in impressive condition, with only minor wear and tear after more than half a century.

A few years ago, somebody mistook a German Enigma machine for a mere WWII-era typewriter and sold it at a flea market for a pittance. Fortunately, it was eventually discovered for its historical value and sold for big money at an auction.

According to TechCrunch, yet another unit from the priceless Enigma series has found its way to auction. This particular item is described as “like new” with bidding starting at $200,000 at Nate D. Sanders Auctions today.

A previous auction sold a unit for around $20,000 last decade, with the flea market-derived unit going for $51,500 in 2017. Clearly, the passage of time has done nothing but ramp up the value for this former bane of the Allies in WWII — and for good reason. 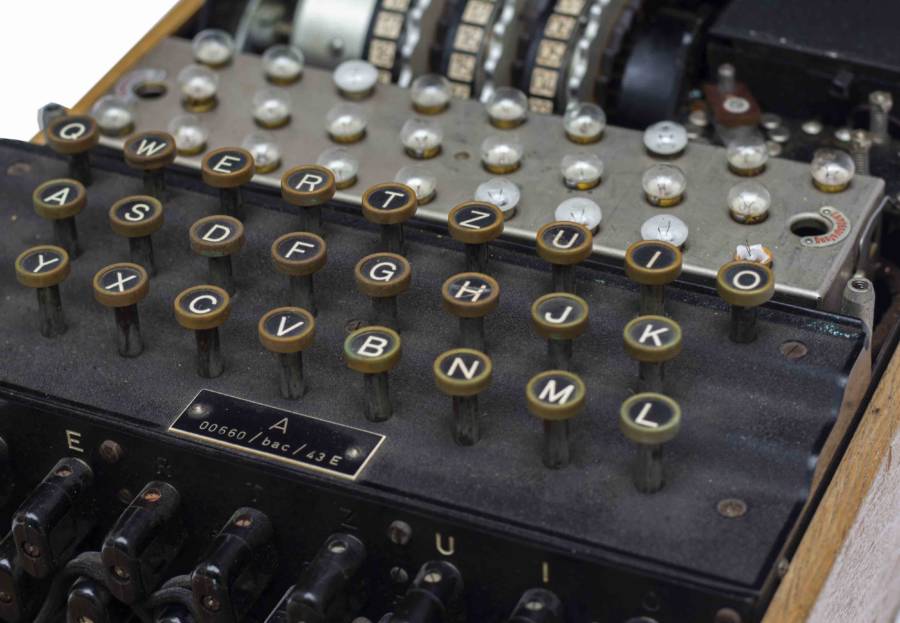 While the code-constructing device, or the Funkschlüssel, looks like nothing more than a vintage typewriter, these machines were actually a remarkable part of 20th-century history. Before the advent of digital data, surveillance, and online packet interceptions, war strategists and technicians had to decipher radio communiqués and crack codes created by the enemy to get an idea of their next moves and plan accordingly.

Enter the Enigma — a years-long headache that befuddled the Allies as the Nazis conquered Europe. Originally developed by engineer Arthur Scherbius, this series of portable machines used a set of rotors, a lamp board, keyboard, and a plugboard to create ciphers unreadable to the enemy. As such, it became imperative to decrypt the various codes used to communicate between Axis forces. Eventually, of course, famed British mathematician Alan Turing accomplished just that at Bletchley Park — home of the WWII Codebreakers in Milton Keynes, U.K. 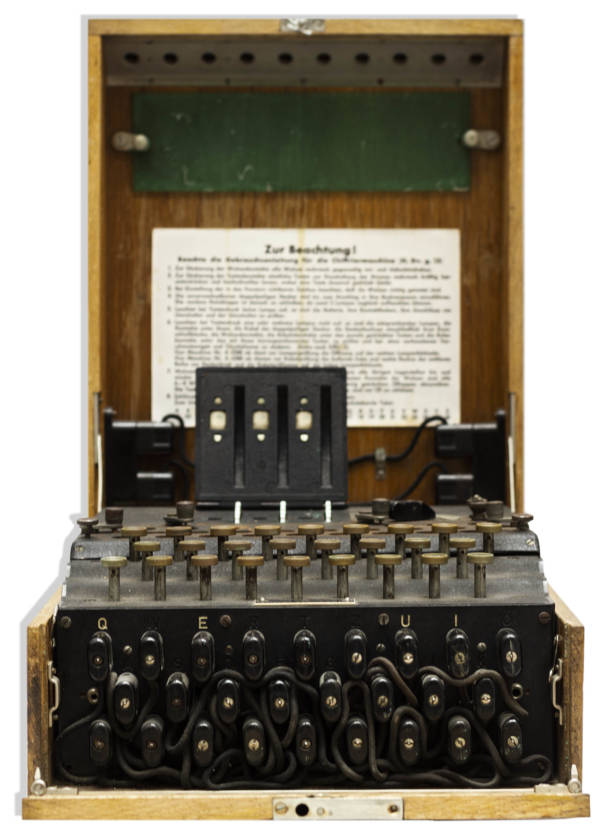 According to the Bletchley Park Museum, numerous models of the Enigma were produced. The lamp board above the typewriter matched one lamp to each letter. When an operator hit the plaintext key to recreate any given message they received, the corresponding lamp board letter lit up.

This allowed for messages to be sent in code which could then easily be deciphered by retyping them on the same machine elsewhere. With an increasing need to avoid surveillance as German war efforts began to rise, the German Wehrmacht adopted this device in the late 1920s.

The portable machine worked on a series of rotors that rotated every single time a key was pressed — thereby changing the cipher on a continuous basis, complicating the effort to keep up. On top of that, there was a plugboard on the device where pairs of letters were transposed. Together, those two systems within the Enigma machine produced a total of 103 sextillion possible pairs of six letters which could then be combined with some 17,000 different motor arrangements. The Germans felt this created so many different possible cyphertexts that the codes would be utterly unbreakable — and for a time, they certainly were. 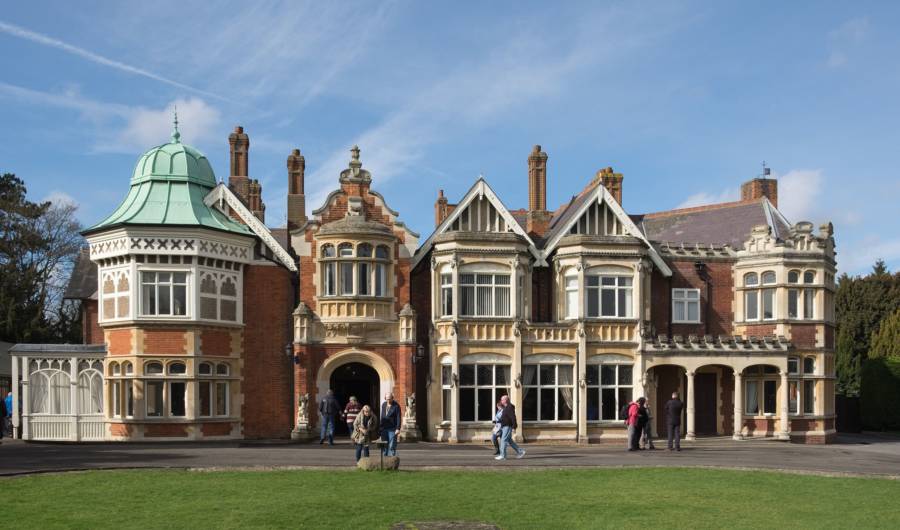 Wikimedia CommonsWWI Codebreaker Dilly Knox got a team together for the WWII Enigma effort which consisted of Knox himself, Tony Kendrick, Peter Twinn, Gordon Welchman, and Alan Turing.

As the notion of another Great War loomed on the horizon, the Poles decided to lend the British a hand. Polish mathematicians had solved codes of Enigma machines from the Germans as early as 1932 and were eager to stop Hitler at any cost.

With valuable research from the successes of the Polish, famous British WWI Codebreaker Dilly Knox established the Enigma Research Station in 1939. He was convinced that his efforts would succeed and he certainly got the right team together to do so.

Tony Kendrick, Peter Twinn, Gordon Welchman, and Alan Turing joined Knox in the top-secret Bletchley Park facility — a stable yard on the property. It was here that the first Enigma messages relayed during WWII were successfully broken. It was January 1940. The team realized that all the messages included the same sign-off which they eventually realized was “Heil Hitler.” From there, the team could work backward with those letters to undo and decipher the message.

Turing’s first decryption device in 1939 was called the Bombe (derived from Bomba, the name of a similar machine the Poles developed years prior, and coincidentally also the term for “bomb” in German). In 1940, he presented his first machine — named the Victory — to his Bletchley Park peers.

Hundreds of Victory machines were subsequently built to crack Enigma codes, which many have argued cut the war short by up to two years. Ultimately, this resourceful group of people contributed an enormous amount of invaluable effort to the fight against the Nazis. Their work may have saved hundreds of thousands of lives. 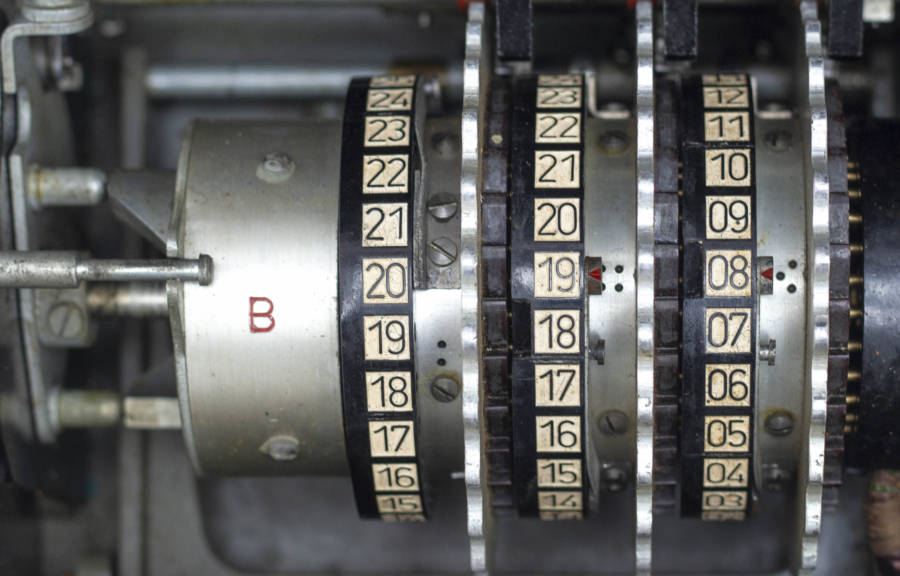 Nate D. Sanders AuctionsThe Nazis were ordered to destroy their Enigmas should an invasion from Allied troops be near. Only an estimated 250 still exist.

The Model M3 Enigma machine being auctioned off today is certainly representative of a fascinating and ingenious facet of war history and of Hitler’s defeat. During the war, German troops were instructed to destroy their machines lest they be confiscated by the Allies. When the war had ended Winston Churchill, too, decreed that any surviving Enigmas be destroyed. As such, only some 250 have survived to today.

Some Enigma machines worse for wear than others, although this particular unit is in impressively good shape. For instance, all but one interior light still functions. The original rotors have remained intact. The battery doesn’t work, of course, but that’s to be expected after more than seven decades have passed.

In other words, while there are likely more Enigma machines out there waiting to be recognized and consequently auctioned off, it seems unlikely that another one in as good a condition as this unit will surface anytime soon. The lucky winning bidder may soon own the most pristine piece of this bit of WWII history to date.

After learning about this nearly pristine Enigma machine, get angry looking at these 21 vile Nazi propaganda posters. Then, learn about the amber room: the golden chamber of the tsar stolen by Nazis.